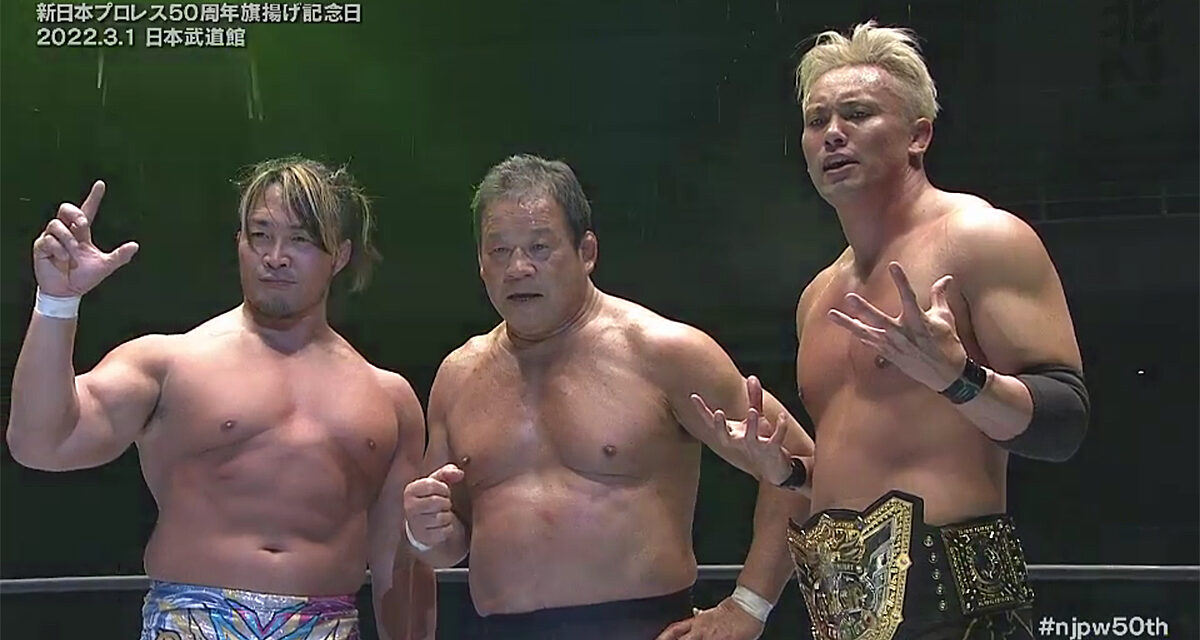 NJPW celebrated its 50 year anniversary with an all-star event at the Nippon Budokan arena in Tokyo today, a day before the start of the New Japan Cup.

In the main event it was Hiroshi Tanahashi and Kazuchika Okada versus the Suzuki-gun team of Minoru Suzuki and Zack Sabre Jr.

Joining The Ace and The Rainmaker was NJPW legend Tatsumi ‘The Dragon’ Fujinami, who wrestled in the very first NJPW match, was the innovator of the dragon sleeper and the dragon suplex and won the IWGP Heavyweight Championship six times. Both Okada and Tanahashi held the ropes open for Fujinami as he entered the ring. 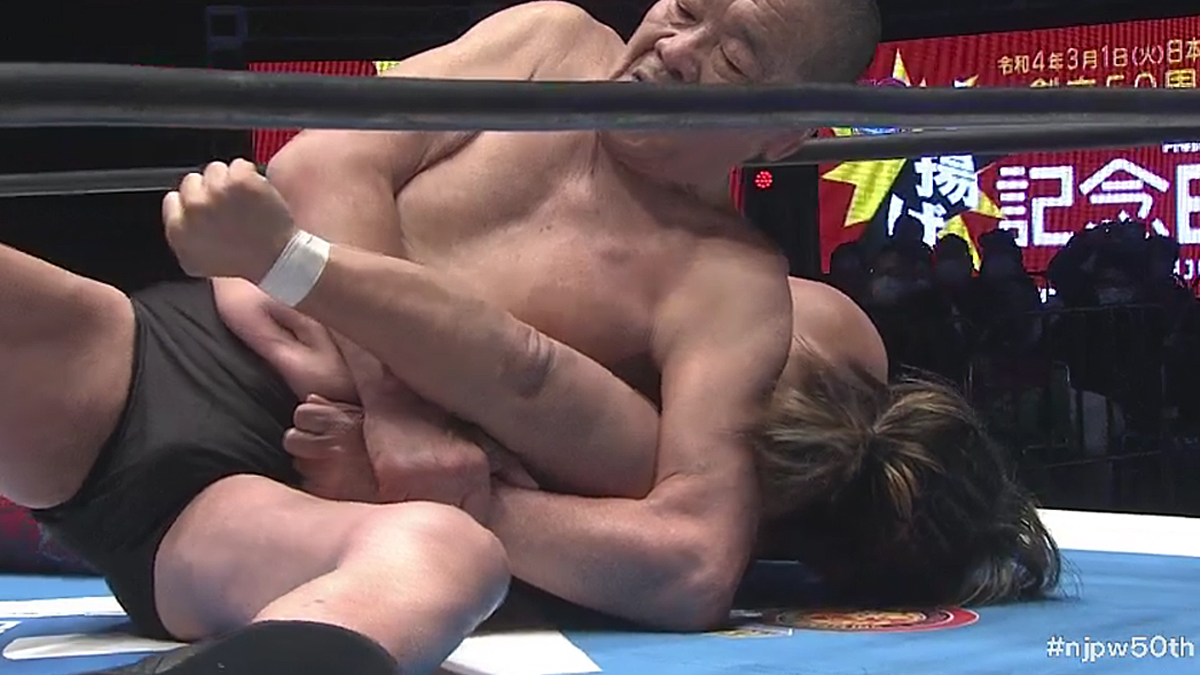 Fujiwara applies the move he made famous. Courtesy: NJPW.

72-year-old wrestling legend Yoshiaki Fujiwara joined Minoru Suzuki and Zack Sabre Jr. in his 3,091st professional wrestling match. In a rare show of respect from the heel, Minoru Suzuki held the ropes open for Fujiwara but true to form, refused to fist bump him later.

Okada and Sabre Jr. started things off exchanging holds in a segment of mat wrestling. Okada kicked out of wrist lock sending Zach across the ring where he tagged in Suzuki. Okada stayed in the ring until Fujinami tagged himself in. Fujinami took down Suzuki with a scissor lock, arm lock combination. Suzuki tried for a half crab but Fujinami reversed things into a heel hook of his own.

Having been schooled by a master, Suzuki thought about tagging in Fujiwara to face Tanahashi but decided against it. While Suzuki had The Ace in the ropes with an arm lock Fujiwara tagged himself in. Suzuki got into Fujiwara’s face. Fujiwara slapped him over and over. Suzuki returned fire causing the crowd to gasp. It wasn’t long before Fujiwara had The Ace down though on the mat with his world famous arm bar. 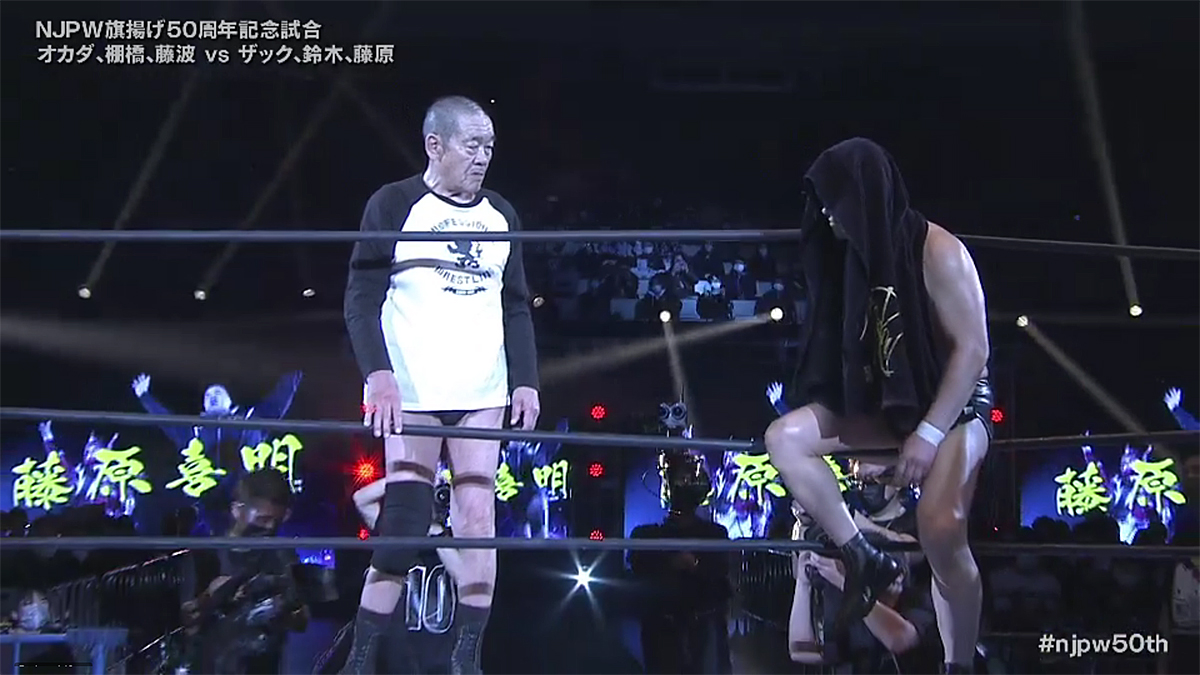 Later on, Fujiwara would return the favor by ignoring Suzuki’s outreached hand and tagging in Zach instead. Suzuki-gun would provide an iconic moment as they, along with Fujiwara, gave The Ace, Okada and Fujinami, Fujiwara arm bars simultaneously.

Okada would take home the win for his team with a drop kick on Suzuki, a Landslide and Rainmaker for the pinfall.

“With all the legends that are here I can feel the weight of the legacy of NJPW. I have spoken about how much responsibility I have to bear but I will continue to carry NJPW forward!” promised Okada speaking to the crowd after the match.

Okada recognized that Antonio Inoki couldn’t be in attendance but everyone in NJPW “walks the road that he paved for them”.

El Phantasmo gets the pin with Thunder Kiss ’86 on poor Taka.

CIMA pins Douki with his double knees from the top rope.

In a funny spot, Nagata and Kojima trap United Empire in two separate corners and give them the machine gun chops. Khan pins one of the Young Lions with his Eliminator.

Takagi puts Honma away with Last of the Dragon.