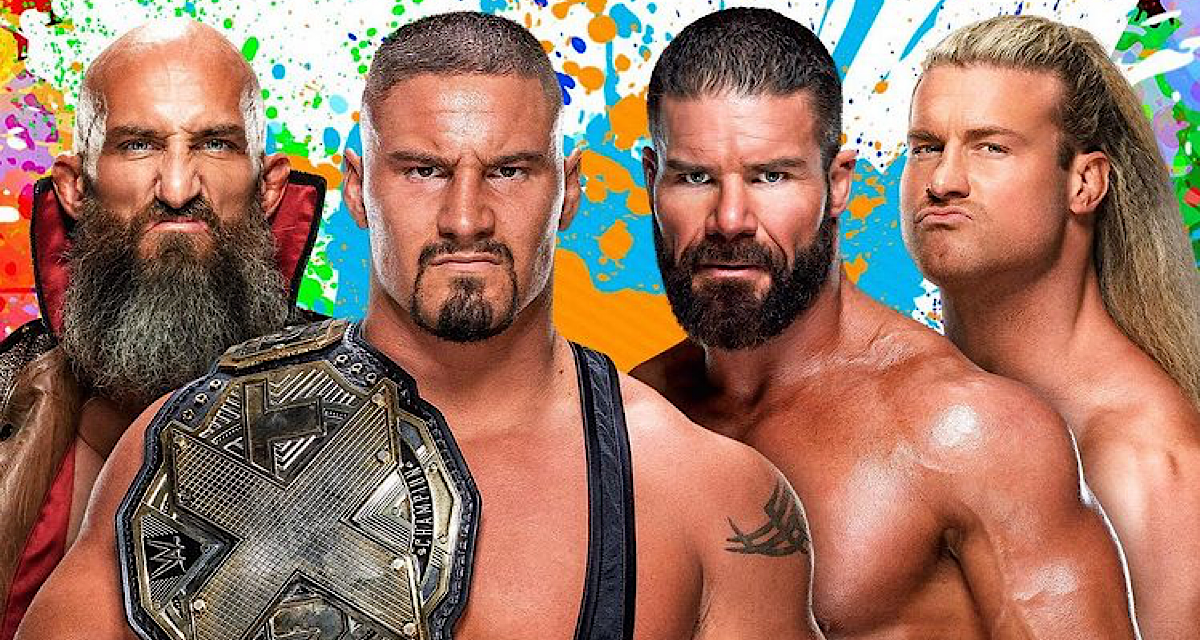 Months ahead of NXT 2.0’s inception of last year, the program’s consistent highlights have proven to be NXT Champion Bron Breakker and North American Champion Carmelo Hayes. Whether opening or closing the episode, the faces of NXT’s new era have been handed the ball, stealing shows with it every week.

“You don’t go here” chants are thrown at Monday Night Raw’s Roode and Ziggler, whose cross-brand rivalry with the opposition thickens. Breakker and Ciampa are wearing matching singlets and jump-start the matchup, eventually losing control to the Dirty Dawgs. Roode stifles Ciampa’s big comeback and tosses Breakker into the crowd following the break, leaving “Blackheart” to himself. But the NXT champion receives the hot tag, splitting Ziggler in half with a spear and assisting Ciampa’s top-rope bulldog for two. It’s Ciampa’s Fairy Tail Ending on Ziggler that gains the Steiner Friends the victory in tonight’s energy-filled, exciting opener.

Gunther shouts like a literal general in a promo package towards Solo Sikoa. Tonight, the Imperium leader vows to break Sikoa’s undefeated streak.

The incredible crowd reaction that LA Knight generates each week screams superstar, but before the inevitable jump, business with Grayson Waller is unfinished. Waller and his bodyguard Sanga appear on the ringside platform, and the stick battle begins. Their brash personalities consistently bring life to the program, but next week, only one will be “last man standing.”

In the preceding backstage segment, Pirotta is distracted by Duke Hudson instead of preparing for her opponents, which consists of a girl wearing a pajama onesie and another with schizophrenia. Meanwhile, Toxic Attraction is back in the Toxic Lounge to scout the 2022 Women’s Dusty Cup field, mainly including mismatches like tonight’s victors in Choo and Kai.

Accepting the fact that WWE prioritizes general entertainment over professional wrestling, its always impressive video packages correlate with the M.O. Next week’s tag team title matchup between Imperium and the Creed Brothers appears a tad more important with the production assist.

Mega powers implode after Legend and Miller were booted from the Dusty Cup. “These two just don’t mesh,” says commentary, referring to their short-lived tandem of course. Miller has athleticism, but it’s suppressed by Legend’s strength, leading to the pinfall victory with a slam. “I’m the new big superstar in the women’s division – not Nikkita Lyons,” says Legend.

Brooks Jensen and Josh Briggs are looking at a new truck, but Elektra Lopez mistakes their comments for her. “Good you found a car, because you wouldn’t know what to do with a real woman,” she says. “Jokes on you, I’ve never been with a real woman,” Jensen responds.

Big meaty men are slapping meat, although Gunther is looking leaner than ever. He dominates the majority of the matchup, but Sikoa finally gets going with a Samoan Drop and ringside splash. But Gunther avoids the next splash, cinches a sleeper, and delivers two powerbombs for the victory. Not a more deserving person to hand Sikoa his first ever loss.

Tommaso Ciampa and Bron Breakker interrupt Dolph Ziggler’s backstage interview, but the latter verbally turns the opposition against one another. It seems as if Ciampa and Breakker can’t coexist…

Anthony persistently tries to move the immovable object and eventually does with a shoulder block. But Harland returns by shoving Anthony’s face into the canvas, thereafter slamming him for three. Gacy gives his evil grin, and Harland reluctantly gives his opponent a big hug.

Carmelo Hayes and Trick Williams are interviewed backstage about tonight’s main event. “The question is who’s left for Melo?”

Struggling to fill brackets, and a division no less, Tatum Paxley asks Ivy Nile for admission into Diamond Mine despite last week’s loss.

Leon and Feroz have a vocal fanbase, or at least one nonstop screecher. The matchup is disadvantageously fast, causing some messy exchanges, but the anchor in Gonzalez holds it together — as per usual. She delivers the Chingona Bomb to advance forward into the Women’s Dusty Cup.

Speaking of which, Tony D’Angelo is by the docks. “On April 2nd, Tony D becomes a made man. As far as my opponent goes — they’ll be sleeping with the fishes.”

Robert Stone, of the Robert Stone Brand, doesn’t have a promising clientele list, but Wagner might be an outlier. Powers that be are backing Wagner, clearly more suitable in the villain role, and the stepping stones begin here — all puns intended. Ringside, Wagner clobbers Chase U student Bodhi Hayward which distracts the professor. And with that, Wagner delivers the finishing fireman’s slam for three.

After a viral debut last week, “the most well-rounded NXT superstar” Nikkita Lyons responds to Lash Legend’s call-out. Lashing Out with Lash Legend returns with special guest Lyons next week at NXT Roadblock.

“The A Champion” headlines once again, because “Melo doesn’t miss.” He continues racking up victories over NXT’s best, but new challenger Dunne proves stubborn with multiple clotheslines preceding break. With ringside distraction by Trick Williams, Hayes gains control with an apron DDT, but Dunne regroups with a mid-air elbow. Hayes’ maneuvers are incredibly flashy; he delivers a codebreaker and scissors kick but gets caught in the Bitter End. Dunne snaps the fingers of an interfering Williams, giving Hayes the opportunity to hit the top-rope leg drop for three.

On Saturday, April 2, Hayes announces that he’ll defend the North American Championship in “the same match that this title was founded: in a ladder match.”

Melo truly doesn’t miss. Another show-stealing performance from him undoubtedly, in my mind, makes Hayes the best North American Champion in its lineage. As for Breakker, he’s the champion that everybody envisioned from the start, and with continued lessons from veterans like Ciampa, Ziggler, and Roode, his future is extremely bright.