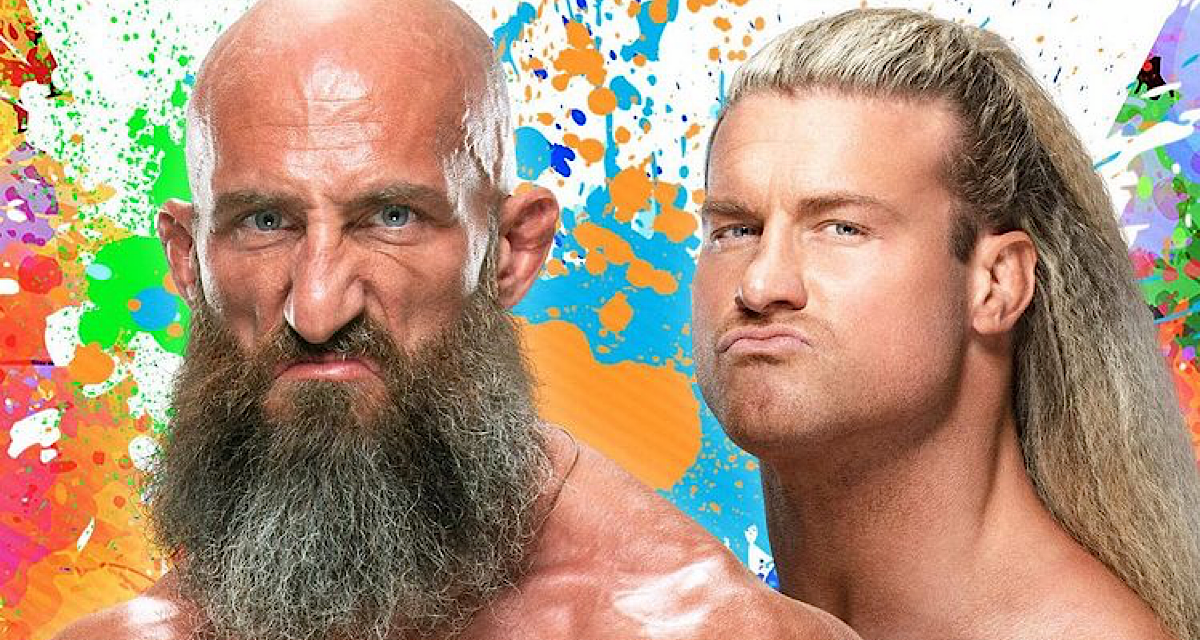 Knight controls throughout the first picture-in-picture in tonight’s clash of charisma, featuring two of NXT’s biggest crowd provokers. Waller reverses the momentum, but Knight eventually makes the comeback to a chorus of “yeah” chants. He attempts the BFT, but ringside, Sanga gives Waller support, leading to a roll-up victory with a handful of tights. But Knight is “the last man standing,” hitting both Sanga and Waller with the BFT. Getting the scoreboard victory though, Waller is really coming into his own.

Wendy Choo and Dakota Kai are the 2022 Women’s Dusty Cup oddball couple amidst a handful of other mismatched teams. Choo has her sleeping schtick and Kai has her imaginary friend, a wonderful representation of NXT 2.0.

From imaginary friends to imaginary cameras, Cora Jade convinces Raquel Gonzalez to go ziplining in the woods for team bonding.

Toxic Attraction has seats in the Toxic Lounge for Legend’s first NXT TV match, which is intriguing after her infamous 205 Live bout of course. But any damage is dampened with an extremely short runtime, as the veterans in Ray and Shirai hit their finishers for the quick victory.

More sitcom material from Brooks Jensen and Josh Briggs has the former recording a dating app introduction, which continues on in a second and third segment later tonight.

The returning Hudson continues his streak of well-developed feuds, a rarity for NXT 2.0. After injuring Chen’s leg, the Singaporean blindsides Hudson with some eye-for-an-eye limb targeting. However, the 6’5” Hudson powers through, hitting the Razor’s Edge for three.

NXT found a winning formula in Carmelo Hayes, Trick Williams, and two microphones. But in short time, “Bruiserweight” Pete Dunne interrupts and issues a challenge for next week. The North American Champion Hayes responds, “I’ll tell you like this, Skete Dunne. You want smoke with me? I got a leaf and a lighter for you, because the ‘A Champ’ ain’t never back down from a fight.” From out of nowhere though, Cameron Grimes attacks Hayes and Williams before abruptly cutting to break.

“Williams isn’t even dressed to compete. He’s got a pair of church shoes on,” says Wade Barrett on commentary. Nevertheless, Williams and his church shoes stomp a mudhole through Grimes until the latter makes a comeback. Grimes delivers a superkick, crossbody, and Cave In to defeat Williams, whose in-ring work falls short of the stick skills.

Today’s lesson from Andre Chase is about intestinal fortitude. “It means to have a set of balls, Michael, you dumbass,” says the professor. When students ask about his chances against Von Wagner, Chase loses his temper. Pitted against NXT’s other cheesy sitcom segments, Chase’s are definitely A+.

Weeks of vignettes hyping Lyon’s gimmick of singing, rapping, dancing, and fighting lead to the ultimate skill – wrestling. The grappling rises above her lowest bar of rapping, at least, but Mrs. Perfect is far from it. Granted, Lyons finishes with a bang, delivering a nice spinning kick and split-legged pin.

“Gross!” says Indi Hartwell as she catches Persia Pirotta making out with Duke Hudson. “Gross? You used to enjoy it,” responds Hudson. Looking on his Hartwell’s husband Dexter Lumis, who displays the standard emotion of sadness.

There’s something off-putting about Von Wagner, and it’s accentuated in a sharp suit. His manager Robert Stone, of Robert Stone Brand fame, sends a message to Andre Chase.

Joe Gacy responds to Draco Anthony shoving him at the gym. Next week, Harland and Anthony “will resolve their conflict in the ring.”

Toxic Attraction is back inside the Toxic Lounge, and Diamond Mine’s Roderick Strong is watching on ringside – hashtag free Roddy. It’s nonstop action with flips and twists, and Catanzaro wins with a 450 splash. In turn, Nile attacks her fallen partner Paxley, walking away as Strong reassuringly says, “that wasn’t you!”

Solo Sikoa is interrupted by Malcolm Bivens, who appreciates the help: “You got the juice now, uce!” Sikoa leaves him hanging.

Ziggler is revitalized with a needed change of scenery, yet Ciampa still has home-field advantage and crowd support. Ciampa, as per usual, shows fire and takes control preceding picture-in-picture. The competitors trade strikes, Ziggler hits the Fameasser, and Ciampa delivers a lungblower for two. Ringside, Ziggler hits the Zigzag and cinches a sleeper hold inside before his opponent powers out, delivering an Air Raid Crash atop the apron. Before Ciampa can capitalize, the masked cameraman attacks, letting Ziggler take the victory. The second Dirty Dawg, Robert Roode, unveils himself as NXT Champion Bron Breakker evens the odds for a perfectly executed pull-apart brawl.

The Dirty Dawgs are a great example of stagnating main rosters guys who can flourish with a run in Orlando. Ziggler is big fish, small pond, but in-ring, Ciampa outdid him as “Blackheart” is just on another level. More of this and less of the rest, please!