WWE Raw: Rollins and K.O. may have found a path, and Miz finds a ‘social media superstar’ partner 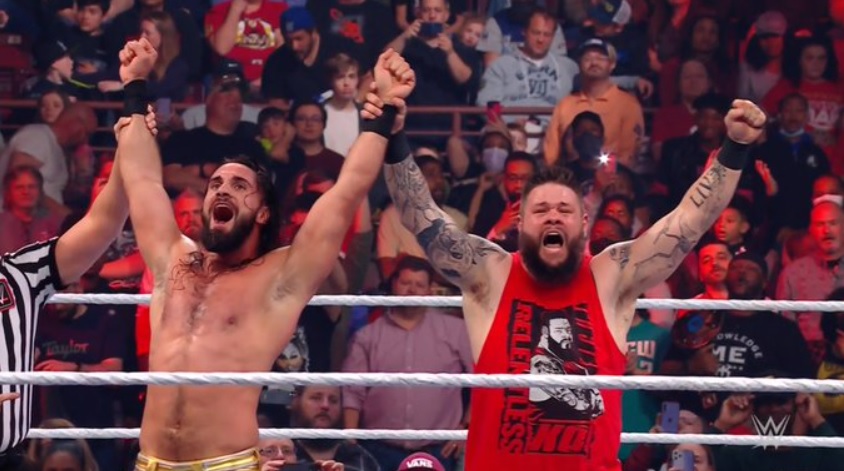 The Olympic hiatus to SyFy is over, and Raw is back where it belongs on USA. With the WrestleMania picture becoming clearer with each week, the scene tonight shifts to Columbia, on the campus of the University of South Carolina. Among other things, Miz is teasing a special guest for Miz TV, and there are some excellent guesses as to who he might be summoning. Let’s get going on finding out, shall we?

After an extended review of what went down at Elimination Chamber, the much more fan friendly version of Brock Lesnar makes his way to the ring. Oh yeah, he’s also the WWE Champion, a significant tidbit since his showdown with Roman Reigns at WrestleMania is now champion vs. champion, winner takes all. His attempt to address the adoring fans is quickly cut short by the arrival of someone Lesnar knows all too well, Paul Heyman, talking tough as he calls himself the Special Counsel for the “only real heavyweight champion” in WWE. Heyman seems pretty pleased by the fact that Lesnar has to defend his title in March at Madison Square Garden, meaning he might not even be WWE Champion come Mania. He adds that the match is supposed to be against Bobby Lashley, who may or may not be out of concussion protocol by then. If he isn’t, Heyman promises to make it a match worthy of MSG. Sarcastically thanking Heyman for telling him where he’s supposed to be, Lesnar drops a nugget of his own: He’ll be at Hershey, Pennsylvania this Friday to introduce himself to Reigns at Smackdown. Hey, that’s where I live, convenient. They aren’t meeting in my den, as far as I know.

Seth “Freakin'” Rollins and Kevin Owens might not seem to have a path to WrestleMania, but they assure Kevin Patrick that they do. If they beat RK-Bro tonight, they’ll be added to the Raw Tag Team Championship match in two weeks, and if they win the belts, their Mania options are basically unlimited. K.O. is still making fun of Texas, so the Stone Cold Alert Level is remains at Blackwatch Plaid.

This is the kind of match that really puts WWE’s booking logic to the test. As champs, Alpha Academy really should win to remain strong, and the Profits are over win or lose so they don’t need a victory here. Will logic prevail? We’ll see. A big spot is teased with Montez Ford scooping up Otis for a slam, but he can’t quite pull it off, and Chad Gable lends an unseen hand from the floor to help his partner get the three count. Score one for logic.

Tommaso Ciampa feels no additional pressure facing Dolph Ziggler on Raw, and since it’s a tag team match, he needs a partner. It’s someone who won’t forget where he came from: Finn Balor. Sweet.

Interestingly, this is at least partially a way to promote a singles match between Ciampa and Ziggler on NXT this week. Much of the narrative from the announcers is how Ziggler and Roode are a longtime tag team whereas the other two are not, so that’s a good way to explain a loss for the faces if one is coming. But nope, not only do the good guys win, Ciampa actually gets the pinfall too.

As we prepare for Miz TV, there are two rumors for who his guest might be tonight. The fun one is a re-debuting Cody Rhodes, but the even more “of the moment” one is Logan Paul. We’ll have to wait until Miz runs down Rey Mysterio a bit before we find out if it’s one of those gentlemen or someone else. Miz promises his new tag team partner is from a fighting family and is “dashing,” so he’s at least teasing Rhodes. The Mysterios come out before he can get to the reveal, with Rey claiming no one in the back will team with Miz. He might be right, but it doesn’t matter as Miz introduces “social media superstar” Logan Paul. Dominik Mysterio gladly accepts the tag team match for Mania, but Miz and Paul quickly jump and overpower them. Both Rey and Dominik receive Skull Crushing Finales (the latter from Paul), and this should be a mid-card meeting with some buzz behind it at WrestleMania.

Gable dismisses the thought of Rollins and Owens complaining to get a title shot, but promises that the Academy will win in two weeks no matter who is in the title match with them.

I enjoy long form storytelling in wrestling as much as anyone, but it feels like this is the 79th match between these two over the past few months. Hoping for some kind of twist to make this one stand out. Spoiler: There is not. Ripley wins.

If you didn’t see the Hall of Fame announcement video for The Undertaker, definitely check it out. It’s shown again here and I don’t mind one bit.

The framing here is that Benjamin can get back on track to … relevancy, one supposes, with a victory over Priest in front of his home fans. Somehow I think not, unless there are hijinks looming over this bout. Even with help from Alexander and some impressive offense, it’s not to be, as Priest gets himself back to winning.

Priest gives Benjamin credit for fighting him like a man while stating that he’s also defeated a number of serious athletes and remained United States Champion. Since it’s Mania season, he is willing to put his belt on the line next week, but he wants the challenger to be world championship caliber. He doesn’t have to wait a week to find out, as Balor returns to the stage and accepts the challenge for next week.

New-ish 24/7 Champion Reggie has something he wants to get off his chest, and brings out the woman who put him in the friend zone last week, Dana Brooke. Reggie apologizes for taking the opportunity he saw last week, and he calls out a referee. He lays down and acts like he’s going to let Brooke pin him, but kicks out twice at two. He acts like he’s going to do it a third time, but Dana gives him a deep kiss that keeps him down for three. So he lost his title but maybe won Dana’s heart? The usual group of 24/7 title chasers comes out, Reggie helps Dana escape, and Akira Tozawa shoots his shot for romance with Tamina but fares poorly.

I like Bianca Belair a lot, but I’m not sure she’s going to win the battle of dueling promos with Becky Lynch headed to WrestleMania. A big talking point in this first verbal showdown is Lynch beating Belair in 26 seconds at SummerSlam last year, which Bianca says she turned into fuel: She went to the back of the line and worked her way back into the title picture by winning continuously. Belair says she isn’t a victim … but Becky claims that label for herself. Big Time Becks says all the people loved her until Bianca came along, at which point they turned on her. Things sound like they might be coming to blows, but Belair already has a match scheduled tonight …

This match is worth the price of admission just to hear Lynch join the announce team and debate her heel turn with Byron Saxton. I could listen to half an hour of that. Belair gets Doudrop up for a suplex, Lynch gets some water since she’s feeling dehydrated, and Bianca ends up prevailing.

Since his memories of the Show of Shows go all the way back to listening for radio results from WrestleMania III, Edge reflects on how cool it’s been for him to be part of so many WrestleMania moments in his own right. He still dreams about it every year, what it feels like to feel the energy the crowd gives him to be phenomenal. Wait, could that word be a hint to his plans? Edge says he makes everyone around him better during Mania, and says this year’s event can’t truly be stupendous without him. Ah, well then someone better get on that, because there’s been a lot invested in that adjective already.

As a reminder, the deal here is that if Rollins and Owens win, they are added to the tag team title match in two weeks. On one hand, that makes some sense, but on the other, there are those K.O.-Stone Cold rumblings. If that’s really happening, it’d seem like a shoe-in that Seth and Kevin lose so they can remain frustrated about their WrestleMania chances. Don’t know where that would leave Rollins, but hey. The announcers point out that RK-Bro’s path to Mania is also unclear if they can’t win the tag team belts, which is a good point. After a number of near falls each way, Rollins is able to pin Riddle, so he and K.O. are now in contention for the titles on Raw in two weeks. That should be fun, and perhaps make Rollins and Owens even more desperate if they lose, so I dig it.

And that’s a wrap for this week. See you in seven!

While nothing was particularly incredible tonight, nothing stood out as boring or inane either, just a solid, workmanlike edition of Raw. There’s quite a bit to like about the build-ups for various feuds leading into Mania, so hopefully WWE can keep that feeling going over the next seven weeks. Also, we’re definitely making up some kind of drinking game involving the word “stupendous” soon.