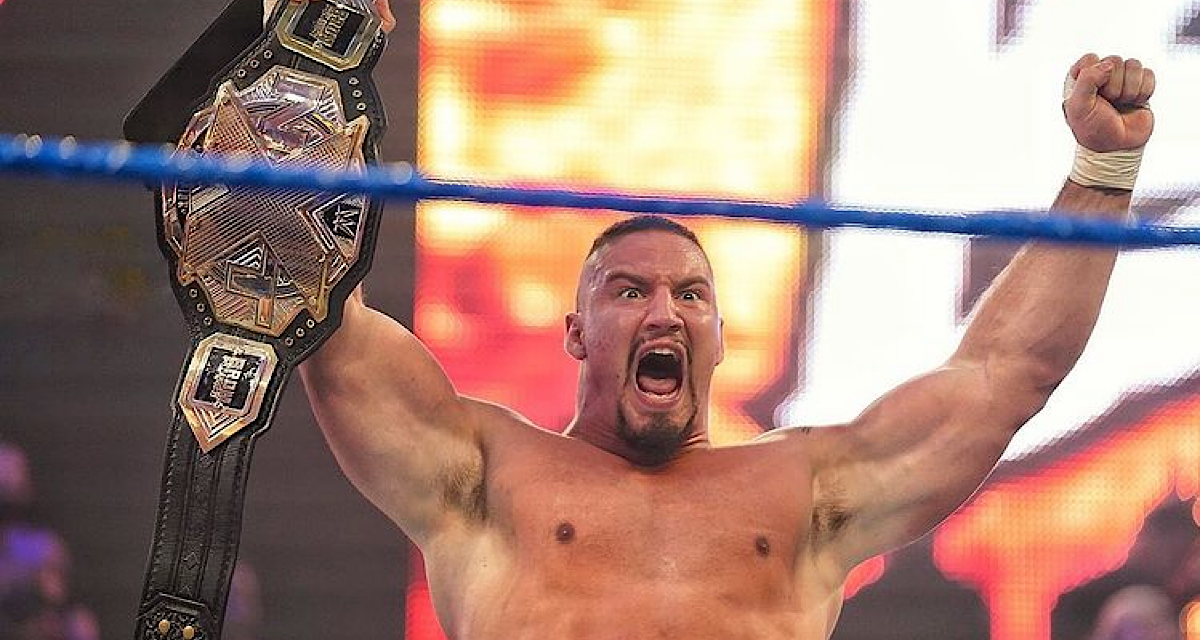 Speaking of Rhodes, tonight’s NXT Vengeance Day is headlined by the finals of the Dusty Rhodes Tag Team Classic Tournament along with a remaining card of high stakes. The NXT Women’s Tag Team and North American Championships are on the line with tonight’s opening contest being held inside a weaponized steel cage!

The explanatory stipulation calls for chairs, garbage cans, tables, and other items scattered around the ring. If it wasn’t crowded enough, a cameraman is up close and personal like a documentarian invading an animal’s natural habitat. After delivering a superplex, D’Angelo ties Dunne’s hands together and has his way like Gerald’s Game until desperately cutting them to break a submission. Dunne powerbombs D’Angelo through a table, breaks over a cricket bat, and hits the Bitter End for a surprising two count. But with a crowbar and second Bitter End, Dunne secures the victory in a quick and exciting opener.

Cameras are in Cora Jade’s house when she wakes up for training with Raquel Gonzalez. NXT’s most overlooked flaw is the invisible cameramen – who are watching people sleep. WWE really does capture footage of everything.

“We’re the ones that hit the bags,” says Brutus Creed of Diamond Mine. “MSK, the only thing you’re hitting is still illegal in 13 states,” adds Malcolm Bivens in a backstage promo.

Here are two of possibly four legitimate tag teams in NXT’s unbelievably shallow women’s tag team division, which will struggle to fill a complete bracket in next week’s Women’s Dusty Cup. The referee ejects Mandy Rose from ringside preceding picture-in-picture, but Toxic Attraction controls throughout. Pirotta makes the comeback but is thrown into the steel steps, leaving Hartwell alone in-ring. The double-team finisher from Jacy Jayne and Gigi Dolin puts it away as Toxic Attraction retains.

Josh Briggs and Brooks Jensen are at the bar discussing their Valentine’s Day. Jensen’s date said that “to her, (he’s) like a little brother.” Briggs responds, “I know you’re from Alabama, but that ain’t a good thing!”

LA Knight gets an overwhelmingly huge reaction before Grayson Waller interrupts with two police officers. Knight broke the restraining order last week, but “according to page two,” so did Waller by attacking him. So, the officers leave, and Waller gets his comeuppance until Sanga makes the save.

“I am NXT’s breakout superstar,” says Hayes in a preceding video package, and he’s right. With a super confident presence, Hayes and his cornerman Trick Williams are indeed “bout it bout it.” The competitors are even in the opening goings though, and Hayes finally gains the upper hand with a springboard leg drop. He retains control through picture-in-picture, and Grimes makes the short-lived comeback as the champion connects with another springboard. They trade blows, and miscommunication from Williams gives Grimes a hype near-fall. Some close calls later, Hayes delivers a beautiful top-rope leg drop for three as the “A Champion” does it again: “Melo doesn’t miss.”

Partners Kay Lee Ray and Io Shirai are bonding over smashing glass. Shirai’s other mismatched partner, Zoey Stark, steps in, but her cup of water is broken too.

The 2022 Dusty Rhodes Tag Team Classic comes to a close, and in spirit, MSK enters to an older, pre-recorded speech from “Dream” himself. Diamond Mine’s Malcolm Bivens gives his own speech and presents a towel to MSK that reads “never give up… nah, you should.” MSK immediately shows off their speed and agility, but before picture-in-picture, Wes Lee is thrown into the announce desk. The Creed Brothers, who were fantastic faces last week, are now burly bruisers who survive Nash Carter’s big comeback. Carter attempts a suicide dive but is caught by Julius, who spikes himself ringside. With one final blow from Julius, the Creed Brothers capture the win and the Dusty Cup. The victors celebrate with their trophy and an absolutely elated Bivens.

Nikkita Lyons shows off her dancing, singing, rapping, and MMA skills, yet the vignette is somehow still hollow.

After supposedly letting the backlash blow over, Gunther is back, backed by Imperium. “WALTER” chants ring aloud as Imperium, the NXT Tag Team Champions, send a message to The Creed Brothers. “With the highest of interests,” Gunther will be watching tonight’s main event. But first, Solo Sikoa comes to interrupt with a bold challenge; mic skills evidently run through the bloodline (pun intended).

In a backstage interview, Dolph Ziggler reacts to Tommaso Ciampa’s appearance on RAW. Ziggler is breaking into Ciampa’s “house,” and they’ll compete one-on-one next week.

The infamously fickle fanbase is on Escobar’s side and so is Legado del Fantasma standing ringside. The faction’s distraction gives Escobar the advantage, and he retains control throughout a large portion of the match. Featuring the night’s first drawn-out resthold, Escobar’s deliberately methodical offense brings down the show’s momentum. But Breakker’s comeback takes them back, taking out Raul Mendoza and Joaquin Wilde in the process. With the referee distracted by Elektra Lopez, Dolph Ziggler slides in to superkick the champion, but Tommaso Ciampa makes the save. Breakker delivers an insanely brutal spear and finishing powerslam to retain his championship. Reaffirming WWE’s mindset, commentary says, “If you don’t have a sense of respect now for the NXT Champion, there’s something wrong with you.”

With relatively quick matches, tonight’s entire lineup was exciting and effective. The “WWE style” bogged down the main event’s first half, but when the chains are off for people like Carmelo Hayes and MSK, the in-ring action is amazing stuff.