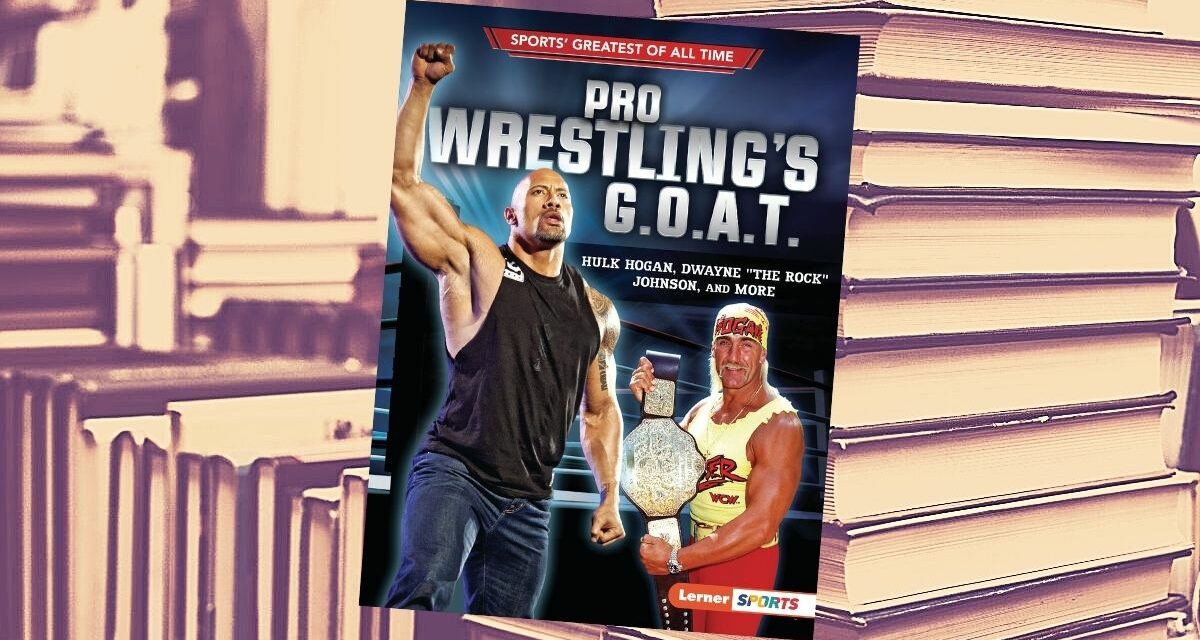 Lerner Sports has a series of books aimed at children under the “Sports’ Greatest of All Time” title.

In the summer of 2021, Pro Wrestling’s G.O.A.T. came along, written by Joe Levitt, following other short books on the best in boxing, gymnastics, football, golf, tennis, track and field, hockey, basketball, soccer, auto racing, and baseball.

Naturally, there will be controversy with any greatest performer list. However, in “real” sports it can be a lot more statistic-based, performances on the field and championships won.

But in something like pro wrestling (and gymnastics?) where it’s so much more subjective, it is even easier to argue.

Instead, they are simplistic, quickie takes on some of the greats from pro wrestling … but I am reluctant to say history, since the furthest it goes back is the 1960s with Bruno Sammartino.

After a brief explanation of pro wrestling, we get to the meat of the matter, and the Top 10, each with a brief description, some statistics and great photos. It’s appealing to the eye, especially for the younger set. There’s also a glossary, a collection of wrestling facts and a note that everyone will have a different list of the best of all time, which is a good message to share with the kiddies.

Should I spoil it? Why not. This website is not aimed at kids, like this book is.

See what I mean about not going too far into the past?

I’ve got to give props for including Manami Toyota, though. That is a bold choice and a very good one, in my mind. Of all the names, though, that’s the hardest for a young fan to catch up on. The Manami Toyota videos on YouTube aren’t always the best quality, unlike the DVDs that exist for every other wrestler, or feature presentations on the WWE Network, and whatnot.

Levitt gives a lot of weight to Dave Meltzer‘s ratings in The Wrestling Observer Newsletter, noting that Toyota had 13 five-star matches, for example. (Meaning The Young Bucks and Kenny Omega are destined for the top of the sequel?) To me, this is trying to put analytics into a “sport” that isn’t real, and is misleading to kids, and adults, for that matter.

I see Pro Wrestling’s G.O.A.T. as a decent introduction to pro wrestling for young kids (under 7), and if you are a good parent, aunt, uncle, or friend, you then sit them down to discuss your own favorites, and watch some vintage wrestling together.