Who is the best professional wrestler of all-time? That is a question that has been asked for ages and the answers you get will vary from person to person. In Larry Matysik’s The 50 Greatest Professional Wrestlers of All Time: The Definitive Shoot, Matysik aims to list his top 50 stars of the ring. Based on his own criteria, Matysik presents arguments for each ranking, whether it be popular or controversial. 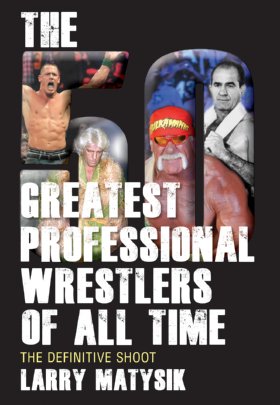 It is important to note that, while any list can be defined as “definitive,” Matysik has more than enough credentials to lend credibility to his rankings. Having been a figure and promoter in the St. Louis, Mo. wrestling scene for decades, Matysik has also published a number of informative books on professional wrestling, including Brody: The Triumph and Tragedy of Wrestling’s Rebel and Wrestling at the Chase: The Inside Story of Sam Muchnick and the Legends of Professional Wrestling. Matysik’s decades of experience provide a unique perspective that should bring high regard to his rankings.

The book does not start with the list, but a deep explanation to cover all bases. Matysik defines his criteria for selection as “real,” citing common sense as his major indicator for inclusion in his prestigious list. While the criteria may seem rather vague, Matysik seems to make it work in his list. The ranking that a certain wrestler gets may surprise you, but reading Matysik’s logic and arguments, it gives you a clear example why his argument is one worth listening to.

What is also of note is the first 100 pages of the book, going through explanations as why some wrestlers are not included, interesting asides, etc., Matysik does a solid job of enticing readers to carry on until they reach the list. Had this just been a simple book with a list of 50 wrestlers an author thought were great, it is understandable why it would not be every wrestling fan’s cup of tea. However, Matysik uses the first 100 pages of the book to outline his choices and give interesting insight into his selections.

Of course, the main reason the book was published was the list itself. The first thing that strikes you is the array of wrestlers that are included. While we are often subject to a certain organization’s revisionist history and bias on all time lists, Matysik includes wrestlers from any era you can think of. From the early days of legitimate contest to today’s over-the-top theatrical approach, you’ll find the best of the best from each period. Some names might not even be recognizable to some dedicated fans, which makes for an interesting surprise and read.Finally, the rankings themselves put the cherry on top of this literary sundae. All the familiar names of the past and the present are there, but some names might fall higher or lower than you expected. While names like Bret Hart, The Undertaker, Steve Austin, Frank Gotch, and Lou Thesz appear, each man’s respective ranking will surely generate heated debate on their contributions to the sport. Regardless of ranking, Matysik does a fine job of describing the stories of each man and why they are ranked where they are.

Larry Matysik’s The 50 Greatest Professional Wrestlers of All Time: The Definitive Shoot might not have the most original concept that will draw your eyes to the bookshelf. However, if you dive deep enough, you’ll find that the proverbial book shouldn’t be judged by its cover. Inside, Matysik provides an intriguing list that will surely either have you scratching your head or nodding it in agreement. While it may not be an essential text for the wrestling aficionado, ECW Press has published a book that is worth a look and will surely spark debate among readers.