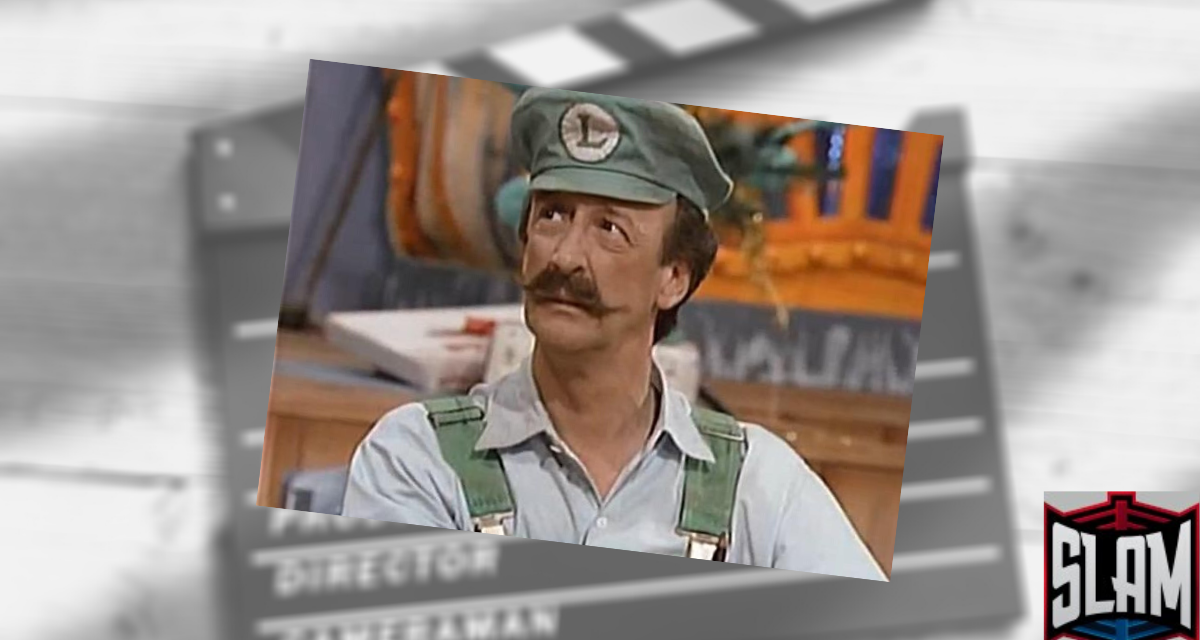 Mario and Luigi, the Super Mario Bros., are certainly among the most famous sibling duos ever from the video game world. But when they were brought to life for the first time, on TV’s Super Mario Bros. Super Show! in 1989, the producers chose ex-wrestler Capt. Lou Albano to be Mario, and Canadian actor Danny Wells as Luigi. Today, Wells shares his memories of the show and of his co-star.

Wells was familiar with the Super Mario video game, where a plumber and his friends try to save the princess. But starting in 1985, it came bundled with the Nintendo Entertainment System, and the game was known worldwide — and still is today.

“It was the most popular video game in the world,” said Wells. “Anywhere people bought video games, everybody knew Super Mario Bros.” 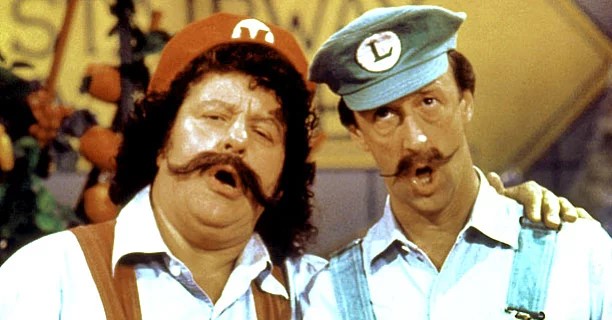 Albano and Wells show off their vocal pipes

But the idea of a television show, combining live-action with cartoons, while not exactly revolutionary, was foreign to the people at Nintendo.

In a 1989 interview with the Chicago Tribune, Andy Heyward, the executive producer for DIC Enterprises and one of the show’s writers, talked about the difficulties in getting the deal to take root.

With franchises like Ghost Busters, ALF, Dennis the Menace, Heathcliff, and Inspector Gadget already under the DIC banner, Heyward found a challenge in Nintendo company, based in Japan.

“When we went to Nintendo and said we wanted to do a TV show on the Mario brothers, we thought they were going to jump up and down and offer us a terrific deal,” Heyward told the Tribune. “Their first answer was, ‘No, we don’t want to do it; We can’t meet our demand right now; We don’t need you and we don’t need any television show.’ We begged and pleaded and we brought together a creative team [that] they were very impressed with and we said we felt we could produce good entertainment that would be viewed independently of the game. They finally agreed, but we have to pay them a royalty, and very healthy one, which is unheard of in the kid business. It’s always the other way around.” 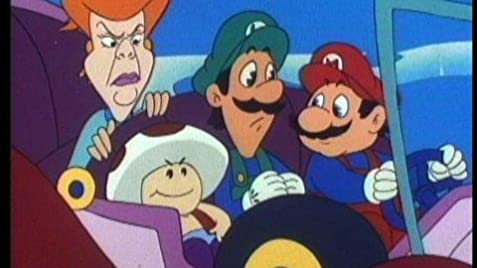 Albano had entered the mainstream culture while appearing in Cyndi Lauper music videos, and had landed a few small roles in movies. Though he didn’t have a moustache, he looked like Mario, so he got the gig.

Albano did an interview with the Kidsday newspaper insert when the show was coming out and explained how he got the part. “I met with Nintendo people and I had done a cartoon before. I’ve already had some acting experience because I have been in movies like Wise Guys and Body Slam and TV shows like Miami Vice.”

The Montreal-born Danny Wells had left home in the 1960s to try his hand at stand-up comedy in New York City. He met everyone along the way — “you name it, Sinatra on down” — and was urged to move to California by his talent agency. There, he found steady work, which continues to this day. His most famous role is playing Charlie the bartender on The Jeffersons, which lasted for 11 seasons, but Wells has been in countless films and shows, from Love, American Style to K-Mart commercials to Magnolia. 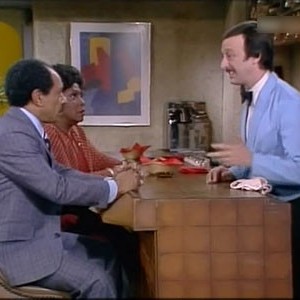 Wells in his recurring role on The Jeffersons

Wells said he got a call to see if he would be interested. “They try to woo you into it and you negotiate a deal, and you either agree to do it or you don’t,” he explained. There were no prerequisites, like being Italian or having a moustache, he added.

With Mario and Luigi cast, the work began.

“I did not know Lou. Lou lived on the East Coast, I lived on the West Coast. But Lou looked like Mario, Lou looked like the icon,” said Wells. “I was tall and skinny. Neither of us had mustaches, but the characters did. That was part of making them look like the character. The difference in size between Lou and I worked. With the icons, Mario was bigger than Luigi. On the show, I’m taller than Lou.”

The outgoing, boisterous Albano, was a hit on set, said Wells.

“He was a gentle soul. He was not an actor. He had never done anything like this before, but he was willing to learn,” Wells said. “He had never done voiceovers before, because not only did we do the live show, but we did all the voices for the cartoons that were on the show. It was very intense. The schedule was brutal, just brutal. We did six days a week and we shot in the studio until we were ready to fall down, and then we had to go to another studio to do the voiceovers for the cartoons.”

The process of creating the brothers from scratch was unique.

“Remember that the Super Mario Bros. didn’t exist. The Super Mario Bros. was a video game, they didn’t talk, they didn’t have a second name, they didn’t have a job. They were just little icons in a video game,” Wells reminded. “It was up to the people involved, me being one of them, to create these characters, to give them a life, to give them a job, where they lived, and their relationship with each other. We took a nothing — just little icons from a video game — and turned them into living, breathing characters.” 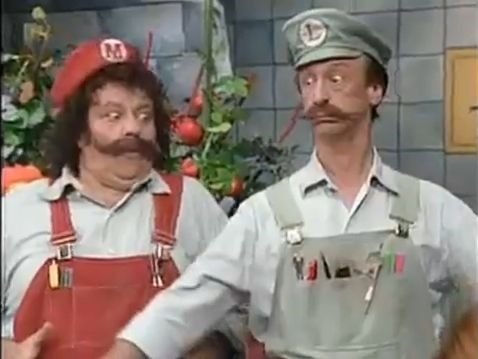 In a general episode, live-action Mario and Luigi would goof around to start the show, leading into the cartoon. Five shows aired a week, and on Fridays, the shows centered around the Legend of Zelda video game rather than Super Mario Bros.

“We’re the only two regular live characters on the show,” Albano explained in Kidsday. “As plumbers, we get washed into the fantasy land and here we meet Princess Toadstool and the Mushroom people. There are bad guys in here too, like King Koopa and the Koopa Troopas.”

In the Tribune article, Heyward said that the show was purposefully very broad in its appeal. “One of the problems with kids’ shows is they are very age specific and gender specific,” he said. “They’re working for boys 6-8 or for girls 4-7 or whatever, but Mario Brothers is a unique phenomenon because it works for boys, it works for girls and it has a very broad demographic. To have something that’s appealing to younger kids and, at the same time, is not a turnoff for older kids is very very good.”

“We went on the air, three o’clock in the afternoon, with no publicity or P.R. at all. There was no pre-build-up to this show, nothing,” he recalled. “They just threw us out there. In three weeks, we became number one. We beat Disney, we beat everybody, without any publicity, without any help from anybody, this show went to the number one daytime cartoon show. They put us up against Mickey Mouse, it didn’t matter, we beat them. It was amazing. We got bags of fan mail every day, literally. We were shown all across the country. It was a syndicated show, but we literally went on the air coast to coast and we became the number one afternoon cartoon show, five days a week.” 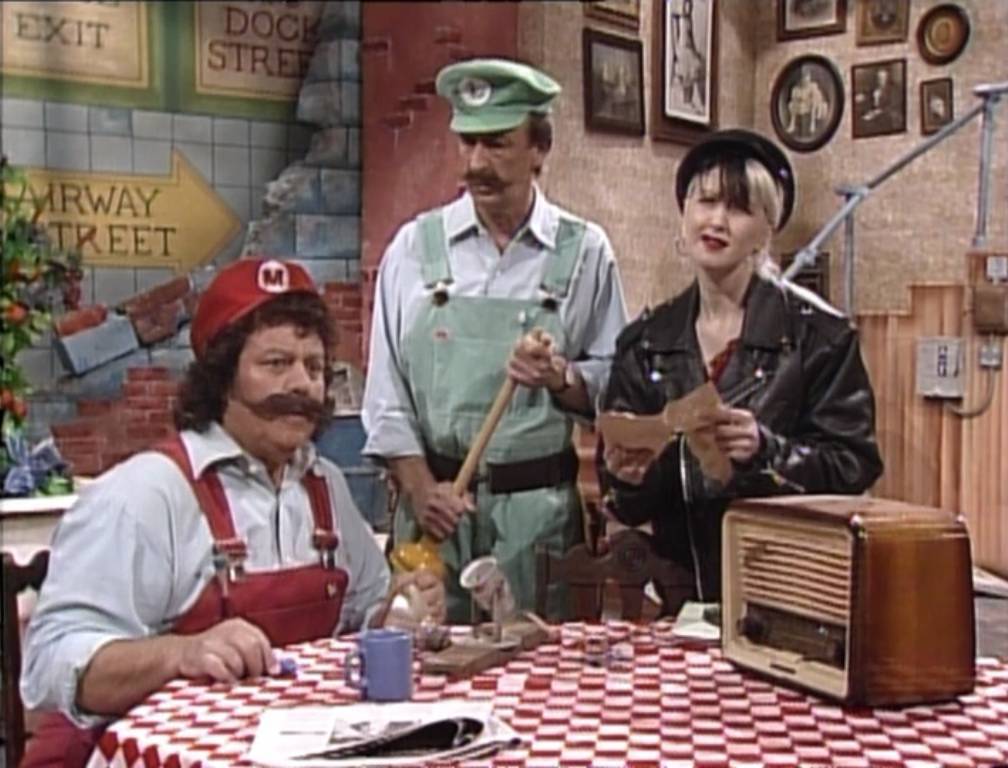 Albano and Lauper are re-united on the show

“Every day Luigi and I will go to a different home of a celebrity, and try to fix their plumbing,” said Albano. “We will visit people like Pat Morita, Magic Johnson, Cyndi Lauper, Vanna White and Little Richard.”

While looking back now, the list of superstar appearances were largely ’80s-only phenomena, such as Elvira and Moon Unit Zappa, they were all clamouring to be on the show, according to Wells.

Just as good wrestling gimmicks are sometimes killed on the whim of cantankerous promoters, Wells describes how Nintendo cancelled the show at the top of its game, after just 52 episodes (one season).

“The show didn’t last because the show didn’t mean anything to Nintendo,” said Wells. “After the first run, Nintendo said, ‘Pull the plug.’ They didn’t care if we were number one. It didn’t mean anything, because we were chump change to them. They were a multi-billion dollar company and we were just chump change. They weren’t in it for the money. DIC sold them a bill of goods, put us on the air, we became number one, and then Nintendo pulled the plug. That was it.”

The show is still popular today. “I know adults who have the complete collection of the Super Mario Bros. and their kids are now watching it,” said Wells. As well, episodes have aired on Yahooligans! TV, Jaroo.com, and more recently, Netflix and Hulu. MarioWiki details all the shows.

“If this was a Disney show, we’d still be on the air because it was a money-making machine,” said Wells. “The show was canceled, not because the numbers weren’t good — we were number one — just Nintendo said, ‘Okay, we’re done. Thank you.’ That was the end of it. Lou and I looked at each other, we couldn’t believe it, we just couldn’t believe it.”

It was Albano’s last prominent role in Hollywood, and when the 1993 live-action Super Mario Bros. movie was cast, Bob Hoskins was Mario and John Leguizamo was Luigi. With his pro wrestling days as a wrestler and a manager behind him, Albano was active in charity work, including acting as national chairman for Multiple Sclerosis. The Captain died in 2009. 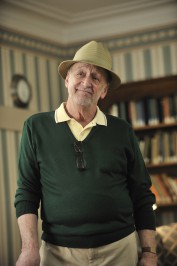 As for Wells, there is no doubt you have seen or heard him since. He’s put together an impressive resume besides Mario and The Jeffersons. Stephen J. Cannell, for one, loved him. “I did everything Stephen did. He wouldn’t do anything without me. I was his good-luck charm, from The A-Team, to Hunter, you name it, any show he ever did.”

These days, at age 71, Wells prefers the voiceover work.

“Some people don’t know how to do it. It’s an art-form. You have to create a character with just your voice, you don’t have any gimmicks. It’s an art-form. Lots of actors can’t do it,” he said of voiceover work. “Those who are in it are very, very good. I do lots of voices. I have three series on the air right now, full series, that are on the air.”

Albano hams it up in ‘The Super Mario Bros. Super Show!’