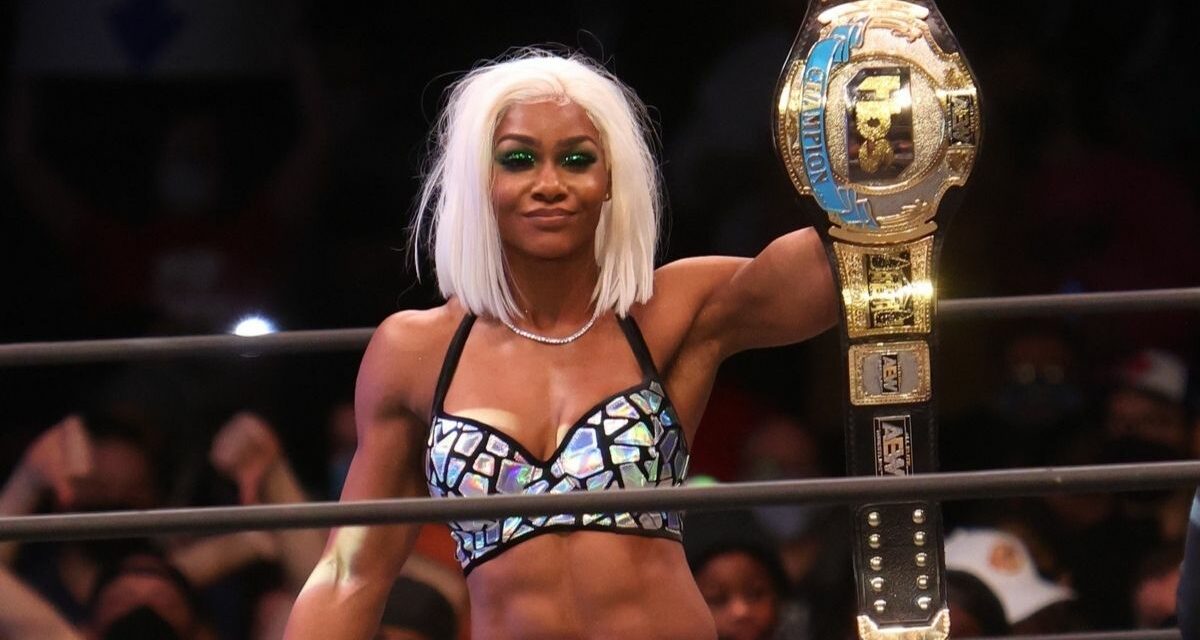 This week’s edition is live but…that doesn’t make much difference to you because you are reading this after the show has already aired. I guess that doesn’t make this recap that special and neither was tonight’s edition of Rampage which was filled to the brim with match-ups nobody wanted and a main event that was overrun by an unstoppable, relentless, never-ending commercial break.

In the main event it was Jade Cargill defending the AEW TBS Championship against challenger Anna Jay, who is improving in leaps and bounds but needs a bit more experience before she can headline a show as we see with this bout.

Anna Jay touts herself as “The Bitch Slayer” (TBS) in the pre-match jibber-jabber hosted by Mark Henry. I don’t know about you guys but I love those segments and the looks on Henry’s face sometimes. They make me smile. 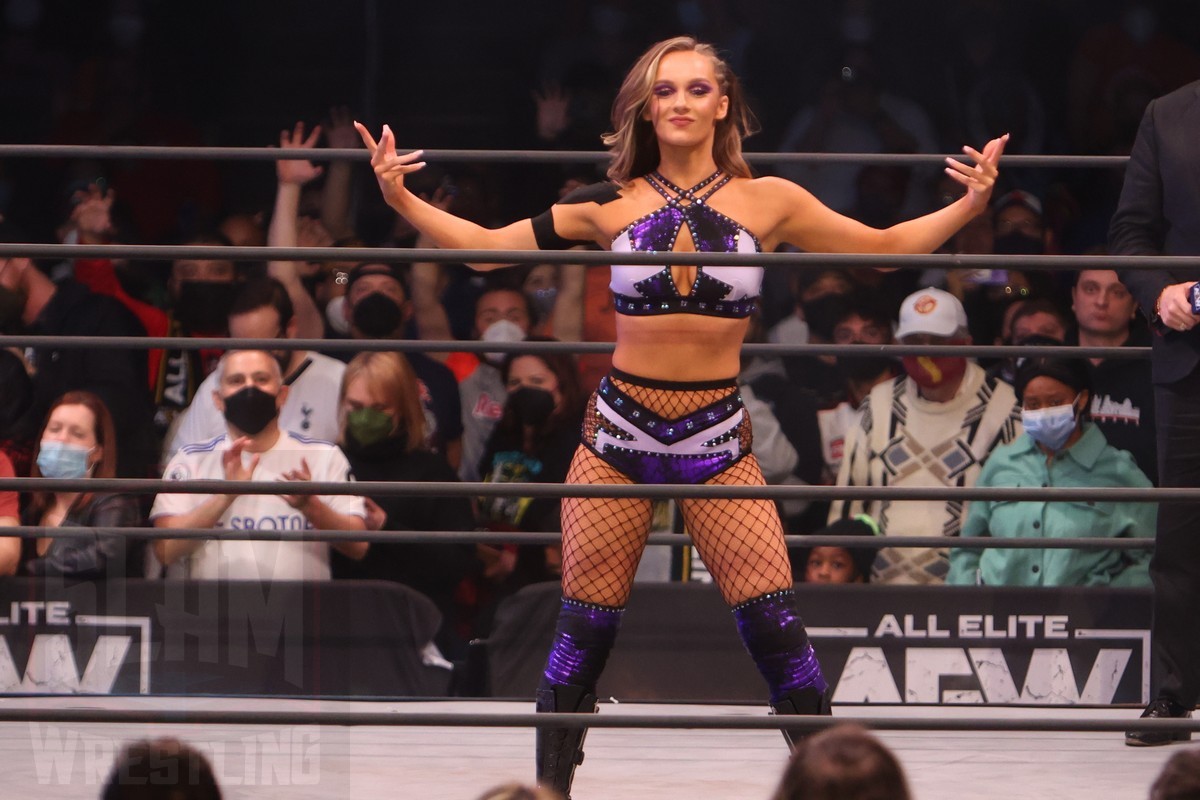 True story, at WrestleMania XXIV in Florida Mark Henry and his family were eating breakfast in the same restaurant as I was and let me tell you, that man can wrangle kids just as good as he does talent in the ring.

Jade isn’t wearing her old school Storm attire again but here’s hoping she comes out as “Mohawk Storm” one day.

John Silver is outside the ring for Jay and of course Smart Mark Sterling is lurking around for Jade.

There is a lot of trash talking during Jay and Jade’s stare down to start things off. Jade’s headlock leads to a shoulder tackle which rattles Jay’s molars. Jade catches Jay off the ropes and slams her.

“I am that bitch!” yells Jade to the crowd. Jay catches Jade sleeping rolling her up for a two count.

As Sterling makes a move towards Jay on the floor Silver cuts him off. Sterling hides behind Jade. Silver and Jade exchange pleasantries. Silver ducks as Jay hits a running clothesline and bounces Jade’s head off the ring apron.

At this point, the rest of the match is overrun with a literal tsunami of ads for every pop, chocolate spread, subway sandwich, instant rice, mobile phone, home security, disinfectant brand in existence while also looping in a thousand spots for that weak ass Snow Piercer series. Take my advice. Watch the 2013 movie by Bong Joon-ho and you can save yourself from watching yet another American interpretation of a story that was perfect the way it was told in the first place.

I must admit I missed much of the match playing out in picture-in-picture because my exhausted Friday brain became hypnotized by a Wipeout commercial. Sorry, I cut the cable cord years ago and watch my favourite shows without commercials or ads so I was easily entranced by this one. Ouch! Oooh! Ouch!

When we FINALLY come back from the ad onslaught Anna has Jade in a Queen Slayer over the ropes. Jade ends that with a Jawbreaker.

Jay roughs up Jade with a flurry of kicks and a Flatliner.

Sterling leaps up on the apron. Silver pulls him down slamming him on the floor.

Jay rolls out of Jaded to lock in the Queen Slayer. Jade muscles herself back to her feet slamming Jay into a corner. Jay sits on top of the turnbuckle putting Jade in another sleeper hold. Jade breaks out, slams Jay with a one-armed powerbomb and hits Jaded for the win.

The show ends with gratuitous shots of Jade posing with the belt and Jade’s daughter at ringside. 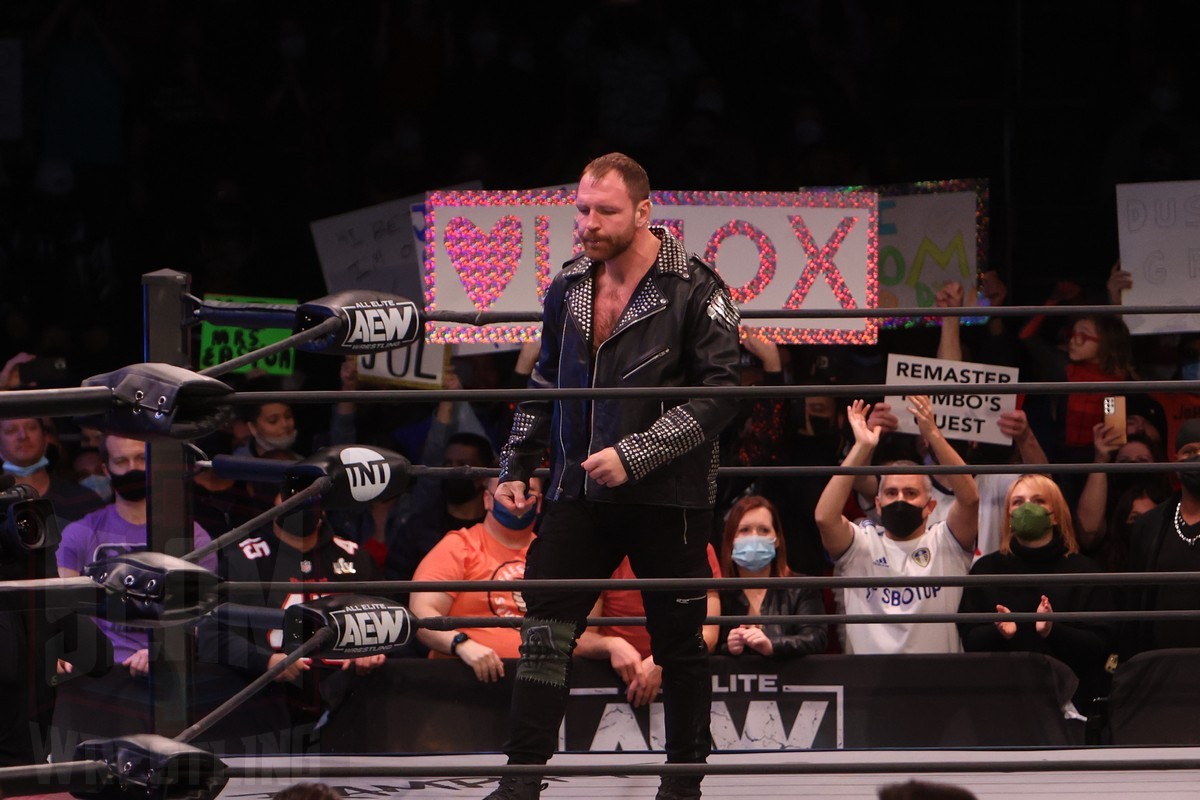 Mox is so excited he gathers up a steel chair and throws it into the ring before he jumps through the ropes.

“He looks like Rob Halford with that jacket on,” says Chris Jericho.

Speaking of the great Judas Priest here’s one of my fave songs by them along with the autograph Rob signed for me back in 2000.

Page shoves Moxley off and that has Moxley doing a double take. The crowd begins cheering for Moxley as Page gets in his face. Mox lights up Page’s chest with some chops and a running back elbow. In one of the corners, Moxley takes a bite out of Page’s head. A shoulder tackle knocks Moxley to the floor where he smashes his head off the ringside table. The table breaks in half…a little too easily. What could it all mean?

Moxley turns things around with some chops and running Page into the ringside barrier. Moxley gets his leg caught in the ropes though so Page puts a hurting on it. 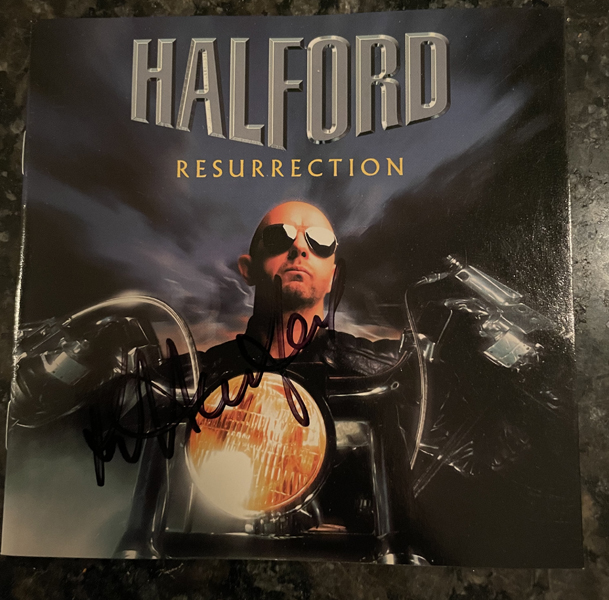 Moxley charges at Page. Page moves out of the way. Moxley hits the steel ring post with his shoulder falling to the arena floor. Page attacks wrapping Moxley’s arm around the ringside barrier then hurls him over it into the first row.

Back in the ring, Moxley is fired up and pissed off. He gives Page three German Suplexes but misses a King Kong Lariat off the ropes. The two get into a slugfest. Moxley laughs asking Page for the best he can deliver. Moxley takes it and smiles.

Moxley kicks out of a brainbuster. Page wraps him into single-leg crab to work the knee over some more. A low bridge on Page gives Moxley the chance to dive onto Page on the floor. An avalanche powerslam from the second rope rearranges Moxley’s spine. Moxley fights back with a barrage of knees and a bulldog choke submission to win the match. Man, Moxley barely escaped with his life. Page is confused and stunned. Moxley puts him night-night with a Paradigm Shift. 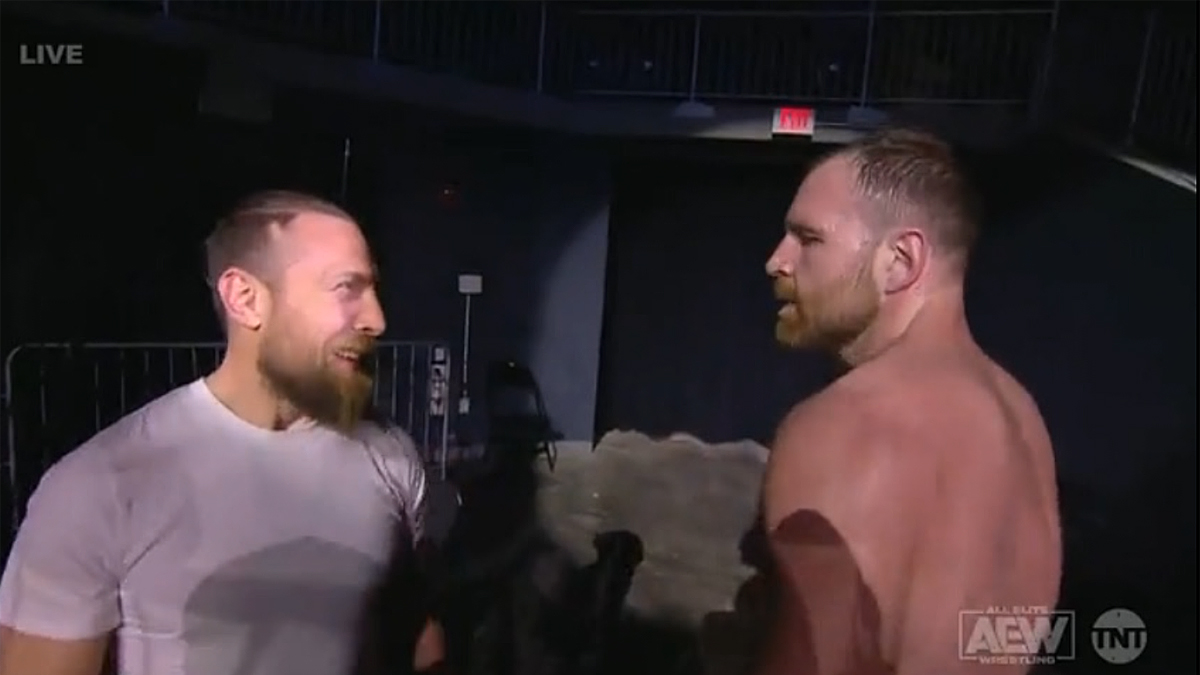 Bryan Danielson meets Moxley as he exits the arena. Danielson claps as Moxley walks on by.

This match is an example of what AEW gets wrong. These, for lack of a better term, “Young Bucks Matches” where the talent no-sells devastating moves that normally would put people away and kicks out of everything and anything needs to end. AEW had been doing well moving away from this kind of wrestling mindset but here it is creeping back into their promotion. Ugh.

Get rid of this crap, AEW.

Nick Jackson has pom-poms on his gear. Yes, I said pom-poms. What a douche bag. 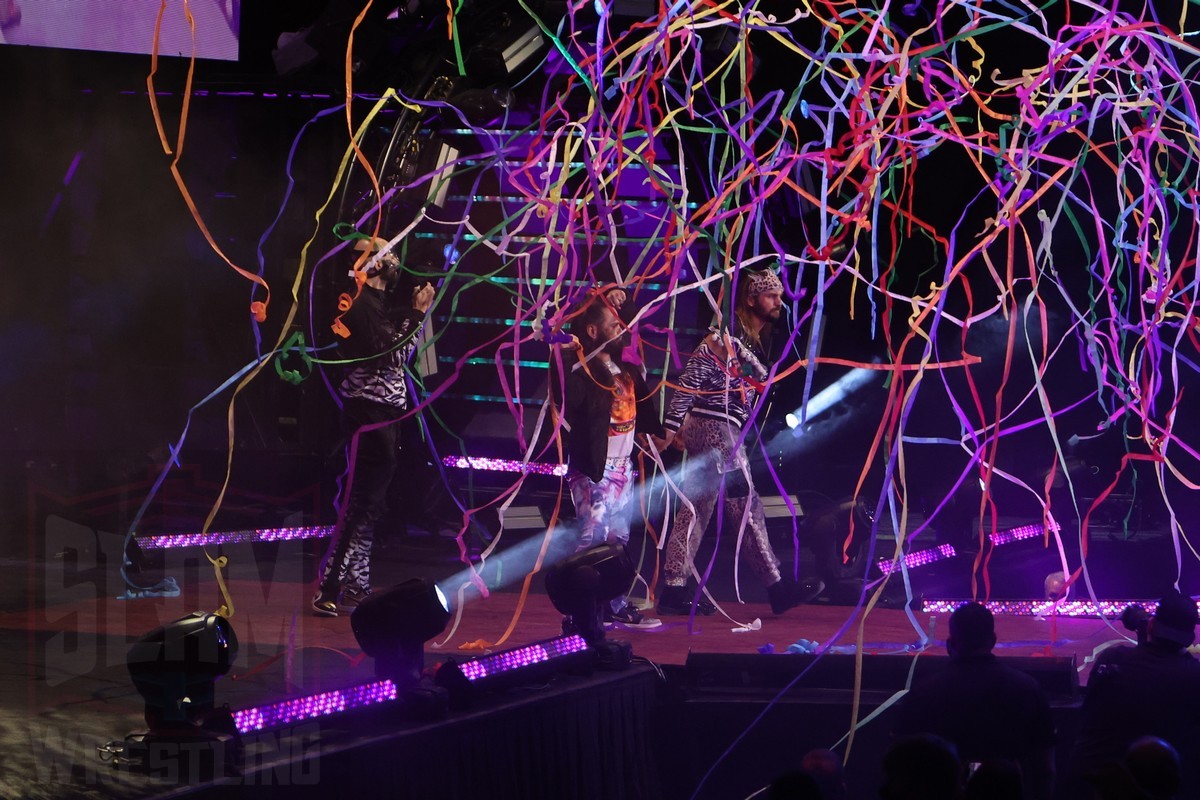 The Young Bucks head to the ring at AEW Rampage, at the Walter E. Washington Convention Center in Washington, DC, on Friday, January 21, 2022. Photo by George Tahinos, https://georgetahinos.smugmug.com   MORE PHOTOS IN THE GALLERY!

Although they have fought in various tag team wars this is the first time these two have met in a singles match. Beretta slows down Jackson with chops in a corner and an overhead throw that sends him out of the ring. Jackson guillotines Beretta on the ropes. Beretta catches him coming in with a Northern Lights Suplex. Beretta leaps at Jackson only to land in the actual ropes. He lays on apron dazed. A neckbreaker in the ropes and a kick to the back of neck from Jackson turns Beretta into a crumpled wreck on the floor. Jackson lays on apron and smiles.

Beretta blocks a senton by putting his knees up. A running knee strike gets Beretta a two count. Forearm after forearm in the ropes sinks Jackson. Jackson is fine moments later when he gets clobbered on the floor by Beretta. Beretta gets another two count with a tornado DDT off the ropes. Jackson pulls the official in the way. Both men hit each other with German Suplexes. Beretta kicks out of a Canadian Destroyer. A frustrated Jackson lays some punches on Beretta. Jackson naturally kicks out of a brutal piledriver as if he were slapped across the face instead of driven into the mat. Jackson back body drops Beretta onto the rampway and then delivers a senton on the rampway and a 450 splash in the ring. Beretta naturally kicks out. Jackson misses a super kick. Beretta pins him with his finisher.

Mercedes Martinez puts Thunder Rosa and the rest of the AEW women’s locker room on notice.

Serpentico shoot the webs out of his hands and Hook attacks immediately. Serpentico doesn’t even have time to take off his entrance attire.

QT Marshall, of all people, comes out berating Hook for taking shortcuts to win his matches. Hook just walks right up to Marshall and suplexes him on the entrance way. 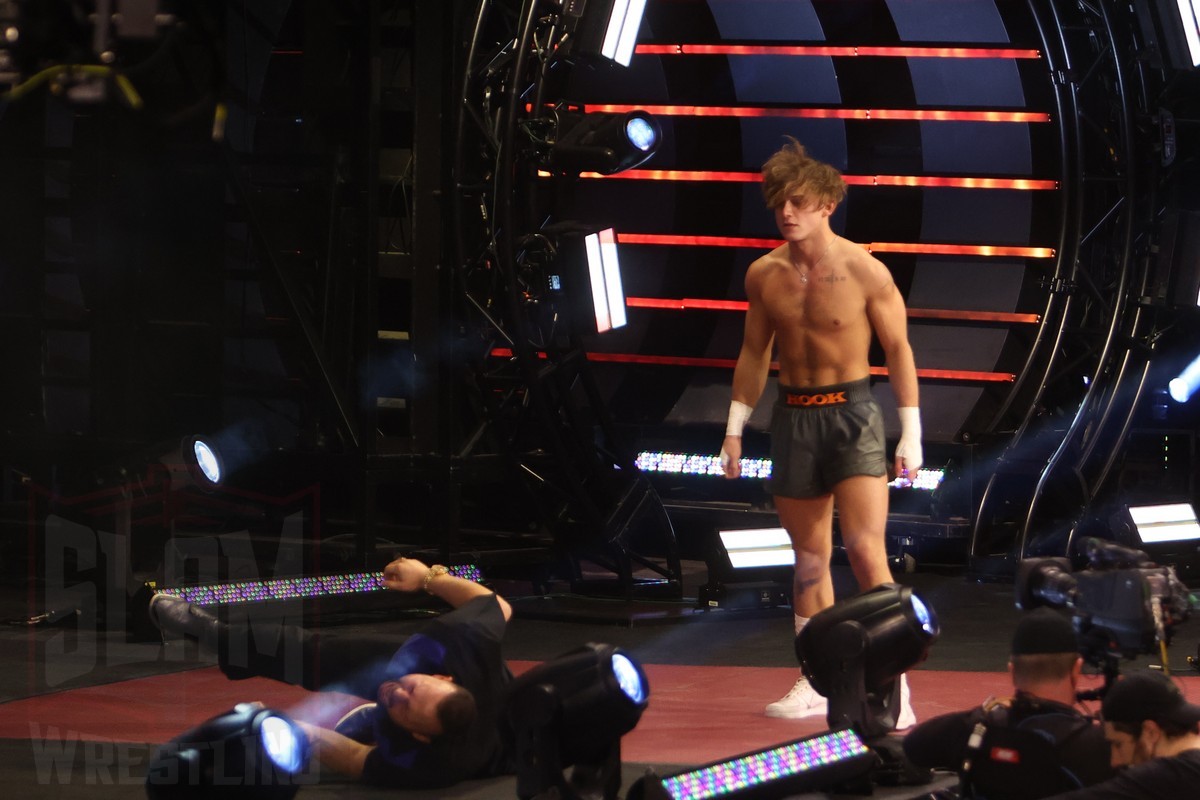 Hook deals with an annoying QT Marshall at AEW Rampage, at the Walter E. Washington Convention Center in Washington, DC, on Friday, January 21, 2022. Photo by George Tahinos, https://georgetahinos.smugmug.com   MORE PHOTOS IN THE GALLERY!

Nothing to shout about this week. I wasn’t really interested in any of these matches except to see how Ethan Page handled Moxley. AEW really needs to feature Page and Scorpio Sky wrestling more. Perhaps they need to be in the tag team picture or something. It seems to be a waste of talent having them do promos and nothing more considering Scorpio is one of the best wrestlers AEW has at the present time. They both need and deserve pushes.