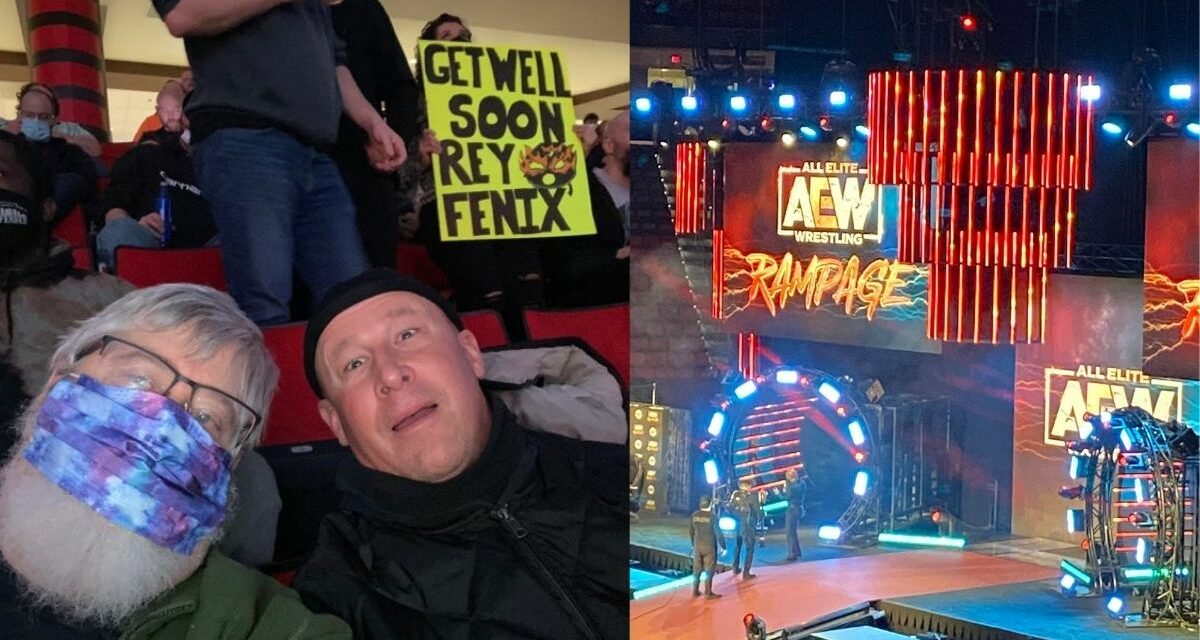 RALEIGH, NC — I attended my first live wrestling show in February 1970 at the War Memorial Arena in Johnstown, PA. This was the old Pittsburgh territory and featured a main event of Bruno Sammartino and The Battman versus Ivan Koloff and Professor Toru Tanaka. There were maybe 2,000 fans, we parked on the street to save a dollar, and sodas and hotdogs were like a quarter. The line to get in was manageable and moved fast as ticket takers ripped the tickets.

Since then I have attended countless shows in various old territories, from WWE pay-per-views and live RAW events, WCW Nitro and PPVs, ECW events, and likely 1,000 indie shows, plus ones I promoted.

On Wednesday, January 12, 2022, I went to PNC Arena in Raleigh, NC, for the whole AEW Live Dynamite experience, which included the taping of Rampage and AEW Dark. I went with GOUGE champion Seymour Snott, as my wife got me tickets for Christmas.

As a decidedly old-school fan, who has also wrestled, managed and promoted, SlamWrestling.net asked for my take on AEW. Here goes!

First the lines, it was a long line to get in there, then there were mask requirements with staff passing out masks. All tickets were virtual and on phones and old guys like me struggled to get the tickets to quickly appear on their phones, so that slowed entry.

Then the metal detectors also slowed some down and we watched a few guys with fanny packs sent back to their cars as they had to be clear.

Once inside there were long lines at all the gimmick tables as fans wanted to get the newest CM Punk or Hook T shirt.

The beer and food lines were long but moved. We waited at the Shake Shack stand to get a tiny burger and maybe 10 fries and a soda for $20. We got to our seats with time to eat before the AEW internet dark matches started.

The crowd was smaller than I anticipated, maybe 6,000-7,000. The ring announcer was very fan interactive and a series of quick squash matches began featuring mostly AEW mid-card talent against local or regional indie talent.

While I wasn’t familiar with all the local talent I was very proud to see former GOUGE champion and trainee T.I.M. worked a tag match versus the Gunn Club, He got a lot of offence in and even some signature moves before taking the pin. LaBron Kozone, a frequent GOUGE performer, wrestled Frankie Kazarian and fared no better but at least got in some offense. 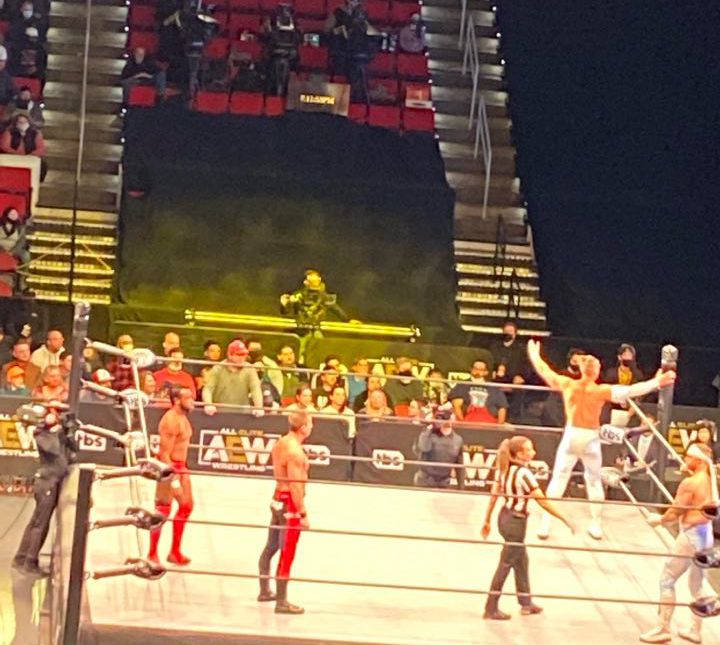 The view from our seats offered a good view of the hard camera area too. Photo by Greg Mosorjak

Of the dark matches Ruby Soho was by far the most over, with the crowd singing along to her song. An observation the non-roster talent not only didn’t get entrance music but entered from the back around the side of the jumbotron entrance ramp.

Things were well-timed and matches started at 7 p.m. and were finished before 7:45 p.m.

One thing in between of note was that AEW owner Tony Khan came out on stage thanked the crowd. He was enthusiastic and asked fans to stay for the Rampage taping after the live show.

AEW Dynamite opened with an Adam Cole, Bobby Fish, Kyle O’Reilly promo that was unsurprisingly interrupted by the Young Bucks and Brandon Cutler teasing a rift until the Best Friends came out and a battle insured. Britt Baker appeared and joined the Cole crew. Adam Cole is very over but more in a babyface way not a heel. Orange Cassidy is also very over. The best friends include former GOUGE wrestler Wheeler Yuta.

Wardlow with MJF taking on CM Punk was next. Punk was very over, Wardlaw hit seven power bombs and seemed on way to victory but MJF kept interfering and even had Wardlow powerbomb Punk through a ringside table. Not surprising Punk caught Wardlow in a small package for the win. MJF and Wardlow had a rift and this alliance isn’t going to last long.

Powerhouse Hobbs met Dante Martin next. In no universe should Martin be able to beat the bigger stronger Hobbs. So Martin wins. There was no heat for this match.

This was followed by a series of backstage interviews with Chris Jericho, Eddie Kingston Sammy Guevara and the rest of their entourage.

MJF appeared on the ramp, setting up a match for next week with CM Punk versus Shawn Spears. MJF is super-over as a top heel.

AEW champ Adam Page came out cut a promo was interrupted by Dan Lambert and eventually Page is jumped by “The Murder Hawk” Lance Archer, who hit his Blackout move on Page through the chair. Page was way over as a babyface.

Another backstage promo has Arn Anderson, his son Brock, and Lee Johnson getting interrupted by Tully Blanchard and FTR setting up a future match. Not sure why FTR didn’t wrestle on the show as Dax Hardwood was a long time GOUGE star and headlined many Raleigh shows for me.

NWA Women’s champ Serena Deeb quickly beat Hikaru Shida in a match that really did not get the fans involved.

Matt Hardy went against Penta El Zero M in what was probably the best match of the night. Hardy was way over even as a heel, he’s a long time fixture in Raleigh and fans remember and loved him. Excellent psychology in this match from the comedy spot to start it with Hardy deleting the Penta chants. Hardy missed a moonsault and Penta hit his Fear Factor pile driver for the win. Both wrestlers were super over with the crowd. After the match Penta was attacked by Malaki Black and then saved by the Varsity Blondes until Brody King appeared to save Malaki. Lots of lights going off here.

The Acclaimed beat Bear Country in a tag match where most fans took a bathroom break or chatted amongst themselves. The Acclaimed won, to no one’s surprise, and everyone around me had no idea who Bear Country was. Sting and Darby Allin attacked the Acclaimed after the match, and Sting is still very over.

Sammy Guevara versus Daniel Garcia for the Interim TNT Title was the finale of Dynamite. Up until now, Garcia never impressed me, but that changed tonight. He stayed with Guevara most of the match and it was a good match. Chris Jericho and Eddie Kingston were at ringside for star power or to add to their angle. The crowd sang along to Jericho’s song when he came to the ring prior to Guevara. In the end Guevara hit his finisher and won. Afterward former NWA promoter/TV commentator David Crockett presented Sammy with the belt.

After this match they peeled multiple layers off the ring preparing for Rampage, and to distract, Tony Khan came out again thanked the fans and teased upcoming things. I won’t spoil the Ramage results but more Adam Cole, and another Jericho sing along.

Overall, I will say that AEW was a good experience. They are very fan friendly and Tony Khan comes off a whole lot more humble and likeable compared to Vince McMahon. The timing on the matches was perfect and live you are not annoyed by the picture in picture commercial breaks. A lot of the talent interacted with the fans at ringside like Rudy Soho, Eddie Kingston and Matt Hardy.

It was so nice to see wrestlers who over the years worked for me get pushes or chances. I’ve seen plenty of the pyrotechnics and big entranceways before and AEW does that well.

I truly think their fan friendly attitude is what will keep them growing and flourishing as a top wrestling company. I will go again.

AEW Dynamite: A King in the House of Black, plus an interim belt up for grabs