AEW Dynamite: A King in the House of Black, plus an interim belt up for grabs 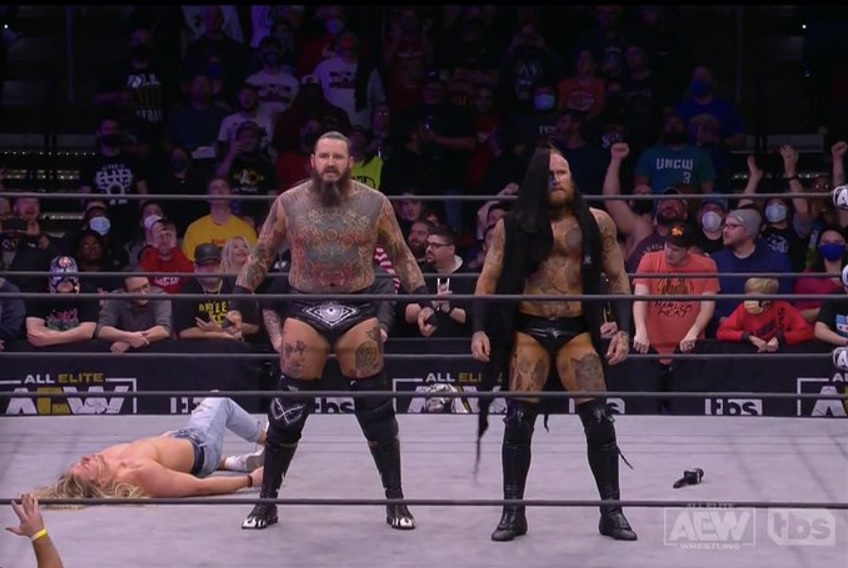 Jacksonville might be the home of AEW, but North Carolina is one of the homes of pro wrestling, full stop. That’s relevant because AEW Dynamite is airing tonight from Raleigh, and while I wouldn’t expect Ric Flair to appear or anything, who knows? The Forbidden Door, am I right? Jokes aside, tonight’s card looks pretty promising, with a title match (sort of) and CM Punk in action, so let’s get going, live on TBS.

Adam Cole has Kyle O’Reilly and Bobby Fish by his side as he heads for the ring. Who’s ready for story time with Adam Cole, bay-bay? That’s a rhetorical question. Cole reminds us that he’s undefeated in singles competition since his arrival in AEW, and his buddies are the baddest team around, making it a new era in AEW. The Young Bucks want to join them even though they weren’t invited, which seems to annoy O’Reilly, who says they didn’t need the Bucks’ help against the Super Friends. Be that as it may, Matt Jackson says AEW is their company, and the Bucks are the longest reigning tag team champs in the promotion, and it’s their New Year’s resolution to reacquire the belts. Funny, says reDRagon, they have the exact same resolution! Cole thinks a little bit of friendly competition is good, and makes them a better faction than any other, especially the Best Friends. When that group heads down the ramp, Cole wonders what Orange Cassidy could have to say that’s of any interest, but Orange came to fight, not talk. A low blow leaves Cassidy down in pain, and when Kris Statlander runs down to confront Cole, his real life squeeze Britt Baker takes care of that problem for her man, hitting a Stomp on Statlander. The now apparently expanded SuperKliq stands tall to end the segment as Cole and Baker share a quick kiss. Interesting.

A video package hypes up Wardlow, not that he needs it given what I’ve seen from the reaction he usually gets on Twitter.

MJF comes out ahead of Wardlow, no surprise since despite his rough treatment of Mr. Mayhem as of late, he’s shown no qualms about hiding behind him to avoid Punk. Lasting more than the first few minutes means Punk is doing better than most of Wardlow’s opponents during his current 18-match winning streak, so good job CM. While it’s a back and forth affair at first, a momentary distraction from MJF allows Wardlow to start conducting a Powerbomb Symphony, and after five powerbombs, he’s ready to pin Punk. But wait: MJF says no, as he wants more powerbombs. An annoyed Wardlow does as he’s told, delivering a sixth and seventh powerbomb. Is that enough? Apparently not, as MJF orders Wardlow to powerbomb Punk through a table on the floor. Referee Aubrey Edwards begins her count, and it looks like it’ll be an impossible task for Punk to return to the ring before 10 — but he does it. An unsatisfied MJF wants more powerbombs, but Punk is able to pull off an inside cradle and hold on for an unlikely three count. 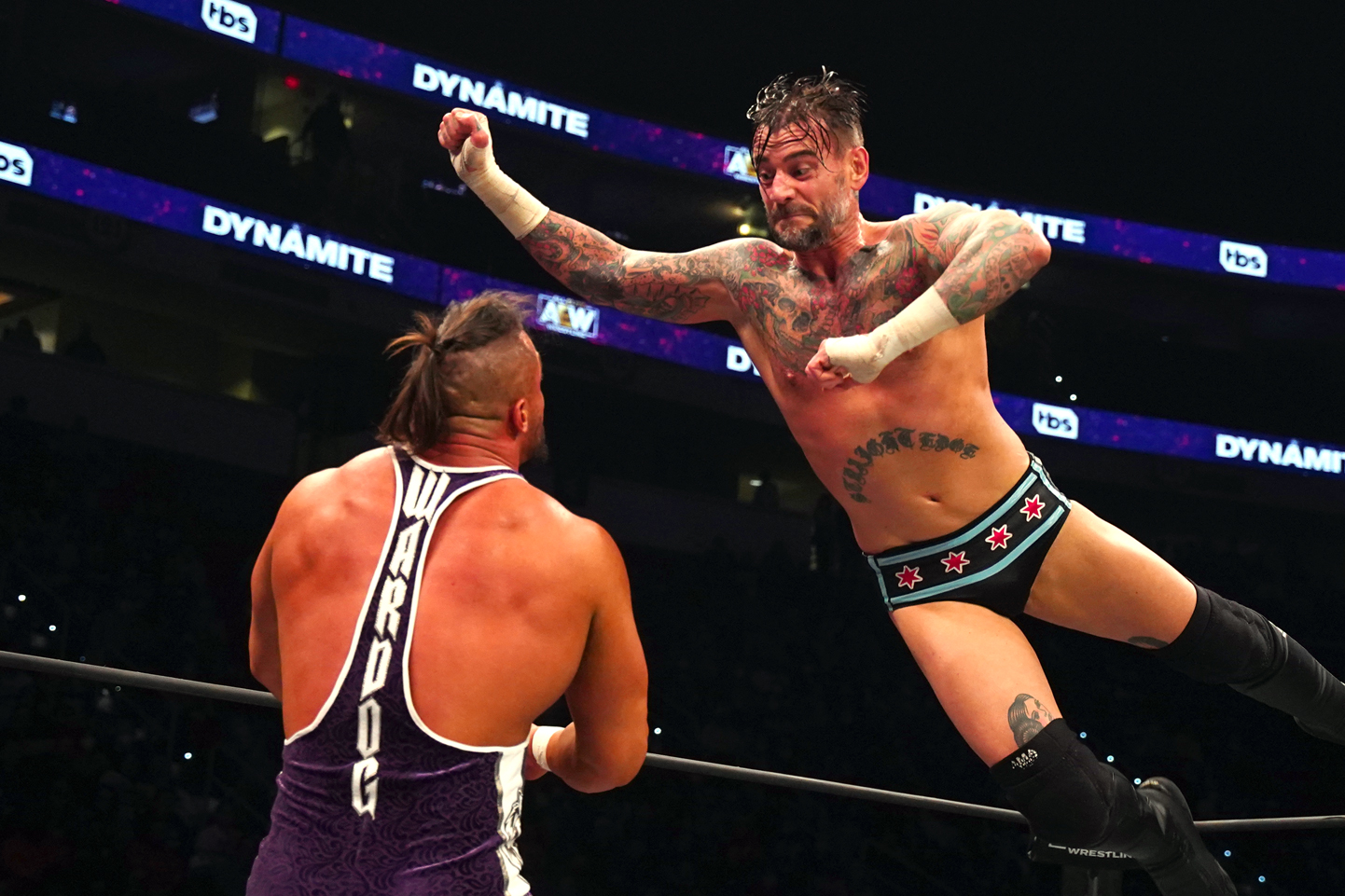 An enraged MJF is almost literally foaming at the month as he accuses Wardlow of never winning the big match. This is going to be the biggest face turn in AEW to date when it happens, but it won’t be today, as Shawn Spears hustles to broker enough peace for Wardlow to head to the back without throwing shots at his boss.

Tazz joins the announcers and humorously notes that he doesn’t have a good law team, but he doesn’t have to wait long for his man Hobbs and Martin to collide as they go right after each other even before the bell rings. The power of Hobbs (slightly related to the power of Grayskull, according to my intern) looks like it may overwhelm Martin, but Dante’s shtick is all about overcoming these kinds of odds. Ricky Starks has plans of interfering, but he’s interrupted by Jay Lethal, and Martin takes advantage of the confusion to steal a win. Lot of that going on tonight already.

Alex Marvez asks Chris Jericho about PWI naming the Inner Circle its Faction of the Year for 2021, and Le Champion is not surprised. He promises that the Inner Circle will take care of 2.0 if they get involved, but Eddie Kingston wants to get his own pound of flesh from Daniel Garcia. He also seems to want to stir up trouble between Jericho and Santana and Ortiz, which is something he loves doing. Jericho puts Kingston on notice: If he wants to go to the ring, he can, but if 2.0 gets involved, Jericho is going to kick their asses, and if Kingston does the same, Le Champion might kick his ass too.

We interrupt your regularly scheduled Dynamite to listen to MJF rant about Punk’s fluke victory. Along with insulting the crowd, he declares that next week it’ll be the match everyone’s been waiting for … Punk vs. Spears. Surprise, surprise.

The SuperKliq welcomes back the good Dr. Baker so she can challenge Cassidy and Statlander to a mixed tag team match next week against her and Cole. Oh, and poor Brandon Cutler gets verbally abused for like the 95th consecutive week. Maybe he’ll make a Wardlow-like stand against his oppressors at some point? Nah, probably not.

Who will AEW World Champion Adam Page feud with next? Maybe one of Dan Lambert’s flunkies, since he comes out to talk on the microphone. Lambert actually compliments Page for his wrestling prowess, but he expresses his opinion that the Hangman is a fake cowboy. Of course, Lambert isn’t about to get in the ring and back up his tough talk, but as he turns to leave, he’s cut off by Lance Archer, making his return after some time away to heal up from injuries. Though he menaces Lambert, Archer quickly turns to assaulting the champ, finishing his rampage with a Blackout onto a steel chair. Print out one yike certificate for Page. 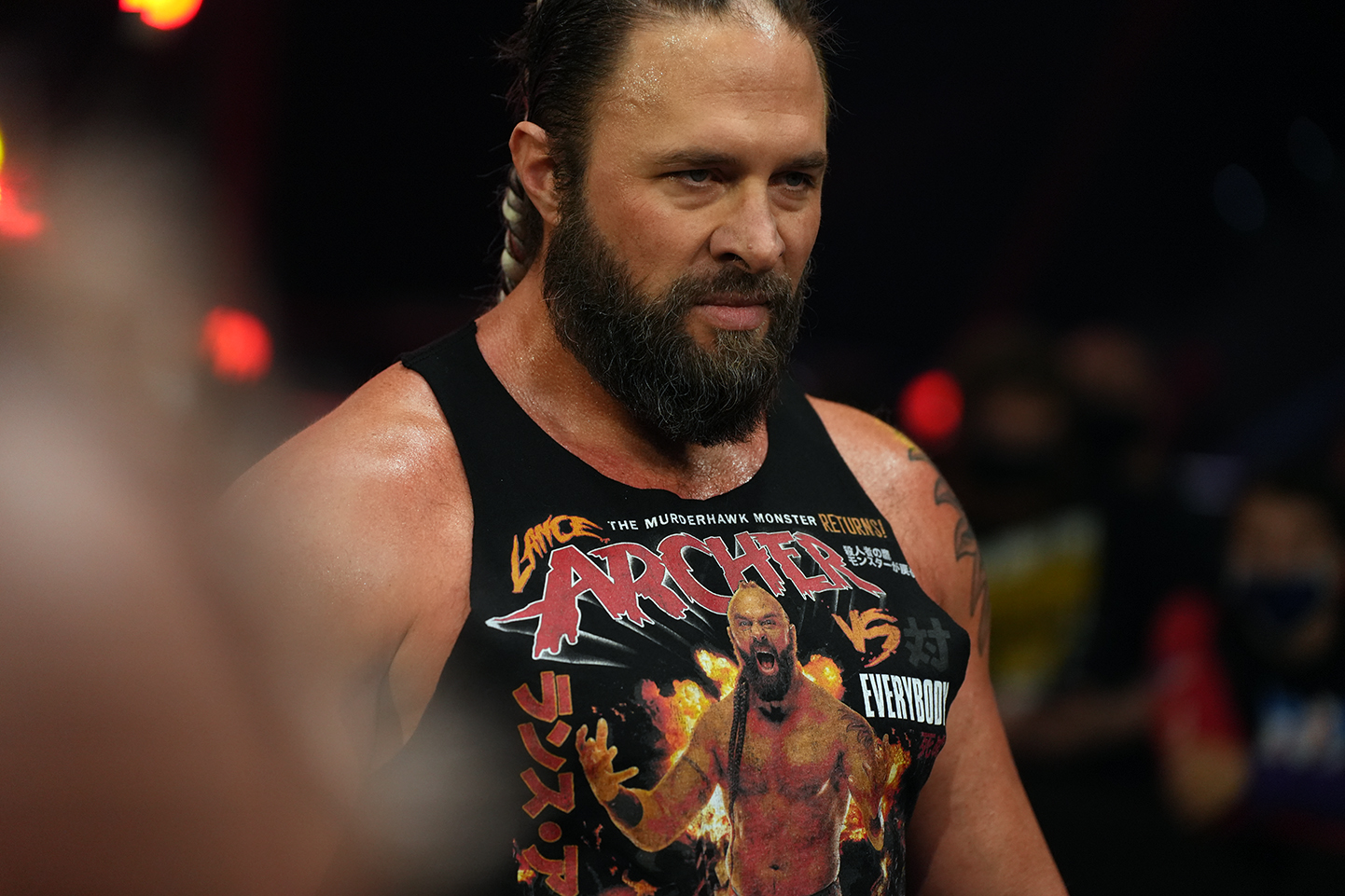 Raleigh is Horsemen Country, there’s no denying it. Alas, two of the Four Horsemen are on opposite sides of the face/heel dynamic, and because of that, we’re getting FTR vs. Lee Johnson and Brock Anderson next week. OK, cool.

All hail the first ever TBS champion, who did exactly what she said she would do. Now it really could be That Bitch Show, because who’s arguing with her?

This is one feud that’s running very hot, though the fan reaction is at a slightly lower temperature. Deeb hits Shida with a blindside shot to the knee while coming down the ramp, but the former champ guts her way into the ring and tells the ref she can fight. That might be a mistake, as she never gets in any offense and is eventually forced to tap out.

A doctor comes to check on Shida, but Deeb runs him off with a kendo stick and just starts going crazy on Shida. Several additional referees head to the ring to force Deeb to stop her attack and send her to the back. 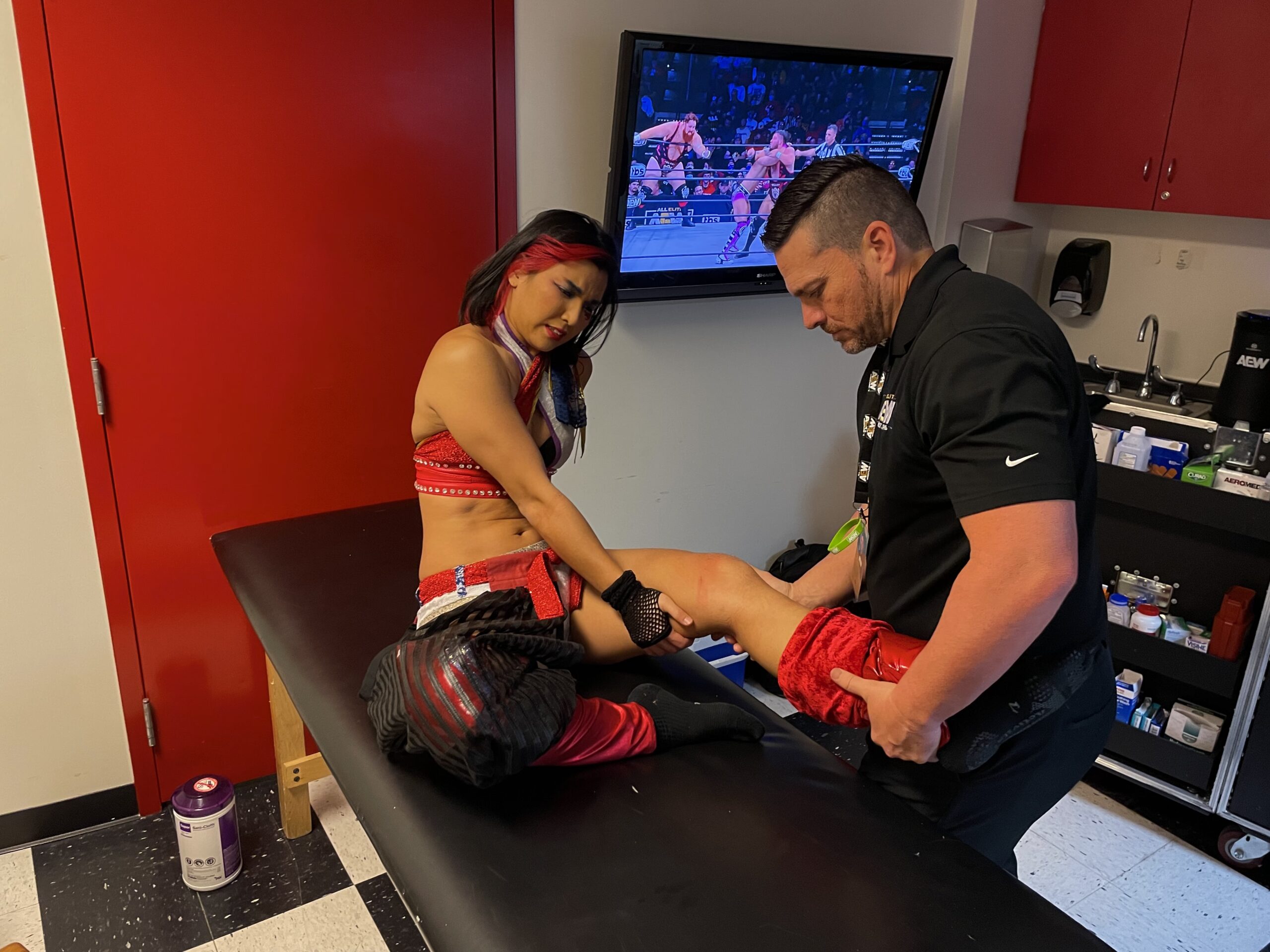 Tony Schiavone wants a word with new tag team champions Jungle Boy and Luchasaurus, who say they’ll take on any top five team who wants a shot at the titles. John Silver and Alex Reynolds drop in to make a challenge for Rampage, and it’s quickly accepted.

Hardy’s family is in attendance as he promises to delete Penta and send him to the hospital to be with his brother, Rey Fenix. This is also Hardy Country, and with Private Party in his corner, he might get a ‘W’ in front of his fans. But after a nice match, Penta ends up earning the three count.

Via Abrahantes, Penta calls out Malakai Black, which ends up setting off quite the chain of events. First Black materializes to beat on Penta, who just finished his match. Then the Varsity Blonds run down to regain the upper hand for the faces. But then, a surprise: The lights go out and turn back on to reveal Brody King. Well that’s unexpected. The House of Black may finally be coming into focus as King helps Black beat on the faces some more.

Schiavone is on hand to hear some tension between Statlander and Leyla Hirsch, forcing Red Velvet to step in and get them to promise to be cool before they team together on Rampage.

The Acclaimed vs. Bear Country

No disrespect to Bear Country, but they’re one of those teams I forget exist for weeks at a time. They’re in a big spot here, I suppose, since The Acclaimed are the top ranked challengers for the tag team titles, but they don’t last too far past a commercial break before losing.

Winners: The Acclaimed by pinfall

Ah, but maybe Max Caster should have left Sting and Darby Allin’s names out of his mouth during his rap. Sting approaches from the stage, bat in hand, while Allin appears to attack from behind. The painted ones get the better of a brief scrap in the ring.

A spooky message from Pac makes it sound like his vision may never recover. He should come back and take on a gimmick like Daredevil. Do it up, AEW.

Displeased about losing in his home state, Hardy tells Schiavone he may have to refocus on himself. Before he can elaborate, Andrade El Idolo stops by to talk common interests, including their mutual love of money. Hardy is intrigued enough to leave with him to talk business.

David Crockett is once again in attendance to present the title to the winner. Jericho and Kingston are both ringside as well, as they promised. The announcers put over the fact that despite being heels, they admire the way Garcia and 2.0 have gone right after what they’ve wanted, not showing any signs of being intimidated by the longer tenured AEW stars. It’s true, they’ve been booked in excellent fashion so far, and that continues in this main event as Garcia looks very strong. Guevara sends a message to the absent TNT champion with a Cross Rhodes, but it isn’t enough to put Garcia away. Then my video feed goes out, but I have enough audio left to know that Sammy retains.

Apologies for that abrupt ending thank to a technical snafu, but you’ll have this sometimes. See you in seven!

This episode felt a little busy overall, and there were long gaps between wrestling matches at times, which was noticeable because Dynamite is typically very well paced. Not every show can be a home run when you do weekly TV, of course, so the occasional single is fine. The constant inching toward Wardlow turning on MJF was probably the highlight, and it’s going to be awesome when he finally does it.