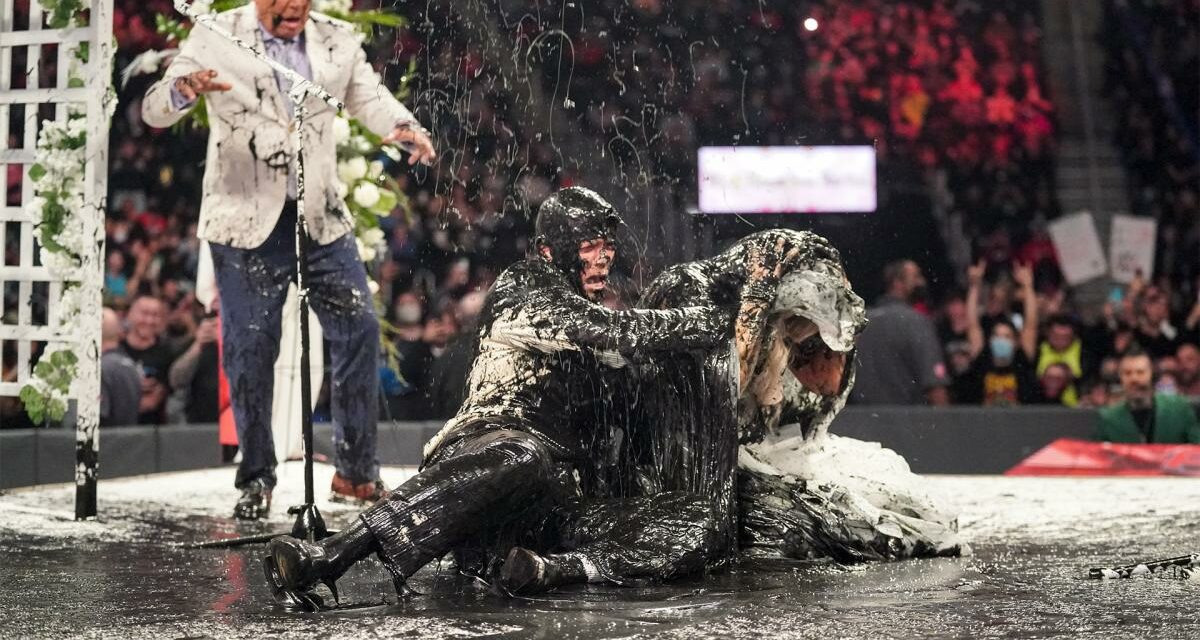 WWE Day 1 is fast approaching this Saturday, falling on day one of the new year. I see what they did there. Tonight on RAW, Miz and Maryse will renew their wedding vows for the new year. We will also find out what tag team will face RK-Bro for the tag team titles. Onto the show.

Riddle, all ready for his New Year’s Eve party, and Orton head to the ring. Riddle hypes the crowd promising they will love what happens in 2022. Orton doesn’t want to look into the future. All he wants for the new year is to beat Otis tonight and then retain their titles on Saturday.  Orton wants to show Riddle what happened last week and has the truck run the footage. Riddle thinks Otis might not be able to take an RKO.

The Alpha Academy, Chad Gable and Otis, interrupt. Gable is so proud of his prize student, Otis. He also brags about earning his Master’s degree. Riddle wants to show Randy what he knows by taking on Gable right now. He tells Orton not to worry.

Gable takes Riddle down with a waist lock and uses his technical prowess to get a near fall. Riddle kicks Gable into the corner, but then gets whipped across the ring. Gable with a dragon screw through the ropes. Gable with a tiger suplex that only scores a two count. Gable goes up top. Riddle counters Gable coming off the ropes with a triangle. Gable rolls through into an ankle lock. Riddle breaks free connects with a kick and hits the Floating Bro. Riddle covers and gets the pin.

After the bell, Otis blasts Riddle in the middle of the ring.

We join the match in progress at Otis blocks on RKO. He hits a splash on Orton in the middle of the ring and Orton is hurt. Otis blocks another RKO, shoving Orton clear out of the ring. Otis looks to capitalize but crashes into the ring steps. Orton stops Otis on the apron and looks for the draping DDT. Orton drives Otis into the mat. Orton wants the RKO. Otis blocks it again and slams Orton hard to the mat. He drags Orton to the corner and goes to the middle rope. Orton rolls away from the splash and pops up to deliver the RKO. He covers Otis and gets the pin.

Riddle is so happy that Orton hit the RKO and now it’s time for his present. Riddle wants to give him a big old hug. The crowd wants it. They embrace and the crowd goes wild. Orton feints at an RKO, but he’s just playing.

Kevin Patrick is with Kevin Owens and ha a message from WWE champion, Big E. This is about walking out of Day 1 champion. Owens flat out says Big E is wrong. Owens is actually here and this is his story. He will win the WWE title.

Truth and Tamina aren’t even close to being on the same page, arguing over who is going to start off the match. Reggie falls for the hand shake and Truth gets him in a head lock. Reggie dodges a clothesline and connects with a back elbow. The two collide and Truth tags in Tamina. She super kicks Reggie before Dana can get in the ring. Brooke with a flurry of kicks and a drop kick to the face. Tamina with a back elbow. Truth makes a blind tag and Reggie has to come in. Reggie with a victory bomb and gets the pin.

After the match, Tamina tries to attack Truth and then Reggie. Brooke hits her with a back handspring elbow.

Nikki A.S.H. isn’t upset that she was banned from ringside last week. She tells Megan Morant that Rhea Ripley won without her there. Ripley has helped get Nikki in the right frame off mind and they are a stronger tag team for it. Nikki challenges the tag team champs to a rematch.

The Street Profits vs. Rey and Dominik Mysterio – RK-Bronament Finals

Miz demands better flowers for his vow renewal ceremony. He had to call in some big favors, like bringing in Eric Bischoff to officiate the ceremony. He says this will be must see TV.

AJ Styles is in the ring and wants to know where Omos is. Maybe Omos is scared. He needs to pay his dues and AJ is collecting. NXT superstar Grayson Waller is in the front row and Styles invites him into the ring. AJ introduces Grayson to the WWE Universe.  Waller likes it here and will gladly take his spot when Omos destroys him.

Apollo Crews interrupts with Commander Azeez. The Commander challenges AJ to a match.

Megan Morant wants to know if Carmella will accept Nikki’s challenge. Carmella accepts on behalf of her team. They will put Rhea and Nikki back in their place. She calls Nikki almost second best, almost a good partner and almost good enough, but almost doesn’t cut it.

Well during the break, someone changed their mind and now Styles is taking on Apollo. Surprisingly, Azeez doesn’t get involved even when the fights spills to the floor right in front of him. Styles connects with Pele kick in the ring and unloads with the Phenomenal Blitz. He connects with a forearm. Apollo counters the Styles Clash with a sunset flip and hits a power bomb. AJ kicks out of the pin. Styles hits an inverted DDT out of a moonsault. AJ looks for the Phenomenal forearm, but Azeez pulls Crews out of the ring. AJ charges on the apron, only to get dropped with a Death Valley Driver. Crews sets Styles on the turnbuckle, but AJ drop out. Crews lands on his feet out of a suplex. Apollo with an enziguri. AJ with a hurricanrana and then hits the Styles Clash. AJ covers and gets the pin.

Azeez chases Styles out of the ring and then helps Apollo up. The Commander turns around into a Phenomenal Forearm from AJ.

Seth Rollins is in the holiday spirit and gives Kevin Owens all the credit behind the match at Day 1. Why? Because Rollins is going to win and get what he deserves.

Kevin Owens heads to the ring and he is in a great mood. He spent Christmas with his family and he is the only one in the match at Day 1 that is actually in the building. Owens heels on Detroit and is going to show everyone a WWE champion that they could be proud off. Owens put together the perfect plan and will be WWE champion.

MVP walks out and flat out tells Owens he is wrong. The All Mighty Bobby Lashley will be at Day 1 to wreak havoc on everyone. Someone is going to end up in the Hurt Lock and return to the All Mighty Era. Owens says he still feels good; MVP calls him an idiot. The Hurt Business shows up. Cedric hates to admit that KO is right. One man cannot beat three. Think about it. Bobby Lashley was at his best with the Hurt Business. Lashley doesn’t need anyone, but MVP will give them an opportunity. Owens breaks down what we all know and wants Cedric to come to the ring for a match.

Owens takes the fight to Cedric, but then gets clothesline on the ring apron. Owens looks for the pop up power bomb, but Cedric leaps frogs him. Owens goes to the floor and gets hit with a suicide dive. Alexander with a kick from the apron and hits a slingshot flatliner. Owens with a clothesline and follows with the power bomb. He wants MVP to watch as he hits Cedric with the stunner. Owens covers and gets the win.

Shelton Benjamin has something to say in the ring, but KO shuts him up with a stunner.

Earlier today Damien Priest talked with the cameras. He knows he has a dark side, but he does try to keep it at bay. It was fun stomping on Roode’s head even if it cost him the match. Priest knows that rage could cost him against Dolph, but that rage will help him keep the title.

Ziggler immediately hides in the ropes and then tries to hit Priest with a cheap shot. Damien catches the kick and then blocks a Zig Zag. A big boot sends Dolph to the mat. Ziggler with a kick, but Priest answers with a back elbow. He then spills Ziggler over the top rope to the floor. Ziggler gets caught on the floor and Damien dumps him into the time keeper’s area.

After a commercial break, Dolph hits the famouser, but only gets a two count. Priest with a clothesline and the rage starts to boil over. Ziggler takes a Broken Arrow, but is able to kick out of the pin. Ziggler tries to escape the ring and catches Priest with an elbow. Dolph with a DDT. Ziggler taunts Priest and then slaps him in the face. The rage comes out, and Dolph is pummeled against the ropes. He beats Ziggler into the corner and the ref starts a count. At the five count the ref calls for the bell; disqualifying Priest.

Damien keeps attacking after the bell, dropping Dolph on the floor with the Reckoning.

Eric Bischoff is ready for this and introduces the Miz and Maryse to the ring. Miz almost trips up the steps for his ceremony. Maryse comes out in a flowing wedding gown. Miz announces he will dominate Edge at Day 1 so they wanted to do something to cap off his momentous year. Just have Edge run down and ruin the ceremony so we can all get on with out lives. The two exchange vows and Eric Bischoff says the magic words asking if anyone has any objections to speak up.

Edge runs out to the ring. He doesn’t want to ruin anything, he won’t talk about how sappy their vows were or how Miz used his wife as a shield. Edge will just beat Miz at Day 1. Miz wanted to show Edge what true love looks like. Edge hands it to them for embarrassing him. What goes around comes around though. He’s going to embarrass Miz. Edge is just playing mind games. He doesn’t want to spoil anything, but this was supposed to be a white wedding, right? A red light bathes the ring as Miz and Maryse have a Brood Bath dumped all over them. That’s the show; see you in 2022.

The Main Event segment was a renewal of vows ceremony between the Miz and Maryse. Watch the actual matches on YouTube and skip everything else. What an awful way to end 2021.