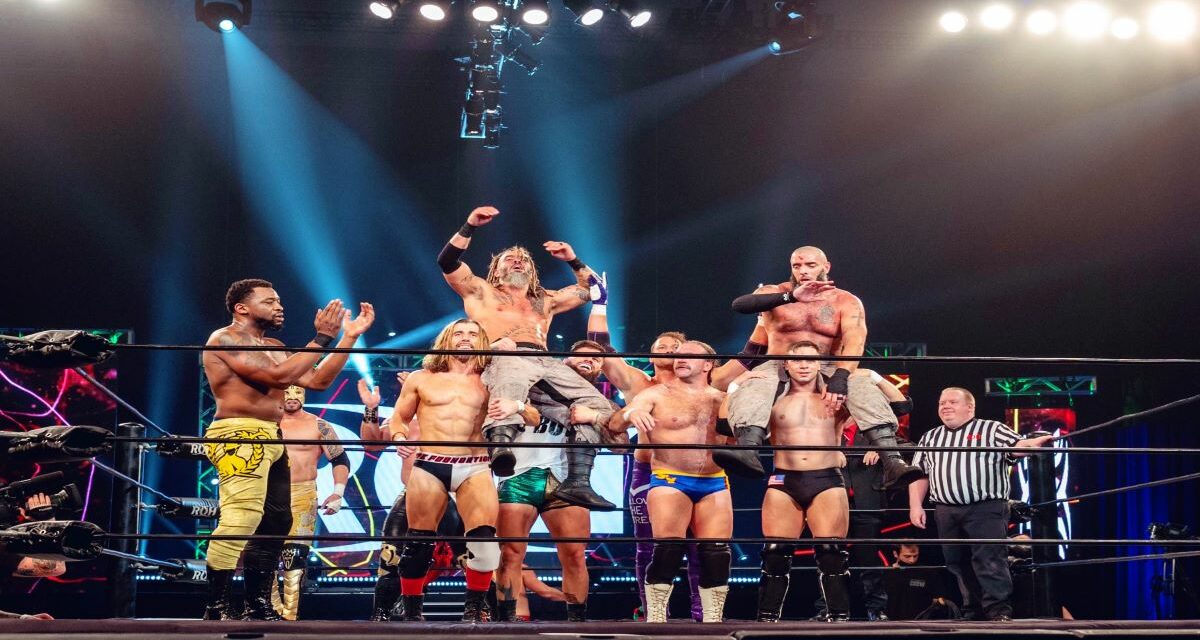 Greetings and salutations everyone and welcome to my weekly ROH TV report. This is the final show for this era of ROH. To report on this show is truly bittersweet and I cannot help but reflect on what ROH has meant to not only myself, but the entire wrestling industry. While WCW was no more, ROH was the alternative to WWE. For years, this was where wrestlers who were “not good enough” for WWE could come and hone their skills in front of an appreciative crowd. The international partnerships that ROH had also introduced fans to international stars and styles of the sport. Without ROH, North American fans would not have been able to watch NJPW starts live unless you went to Japan. Without ROH, the landscape of the wrestling business would be different.

The show started with Quinn McKay introducing us to the action from the ROH studio. While the originally scheduled match for the ROH world title wont be on the show (EC3 vs Bandido), they hyped a 12 man Christmas tag match where the winners will get a Christmas bonus.

We get a promo featuring both team captains. Josh Woods was super keen to pick his team. Josh Woods claims that his team is full of winners. Brian Johnson, the other team captain said that ROH has only given him headaches. Johnson ends this promo by saying regardless of teams, its Mecca vs Everybody.

Ian Riccaboni welcomed us to the show. Maria Bennett is joining the commentary team for this match.

During the entrances, each woman was given promo time. Holidead said that the dark clouds have aligned and it is time for the dark reign. She also said she will be the new ROH Women’s champion. Rok-C in her promo said that she has the advantage because she also has heart. She finished her promo by saying that she will do whatever she has to to retain the ROH Women’s championship.

The Code of Honor is adhered to. After a brief lockup and tussle, Holidead shoved Rok-C to the mat. Rok-C got up and put Holidead on a side headlock. The two continued to trade locks for a while until Holidead applied a vice grip on Rok-C. Rok-C escaped the vice grip and went for a crossface but Holidead broke the submission before it as applied by going to the ropes. Rok-C now with a brief advantage after blocking a kick and and doing a carthweheel and curtsy to play to Holidead. Holidead didnt take kind to that as she hit a head scissors on Rok-C sending her to the outside. On the outside, Rok-C went for a dive but Holidead caught her and slammed her on the ring post.

After the commercial, Holidead was firmly dominating the match. She hits a suplex and a leg drop combo. Holidead then put Rok C on her shoulders and rammed her on the turnbuckles then hit a backbreaker. After a bit of time Rok-C was able to gain the control by finding and connecting with a Lou Thesz Press off the top rope. After Rok-C gained control of the match for a few minutes, Holidead blocked an irish whip and connected with a spine buster, but this was only good for a two count. Holidead got Rok-C on her shoulders but Rok-C escaped and hit a spinning thrust kick along with a Code Rok for the win!

after the match, Rok-C celebrated and both women once again adhere to the Code of Honor.

Dalton Castle said he has a surprise for everyone as his Classy Christmas Spectacular is up next. Castle is seen singing with Dak Draper and the Baby Chicks. Castle asked who wants to be fantastic and Draper responded by saying he does and when he isn’t he likes to break stuff. Castle tells Draper to break the set which he did. The two men just walk off…..

Quinn McKay joined the commentary team for the main event of the final show of this era of ROH. Brian Johnson is out first cutting an anti-Christmas Joy promo. He also said you will 11 bozos and one mecca. Rhett Titus was out next followed by Kenny King, Rey Horus, Homicide, and Flip Gordon. Josh Woods, as captain of the other team is out and he is joined by Silas Young, Matt Taven, Bandido, and the Briscoes.

Homicide and Jay Briscoe started the match being even matched. Woods gets tagged into the match by Jay. Once Homicide took control of the match, h argued with Johnson and eventually tagged in Titus. Titus and Woods shake hands. Titus immediately got a two count on Woods agter a roll over. They wrestle into a tie as we went into commercial.

Watch along with us here: https://t.co/i2jLIS1sG1#WatchROH

Taven was in the ring with Gordon and they wrestled back and forth until Gordon got a two count on Taven after a roll up. Taven tagged in Bandido. After a suplex escape, Gordon tagged in Horus. Horus and Bandido, two storied rivals are in the ring and they went at it for a while showing their great Lucha Abilities. Bandido tagged in Mark Briscoe while Horus tagged in Kenny King. They are quit evenly matched until Mark chopped King in the throat. Mark irish whipped King to the corner but Titus made a blind tag and went into the ring to go one on one with Mark. King took over the match with an atomic drop and a vicious clothesline.

The match erupted into an all out brawl as The Briscoes faced off against King and Titus in the ring while everyone else brawled outside. Mark threw Titus out the ring. Mark hit a blockbuster from the apron on Titus. Jay hit an uppercut on King but King ducked a clothesline attempt and dove onto Mark. Johnson kneed Jay that sent him to the outside. Right before commercial, Taven dove over the ropes and hit King and the Briscoes on the outside.

All men in the match are featured and old rivalries and stories are re-visited. Mark hits the Froggy Bow but King rolls to the outside of th rin to escape the possible pin attempt. Johnson rolled up Mark by holding the tights but was only able to get a two count. Johnson and Mark are in the middle of the ring and trade punches and strikes. Johnson hit a pump kick and Mark immediately responds with a Cutthroat Driver. This left Johnson on dream street which gave the Briscoes time to hit a Doomsday Device on Johnson for the win.

After the match, all of the wrestlers are in the ring hugging each other. Ian Riccaboni mentioned that updates on the future of ROH will be made available on social media as they head into Supercard of Honor in April of 2022. The show ended with a shot of Mark and Jay Briscoe being lifted by all of the wresters.

Thank you for watching honor nation! We love you all ❤️#WatchROH pic.twitter.com/oSHiQB7mUx

I am usually not the biggest fan of multi-man tag matches. They can be super distracting but this match was just fine as it told a great story. The Women’s match, while predictable was a very fun watch. Overall, this was a good way to end ROH TV for now. What the future holds, who knows but I for one cannot wait for April of 2022 to see what this reimagined ROH will be. This is not a goodbye, its a see you soon.

Top Picture: The 12 men of the main event celebrate post match with the Briscoes hoisted in the air. Picture courtesy of @TheMGCMedia