SmackDown moves the needle in the right direction 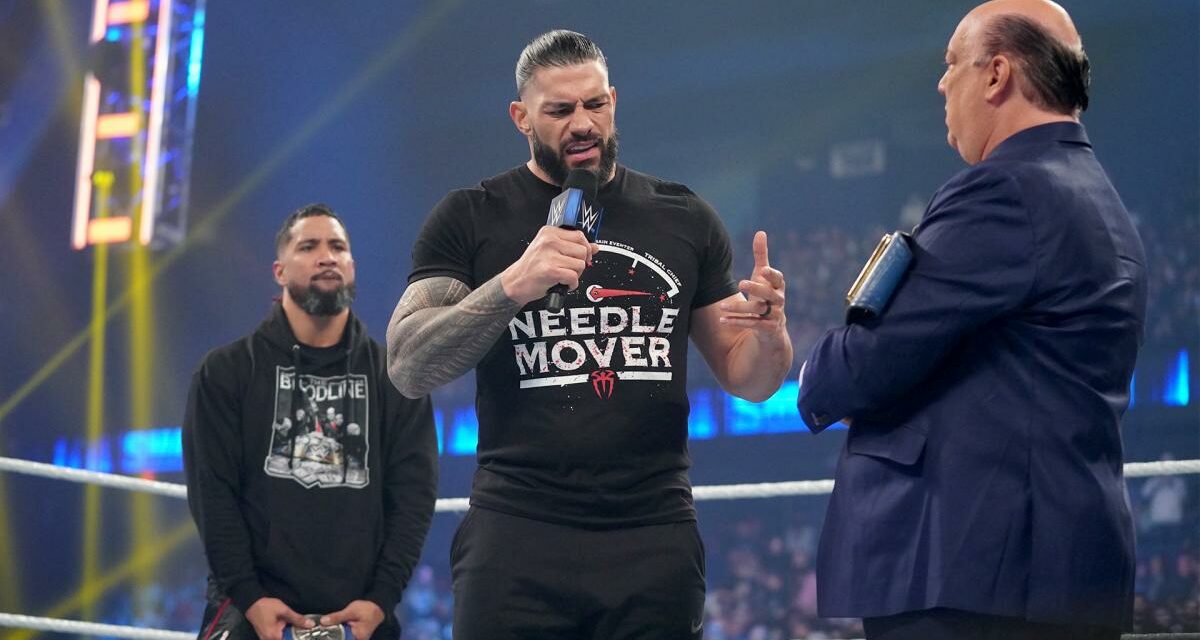 There’s much more meat on the bone in this week’s SmackDown, including some payoff in the Reigns/Lesnar/Heyman saga and the promise of some good matches to come at the Day 1 pay-per-view in just over two weeks’ time.

One immediate improvement is a match to open the show, and one that gives the women’s division some time to work with.

Storm and Shotzi take the first turns in the ring, starting with an aggressive lock-up that sees both women swing back and forth looking for an advantage. A big boot by Storm lays Shotzi out flat, but right after Storm tags Banks into the match Shotzi does the same. Banks, by the way is sporting some Spider-Man gear after having showed up on the red carpet at the No Way Home premiere.

After Banks chops Flair hard, she tags Storm back in to deliver a series of uppercuts to the champ, but Flair is still focused on Banks and she kicks her rival off the apron to the floor. Returning from the break, Shotzi is in the ring and suffering a double suplex from Banks and Storm. Banks delivers a kick to Shotzi’s gut and then gets revenge on Flair by knocking her off the apron as well.

Turning back to Shotzi, though, Banks is brought down by a hard right hand. Flair re-enters the match and gets a two-count with a backbreaker on Sasha. Both teams tag and Storm charges in with a couple of atomic drops, but Flair blindly tags in and throws Storm over her head and sends her rolling to the floor and another commercial break.

After the ads, it’s Banks and Flair again as Charlotte tries another backbreaker, but Sasha reverses it into a crossbody for a two-count. Banks climbs the ropes, but Storm tags in as she does. After Flair dodges a meteroa off the top and sends Sasha to the outside, Storm leaps in with a crossbody but only gets another two-count. Flair climbs the ropes and misser her “always misses” moonsault, and Storm rolls her up for the pin. 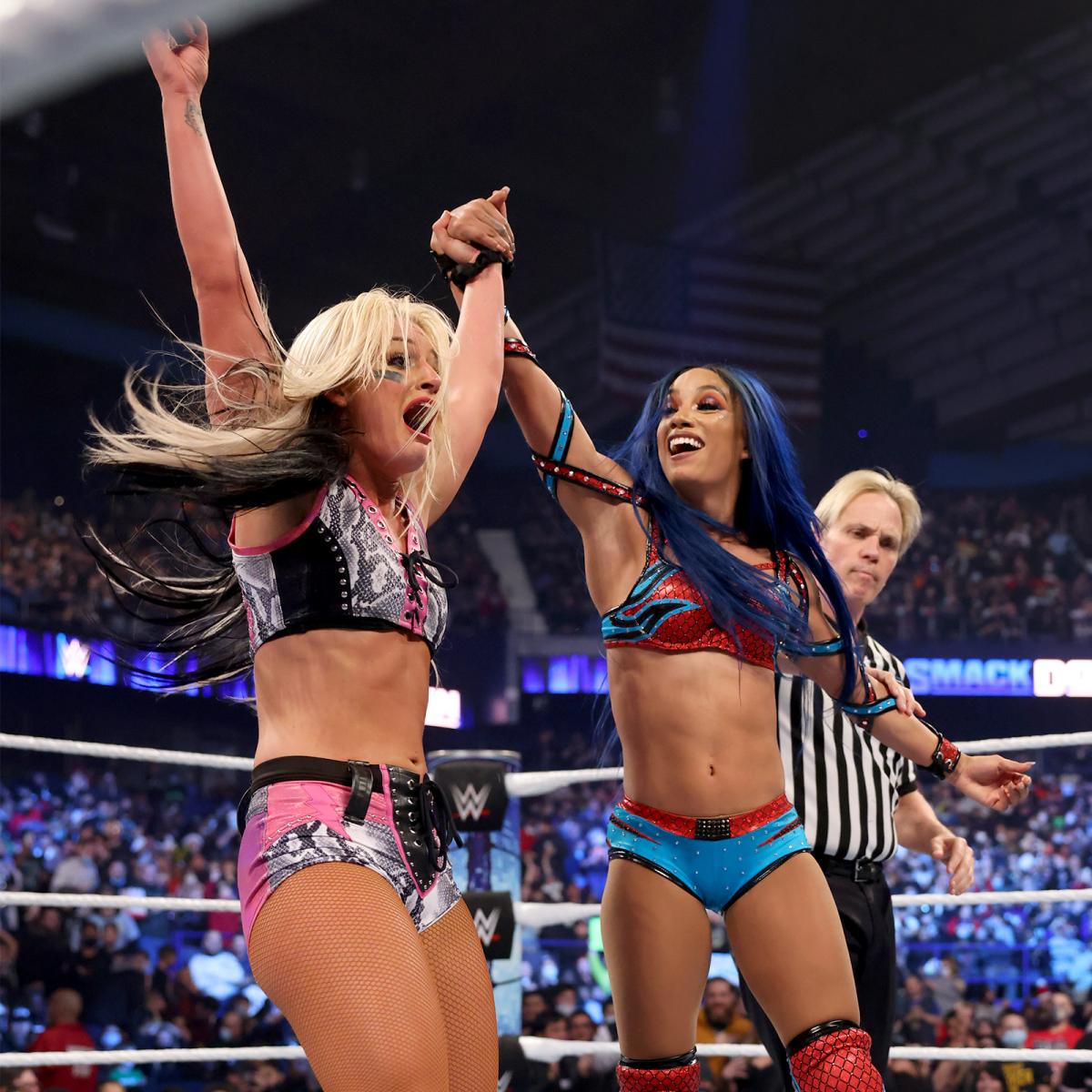 Love to see what looks like genuine excitement for a win. Photo: WWE

Backstage, King Woods is in a huge throne with a set of wrestlers lining up to kiss his ring (starting with Rick Boogs), when The Usos show up to make fun of his love of cosplay and dressing up. Woods promises them that The New Day will beat them tonight, and beat them again at the Day 1 pay-per-view. The Usos disagree.

Elsewhere, Megan Morant is with Natalya and wants to ask her about Xia Li, but Natalya shuts her down.

It would be great to see both of these teams go on a serious run. Shanky drops Erik with a sidewalk slam for an early two-count and afterwards batters Erik to the mat multiple times with ease. Mahal tags in and continues the straightforward attack with punches and kicks.
After Erik dodges a corner charge, though, he tags in Ivar who sideslams Mahal and follows with a low crossbody. He brings Mahal down with a clothesline and tags in Erik, letting his partner slam him on top of Jinder for a two-count. Shanky tags back in but he falls prey to a top-rope splash by Erik for the decisive win.

After last week’s theft of Adam Pearce’s desk, containing Drew McIntyre’s sword, Happy Corbin and Madcap Moss are rolling the desk out towards the ring to flaunt it on an episode of Happy Talk. Elsewhere, Paul Heyman giddily awaits an arriving limo, and he starts to welcome his Tribal Chief as the door opens — except Brock Lesnar steps out. Lesnar laughs and wishes Heyman luck for when Reigns does arrive.

Happy Talk brings gloating about the desk and some bad jokes from Madcap Moss, although they’re shouted out by chants of “CM Punk” in the Chicago crowd. Pat McAfee says he agrees with the crowd and he “wants love” too. Good one, Pat.

Corbin gifts the sword to Moss who tries to get it out of the desk but is unable, and neither is Corbin. They try together but it’s stuck in there. McIntyre finally makes his way down to the ring and clears them out, then pulls out his sword with ease. 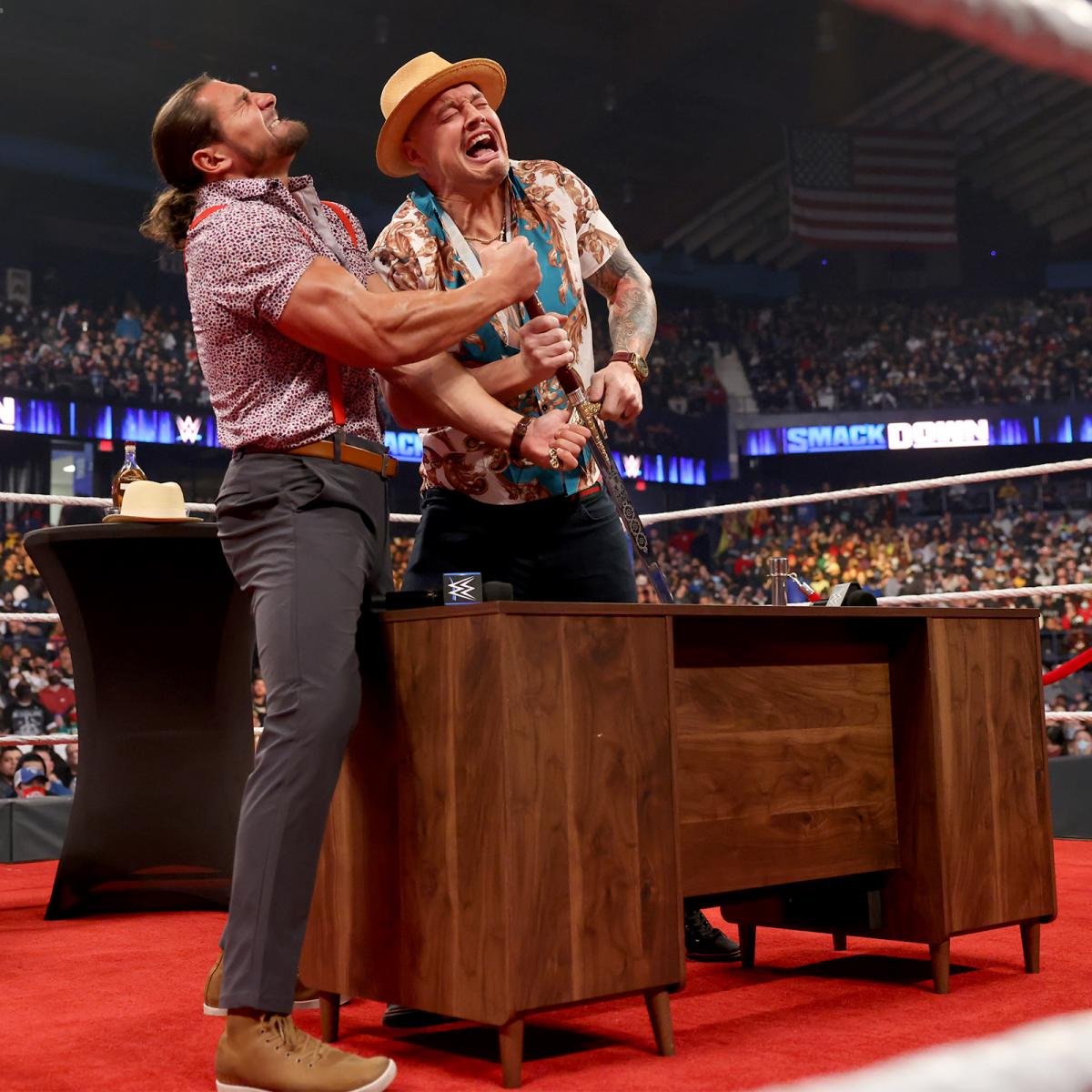 Whatever dramatic training in mime that Corbin and Moss have was in full effect tonight. Photo: WWE

Backstage, Sami Zayn is with Pearce and Sonya Deville wondering when he’s going to get a replacement Universal Championship match. The co-GMs offer him a spot in a 12-Man Gauntlet match for a shot at the Intercontinental Championship next week, which Sami happily accepts.

Before the bell, Holland runs his billy club into Cesaro’s taped ribs to take an immediate advantage. Once the match starts, Holland’s attacks focus on the ribs with an abdominal stretch and punches. Still, Cesaro’s not out of it and manages to clothesline Holland over the ropes, following him to the floor with an uppercut. As Cesaro follows Holland back into the ring he’s distracted by Sheamus, allowing Ridge to catch him with a powerslam for the win.

We’re backstage again with a happy McIntyre, brandishing both his sword and Corbin’s hat. That’s it. In the ring, Naomi is asking for a one-on-one match with Deville as an early Christmas present. Deville heads down the ring and defers, offering Naomi another opponent instead. Naomi still wants Deville, who distracts her long enough for Baszler to attack from behind.

Deville calls for the bell and the match starts. Baszler cinches in a leg lock, but Naomi manages to roll her up instead for the amazingly quick win.

Jey and Kingston kick off the match, and a very early S.O.S. by Kingston nets a nearfall. Uso knocks Kingston down with a punch, though, which allows the Usos to tag in and out, keeping Kingston down and far from his corner. A superkick from Kingston knocks Jimmy down and allows Kofi to make a tag, but the ref doesn’t see it and he sends the King out again.

After the break, though, Woods gets in and clotheslines Jimmy over the top and follows with a dropkick through the ropes. He throws Jimmy back into the ring and hits a slow, leaping leg drop from the top rope for a two-count. A blind tag brings in Kingston who misses both a second S.O.S. and Trouble in Paradise, allowing Jimmy to land a superkick that apparently, according to Michael Cole, makes the sound “Bang” when delivered. 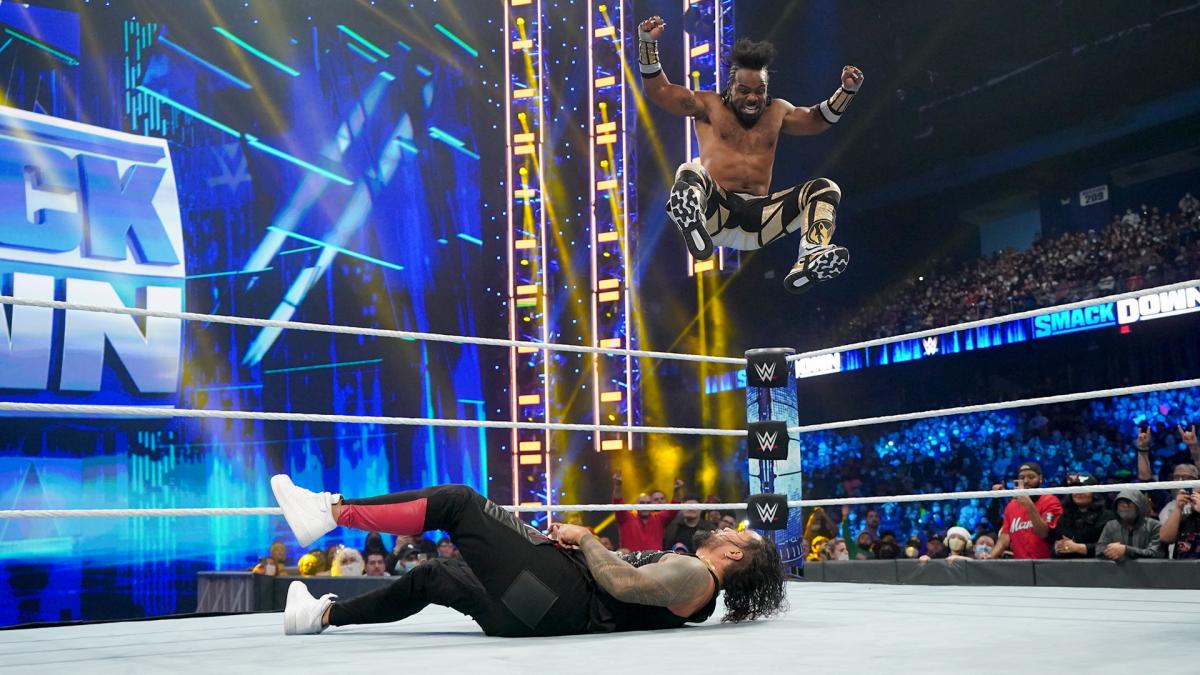 An impressive leg drop from Woods, and this wasn’t even the best camera angle for it. Photo: WWE

Jey tags in, but the ref missed that one too. As Jimmy complains, Kingston’s second Trouble in Paradise succeeds and he gets the pin.

Heyman waits for his second limo of the night, and this time it does bring in Roman Reigns (who needed the week off to come up with a new t-shirt design, apparently). The Bloodline gathers in the ring, and Reigns begins by expressing his displeasure with his cousins for losing. Still, he says, they’ll get through anything because they’re family. Heyman, on the other hand, is not family.

Reigns wants to know if he can trust Heyman, and asks yet again if he knew that Brock was going to return at SummerSlam, and if he knew about several other highlights of Lesnar’s activities lately. He finishes by asking if he’s a Special Counsel, or if he’s an Advocate.

Heyman struggles to form his answer, but he finally explains that he’s been trying to protect Reigns from Lesnar, an answer that steams the champ right up. Reigns gives Heyman a hug like it’s the ending of The Godfather, Part II before firing him with a Superman Punch.

Not satisfied, Reigns grabs a couple of chairs and sets Heyman up for a Con-Chair-To, but Lesnar’s music stops him in his tracks. The overall-clad saviour slowly marches down the entranceway, and though the Usos try to attack him, a couple of F5s bring that to a quick end.

Lesnar gets right up to Reigns and delivers two F5 to the champ to close out the show.\

While improving on recent basement-quality shows isn’t a major accomplishment, it is nonetheless heartening to see better writing and action in the ring. Maybe the new year will bring about a fresh start for SmackDown.