Too much tag action leads to Rampage dissatisfaction 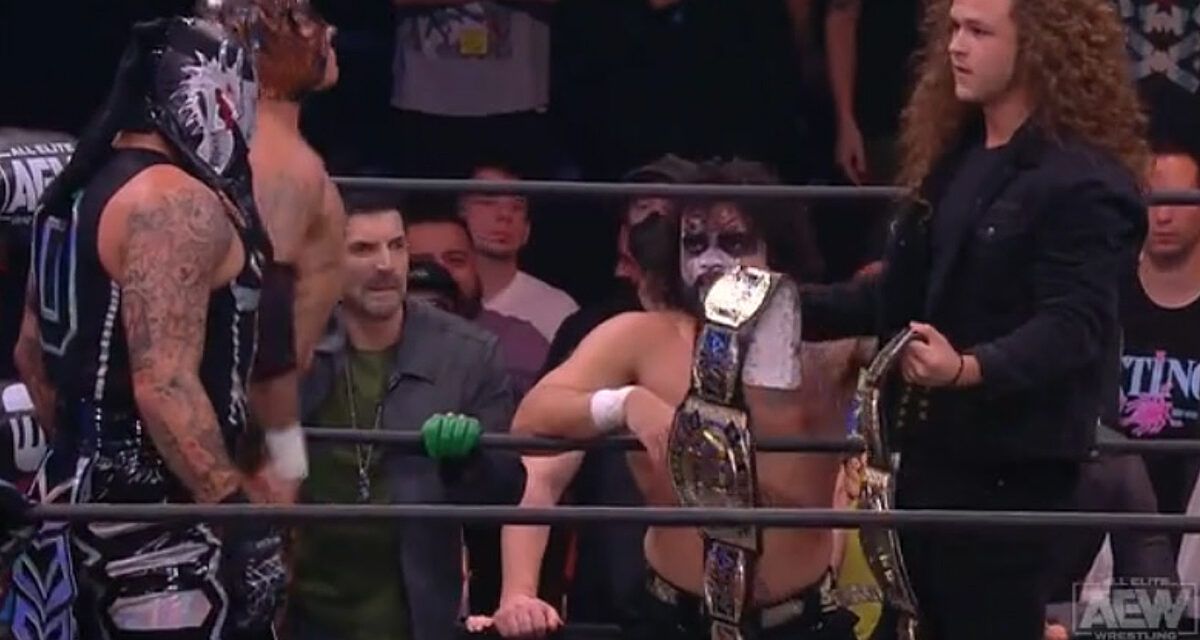 Rampage this week is stacked full of tag team matches.

I hate when AEW does this.

I hate when NJPW does this.

I would hate it too if WWE did it but they hate tag team wrestling. They really, really hate it.

Don’t get me wrong. I love tag team wrestling. Some of my favourite matches of all-time were tag team matches. Feuds like The Hart Foundation versus The British Bulldogs. The Hardy Boys versus Edge and Christian. The Gangstas versus Public Enemy. The list could go on and on.

It is just filling a card with that many tag team matches is a little repetitive to watch as a viewer and a fan. It is so incredibly hard to report on as a sports journalist with all that action, all that back and forth going on.

So, don’t expect a blow-by-blow recap with this week’s tag matches because you ain’t getting one and you don’t want one. You really, really don’t.

In the main event, Daniel Garcia and 2point0 have convinced The Acclaimed to team with them against Eddie Kingston, The Lucha Bros and Santana, Ortiz. AEW has found something special in The Acclaimed. They really have grown since joining the company and best of all, they back up all of their jibber-jabber in the ring.

Yes, AEW needs more of The Acclaimed. I just hope they don’t get lost in AEW’s fantastic but crowded tag team division.

Caster doesn’t have time to crack us up with a rap as the heels are attacked by the faces on the rampway as they make their way down to the ring. Everyone pairs off fighting on the floor. Penta and Caster make it into the ring so the official decides to ring the bell. I mean, why not? Penta and Caster throw down in the middle of the ring until Fenix teams in. The brothers kick Caster’s head off.

The “Lucha!’ chants begin as Fenix backs Caster into a corner lighting up his chest with chops. Santana and Ortiz double team Bowens taking him off his game. Ortiz chops Bowens down to the canvass posing for the crowd.

Penta slingblades both members of 2point0. Fenix tags in kicking the stuffing out of them as well. The crowd chants for Eddie as he enters the ring to take on Garcia. 2point0 pulls Kingston out of the ring so he cannot punch Garcia’s teeth out of his mouth.

The ring does clear again leaving Garcia and Kingston to battle it out. Garcia hits Kingston once. Kingston hits back with rapid fire shots. Garcia ducks a haymaker, rolls up Kingston holding his trunks for the pinfall. The heels just maul Kingston on the mat. As Kingston is held up Bowens is ready to break the boom box over his head.

Once Eddie Kingston is brained then Jurassic Express’ music hits? What’s up with that? Why’d they let Eddie get creamed like that?

Luchasaurus and Jungle Boy come from out of the audience with Christian Cage to clear the ring. Why they didn’t arrive earlier when Eddie was being set-up is not really clear.

The show takes a long, long time to end with Jurassic Express, Christian Cage and The Lucha Brothers having to stand staring at each other and awkwardly killing time as the cameras keep rolling and rolling.

Yeah, it’s a goofy music video but I cannot help but get a lump in my throat when I hear it as it speaks for how I feel about my own life, like much of their music does.

Oh, that’s Aimee Mann from ‘Til Tuesday singing and directing. Miss you always, Professor. There will never be another.

Someone should tell the Young Bucks there is a difference between walking out like heels and walking out like elderly douche bags. At least this week they aren’t dressed like guys who hang around a bocce ball court as they wait for their retirement checks to come in.

Great to see Rocky Romero on AEW television again, however, I wish he would head back to Japan and team up with Taguchi reuniting the Super Coaches.

A standing Sliced Bread from Taylor has Matt staggered. Rocky tags in taking it to Matt as well. Rocky does his forever clothesline deal on Bobby Fish. Cassidy joins in hitting one for Rocky’s 34. Cole refuses to take on Cassidy. He tags in Nick Jackson instead. Cassidy and Nick trade top walk strolls. Cassidy does his hands-in-pockets nonsense on Nick that always makes a match become dumb and dumber.

The Bucks and Cole powerbomb Trent on the ring apron. The announce team rattles on about Trent’s recent surgery and recovery. Cassidy suffers a three-way super kick from The Bucks and Cole. The heels cut off Cassidy methodically cleaning his clock. Cassidy tries to tag his way out but The Bucks pull Trent and Rocky off the apron.

Trent is tagged in. He is all fired up. He wallops every member of the heels even back dropping Cutler on the arena floor. Trent and Rocky pull some old school Roppongi Vice on the Bucks. Matt yanks Rocky off the apron though throwing him into the steel steps. Trent is pulled off the top rope. He crashes down hard on his neck.

Cassidy has to save Trent from being pinned by Fish’s Avalanche Falcon Arrow from the top rope. As everyone brawls and dives on the floor, Trent pins Fish with Strong Zero.

When we return from commercial Dan Lambert and Men of the Year are in the ring. Lambert runs down Tony Khan claiming that he has his favourites backstage, like Cody Rhodes, and they get all the opportunities and title matches.

“You mark my words,” says Lambert. “He (Khan) is turning this company into a late 1990’s version of WCW and he is becoming the very thing he hated the most about this business.”

Instead of just coming out to battle Lambert on the microphone Cody has to have his entire entrance complete with fireworks. Why? Who the hell knows? Because he’s Cody? Freaking weird. 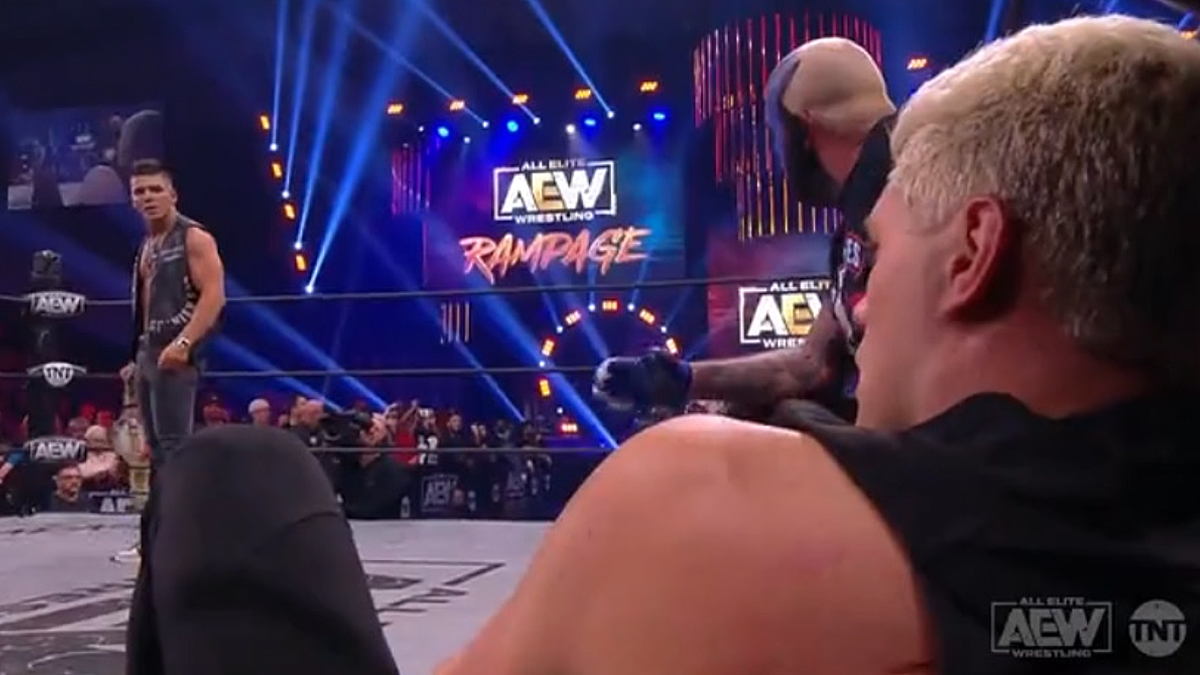 Cody and Lambert rip the microphone in and out of each other’s hands back and forth. Men of the Year finally lower the boom on Cody Rhodes. Dustin hits the ring. He glowers at Lambert before the Men of the Year beat him down too. Sammy Guevara flies in clearing the ring. Sammy gives Cody a friendly nod as he sits slumped in a corner.

A really clumsy match with both women struggling to transition cleaning through submission moves and failing. It picked up near the middle but there was no recovering from so much stilted grappling.

The Bunny helps Ford pulling her to the ropes to halt Conti’s submission move. On the floor, Ford slams awkwardly slams Conti into a steel post. Conti ducks out of the way so that Ford punches that steel post seconds later. When Ford is in trouble again, The Bunny leaps up on the apron to distract the official. Ford puts Conti over her knee in a standing neck lock. Conti catches Ford in the air, drags Ford to the mat for the submission victory. The Bunny nails Conti with those brass knuckles knocking her out. Anna Jay is too late to make the save with steel chair in hand. Not sure why as she was standing right there at ringside.

AEW announces that there will be women’s and men’s Owen Hart Foundation Cup Tournaments with the finals for both being held at Double or Nothing.

On Dynamite next week it is:

Rampage will air at 9:00 pm on Christmas Day.

On it you will see:

At Battle of the Belts on January 8th, Dr. Britt Baker D.M.D will defend the AEW Women’s World Championship against Riho.

There’s no getting around it. The tag matches were too much of the same thing and the women’s match was just a lumbering mess. Putting Ford and Conti in a submission match where they have to pivot smartly and cleanly through submission holds was a big mistake. This was a forgettable episode where everything just blended in with everything else.