Behind the Gimmick Table: Steve the ESL Teacher’s journey continues 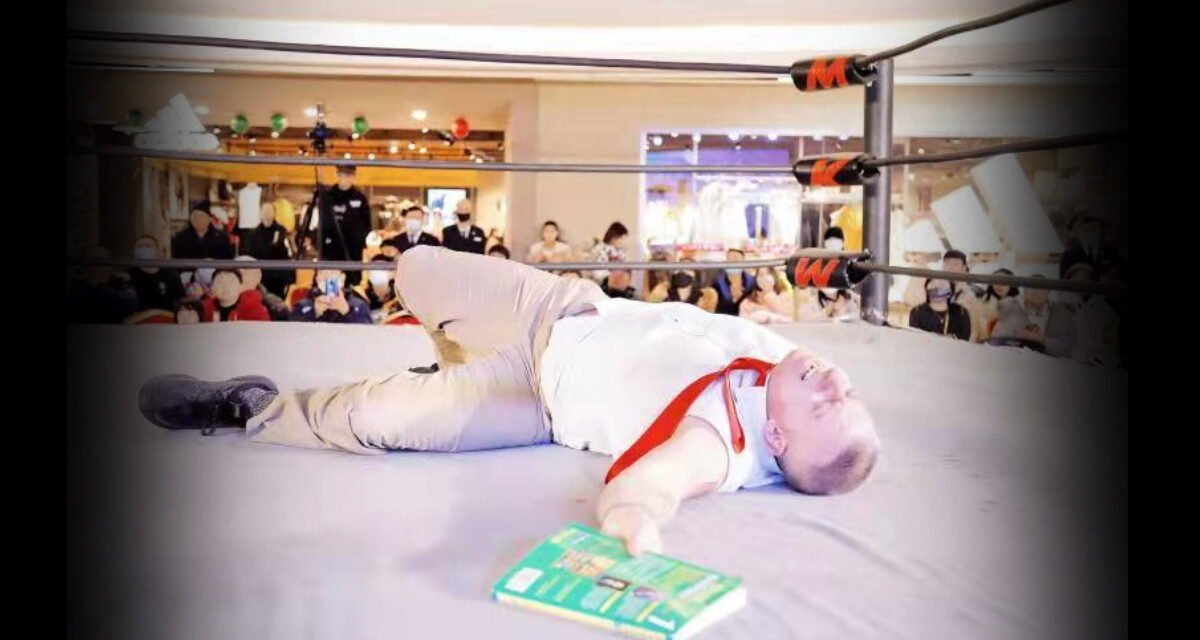 Thanks to his shoot profession as an educator, Steven Hershkowitz has accumulated an above average indy resume, despite getting into pro wrestling later in life.

Growing up in New York, Hershkowitz did not know many pro wrestling fans and the ones that did “were not as into it,” so he kept his fandom a secret — and as for his action figure league, featuring Mego’s Evel Knievel and Spock as its top stars? Double secret.

But the two worlds of teaching and wrestling would eventually collide in a big way.

After years working as a high school teacher in New Jersey, Hershkowitz saw an advertisement for Combat Zone Wrestling’s nearby dojo, and he decided to try his hand at his lifelong dream. He was 34 years old.

Under trainer and then CZW owner John Zandig, Hershkowitz was nicknamed “Teach” during training. The nickname translated well to the ring when Hershkowitz got the opportunity.

Hershkowitz said his initial ideas for characters were rejected. “Most of them were Jewish characters and he said, ‘No, no, no, we don’t go there,’” he recalled to SlamWrestling.net

Instead, Hershkowitz debuted as Steve the Teacher in CZW. After a quick elimination from his debut battle royal because “Zandig didn’t like my punches,” Hershkowitz soon found himself booked every weekend in the region. 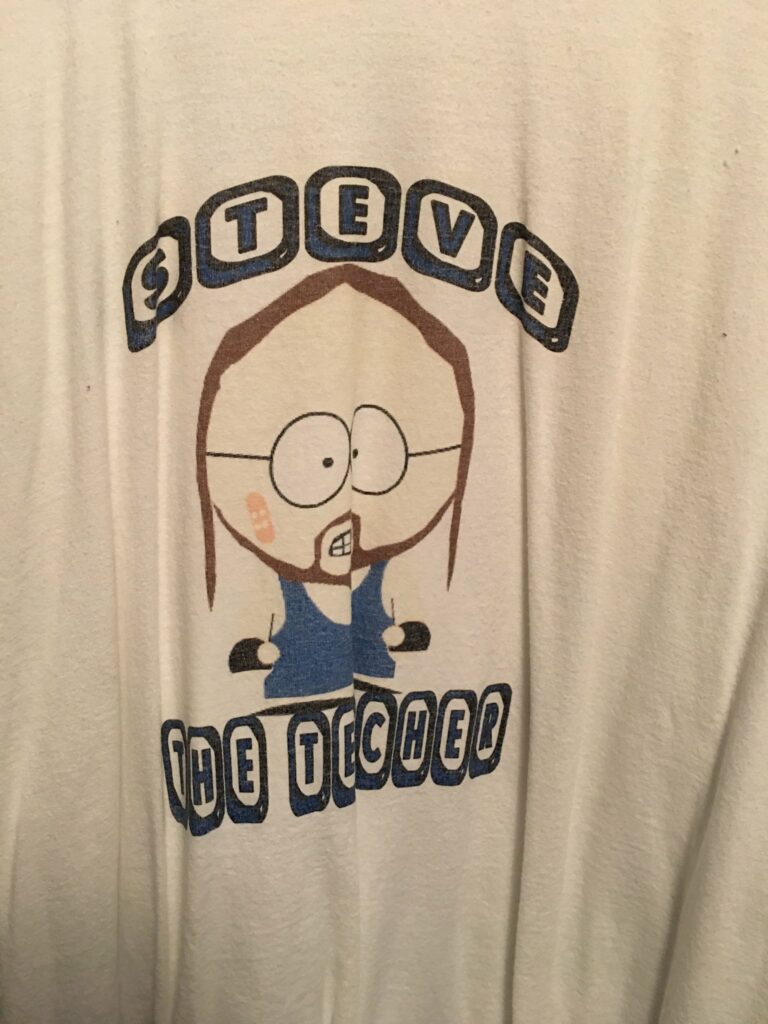 Merchandise translated to the gimmick easily. Hershkowitz quickly capitalized on the obvious 8x10s, and t-shirts. Steve the Teacher kept things interesting by tapping into trends of the day, including a South Park rendition of himself, and, thinking outside the box, items tied directly to his gimmick such as branded rulers.

It was a short run for Steve the Teacher, at least in the Northeast. His day job was frustrating too. “Frustration for the American teaching system” was part of the reason, he said, adding that “Camden, New Jersey, was very corrupt and they were trying to run out all of the old teachers. They changed the evaluation system and I was on a sabbatical when they did change it, so I missed the training for it. So I was put in a position where I couldn’t succeed.”

Again, thinking outside the box, Hershkowitz saw that there were plenty of opportunities for English as a Second Language (ESL) teachers in China, as the country had prioritized cultivating a more international presence. He up and moved.

What he did not expect to find there was wrestling — or a renewal of his wrestling career.

Middle Kingdom Wrestling (MKW) promoter Adrian Gomez, having checked out Hershkowitz’s resume and references, decided to give the teacher a chance.

Hershkowitz adapted his gimmick to his new home, and rebranded himself as Steve the ESL Teacher.

“It’s something they can relate to in terms of the foreigner coming in and telling them they don’t know what they’re doing,” he said. “But a lot of it is just old school wrestling techniques that some of these young kids just don’t know.” 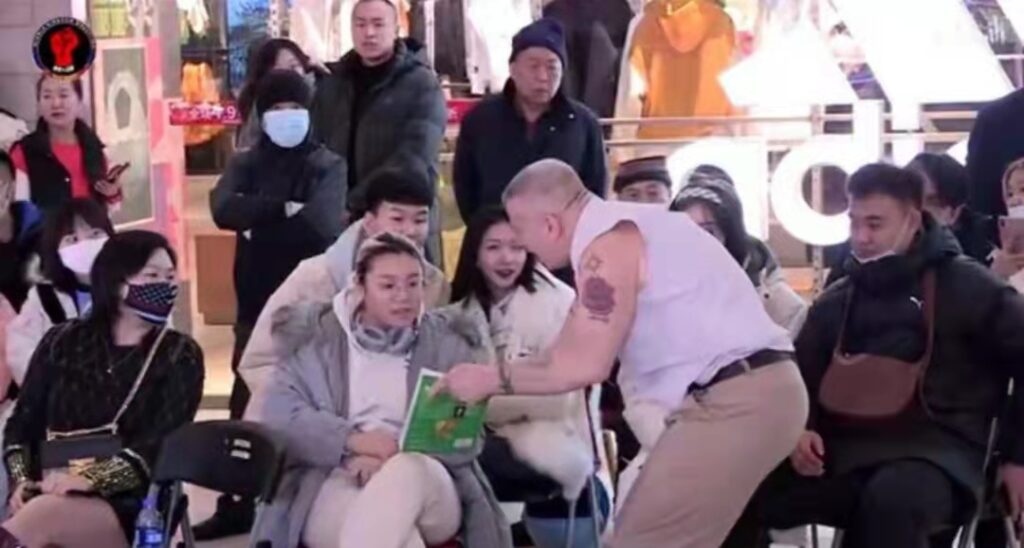 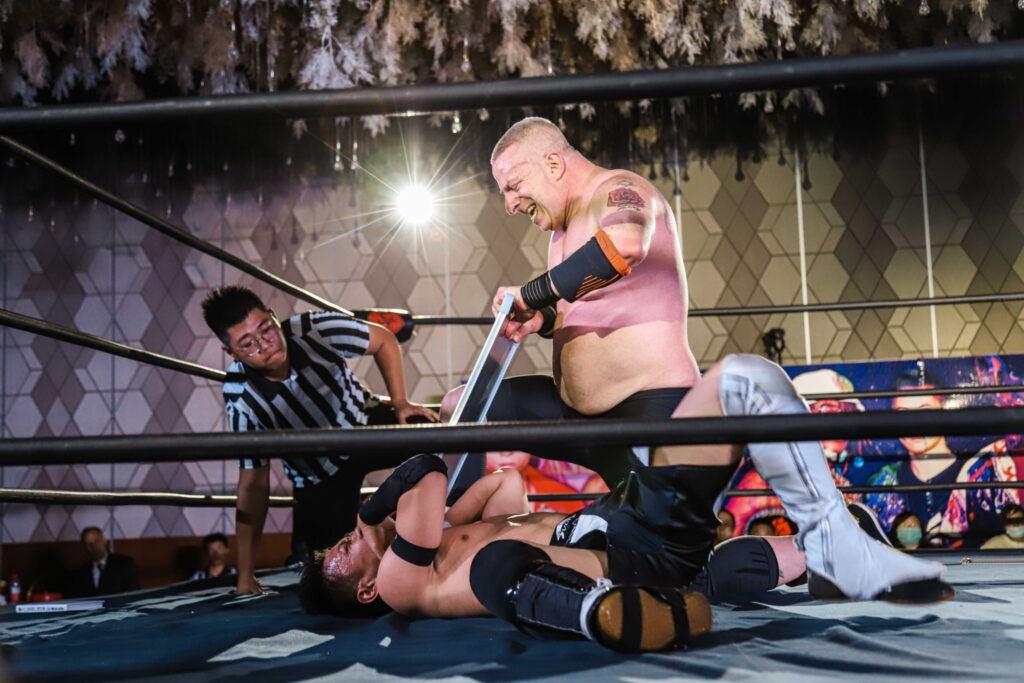 Steve the ESL Teacher chokes his former pupil Wang Tao with a chair.

The unexpected success of the villain at the time of the seasons recent tapings meant no merch. But interest in Steve the ESL Teacher has prompted MKW to get a documentary in the works on his feud that recently concluded between him and his “pupil” Wang Tao.

Realities, of age and pandemics, however can be tough. “Between the COVID and the treatment of foreigners lately it’s not fun anymore,” confessed Hershkowitz, who figures his second wind is ebbing.

Having married a Filipino woman  four years ago, Hershkowitz’s plan is to move with her back to her homeland to meet her family. But despite being double vaccinated, due to COVID-19 restrictions he will be unable to travel there right away. He is giving up his job in the beautiful beach city of Dalian to begin the new adventure as soon as possible.

“I call it my ‘bookmark.’ I will be heading to Cambodia to hide, that’s how bad I want to leave China,” he said.

But considering his “cavalier” attitude towards things, he looks forward to the detour. “I’ve never really been truly sick or badly hurt, so I’ve always kind of felt maybe I have a little more immunity than other people.” Thus Cambodia seems promising: “I hear there aren’t really any restrictions… You can get the 90-day visa online and renew it as many times as you wish. It’s a corrupt country but it’s a good kind of corrupt for foreigners, just give ’em a couple of bucks and your visa’s been extended, you can do this, you can do that.”

As far as any future in pro wrestling, Hershkowitz says although he made his goodbyes to the boys online, he wants to retire on his own terms and is exploring wrestling options throughout southeast Asia.

“I just want to thank Adrian for taking the chance on an over-the-hill never-was and giving me the opportunity to pursue my dream and hope we can take it as far as we can go in the future together,” Hershkowitz concluded.

TOP PHOTO: Steve the ESL Teacher laid out in the ring.

Teaching, wrestling come together in China in book form