PHILADELPHIA – Running a prosperous business is never easy. Running a prosperous wrestling promotion is almost insurmountable. With no shortage of financial hurdles, government regulations and rivals plotting against you from the shadows, making it in the squared circle business can be more of a sojourn in survival than success.

Recently, New Jersey based Combat Zone Wrestling (CZW) celebrated their fifth anniversary, a significant landmark for a promotion that is standing tall amid the graveyard of fallen professional wrestling would-haves.

“In the wrestling business, it is a huge achievement,” reflected John Zandig, owner of CZW, in a pre-anniversary interview with SLAM! Wrestling in Philadelphia. “Most promotions don’t make it past one year. Over five years, we’ve made a lot of accomplishments; we’ve done a whole lot more than the average promotion.”

For Zandig, the journey for CZW started with a vision of creating a promotion that would push the boundaries of the accepted standard professional wrestling product. It manifested itself into the promotions’ doctrine of ultra violent entertainment. As Zandig himself pointed out, pundits were quick to launch comparisons of CZW to another innovative promotion that was shattering conservative concepts of wrestling at that time, called Extreme Championship Wrestling (ECW).

“I’ve heard of us referred to as the bastard step-child of ECW,” said Zandig, admitting that he was familiar with ECW, having both attended and watched their shows. “I knew who ECW was, but I didn’t really follow it. I would come up with these things and everybody would go ‘Paul E (Paul Heyman) already did that.’ I was like, Jesus, this guy has done everything. I think me and Paul think alike. I didn’t build this because of ECW, I didn’t build this to be a step-child of ECW.” 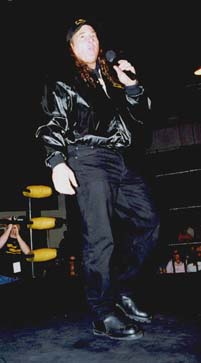 The humble beginnings of CZW began in 1998 with Zandig’s take charge attitude towards his own career as a wrestler. Only after attending an unnamed wrestling school did he come to a harsh realization of his own in-ring abilities. “I did some indy stuff, watched the tapes afterwards and said ‘Oh my God, I don’t know anything.’ So I decided to get my own ring, my own building, and I’m going to start training myself more.”

The New Jersey based facility soon manifested itself into a wrestling school. It was from here that CZW began to present wrestling shows to the public. “The guys coming in, little by little, were overwhelming the talent they had and we did some free shows. The response from the people was they wanted more. I then decided to go from a school to a promotion,” Zandig said.

The promotion would remain in its birthplace up until the year 2000, when Zandig was forced to seek out an alternative home base to produce shows. That location would end being nearby Philadelphia.

But any fears of competing against the already entrenched ECW would soon evaporate for Zandig and company as ECW would soon close up shop in early 2001.

“I’ll be honest, I think a lot of the ECW fans felt like they got smacked in the face,” said Zandig. “They (ECW) went national, they stopped coming to Philly as much as they did, they toned down what they were and I feel a lot of the fans just got disgusted with that. It wasn’t intentional, I’m sure Paul was doing what he thought was best for the company.”

So, amid the wave of change that was washing through the Philadelphia wrestling scene, did CZW find itself on the receiving end of a mass exodus of ECW refugees?

“When ECW was done, they (ECW fans) were done with wrestling, because they supported them for so long. When they went out of business and left them in the cold, they didn’t want to go through supporting another company. Did we get some of them? Yeah, we did get some of them, but not as many as I would have liked to,” Zandig said.

But what Zandig did get which has proven crucial to the hardcore following of his promotion by Philly fans, was an invitation to run shows at the famed Viking Hall, otherwise known as the ECW Arena.

It was a move that Zandig was cautious to make.

“When ECW still ran in here, we were offered to run in this building,” Zandig recalled. “But I said, ‘This is ECW’s home, I don’t want to do that.’ I said when it’s time to go to the arena, it’s time to go the arena. I’ll know when.”

Eventually CZW, with a home grown roster, would assume the role of being the new wrestling tenant of the building. It proved to be the right fit as the promotion racked up high attendance numbers for its shows.

But what initially appeared to be a new and lucrative market for CZW would prove to have its own hurdles that would force the promotion to test its resolve in making it in the City of Brotherly Love.

Making the promotion susceptible to opposing forces was its own brand of hardcore wrestling. Premiere events like the annual Cage of Death, along with any other shows where tables, light tubes, barb-wire and yes, even a weed-wacker were utilized, only provided ammunition to those who wanted to see CZW fail.

“What we do is controlled chaos,” Zandig said, explaining that delivering his product comes with the approval of the athletic commission in Pennsylvania.

“You talk to the athletic commission, you tell them what you’re going to do. There’s a way of doing things; wrestling is the entertainment business. You need to tell them who’s going to be here, who’s in charge, they need to know. We do have to give them an idea of what we’re going to do.”

Of the varied aggressors that CZW faced, the one that stands out the most was the now-defunct California based Xtreme Professional Wrestling (XPW) promotion. Debuting in Philadelphia in the summer of 2002, the group, for a brief time, was successful in driving Zandig’s company out of Viking Hall.

“They came in here and I guess they decided to run us out and be the big shots,” said Zandig, telling of how the rival wrestling company, in his opinion, blatantly disregarded the proper and safe manner if which to run a show. The end result was a face-to-face meeting with the state athletic commission where new rules were implemented, which severely curtailed the type of hardcore spots that could be presented.

“It was never CZW’s fault, but in the eyes of a lot of people here in Pennsylvania, they probably think it was our fault,” he said.

Only adding to Zandig’s list of annoyances committed by XPW, was the promotion’s attempt to acquire talent from CZW.

“They tried to get several guys,” Zandig said, admitting his rival was successful in recruiting some members of his roster, including one of the promotion’s top names, Justice Pain. “One guy doesn’t make CZW. It’s everybody together that makes CZW.”

But persevere CZW did, and with XPW fleeing the market and eventually collapsing, Zandig and his roster would make their triumphant return to Viking Hall in early 2003. But the damage was done.

“In reality, we lost a lot of our fans. We couldn’t give them what we wanted to give them. That hurt us,” said Zandig.

In no way was CZW about to close up shop in light of the new restraints placed upon it. Zandig carried on and continued to promote his wrestling product. One particular feature of the promotion that Zandig takes great pride in is the annual Best of Best tournament, featuring the promotion’s high-flying, junior heavyweight grapplers.

“It’s basically a time for the juniors to showcase their talent. CZW has some of the best juniors in the world as far as I’m concerned,” declared Zandig.

One of those junior stand outs that took full advantage of the CZW junior environment is independent wrestling sensation Sonjay Dutt.

“It’s like any profession, you’re given an avenue, you’re given a forum. Once you’re given it, it’s up to you to do something with it,” said Dutt, making it clear that the promotion provided him the platform to build himself into the breakout talent that he has become. “Before CZW, I really had nothing. I worked indies in Virginia and North Carolina, but it wasn’t the exposure that CZW had. But when I was given the forum of CZW, I did everything in my power to run with the ball.”

But Sonjay did confide in his frustration over the way the promotion as a whole has been ignored by the wrestling media, which in turn has allowed many other talented workers in the company go unnoticed.

Those sentiments were backed up by Zandig, noting that on every CZW card, there is more than an abundance of wrestling matches, devoid of any hardcore antics. “We do those matches every month, but that’s not what you hear about,” he said.

“You hear about Zandig jumping off a building, or Mondo (Sick Nick Mondo) jumping off a truck, or somebody getting lit on fire. You don’t hear about all the great wrestling, the high flying, the technical. I think it’s time for people to open their eyes and say ‘Hey man, these guys ain’t just hardcore, look at what they’re doing.’ We do it all and more people in the world need to know that,” Zandig said.

And that is just what CZW is continuing to do. Lead by its flagship outlet “CZW Fake You TV”, broadcasted in several northeastern states, Italy, and the new wrestling channel based in the British Isles starting in March, the promotion continues to reach out to the wrestling masses.

But if you think for a second that Zandig is content with his success in survival, think again.

“I want to do four pay per views a year,” he said. “Video distribution is coming soon. We’re working on our first six DVD releases. We’ll be out in the stores nationally. A Combat Zone Wrestling video game; we’re negotiating that. We just signed a contract with France, which will be Quebec, France, Belgium and, I think, Switzerland.”

Making what CZW has and will achieve is the die-hard roster that Zandig confesses is always striving to set new precedents of in-ring mayhem.

“My guys, I don’t have to ask them anything,” Zandig said, noting that in some instances, he must restrain some wrestlers from taking unnecessary risks.

“My guys will come to me and say ‘John, I want to take a big bump.’ There are certain guys who get over certain ways. Some guys will come up and they want to do this big bump, and I’ll say you don’t need to. But every now and then, you give it to them. The bar is so freakin’ high, it’s scary sometimes.”

To find out more about CZW, visit their website: www.czwwrestling.com.