Valentino sets his sights on WWE

Valentino is known to the Indy circuit fans as a smart-mouth heel who has been wreaking havoc in Great Lakes Championship Wrestling, in Brantford, Ontario.

He claims that he’s a star from Beverly Hills, California, but the truth is that he’s a nice guy from Chatham, New Brunswick. He currently resides in Hamilton, Ontario and is setting his sights on taking over the WWE. 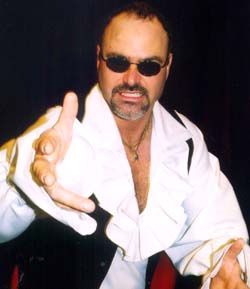 Valentino was born David Barry and was always into physical contact sports. He trained in kick boxing and started at 19. He had 13 amateur fights and four pro fights.

He gave up the sport because of it’s emotional turmoil. He didn’t like having to go out there with true hate in his heart.

“In wrestling the boys are all close knit in the back and we’re all friends,” he said. “In a sport like boxing you have to develop a real hatred for your opponent. I just thought this isn’t fun anymore.”

After he decided it was time to get out of kick boxing he turned to a childhood love. Wrestling.

“(Wrestling) is every bit as physical as kick boxing, if not more so.”

After eight months of training he had his first match in Hamilton at the Leander Boat Club. It was against an upstart by the name of Jerry Martell. Eventhough the first match didn’t turn out so well, the two became a tag team called the East West Connection 2K1.

When he moved on to the Hamilton-based EWF, Quinson Valentino was born. Promoter Bob Woods asked Valentino to go out to the ring and put on a show with a persona that wasn’t as edgy as what Valentino had in mind. Valentino didn’t agree with Woods so he went out there and threw together his own idea that turned out to be Quinson Valentino and a success.

Valentino dismissed Bob woods’ ideas. “Everything he ever told me was wrong. Everything that Tom Pritchard or others told me was the complete opposite (of Woods).”

He grew up watching the likes of Jesse Ventura, Ric Flair, Bruiser Brody, Rick Rude and Randy Savage. He also incorporates his favourites into his own gimmick.

“I have the upper class snobbyness of Jesse and Flair and the seriousness of Savage and Brody.”

He also uses a neck breaker as his finisher which is modified from Rick Rude’s neck breaker.

Valentino met up with Pat Murphy (Scott Chase) and began running GLCW matches with him. He stopped after a few months but continues to work for the company. He said he has a firm belief that wrestlers who put themselves behind the scenes are asking for criticism of how they write their own storylines.

Since GLCW shows don’t run regularly, he keeps himself busy at a full-time job, plus working for wrestling promotions such as CWF in North Carolina, AWWL in Michigan, WWA New England and NWA East.

“I really like GLCW,” he said. “I’m not just saying that to promote the show. I really like the way they write. They understand that most of the fans are watching for the first time and are aware that they might not be knowledgeable of the product. Other Independent shows forget that sometimes.”

During his short visit to the WWE Quinson got to rub noses with a few of his favs and keep his name in the air.

“They had all the (independent) wrestlers in a room and said hang your stuff up and go get something to eat,” he said. “I hung my stuff up and went to the side with the catering and came back. When I got back Shawn Michaels was on my left, Ric Flair was on my right and Arn Anderson was across from Ric. I thought I was in the wrong place so I apologized and got my stuff but Shawn was like no, no, we all just hang out together and Ric Flair said to sit down beside him. I was blown away. I told him, look I’ve watched you my whole life and you know, he was cool with it.”

Valentino also made an impression with Hurricane Shane Helms and is keeping in contact with Pritchard. If he has his way he promises it won’t be long before we see yet another great Canadian heel in the WWE. Until then Valentino will continue to show-boat in GLCW.

On March 13th the champ is set to tag up with “The Real Deal” Magnus and “As Seen On TV” Notorious T.I.D. to face Scott Chase, JQ Publik and none other than former WWE superstar, Tony Atlas.

“Anytime you can get a noted name into a small promotion it’s great,” he said. “It should be a great show.”

As for the rumours about good guy Canadian and Brantford’s hometown boy, Scott Chase, getting another shot at Valentino’s belt, the arrogant champ had this to say,

“He’s kind of bush league, way below my level. He’s barely qualified to carry my bags!”