MONTREAL – Under new management, the Championship Wrestling Association presented their second wrestling card since the takeover and delivered a lot of action, and a new champion.

The CWA had gathered many of the most popular wrestlers from Quebec’s indy scene for a show Saturday at Bogey’s World, which set the scene to determine their first ever heavyweight champion. 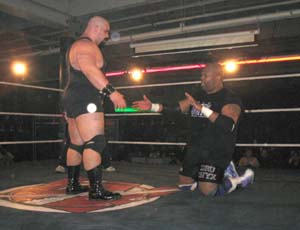 Dru Onyx cowers from Tank in the main event. — photo by Yves Leroux

President Steve Charette wants to take a slow approach to the re-organization, so not to repeat previous mistakes. He is banking heavily on many of the province’s bigger and bulkier wrestlers as he feels they are the main attraction: “Even though wrestling fans like high flyers, the heavyweights are the ones most like to see,” said Charette. “We certainly believe there’s room for the lighter wrestlers and we will bring them up as we feel they can attract a following”

Starting up the card was a triple threat match featuring Sexxxy Eddy with valet Moonlight vs. Nick Blade vs Shayne Simmons. After many kicks and slaps, Sexxxy Eddy won the match.

That was followed with MVP Michael Van Paton with valet Misty Havens against Sweet Pete with valet Sweet Cherry. MVP worked the crowd into a screaming match and had them riled up, a tactic that seemed to help him win by submission.

One of the highlights of the night was a match featuring TNT versus one of the Twin Towers, with their manager Professor Adib Mansoor who worked the crowd into a frenzy not seen since the old days of Eddy “The Brain” Creatchman. He was the evil Arab manager with protégés that were identical twins. Although it was one of the twins that started the match, they kept switching as the manager kept the referee busy with his complaints. Although one of the twins got a three count, the referee reversed the decision and told the wrestlers to continue the match with TNT winning in the end. A very entertaining match indeed.

What followed was a great rumble to determine the two finalists for a later match to determine the new CWA champion. In order of appearance were: Jagged, Shane Matthews, Jake “Paranoid” Matthews, Drake Styles, female sensation Lufisto, Tank, Damian Styles, Dru Onyx and Manuel Vegas. An excellent rumble which featured many surprising moves such as Tank eliminating both Styles brothers with a double clothesline, Sunny War Cloud, who wasn’t even part of the match, attacking Jake “Paranoid” Matthews with a shovel, revenge from a previous show, and Lufisto talking incredible bumps from the much bigger wrestlers. Tank and Dru Onyx ended up as the last two combatants so the scene was set for a later match for the heavyweight championship. Dru Onyx then asked his tag team partner Tank to just forfeit the belt and give him the match right away. Of course Tank refused.

After a short intermission, LuFisto was up in the ring, as a secret admirer had sent her a poem asking her to meet. It turned out to be a student from her wrestling school, Superstar Shayne Hawk, who believed he was ready for the action and proved it by giving LuFisto a sweet chin kick that everyone heard around Bogey’s World. She was helped of the ring with great difficulty.

Of course, what would a wrestling card be in Quebec without the obligatory veteran’s match and what a match that was. It featured the famed Sunny War Cloud against Mad Dog. Almost right off the start, there was interference by Trey Hugh Mongus, a massive 300-plus wrestler who came to help Mad Dog only to see Brick Crawford coming out to help his buddy Sunny. The ref then decided to turn the match into a tag team match. There were lots of heavy slaps, turnbuckle being tested for strength and lots of leg drops from all the big wrestlers in the ring. Sunny took the win for his team.

That was followed by Guil Reno taking on Chackal. Another good match although quite short with Chackal getting the win and taking the occasion to challenge the winner, and of course the new champion, for the next card. MVP, Michael Von Paton, then showed up and challenged Chackal by telling him he’ll have to go through him before getting a shot at the champion, with Chackal happy to accept the challenge.

The final match of the evening had Dru Onyx against Tank for the first ever CWA heavyweight belt. This was a long match that culminated with Onyx throwing Tank into a table set up against the turnbuckle. Onyx then got the three count to become the new champion. A video had been prepared to celebrate the champion with all the wrestlers coming out of the dressing room but was interrupted by an overlapped video of Chase Ironside challenging Dru Onyx for a championship match on the March 27th card.

With the usual hardcore fans and many signs in the crowd it was easy to see the new strategy seemed to be working well for the CWA. There was even a hardcore fan, John Kerr, who got dressed as a masked wrestler, right down to the black speedo and wrestling boots who kept many fans laughing with his humorous signs throughout the evening.

A little side note: Damian Styles tore his right bicep as he was eliminated from the rumble and will be out of action for an undetermined amount of time on the Quebec indy scene. At this time, there is no news as to what his brother Drake will do.

According to Steve Charette, having a wrestling card once a month will give them proper time to arrange things. “We think it will give us plenty of time to set up a good card all the while keeping the previous card fresh in the fans memory,” he said. “This recipe worked very well in the days of Grand Prix and International Wrestling, and there is no doubt it will work again.”