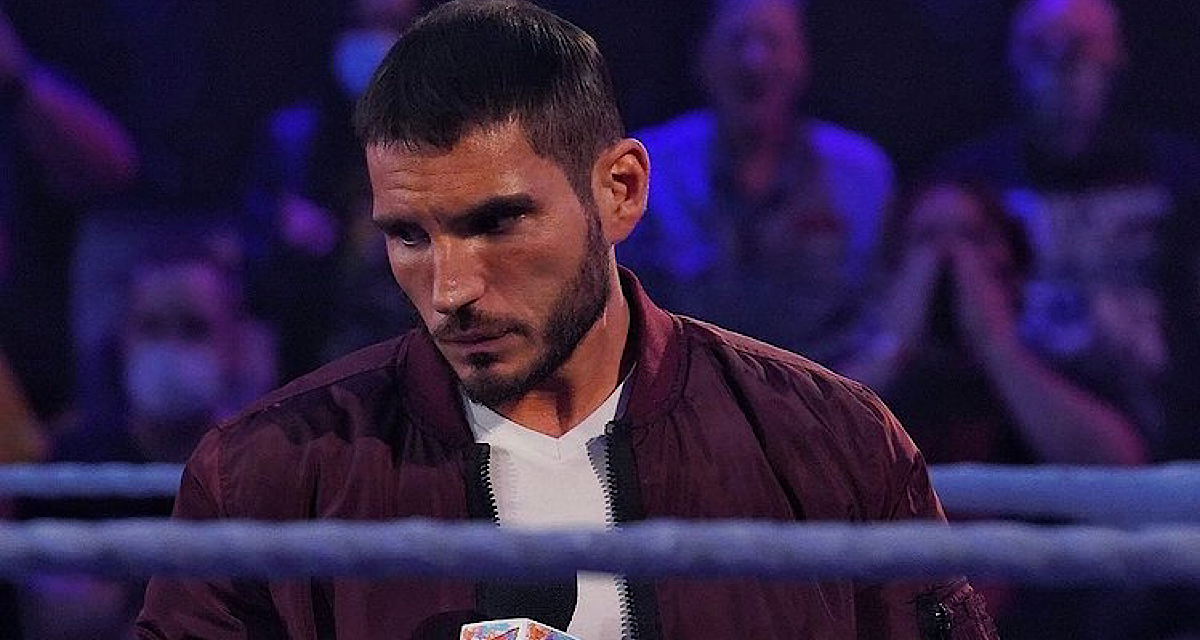 Although still speculative, two NXT cornerstones in Johnny Gargano and Kyle O’Reilly received their respective sendoffs during tonight’s post-WarGames episode. Contractual rumors tipped off their departures, but one farewell was more apparent than the other: Gargano headlined with a heartfelt, retrospective promo on his unforgettable six-year run as NXT’s “heart and soul.” Conversely, O’Reilly’s goodbye was rather soulless.

The mismatch tag team of O’Reilly and Wagner has split; but Wagner is getting that rub one way or another. So, in likely O’Reilly’s final NXT match, Wagner dominates in a plodding show of offense throughout picture-in-picture and stifles the proceeding comeback attempt. Wagner kicks out of O’Reilly’s finishing knee drop, delivers a low blow, and slams his opponent for the three-count. He isn’t finished yet, repeatedly slamming the cage door into O’Reilly’s face. Thanks for coming, O’Reilly!

Joe Gacy, backed by Harland, hints that he’s rebranding 205 Live into something more inclusive. And, next week, Harland officially makes his in-ring debut. The vignette is dark, uneasy, and simply really good; Gacy is killing it.

After pinning the NXT Champion at WarGames on Sunday, Bron Breakker calls out Tommaso Ciampa but instead receives Diamond Mine. “May I call you LeBron?” asks that hoot Malcolm Bivens. He casually announces that the Cruiserweight division is done and challenges Breakker for the Cruiserweight Champion Roderick Strong. He accepts, and next week’s matchup has some exciting potential.

The Creed Brothers vs Josh Briggs and Brooks Jensen

Grizzled Young Veterans are on commentary, the NXT Tag Team Champions Imperium are watching on nearby, and the audience emphatically sings their entrance theme. Meanwhile, there’s a match happening. At one point, James Drake and Zack Gibson sneakily remove Briggs’ tag team rope, meaning Jensen can’t legally make the tag. But it doesn’t matter, because Jensen rolls up Brutus Creed for the victory. And like that, the Creed Brothers of Diamond Mine are undefeated no longer.

Von Wagner is interviewed backstage: “WarGames is over. Kyle is over. But my WarGames has just begun.”

After losing his hair against Cameron Grimes on Sunday, Duke Hudson dons a familiar wig and headgear combo. Grimes appears and rubs it in, ultimately accepting Hudson’s desperate offer: they’ll compete next week in a no-holds barred match.

Josh Briggs and Brooks Jensen are met backstage by Jacket Time and Grizzled Young Veterans, who have a pull-apart brawl that somehow every referee immediately sees.

In the parking lot, breakout star Grayson Waller is unknowingly chatting up LA Knight’s date for tonight. The newly turned Knight drives off, saying, “You’re all about likes and views, right? How do you like this view?”

WWE’s current music production team is pretty uninspired, so it’s worth noting Hayes’ new banger theme song. Following his hand injury, Lumis returns for revenge against Hayes and gets it. He takes majority control, but before commercial, Hayes capitalizes on Williams’ distraction and begins exploiting the hand. Lumis makes the comeback and cinches the finishing choke, but Williams’ cheapshot ends the matchup via disqualification.

Persia Pirotta and Indi Hartwell’s drama continues as Dexter Lumis returns, and Johnny Gargano makes a brief cameo for an incomplete reunion of The Way.

Here is Toxic Attraction’s contractually obligated weekly segment or two, habitually a lower point in an NXT 2.0 show; tonight’s episode was going well, too. After some scuffling, Jacy Jayne hits the finishing big boot for three. Mandy Rose grabs the microphone, calling out Cora Jade, Io Shirai, and Raquel Gonzalez. Jade, infamously “wise beyond her years” as commentary mentions again, steps up. Gonzalez with a steel chair runs Toxic Attraction off… for now.

Tony D’Angelo is interviewed backstage about his rivalry with “Petey Poppins” Pete Dunne. D’Angelo is interrupted by Andre Chase, starting beef for no good reason, but the former respectably backs off.

Quinn has an unmistakable presence, but the positives stop with his dull offense. Consequently, the room is dead heading into picture-in-picture, but Escobar finally turns the tide. Quinn’s generic big man comeback sends him and Escobar into the corner; they battle atop the ropes, and Escobar delivers an insane looking hurricanrana to the canvas. But on the outside, Elektra Lopez of LDF hands Quinn brass knuckles he instead uses on Joaquin Wilde. Off the distraction, Escobar delivers the Phantom Driver for three. This was NXT 2.0’s weakest main event yet, but the real main event is forthcoming.

In the parking lot, Diamond Mine’s promo is interrupted by Carmelo Hayes and Trick Williams. Hayes definitively claims that Roderick Strong is not the “A Champion,” to which Malcolm Bivens bursts, “Why is everybody so damn disrespectful around here?”

To a standing ovation, with tears in his eyes, Johnny Gargano enters to “Rebel Heart” one more time. With a genuine tone, Gargano reflects on six unforgettable years, thanks the audience, and commends numerous other names: “Hunter and Shawn,” Matt Bloom, Steve Corino, Terry Taylor, Sara Amato and many more. “This is my family, and that’ll never change… I know change is scary, but sometimes it needs to happen.” Gargano is unsure of his immediate future, but come February, his job of fatherhood will begin. But the audience reaction changes when somebody else appears: Grayson Waller, of all people, ruins the heartfelt farewell with a chairshot. Waller powerbombs Gargano through the announce desk as the storied lower third signals the end.

Johnny Gargano’s farewell was the most emotional and genuine segment that NXT 2.0 has produced yet. So smothering it with Grayson Waller’s punchable face was oh-so effective. Despite the great heat, Gargano and O’Reilly’s absences will undisputedly hurt the brand — and NXT’s glory years, with names like Gargano and O’Reilly, are now simply past memories.