NWA POWERRR: The British Invasion Gets Back to where they belong in tag team action 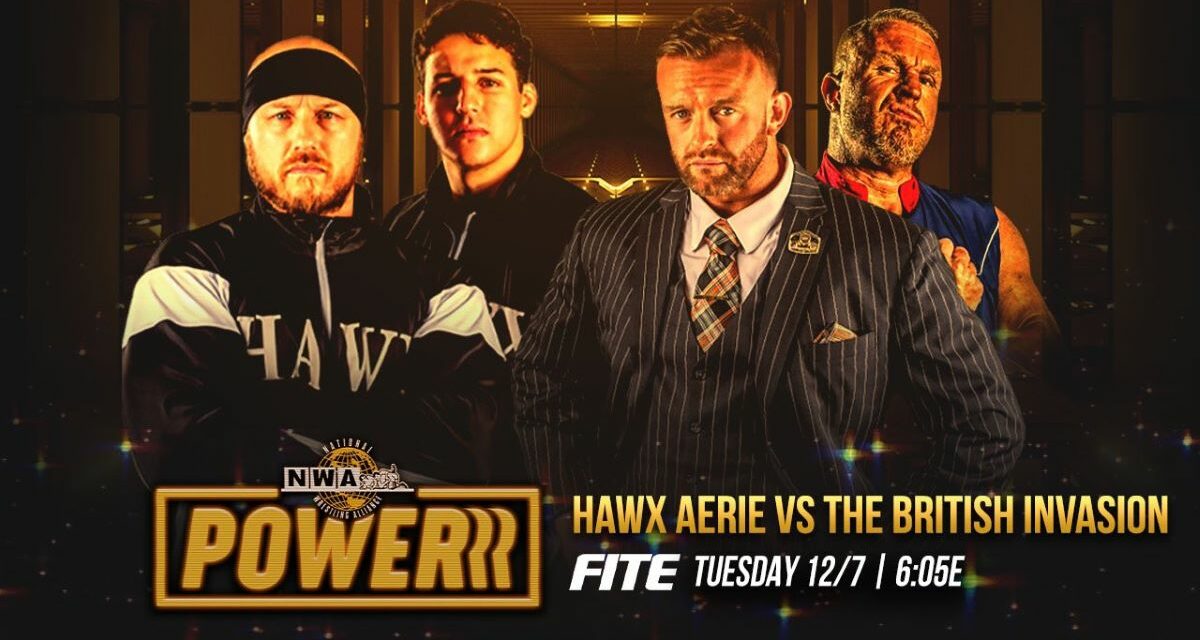 Sometimes, it is possible to get the band back together.  After three years, Nick has the opportunity to get together with his former British Invasion stablemate Doug Williams to seek tag team glory.  It’s a perfect opportunity to Get Back to where they belong in the NWA.

(Since there’s no need to step Into the Fire, let’s see how many Beatles references I can cram into this recap.)

We get to a cold open that recapped the final moments of Hard Times 2, as NWA Heavyweight champion Trevor Murdoch beat Mike Knox to retain the Ten Pounds of Gold.  But then Matt Cardona comes to congratulate, and Murdoch gets a low blow from Know, after working A Hard Day’s Night at the PPV.  What’s the end game of Cardona?

We’ll get into it as we head to the GPB Studios, with your commentators Joe Galli, Tim Storm, and Velvet Sky have the call.  They comment on the final moments of the PPV, and that Da Pope got injured as he came out to fight for Murdoch when he needed Help!

There’s more fallout from the PPV to get to, but let’s start with your First Match of the night… 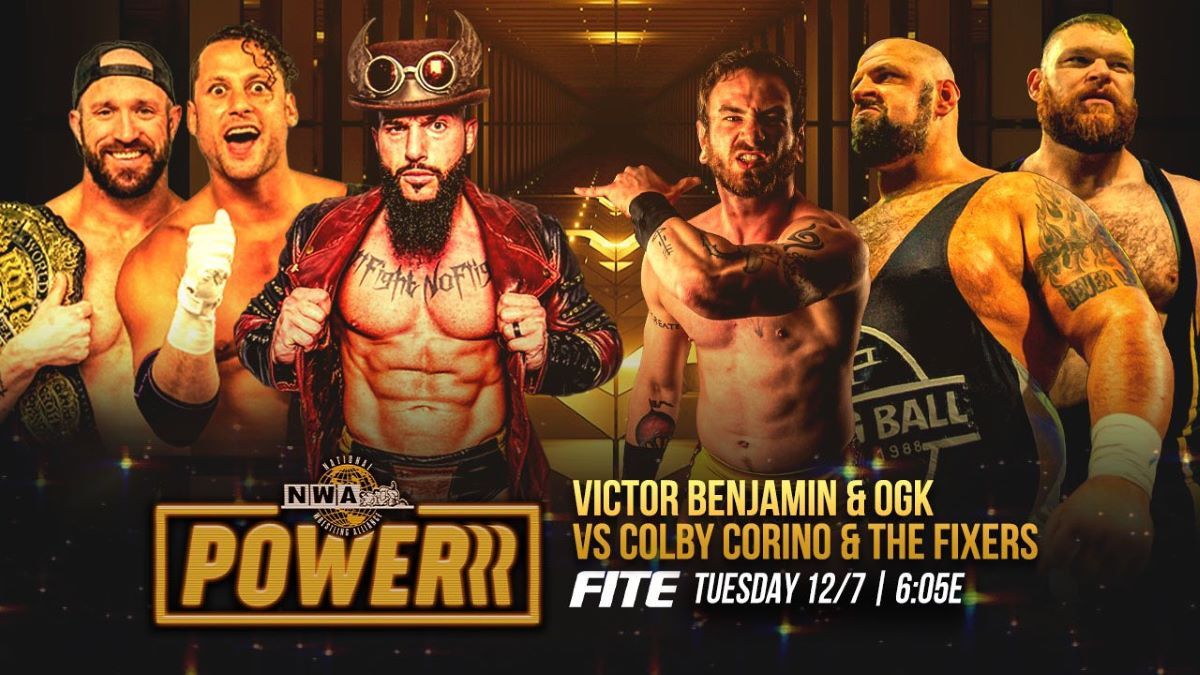 Colby Corino and The Fixers (Jay Bradley and “Wrecking Ball” Legurtsky) vs. Victor Benjamin and The OGK (Mike Bennett and Matt Taven)

Right from the start, Bradley takes Taven to the heel corner and Corino and company proceed to double and triple team Taven.  Corino is now in the ring, and Taven manages to reverse his offense and brings him to the corner, and tags in Bennett.  From there, it’s just all OGK tag team chemistry against Corino.  At one point, Legurtsky gets tagged in and goes to work on Bennett.  Once Bradley gets in the mix, you see the big man tag chemistry like it was Yesterday.  It looks like Mike is your Bennett in Peril, as Corino nails the Colby Crush to cover for a two count.  Legurtsky is tagged back in and sends Bennett to the corner.  Before he can finish with a corner splash, Bennett gets a boot up and gets the hot tag to Victor Benjamin.

The Savage Gentleman takes the fight Here, There, and Everywhere as fans chants “Savage” as he yanks Corino to his shoulder, but the Fixers interfere and gets a powerbomb/backdrop suplex combo to Benjamin, but The OGK jump in and clean house in the ring, with Taven adding the exclamation point to dive on The Fixer.  Benjamin tries to end it, but Corino gets into position and hits the Sunsetter finisher for the win

Your Winners via Pinfall:  Colby Corino and The Fixers

We head to May Valentine, who’s with Strictly Business members Chris Adonis, Kamille, and Thom Latimer. She gives congrats to Adonis and Kamille for their title defenses, but she notes Latimer didn’t do as well. Latimer remarks that Aldis was wincing at the end of the match, and he took a piece of his soul. Kamille says that Melina was fierce last night, but she is still holding The Burke. As for Adonis, he’s not afraid of the bogeyman in Judais and is a successful defender of the National belt.  He gives props to Latimer, saying he will get his just due in the end.

Now to Kyle Davis at The Podium with Jax Dane.  Dane is upset with his loss to Mims on the preshow. Dane was so upset that he went to Corgan and wanted a rematch, but was denied. So Dane mentions he offered to put up his Champion Series title match up for grabs if he lost again to Mims, and the powers that be agreed. Dane is confident he’ll win, and after listing his previous championship accolades that he wants to be treated as the legend that he is.   Dane looks like he has a Ticket to Ride that match for a win.

Galli and company wonder what Mims chances look like tonight, as they also plug for NWA USA on Jan 8th on YouTube for the NWA Junior Heavyweight tournament.   I think we should circle that date and Come Together for that show next year.

Speaking of The End, here’s your next (and I use the term loosely) match…

At this point, can you taste the squash that is being served in the ring?  Alas, poor Robles, we hardly knew ye.  Since I still do not recap squash matches, enjoy the New England Butternut Squash recipe, since I’m So Tired of squash matches like this.

For Latimer, after toying with Robles, he finishes him off finally with a Piledriver, and thanks for coming to play in the NWA, Robles.

As for your next match, I gotta admit it’s Getting Better.  A little better, since it looks like an implosion between… 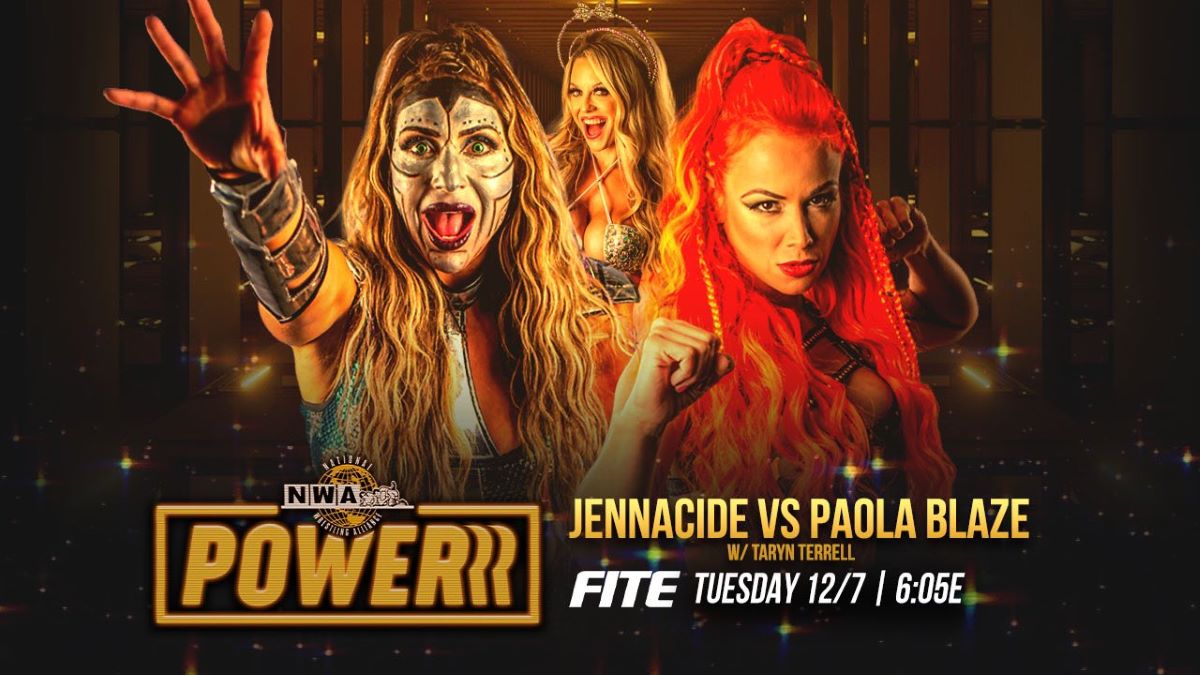 Terrell is in the ring, trying to talk Jennacide down, and asks her to Let It Be.  She tries her best to convince Jennacide that We Can Work It Out, but there’s nothing doing for the Bionic Beast.  Blaze does her best to counter Jennacide’s offense, but it’s too much Cyborg for her to handle.  Jennacide gets Blaze in a choke slam, and then Natalia Markova comes up to the apron.  Distracted, Jennacide goes to take a swipe at the ravishing Russian, who dodges her, probably to head Back in the USSR.  Blaze tries to take advantage, but…silly Paola.  Jennacide cyber slams her for the pin, and the win,

Back to May Valentine backstage with The Hex, Homicide, and La Rebelión on how they feel after their respective wins. Homicide is low-key, saying he is winning the Junior Heavyweight belt.  MechaWolf says en Español and in English they proved they are best tag team in the division.  As for The Hex, Marti Belle says they are “Hex-celente”, which means “Hex-cellent” according to Allysin Kay.

At The Podium is Idol-Mania, and Tyrus is in a good mood. As he goes for the cheap heat with GA, with their educational skills. Tyrus gives props to BLK Jeez as an executive enforcer, and Jordan Clearwater looking like a banana daiquiri sundae (and I admit I chuckled at that, although the color is reminiscent of a Yellow Submarine). Davis said Cyon wanted moment of Tyrus’ time, and Tyrus is surprised but wants to hear this.

Cyon is out, grabs the mic, and says thank you to Tyrus. Cyon then goes on The Long and Winding Road  when he give thanks for learning about himself in the match, which was more than when he was growing up with a dad as NWA champ that he never knew. Cyon finally hops off the enigma ramp, and states he wants a rematch and will do anything for it. Tyrus sees something in his eyes he recalls, and he and Austin Idol says they’ll get back to him.

We then get Nick Aldis and IMPACT Knockouts champion, Mickie James at The Podium. James thanked Hogan for giving her all in last night’s PPV match, and puts her over as a future champ.  For now she is a fighting champ, and will put up the IMPACT Knockouts belt for anyone that can step up. Aldis then puts over his wife James as a hall of famer and a hall of fame mother and wife, and that winning is a family business. But for Aldis, he has an opportunity moving forward, and he decides to focus time in the tag team ranks and wants to rejoin with a man he known since day one:  Doug Williams.

Williams comes out to massive cheers, and thanks the NWA for the opportunity. He appreciates the offer by the former Brutus Magnus, and decides it’s time to go on the Magical Mystery Tour once again as The British Invasion. 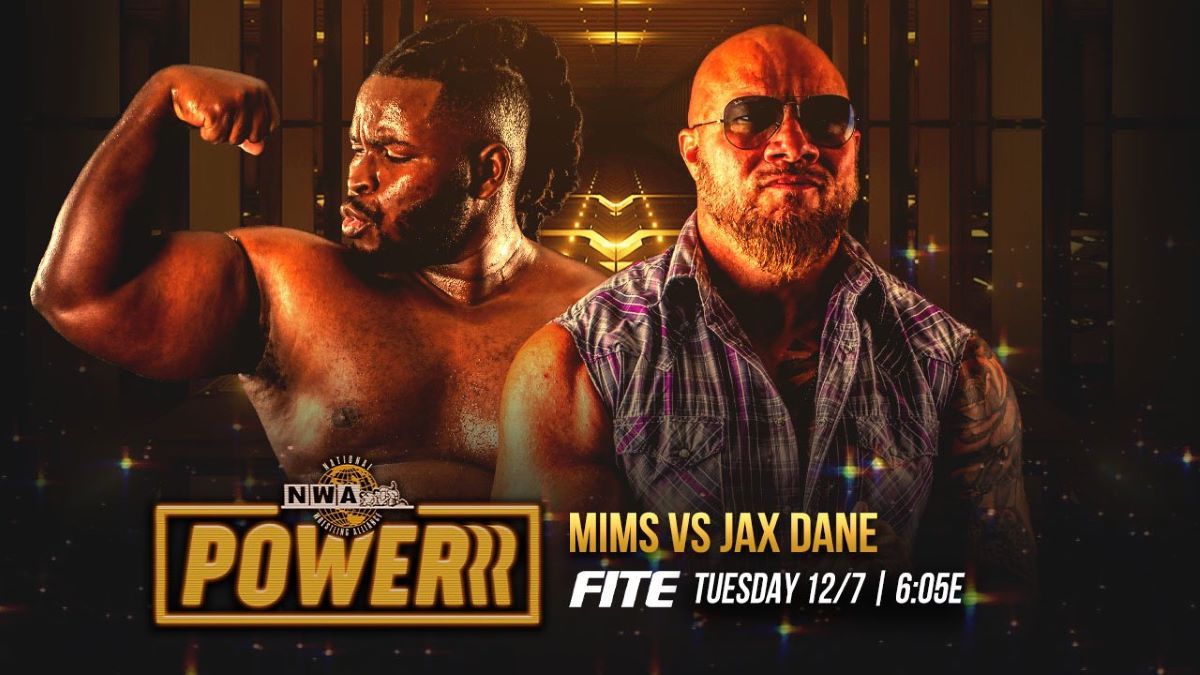 Since Mayweather states he is banned from being at ringside, he notes nothing is preventing him from calling the match.  As the fans chant “Former” to Dane for his precious accolades, tonight is a whole different Dane Event, as he goes Helter Skelter on Big Strong Mims.  Mims gets some hope spots in with some head-butts, but Dane rakes his eyes and delivers a vicious Samoan drop. He stalks Mims, coaxing him to get up, and Dane finishes with the “Pop the trunk” clothesline for the decisive three count.

After the match, Dane goes out to Mayweather’s position, and then walks to Davis to advise to be addressed as “The Dane Event.”

May Valentine is with Hawx Aerie members, Luke and PJ Hawx. PJ says they didn’t do well in the NWA Gauntlet tournament, but they can take it to tag team ranks. All of a sudden, JTG and Dirty Dango come out. And they suggest they should be the ones challenging The British Invasion tonight.  Luke says to watch what Hawx Aerie can do.

Back to Davis at The Podium, and says he keeps getting jumped from behind, whether it’s Knox, Adonis, or Cardona.  He just isn’t getting the respect he deserves, and tells them all if they want to challenge for the Ten Pounds of Gold to come direct to the champ. We then get the new and improved Aron Stevens in a cream colored robe and guy liner (It’s a thing.  Trust me.) comes out to congratulate Murdoch on his title defense.  But after “Keer-tose” helped him see the light, he tells the fans he came for the adulation before leaving. Murdoch is just flabbergasted, looking at Stevens like he was a Day Tripper.

But now, the moment we’ve all been waiting for.  The Main Event you need Eight Days a Week…

From the moment the bell rings, we are treating to PJ and Williams vying for position, with PJ’s technical amateur background a nice compliment to Williams’ catch wrestling skills.  Williams gets the younger Hawx in a roll up to a surfboard, and PJ powers out to reach the ropes to break the hold.

We get another tag, and Luke and Aldis have their own chain wrestling, but at a faster pace.  Aldis gets caught by Luke, and a quick tag by Hawx Aerie has Aldis in a double suplex for a two count.  PJ takes over, and the younger Hawx tries a running crossbody, but is caught by Aldis, and he transitions to a suplex.  Now it’s all British Invasion working over young PJ, then they focus on papa Luke, with Aldis getting him in a powerbomb to a Williams suplex to cover, but PJ breaks the Count.  He sends Aldis outside, and Luke and Williams go toe to toe in the ring, but The Ambassador Is able to hit The Chaos Theory Any Time At All to pin for the .ne, two, and three.

Your Winners via Pinfall:  The British Invasion

As Galli marvels at the match we saw, he and Strom and Sky acknowledge that Da Pope is still hospitalized after the beating he took in the final moments of Hard Times 2, and they show a clip where Cardona rammed him in to the steel steps.  They hope to have more information on his diagnosis, as the show goes to credits.

A Short Main Event, but very action packed, and who doesn’t love a good tag match.  Besides, All You Need Is Love.

Ok, I’m done with the Beatles references.  But the NWA looks to be emphasizing on the tag picture for the foreseeable future, and the roster is starting to fill to the brim with the opportunity.  Between that, and more interviews coming from Atlanta, we’ll see you in seven!