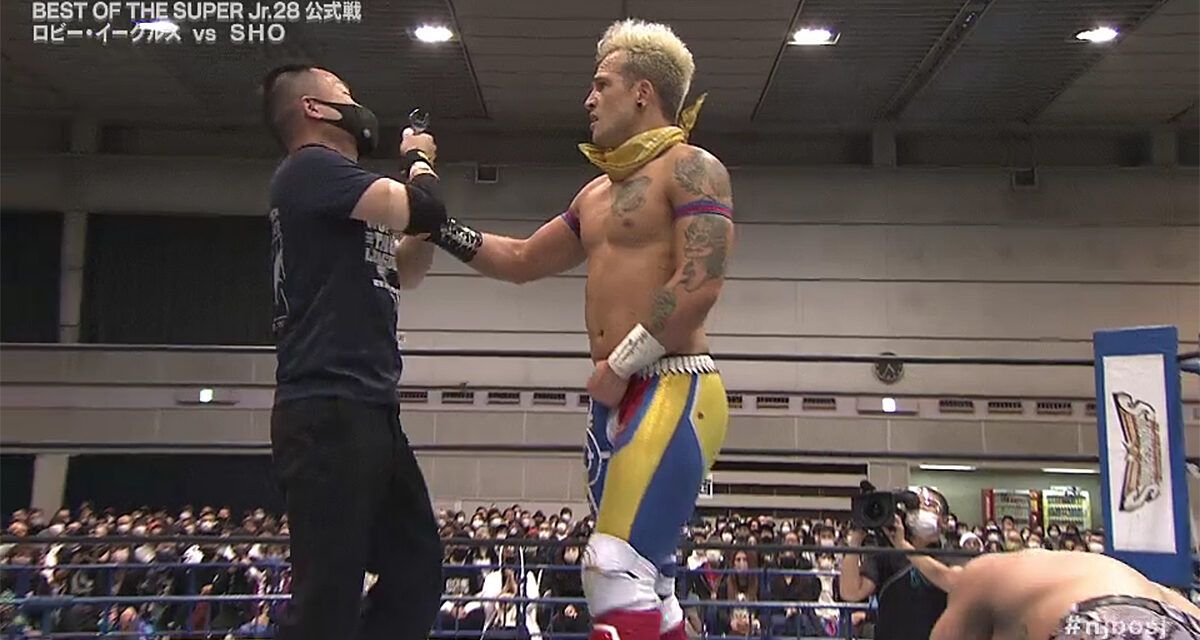 House of Torture member Sho continued to cheat his way to the top of the Best of the Super Juniors standings but tonight he was outsmarted. On night nine, he was defeated by the former IWGP Junior Heavyweight Champion, Robbie Eagles in their tournament match despite more shenanigans.

As the fight went to the floor Sho pulled a Young Lion in front of himself to avoid Eagles’ dive. Eagles checked on the fallen Young Lion. Sho threw Eagles into ringside barricade and choked him with his own bandana.

Later, Sho thwarted a stunner by throwing Eagles into the official. Sho would retrieve the wrench out of the bag he brings with him to the ring but Eagles would disarm him. Eagles thought about using the wrench on Sho until the official talked him out of it. Eagles surrendered the wrench. While the official was putting out of reach on the apron, Sho attempted to punch Eagles in the “lower abdomen”. Eagles blocked that and made Sho submit to the Robinson Special.

While Eagles’ 10 points moved him up the standings, Sho still leads the tournament overall with 12 points.

And back we go to the predictable…

Douki submits to the Yes Lock.

Although Kanemaru complains to the official, Yoh wins with a bridging pin.

Taguchi submits after Phantasmo super kicks him in the stomach.

Hiromu puts Wato away with a clothesline and a Time Bomb.

Desperado gets the win with a Pinche Loco.