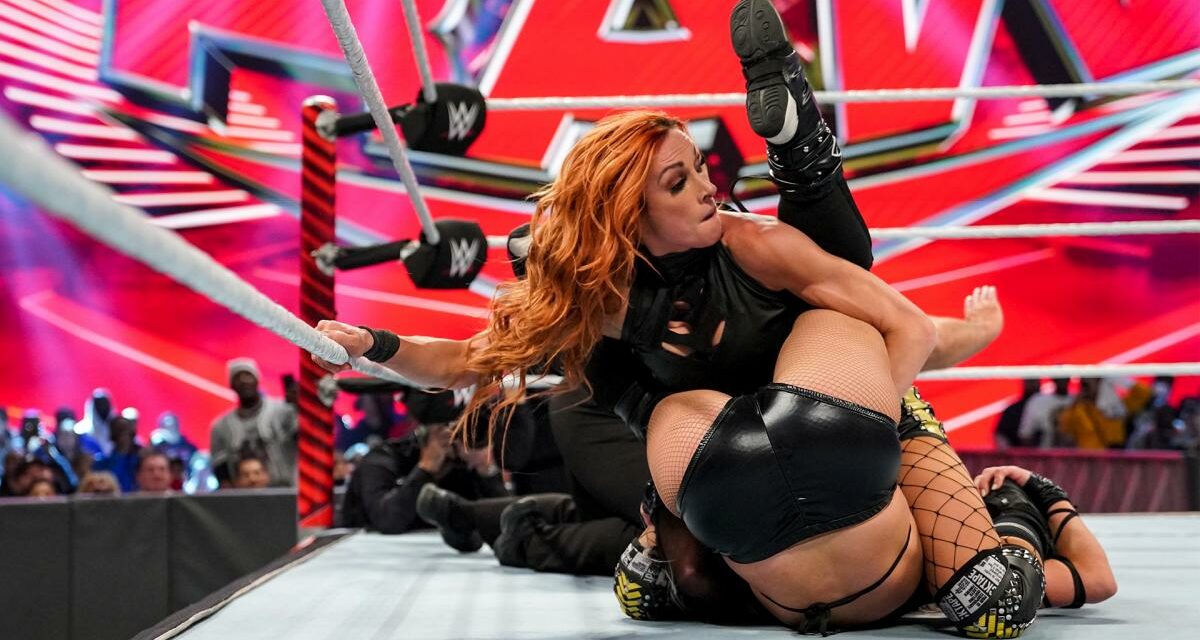 WWE is taking advantage of the first day of 2022 falling on a Saturday with their Day 1 pay per view. Last week, Seth Rollins announced that he would have a title match with Big E at that show, but then Kevin Owens was able to weasel his way in and make it a triple threat. Tonight, Big E will be taking on Kevin Owens in a steel cage. We also have a RAW Women’s title match on the card, so let’s get to the show.

Seth Rollins lets us know he will enjoy watching KO in a steel cage match. Big E vows to punish Owens tonight. KO calls the WWE Championship his and Big E is only holding it for him.

KO wants to end this match fast, immediately going for the cage door to leave. Big E puts a stop to that, driving Owens into the cage. Owens gets a chance to end the match after a sunset flip powerbomb off the turnbuckle, but can score a two count. Despite being a cage match, Seth Rollins finds a way to get involved, slamming the door on Kevin Owens.

Big E looks for the Big Ending off the top turnbuckle, but Owens escapes with a thumb to the eye. He follows with a frog splash, but only gets a two count. Big E hits the Uranage. Owens kicks out of the pin. Owens gets caught climbing the cage, and Big E hits the Big Ending from the top tope. The champ climbs toward the door. Owens can’t slow him down and Big E is able to escape.

Seth Rollins immediately pounces, beating up Big E on the floor. He then goes after KO in the ring. Big E intercepts Rollins going for the stomp, tosses him with an overhead belly to belly suplex. He then hits KO with another Big Ending for good measure.

Zelina and Nikki trade near falls early in the match. Zelina gets caught with her feet on the ropes on a pin, allowing Nikki to go up top. Zelina dodges the flying cross body and hits the Code Red to get the pin.

Riddle is dressed in a blazer from the ’80s, getting ready to commentate on the RAW Tag Team Title tournament. I’m sorry, bro-nament. Orton didn’t agree to any of this, but Riddle came prepared with another blazer.

Backstage, Nikki is upset over her loss and is approached by a fan. Unfortunately, that fan was talking to Jerry “The King” Lawler. An upset Nikki runs off.

Omos still isn’t happy with the deceitful tactics that AJ used last week; pretending he was blind. Styles with a Pele kick followed by a brainbuster on Ford. AJ wants the Phenomenal forearm, but Omos makes a blind tag. Dawkins drags AJ to the floor and Omos goes to the floor to help. Omos focuses on beating up Dawkins, which gets him counted out.

Winners via count out: The Street Profits

AJ stresses to Omos that he needs to listen to him. Omos walks out of the ring on his partner. Riddle hits the ring to interview AJ, who wants to know why he isn’t interviewing the winners. Riddle thinks this is a bigger story, wanting to know what is going on with Omos. Styles calls it miscommunication. Riddle wants Orton to contribute, but he declines.

Becky Lynch talks with Sarah Schreiber in the interview area about her match with Liv Morgan later tonight. Becky claims that no one wants Liv to win tonight. The fans just want to cheer an underdog and it’s just another Monday for the champ.

Backstage, Riddle tries to tell Orton that they are here to take the people on an emotional journey. Orton decides his broadcasting career is over for now.

Priest is still doing the open challenge. Ziggler distracts the champ and Roode is able to take advantage. He nails Priest from the apron and tosses him into the crowd. Back in the ring, Priest connects with a falcon arrow. Roode with a backstabber, but only gets a two count. The champ counters the Glorious DDT, but Roode counters the Reckoning. Priest kicks out of a roll up and hits the Reckoning to get the pin.

Doudrop attacks Bianca on the ramp from behind. Once the bell rings, Bianca is good to go. She taunts Doudrop while flipping over her. Doudrop blocks a drop kick and hits a senton. Doudrop brings the pain, but can’t finish Bianca off. Belair escapes off the apron and knocks Doudrop to the floor. Belair is yanked out of the ring and driven into the apron. Doudrop hits a splash on the floor. Belair floats over on a suplex attempt and delivers a spinebuster. Belair with a cross body, but can’t get the pin. Doudrop with a splash in the corner and some how Bianca kicks out. Doudrop rips at Bianca’s braid and head butts her. She misses on a cannonball. Belair gets Doudrop up for the KOD, but Dou is able to escape to the floor. She just walks away and heads back up the ramp. The ref counts ten and calls for the bell.

Winner via count out: Bianca Belair

Austin Theory stops by Mr. McMahon’s office. Vince gives Theory some advice and is thinking off putting him in a match tonight, but he is just playing mind games with him.

Miz welcomes Edge to the show. Maryse isn’t with him, because she’s too good for Memphis. Miz is surprised that Edge complimented him last week, which must mean he is up to something. Edge meant what he said last week. Miz tells Edge mentally he sounds weak. Miz doesn’t want kindness from Edge now, because where was that kindness in 2006 when he needed it.  The two go over their history. Edge wants to take on Miz, but he turns him down. Edge punches Miz in the face.

Sarah Schreiber gets a response from Liv Morgan after Lynch’s comments. Morgan thinks it scares Becky that everyone is watching her.

Riddle is back on commentary, but Orton is no where to be seen. Dominik with a big slap to Chad Gable, throwing him off his game momentarily. In fact Dominik does all the work in the match, never tagging in his father. And Otis never gets a tag either. Gable with a dragon screw and goes up top for a moonsault. Dom rolls away and is able to counter with a roll up and get the pin.

After the match, Riddle is on site for the post match interview. Otis slams him to the mat.

Austin Theory tries to impress Mr. McMahon with jumping jacks. Vince wants Theory to impress him with his mind.

I have a feeling this match is just to set up something else. Balor nearly gets choke slammed off the top turnbuckle, but knocks T-Bar to the mat. He hits the Coup de Grace and covers to get the win.

After the match, Austin Theory attacks Balor as he celebrates. Theory with the ATL and then gets a selfie.

24/7 Champion Dana Brooke is walking backstage when she is startled by R Truth and Akira Tozawa. Reggie wants to talk to her and actually helps her avoid an attack from Tamina.

MVP and Bobby Lashley tell Kevin Patrick that the attack earlier in the night because Lashley was never mentioned as a challenger in the title match. Those were the consequences.

Lynch runs Morgan over and then taunts her in the middle of the ring. Morgan sends the champ scurrying out to the floor. Becky looks for the Dis-Arm-Her but Morgan is able to escape. A drop kick from Liv connects. Lynch knocks Morgan from the ring, but Liv ducks a sliding kick and hits knees to the face. Morgan follows with a flying cross body through the ropes. Liv climbs the turnbuckle, but Lynch meets her there. A superplex sends both women crashing to the mat.

After a commercial break, Lynch has a chin lock applied and hits an inverted DDT. The champ runs into a step up enziguri and both women are down on the mat. Morgan with a Thesz press and follows with a running knee in the corner. Morgan hits double knees to the face, but can’t get the three count. Lynch with a kick that sends Morgan to the corner. A head scissors sends Lynch to the apron. Morgan with a stomp to the back and goes up top again. She connects with a missile drop kick, and locks in the Rings of Saturn. Lynch locks in the Dis-Arm-Her, but Morgan is able to get to the ropes. Morgan counters the Man Handle slam with a roll up. Lynch counters the roll up and grabs the ropes to make the pin. The ref doesn’t see it and makes the three count.

See you in a week.

RAW was much better this week as the show focused on wrestling. Sure there was some more Austin Theory nonsense, but what are you goin to to do? The tag team tournament is a great idea, but is it really a tournament with only four teams? The cage match to start was solid. With a three hour show, you would think the main event could get some more time. Becky Lynch and Liv Morgan could have gone twice as long with out any complaints here.