SmackDown lowers the bar and then limbo dances under it 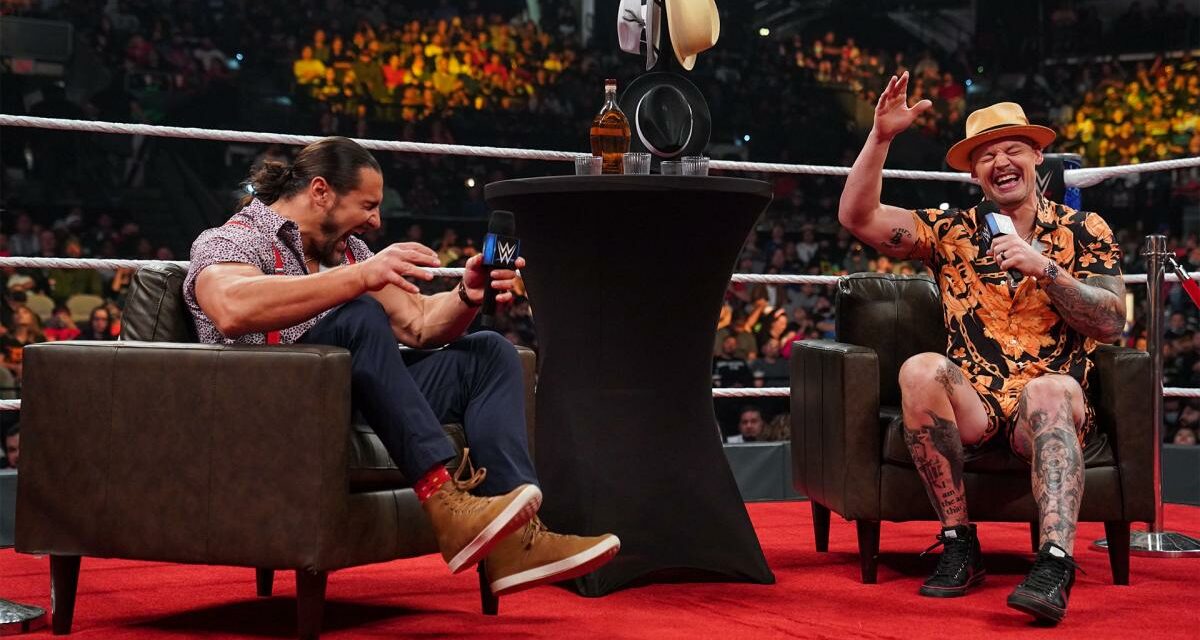 There’s no way to spin this: SmackDown has been average at best lately, but one could at least always count on solid Friday night matches. Without even those to bolster tonight’s show, the lazily written segments become more obvious and the whole thing falls apart. Well, let’s get to it.

A positively giddy-looking and bouncing Brock Lesnar is first in the ring tonight — short one million dollars from paying off his fine, we’re reminded by Michael Cole. When Lesnar is handed a mic, he announces that he is here for one reason: the Universal Championship. Before he gets much further, Sami Zayn makes his entrance and irritates Lesnar by his presence. In truth, of course, Zayn simply saved us from hearing too much of Lesnar’s usual awkwardness on the mic.

Zayn talks about his upcoming title opportunity against Roman Reigns at the Day 1 pay-per-view on New Year’s Day, but Lesnar goads Zayn into trying to move his match to tonight — and he’ll be in Zayn’s corner if he does. 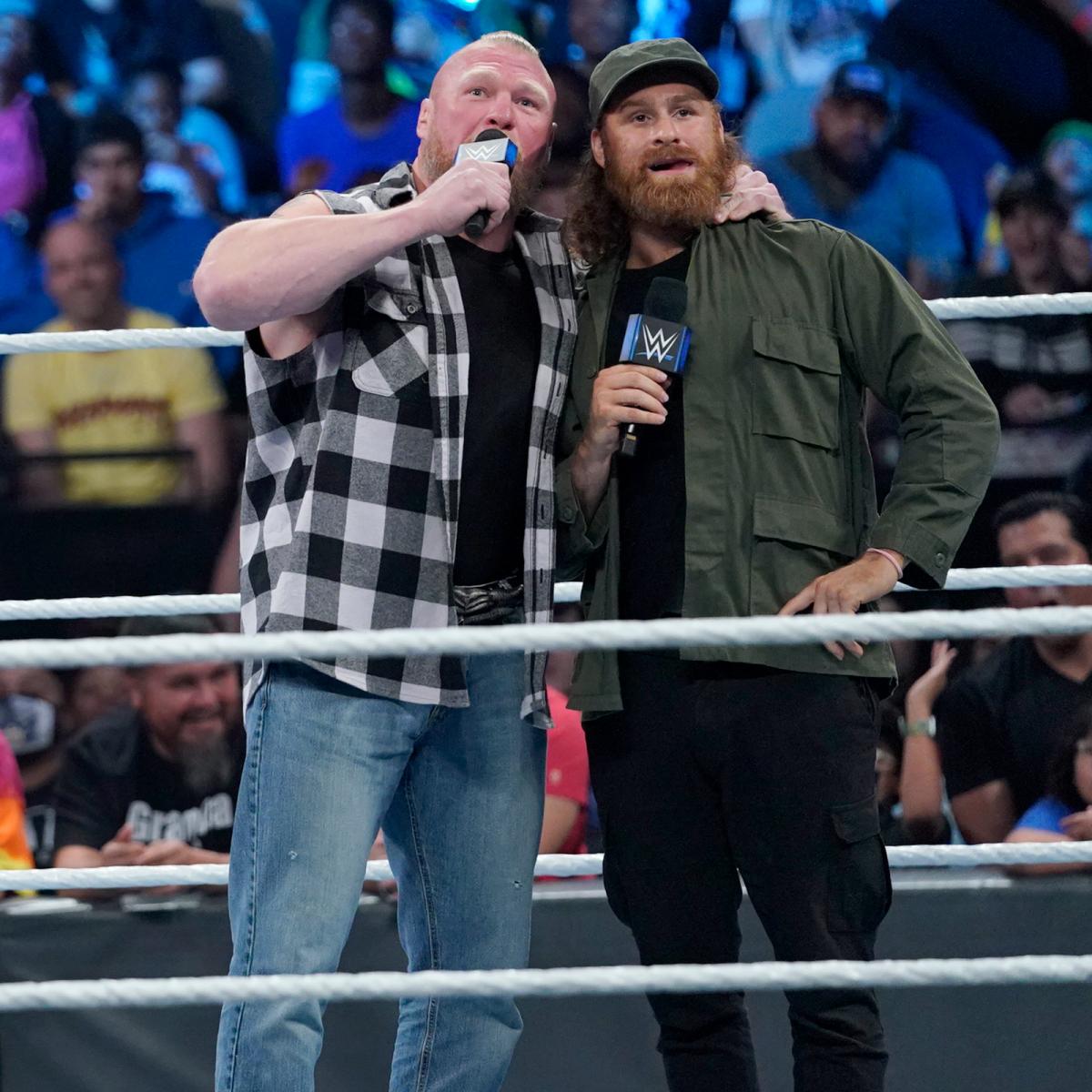 After a break, Zayn talks to Sonya Deville who agrees to make the match, because Lesnar is there again to insist. I remember a time when she and Adam Pearce said they couldn’t possibly make a Women’s Title match happen in one night because there wasn’t enough time to promote it. Some people remember these details, WWE. Deville then grants Lesnar a match against the winner at Day 1. McAfee refers to Lesnar as The Saskatchewan Ox – that makes five mentions!

Shayna gets a promo package looking back on times she beat up on the now-released Nia Jax and Eva Marie — Pat McAfee dubs the move she used the “Future Endeavours Kick”. As if to prove that Baszler is about to be taken seriously again, she kicks Banks hard to the mat while Banks delivers her own meek kick in return as they battle to the apron. Banks hits a meteora from the apron to the floor and we break for ads.

Returning to action, Baszler drives a knee hard into Banks’ abdomen, followed by some badmouthing. Banks ups her game with a tougher-looking kick and a tornado DDT for a two-count. Baszler locks in a Kirifuda Clutch, but Banks rolls back to create a pinning position, forcing Baszler to release and kick out. Banks turns it into a Bank Statement, but Baszler easily escapes. As Shayna tries for a gutwrench suplex, Banks wriggles out of the hold and stacks Baszler up for the three count.

Deville is on the phone with Adam Pearce, who is hesitant to come to the show now that Lesnar is around. After Deville hangs up, McIntyre wants a word with her, specifically wanting to know why he was left off the battle royale last week. One would think Sonya might take this time to ask McIntyre why he tried to murder Los Lotharios last week, but nah. Deville says it was Adam Pearce who made the list — even though Pearce said last week that he was awaiting the list, not making it (as I said, some people pay attention to details like that). Anyway, McIntyre holds up his sword and says to let Pearce know he wants to talk, which is again an unusually threatening action for a babyface.

Ready for Happy Talk? Happy Corbin, wearing an amazing matching vacation shorts and shirt combo, looks back on the battle royal, and he and Madcap Moss have a laugh about the moment that Corbin eliminated his buddy. They  then make fun of Jeff Hardy for losing to Sami Zayn, and then McIntyre for being so unhappy. Well, that brings the increasingly murderous-looking McIntyre out with his sword, but it’s all a ruse as Hardy attacks Corbin and Moss from behind. McIntyre concludes the sneak attack with a Claymore on Moss.

The Raiders start off hot, with Erik slamming Ivar on top of Garza, but Carrillo dodges Erik’s follow-up attack by leaping through the ropes and diving into Ivar. Garza pops up with a superkick on Erik, and Los Lotharios set up for their finisher before a Rick Boogs guitar solo from the announcer’s table distracts them (a solo which came so very late, leaving Garza several awkward moments to threaten delivering the knock-out blow but unable to do so while he waited). 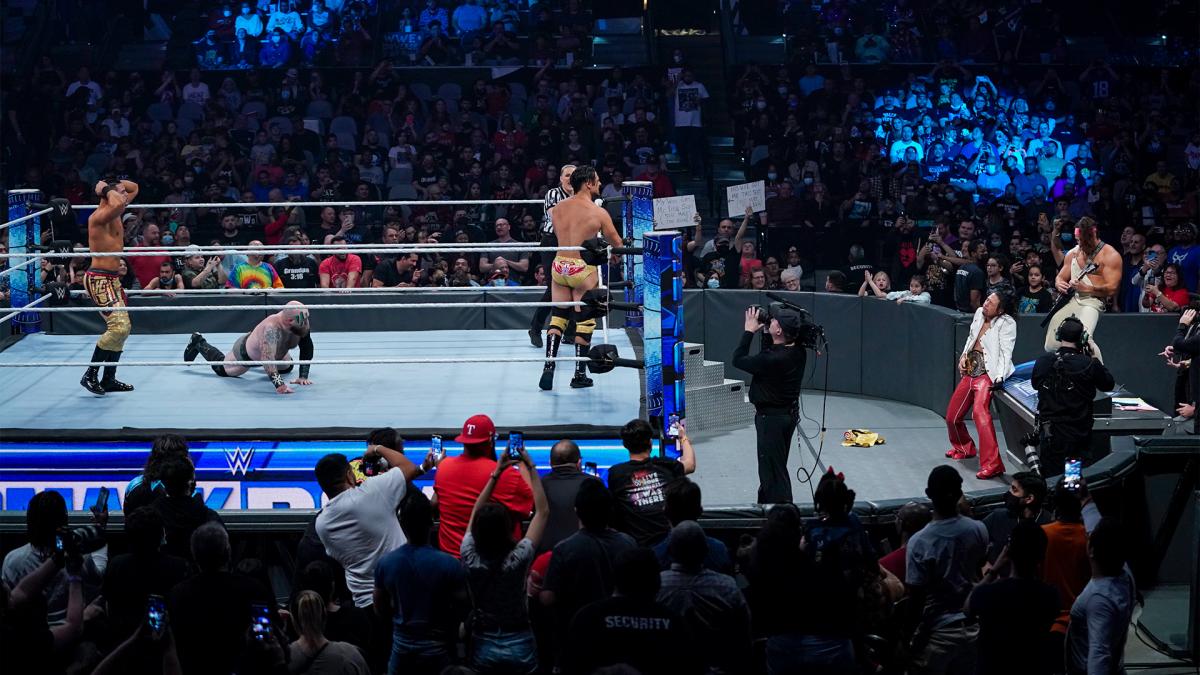 This whole bit was still better than that time the Raiders went up against ninjas. Photo: WWE

It doesn’t work anyway, as Carrillo rolls Erik up for the win.

You’d think the Viking Raiders would be very mad at Boogs (and Shinsuke Nakamura, who’s out on the floor with him), but instead he starts playing their theme song and they dance along. So, I guess wins and losses don’t matter.

Backstage again, Toni Storm tells Kayla Braxton that she’s not intimidated by or afraid of Charlotte Flair. She looks forward to when Flair accepts her challenge, even though Flair already did before Survivor Series (some people pay attention to this stuff, you know).

Jey gets some time on the mic before the match, claiming that he’s going to follow up the crushing of Woods’ crown with the crushing of his spirit. Woods pauses during his entrance as well to grab a mic, and he announces the return of Kofi Kingston to be by his side.

Uso starts fast, running Woods hard into the corner before delivering a smooth pop-up neckbreaker. Woods dodges a corner charge and lays in chops, punches, and a clothesline. As Woods mounts the turnbuckles, Jimmy grabs his ankle and pulls him to the floor, bringing about an immediate end to the match.

A little scrap breaks out amongst the four but it doesn’t last long as The Usos retreat.

Back in Reigns’ temporary office, he shakes his head (as he does a lot) and says that with Kingston returning and Pearce not here, there are a lot of things that he didn’t know about. He asks Paul Heyman if he knew that Brock Lesnar was going to be here tonight. Well, yeah, he did, just like anyone else paying attention to the announcement last week that Lesnar would be here. Heyman tries to spin him out of it by saying “I was as surprised last week as you were.”

Reigns continues: “Did you know that he was planning on being in Sami Zayn’s corner tonight?” Well, he can’t have, can he? Because nobody knew that Zayn was getting his title match tonight. Heyman has no spin for that one.

Elsewhere, Kayla Braxton is backstage with Kingston and Woods, who are promising that they will exact revenge on The Usos by taking their titles at the Day 1 pay-per-view.

In the ring, Charlotte Flair talks herself up as usual, claiming that people get noticed by talking about her. She refuses Toni Storm’s challenge, even though, once again, she’d already said yes before Survivor Series. Flair waits for an Angel Garza-length eternity for a flunkie to hold the ropes open for her to make her exit. Halfway up the ramp, she turns away from the entranceway, but a little too late to believably miss seeing Storm sneak down holding a pie.

Storm runs in place as excitedly as I seem to remember Marty Jannetty doing in his return after the Barbershop Superkick, and pies Flair in the forehead when she turns around. Aaah, sweet revenge.

These two certainly don’t look like they’ve skipped a beat, trading uppercuts to open the match while Cole and McAfee trade exaggerations (Michael says that Sheamus is perhaps the most underrated wrestler in the history of the WWE, while Pat answers back that Cesaro is one of the most impressive humans ever created … way to go, Cesaro’s parents).

Cesaro clotheslines Sheamus over the top rope to the floor, chasing him down and running him over the barricade and into the announcer’s table. Back in the ring, they engage in some Anakin/Obi-Wan banter with Sheamus telling Cesaro that he held him back for too long, while Cesaro responds by saying Sheamus was like a freaking brother to him. It’s all very emotional until Sheamus drops his former partner with a Brogue Kick for the win.

Backstage, Naomi tracks down Sonya Deville and asks her again for a match, which Deville agrees to — but only when she decides. After a recap of Monday Night Raw, Sami Zayn heads to the ring for his title match, grabs a mic and tells the fans that when he wins it won’t be any thanks to them. Lesnar heads to the ring and very angrily thrice suplexes Zayn, and follows with two F-5s before pinning Zayn up on his feet against the corner turnbuckles, ready for his “match”.

So, with about five minutes left in the broadcast, Reigns makes his long entrance, gets in the ring, hits a spear, locks in a Guillotine to which Zayn immediately submits, and that’s the ballgame. 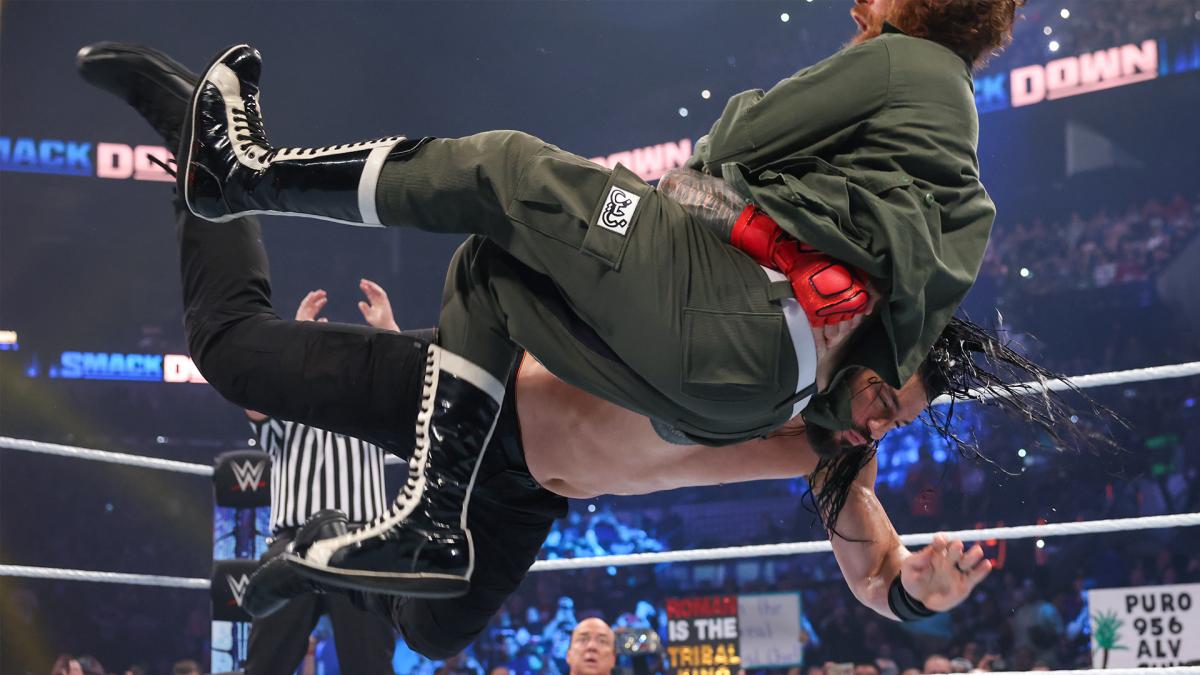 Here’s what the worst episode of SmackDown I can remember consisted of: sloppy, nonsenical, revisionist writing; poor mic work by Reigns and Lesnar; clumsy timing throughout the evening; an embarrassing usage of Sami Zayn; and not a single match that was allowed any chance to shine.  As tempted as I am to score it lower, I give it one star because there are a lot of people on this show, both in front and behind the camera, who are trying really hard to make lemonade out of what they have to work with, but it’s just not happening.