Pac fades to Black on Rampage 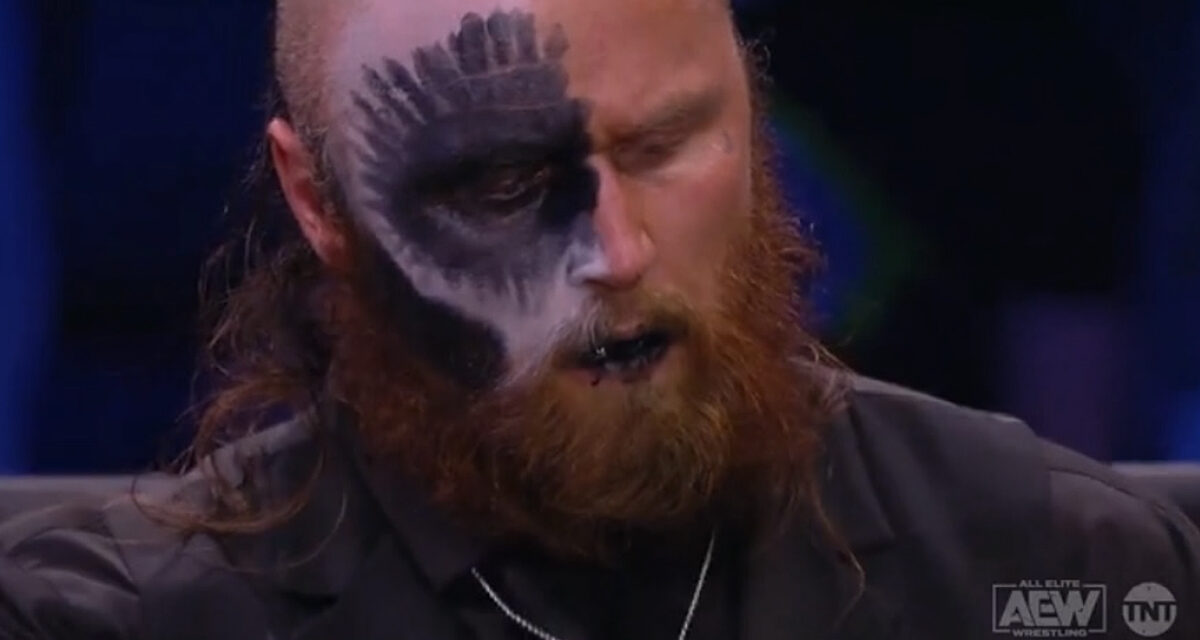 This week’s AEW TNT Championship match on Rampage was a good match but it could have been a great match. The bout featured Tony Nese, a fantastic talent who has always been deserving of a bigger and better spotlight, in his first centre stage match in AEW against the high flying champion, Sammy Guevara.

The fatal flaw in the match was one of the things AEW has been rightly criticized for in the past. Twice in the match, Guevara should have sold a incredibly ruthless move, instead he bounced right back up like the freaking Undertaker. One of the those instances was when Nese gave Sammy a horrendous buckle bomb. Sammy just shook it off as if Nese had patted him on the head instead of slamming his neck and spine into a turnbuckle with such savage velocity. It is this kind of illogical and implausible no-selling that ruins and degrades entire matches and the efforts of everyone involved. 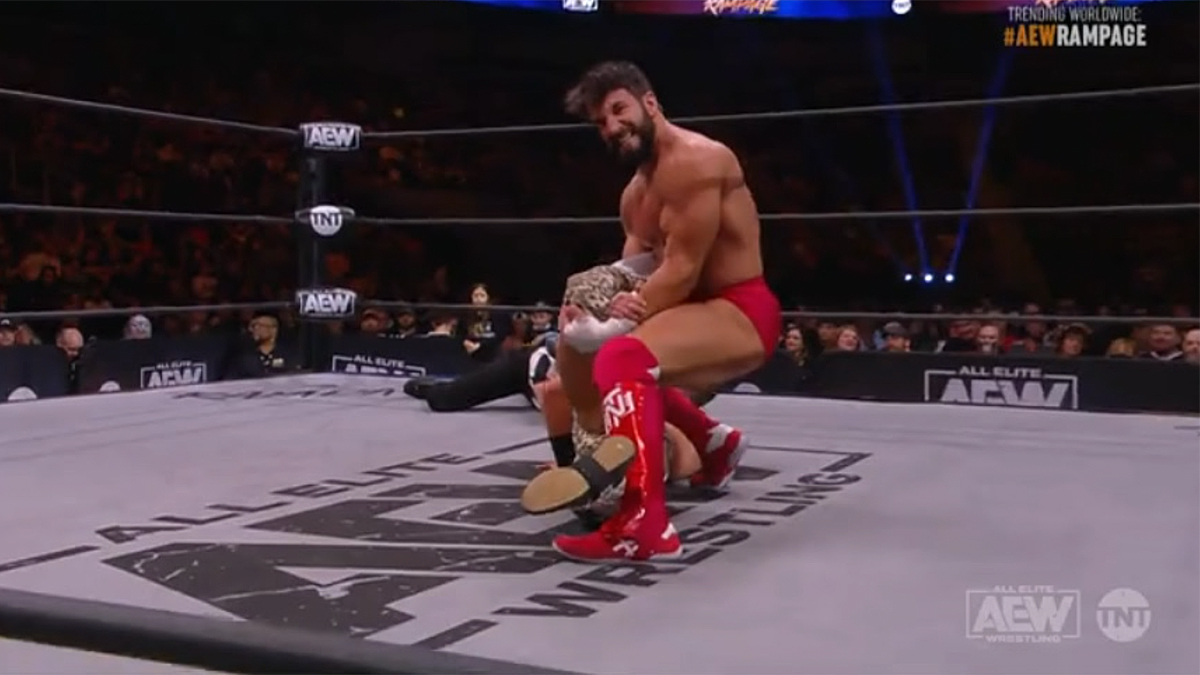 In this case, Sammy’s no-selling the buckle bomb led to him pump kicking Nese and pinning him with a GTH. Nese really deserved better and so did the match-up which would have been really, really stellar if Sammy would have kept things within the realm of logic and sound judgement. If nothing else, Nese showed AEW fans what he was truly capable of and why the promotion’s investment in him will pay off in the future if Khan books him and uses him properly.

AEW threw some big old logs on the bonfire that could be an amazing feud between Malakai Black and Pac. Pac replaced Rey Fénix teaming with his other Death Triangle pal Penta El Cero Miedo against FTR.

No matter how many times I write it Death Triangle sounds like a really bad kung fu movie from the seventies.

Pac is wearing a patch over his right eye after the attack by Malakai Black on Dynamite. Since the crowd is chanting for Penta, Pac ducks out of starting the match.

Penta’s spinning toe hold had Wheeler tasting the mat. Wheeler has the wherewithal to escape to neutral corner but takes a stereo drop kick from Penta and Pac. Wheeler smartly bails out to the floor as Tully Blanchard yells at the official.

Pac takes Fenix’s part in that Dudley Boys-esque humiliating attack which is executed on Dax’s “lower abdomen”. Wheeler saves the match for FTR dragging Penta to their corner. They double team Penta. An assisted flying leg drop gets FTR a two count.

Pac attempts a springboard move off the ropes but because of the patch he trips himself up and falls to the mat. FTR cuts Pac off from Penta. Cash sweeps Penta off apron so he cannot make the much needed tag to Pac.

FTR performs Demolition’s Decapitation for a two count on Pac. After a shotgun drop kick from the top rope, Pac is able to tag in Penta who fights off both members of FTR as Pac literally collapses to the floor unable to help him for now.

Once Pac is back in, he knocks Tully Blanchard off the apron as Wheeler gives Penta a swinging DDT on the floor. Pac clotheslines Dax over the ropes to the floor. Pac’s top rope moonsault bowls over FTR on the floor. 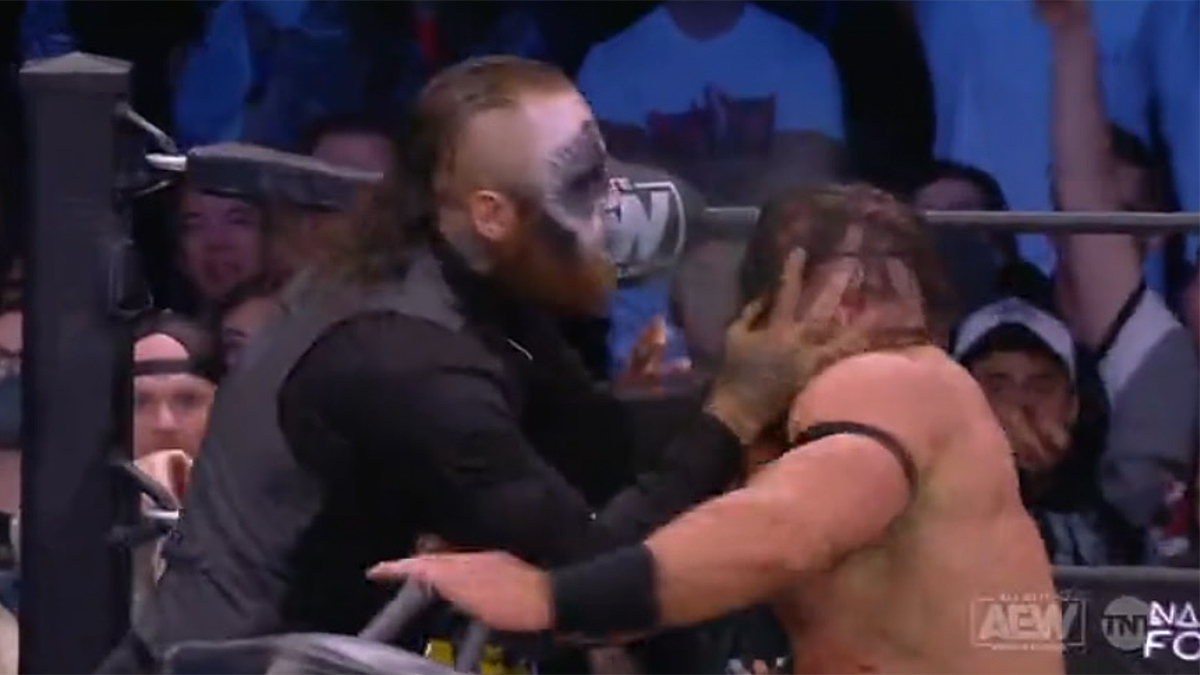 Malakai Black arrives spitting his black mist into Pac’s face. Dax rolls up Pac for the three count. FTR rip of Penta’s mask and parade around with it laughing and mocking him. Black descends on a fallen Pac digging his fingers into Pac’s eye. Black’s hand comes up bloody. Yuck!

Speaking of “eyes”, here’s Metallica with Eye of the Beholder from the iconic … And Justice For All release.

Do you hear what I hear? Doors are slamming shut
Limit your imagination, keep you where they must
Do you feel what I feel? Bittering distress
Who decides what you express?
Do you take what I take? Endurance is the word
Moving back instead of forward seems to me absurd

Christian Cage pumps up his boys The Jurassic Express. “If it is the last thing I do in this business I will make sure Luchasaurus and Jungle Boy become the new AEW Tag Team Champions!” he promises.

Thunder Rosa is on guest commentary…so you know what that means. Rosa reveals that Kai is one of her students so she is there for moral support too tonight. Kai looks like an extra from a Mortal Kombat movie. Cargill pins Kai after like three moves. Cargill continues to beat the tar out of Kai for not ‘finishing her’. A furious Rosa runs down to the ring, as we knew she would. Cargill and Rosa brawl as officials try to pull them apart.

Adam Cole calls Orange Cassidy the laughing stock of AEW. The long and short of it, the Young Bucks challenge Chuck Taylor and Rocky Romero to a match on Dynamite.

We get a replay of Chris Jericho coming to the aid of Eddie Kingston as he was swarmed by 3point0 on Rampage and then getting attacked by them on Dynamite a days later. Eddie Kingston is sitting on concrete steps in an alley somewhere and no, ex-sailor Cactus Jack is nowhere in sight. Not sure why Kingston is there but I don’t freaking care. AEW can never too much of the phenomenal Eddie Kingston.

“Congratulations. You beat up the great Chris Jericho and I do not care. Chris has nothing to do with me. You two do. You want to beat me up after my match with Daniel Garcia? You want to keep this going? You guys are going to learn something real plain and clear. You reap what you sow,” says Kingston to 3point0.

Bryan Danielson and John Silver trash talk each other before their match on Dynamite this week.

It was quality over quantity for Rampage this week. Besides the throwaway Cargill bout, the show was very well balanced and just flying by, especially if you watched that predictable clunker of a pro wrestling show that was on earlier in the evening. The big lesson for AEW is to stop that no-selling that is popular with some of their talent like the Young Bucks. That kind of nonsense makes a mockery of the business and degrades matches.