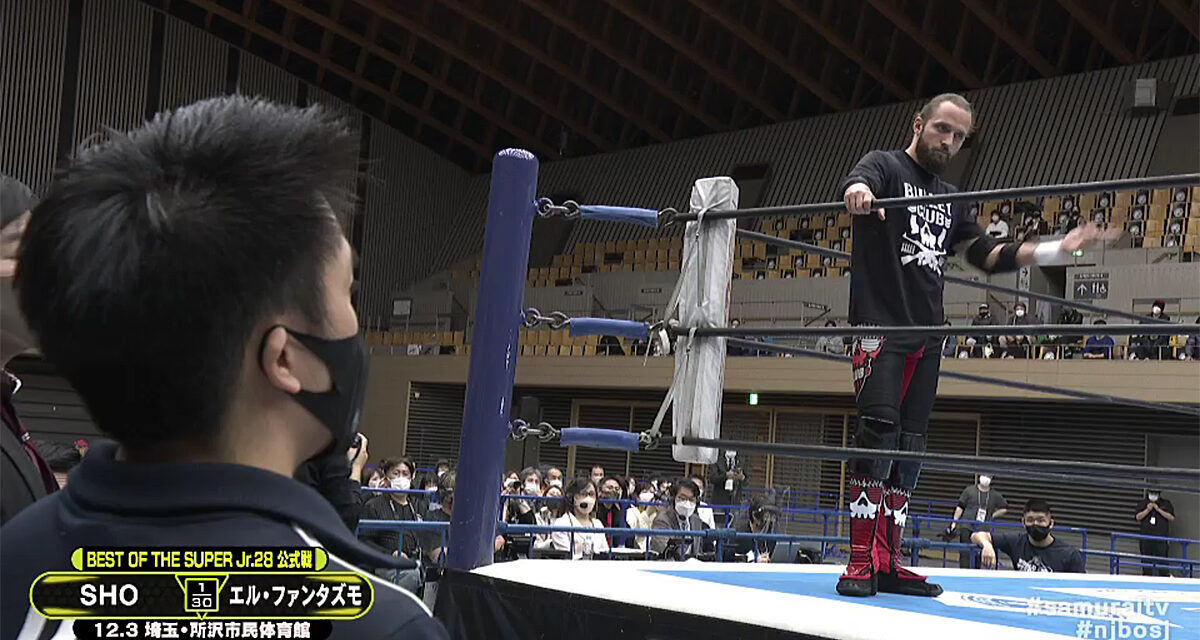 The rift between Bullet Club and the sub-faction The House of Torture became even more evident at NJPW’s Best of the Super Jr. tournament.

On night seven, Bullet Club members El Phantasmo and Sho were set to square in their match-up. Sho is a member of the House of Torture along with Dick Togo, Yujiro Takahashi and leader Evil.

Sho asked Phantasmo to participate in the “Too Sweet” salute before they locked up as is per the Bullet Club tradition. Phantasmo turned his back on Sho.

“This is the REAL Bullet Club. You are the fake Bullet Club!” said Phantasmo displaying his shirt to Sho.

An angry Sho stood back with his hands on his hips yelling at Phantasmo in Japanese. Unfortunately, neither I nor Phantasmo know how to speak Japanese.

Phantasmo threw up his hands as he stood in a corner.

“I don’t speak Japanese. Can you please tell me what he said?” asked Phantasmo calling over an interpreter.

“You give up these two points for me and Bullet Club so no matter what happens he will win the Best of the Super Juniors this year,” explained the interpreter.

The crowd laughed at that one as Phantasmo gyrated in the ring.

Sho asked Phantasmo to do the “Too Sweet” gesture again.

“Tell him Too Sweet in Japanese,” said Phantasmo.

“Too Sweet,” said a confused interpreter which had the crowd howling again.

An impatient referee called for the bell.

As Phantasmo went to Too Sweet Sho, Sho pulled him into his Snake Bite submission.

Phantasmo would end up winning the match with his suspicious Sudden Death superkick hitting Sho in the stomach. Sho was in so much pain he quit the match handing the two points to Phantasmo. Phantasmo left the ring without checking on Sho.

You don’t need a crystal ball to predict this one.

In big win for Bushi he scores the victory with an MX. Come on, NJPW. Bushi really is deserving of a serious, meaningful push already.

Takahashi escapes the ankle lock to pin Taguchi with a roll-up.

Yoh continues his winning streak with a Direct Drive brainbuster.

Night seven’s World Tag League results were postponed as the event was on a VOD delay. Here are the current standings and results.

The United Empire double team Tiger Mask for the win.

After a lot of shenanigans, Evil pins Tonga.

Sabre Jr. counters Sanada’s bridging pin so the Tekkers can clobber him with Zack Mephisto.