Behind the Gimmick Table: Sharp goes from gamer to promoter 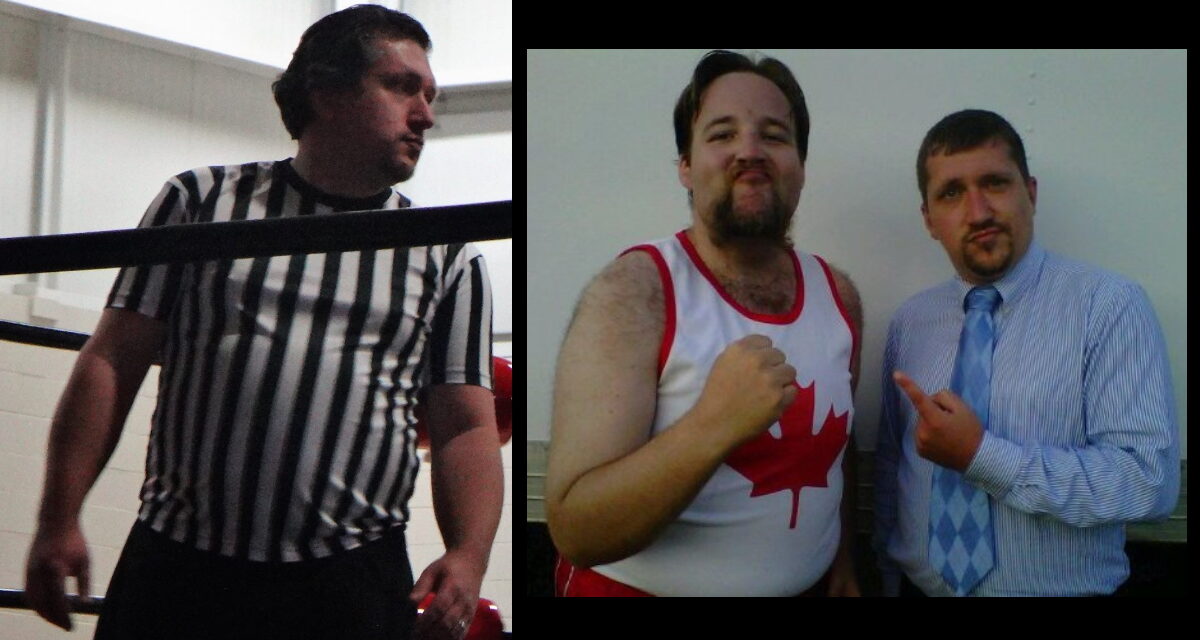 In the era of COVID-19 bureaucracy, drawing a live event attendance is a double-edged sword.

On the one hand many are itching to return to normalcy at all costs, while others proceed more cautiously.

Despite this dichotomy, promoter Derek Paul Sharp has excelled to unprecedented success with his Ontario-based Northhumberland Pro Wrestling promotion.

Manifesting this reality has been a long road for Sharp. It began in the mid 1980s, when he was a ten year old wrestling fan in Oshawa, Ontario.

Sharp’s introduction to wrestling was typical for the Rock ’n’ Wrestling era — he saw it on TV and was hooked to it, and any related media he could find. Live events at Maple Leaf Gardens and elsewhere were a regular part of his diet, but the direction his fandom took him was A-typical. It was through the advertisements in the pages of wrestling magazines that Sharp enriched his interest in “the book” aspect of wrestling. 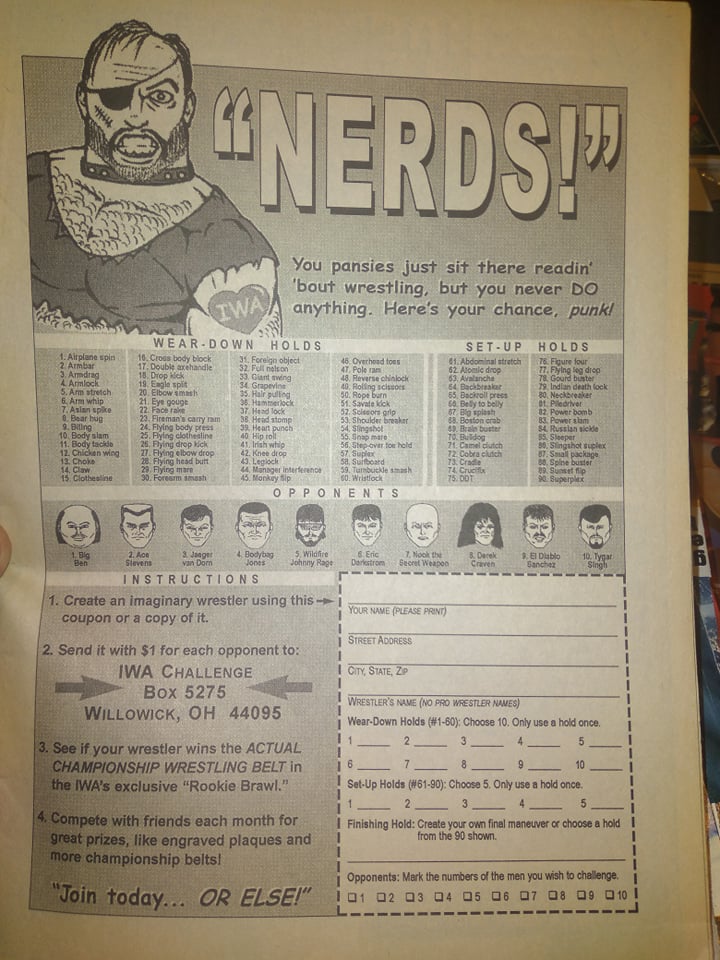 A vintage “Play by Mail” advertisement as seen in a 1998 wrestling magazine.

Already having accumulated three dozen spiral notebooks containing the detailed records and results of his action figure wrestling league, “Play by Mail” wrestling games were what offered Sharp a deeper and interactive, unique experience. He explained the mechanics to SlamWrestling.net: “Every month, you would receive a bulletin of all the cards in the fed [your wrestler(s)] were in. Most were two bucks a match and you’d send in who you wanted to wrestle and send in your trash talk.” A computer simulation handled the results based on the holds a player assigned to their wrestler.

As technology advanced, so too did this type of roleplaying experience. In the ’90s, Sharpe founded himself deeply involved in pro wrestling Electronic Federations, or  “E-Feds.”

The instantaneous communication, as opposed to the weeks waiting for regular mail for the Play by Mail interactions, allowed for much more sophisticated and immersive gameplay. Sharp reveled in the action and would take this as far as he could as an E-Fed owner/manager. In those games Sharp, opted for a combination of interaction through written promos, submitted by users, as well as the owners’ creative direction; those decisions would determine the direction of the stories in the weekly events as opposed to a computer simulation. Sharp was very in depth with his approach. “I wrote 70% of the content [matches and segments]. Volunteers did the rest. I don’t think I ever wrote a match under 10,000 words.” 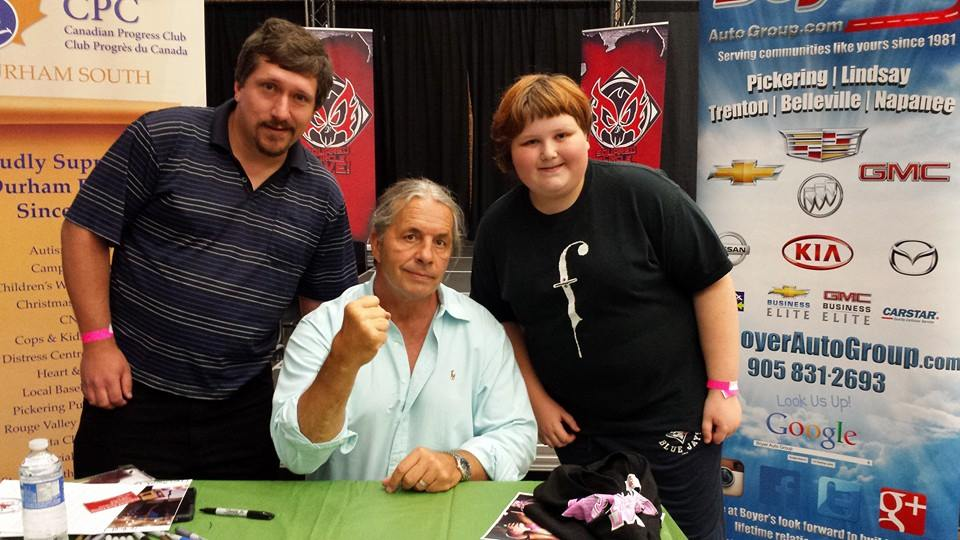 In the early 2000s, Sharp drifted away from wrestling with the birth of his son, Owen, but within a decade, with his son now a fan too, his interest in the sport returned with a vengeance.

In 2010, they attended a local show in Oshawa, after which he took to Facebook to express his enjoyment and interest in becoming a manager. He was recommended to Jessy Jones by wrestler Anthony Darko. 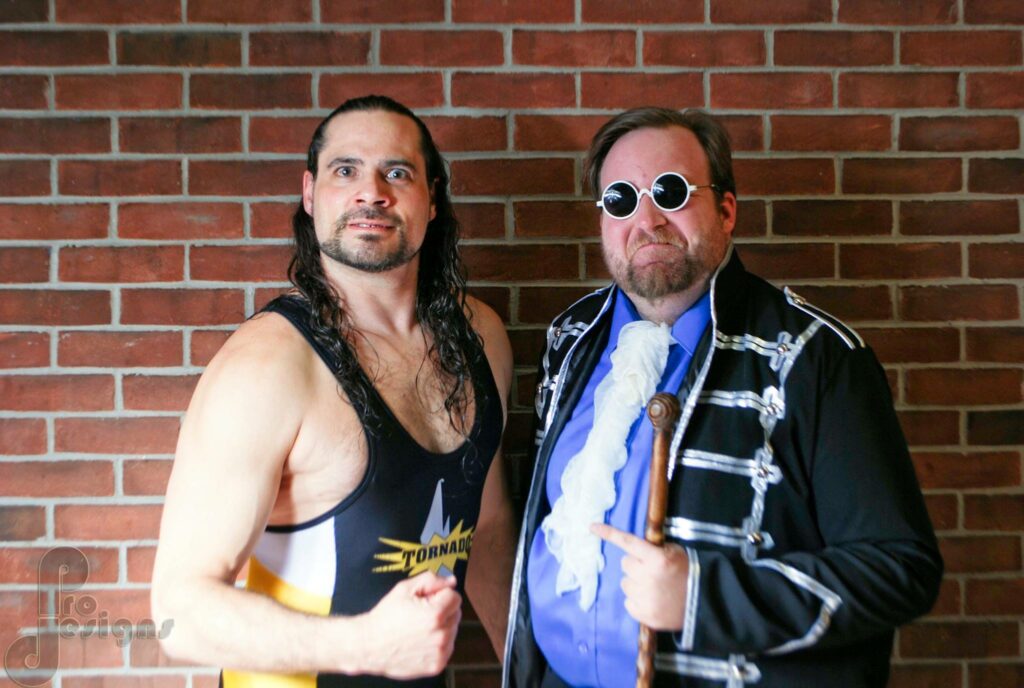 In this modern era of wrestling, managers are a rarity and training schools generally do not offer such training. The task required something a little more nuanced, that Jones provided. For a year, Sharp traveled with Jones to and from his bookings. At first, he given backstage and ringside tasks, then graduated to referee and finally manager. Of course, he was getting the all-important lessons while traveling in the car.

Sharp worked for a few local promotions, refereeing and managing, before the insurance salesman decided to put his education and observations to use in a different way. “I had seen a lot of both the good and bad that promoters do in running a show and I just thought, ‘I think I can do a really good job taking what I’ve learned and putting a show together.’”

With the support of his wife, and his business partner Lionel Poizner — a non-fan who he met while they were both Trillium party municipal candidates — Northumberland Pro Wrestling put Sharpe’s theory put into practice. The community has come out to support the local venture, drawing a crowd of 400 attendees and attracting numerous sponsors.

NPW has 12 monthly events scheduled for 2022, the next one coming on January 22, 2022, in the Coburg Community Center, which features the unique and unprecedented “Northumberland Royal” tournament to crown the promotion’s inaugural champion.