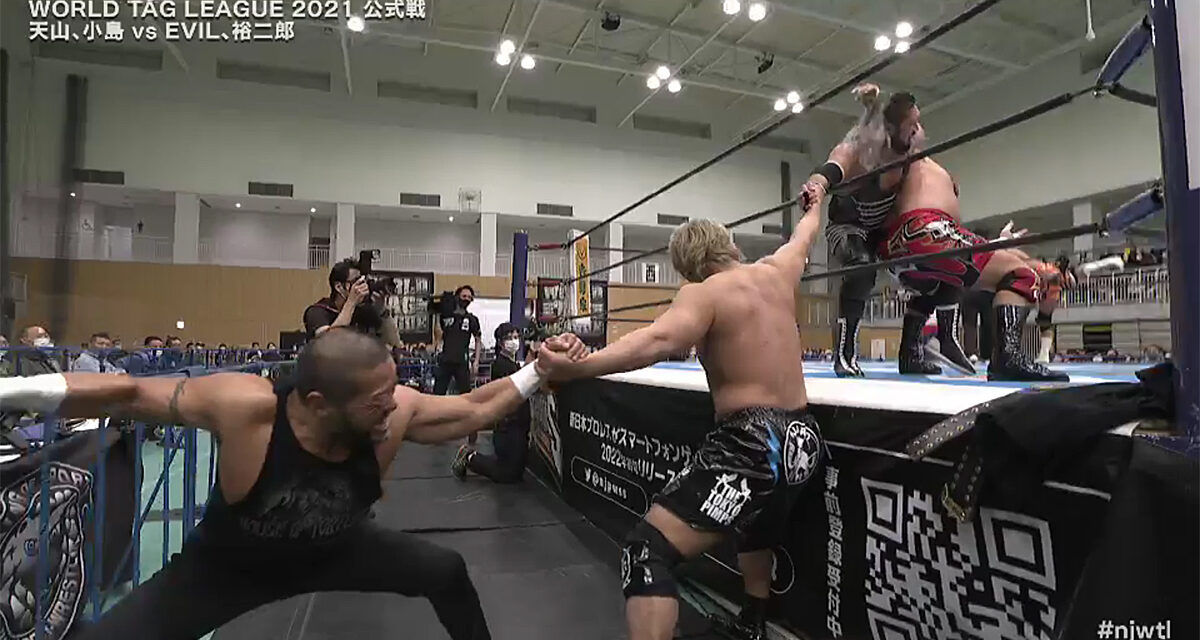 With their win over Toru Yano and Hiroshi Tanahashi today, SANADA and Tetsuya Naito lead the World Tag League standings with eight points. The big news of night four though was that The United Empire defeated Dangerous Tekkers, the champions and House of Torture notched their very first win.

United Empire pinned Taichi with their assisted, double team stunner deal and then paraded around the ring with the title belts. 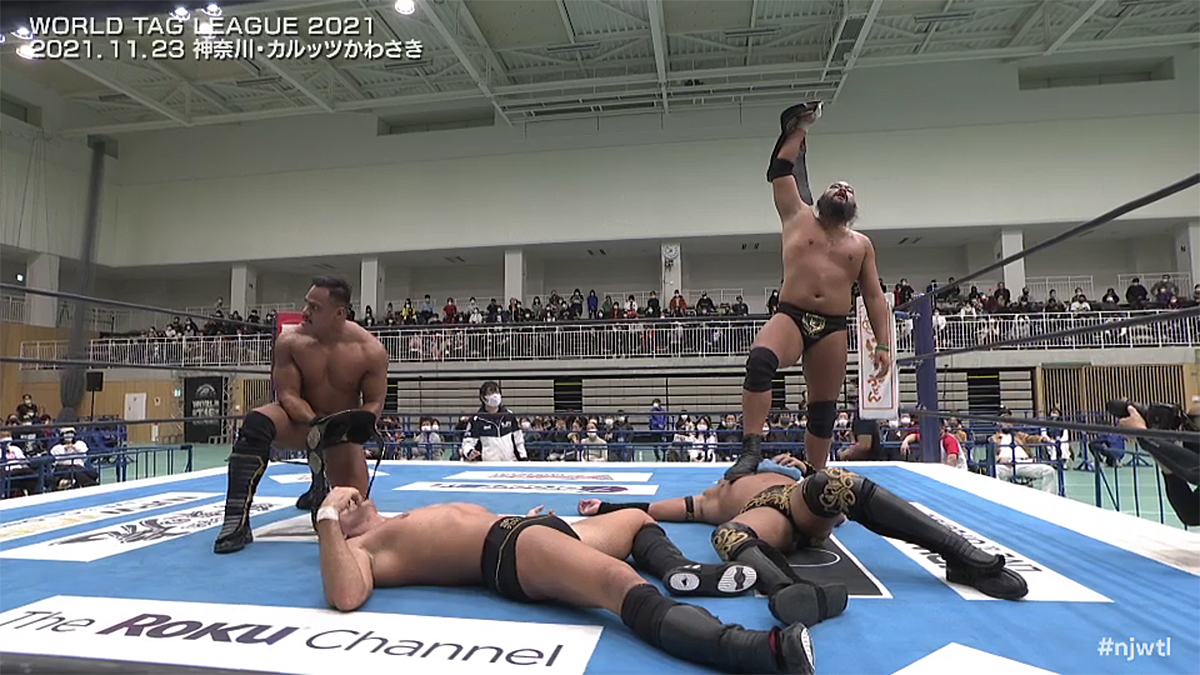 The United Empire rubs their win in the faces of the Dangerous Tekkers. Courtesy: NJPW.

Dick Togo carried Bullet Club / House of Torture’s gold down to the ring for them before their match against Satoshi Kojima and Hiroyoshi Tenzan began.

I wonder if Togo gets paid extra for that? The official warns Togo not to interfere. He throws up his hands and feigns innocence.

The House of Torture shenanigans begin right away as Evil and Yujiro attack after their Bullet Club salute. Kojima and Tenzan turn the tables though forcing Yujiro to roll out of the ring after a double shoulder tackle. Kojima and Tenzan double-team Evil until the official steps in.

House of Torture regains the advantage with Evil whipping Tenzan into an exposed turnbuckle. Gee, I wonder how that happened? As Yujiro distracts the official, Evil hits Tenzan with a steel chair on the floor with Togo’s assistance.

Evil strangles Tenzan with a t-shirt back in the ring as Kojima jaws with the official about House of Torture’s underhanded tactics.

House of Torture cuts off Tenzan from Kojima. A frustrated Kojima gives the official heck as House of Torture puts Tenzan in an abdominal stretch. Yujiro and Togo are assisting Evil from outside the ring.

Kojima hot tags in blistering every enemy in sight. Kojima lines up Yujiro and Evil in a corner for his machinegun chops. The crowd goes wild.

As Kojima climbs to the top rope two things happen. Togo pulls Kojima down and Evil grabs onto the official. Togo slams Kojima into the ringside barricade before rolling him back into the ring.

Kojima prepares to bounce off the ropes for his Lariat. He sees Togo with a steel chair on the floor and stops his momentum. The official admonishes Togo. Kojima bounces off the other ropes. Yujiro trips him up. Kojima hits his Koji Cutter but cannot make the cover. He tags in Tenzan instead.

Yujiro escapes the Anaconda Vice only to be slammed down to the canvass. Togo leaps up onto the apron to get the official’s attention before he can lay a count down. Evil shoves Tenzan into the official and punches him in the “lower abdomen”. Kojima comes to his partner’s aid driving Evil back. He gets punches in the nuts by Evil too. Yujiro hits him in the face with his cane. Yujiro does the same to Tenzan throwing the cane out of the ring when he is done. Yujiro pins Tenzan with his Pimp Juice DDT.

Nagata saves Tiger Mask from Hashi’s Butterfly Lock but he cannot stop him from being pinned by Hashi and Goto’s GYR finisher.

Honma misses a flying head butt. Owens pins him with a Package Piledriver.

The losses mount up for Taka and Suzuki. Taka is pinned by Tama’s Gun Stun. Suzuki tries to attack Loa and Tonga with a steel chair after the match. Suzuki takes his frustrations out on two Young Lions instead.