Rampage: Christian helps Jurassic Express even the odds versus the Elite 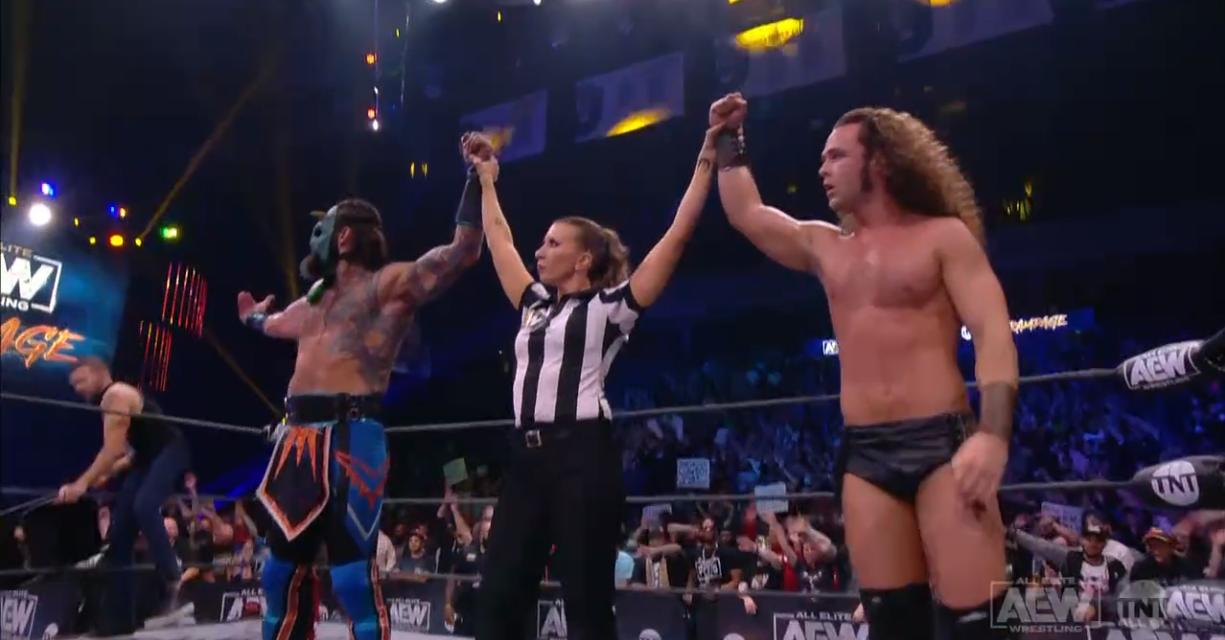 It’s Friday night and that means another episode of AEW Dynamite. The TBS Championship tournament continues, while Adam Cole tries to prove that the Elite can carry on without Kenny Omega. Onto the show.

The smaller Allin locks up with Gunn in the middle of the ring. Billy picks him up and sets him on the top turnbuckle. Darby gets tossed to the mat and just takes a seat. Gunn wants a test of strength, but Allin smacks him in the face. Gunn with a big back body drop and Allin scrambles to the floor. Gunn tosses Darby around the ring, but then stares down Sting. A drop kick sends Gunn to the mat, but Billy sidesteps the suicide dive. Gunn keeps the pressure on Allin, daring Sting to throw in the towel. Allin dodges a splash in the corner and hits a stunner. He follows with the Code Red and goes up top for the Coffin Drop. Darby can’t even get a one count. Allin hits a second Coffin Drop and gets the cover for the pin.

After the bell, Colton and Austin knock Sting to the floor and go after Allin. Sting hits the ring, only to have Gunn spear him.

Tony Schiavone is with QT Marshall, who is looking forward to beating up CM Punk in Chicago.

Scorpio Skye is not impressed that Jericho and the Inner Circle getting a victory over them at Full Gear.

Cargill tries to overpower Red Velvet early, but Velvet is able to use her speed to avoid trouble. Red gets caught on a cross body and is tossed across the ring with a fall away slam. Jade follows with a pump handle slam. Velvet floats over and connects with a leg lariat. Cargill goes to the floor but then catches Red with a palm strike as she attempted  suicide dive. Cargill choke slams Velvet onto the ring apron.

After a quick commercial, Jade is stomping Velvet into the corner. Red hits a back elbow in the corner and follows with a boot. She builds momentum with a sling blade and then a bulldog. She hits double knees to the back, but Cargill leap frogs a charge. She answers with a pump kick to the face and Red Velvet is down. Mark calls for the finisher, but Velvet counters into a pin and nearly gets the three count. Red with a spear, but still only scores a two count. Cargill avoids the Final Slice and counters with Jaded. She covers Red Velvet and gets the three count.

CM Punk tells Schiavone that it is the highest of stakes when he is in his hometown. He wants QT to show up with his bad attitude.

Mark Henry mediates the pre-match war of words between the Elite and Jurassic Express. Adam Cole vows to put an end to this charade. Jungle Boy is expecting interference tonight. Christian knows that the Elite will stack the odds in their favor.

Adam Cole and Bobby Fish vs. Jungle Boy and Luchasaurus

Cole and Jungle Boy lock up and fight into the corner. Jungle Boy with a springboard arm drag off the ropes, only to get kicked in the face. Fish tags in and hits an elbow drop. Jungle Boy connects with a drop kick and tags in the dinosaur. Luchasaurus with a big shot. He slams Fish to the mat and Jungle Boy hits a senton off the tag. Fish distracts the ref, allowing Cole to hit Jungle Boy with a cheap shot.

Fish with a sleeper hold. Jungle Boy fights his way out and hits a comeback lariat. Both men are down. Cole gets the tag, stopping Jungle Boy from making the tag. Jungle Boy ducks the knee strike and makes the tag. Luchasaurus hits back elbows on Cole and Fish in opposite corners. A double clothesline takes down both men. Fish and Cole miss on the double team. But Jurassic Express connects with their finisher, but Cole kicks out. Fish runs in and Jungle Boy lights him up with chops. Cole kicks Luchasaurs off the apron. Jungle Boy catches the knee strike and nearly locks in the Snare Trap. The two trade super kicks. Jungle Boy leaps off the ropes and into a super kick. Cole goes up top and goes for the Panama Sunrise. Jungle Boy counters and Luchasaurus catches Cole, dropping him with a power bomb. Jungle Boy with an elbow, but Fish is able to break up the pin. Fish pulls Cole into the corner and makes the tag. Fish with a running knee strike and a dragon screw. Fish charges Jungle Boy, who slams him into the turnbuckles with a reverse overhead suplex.

The Young Bucks walk down the ramp. Luchasaurus yells at them, until Christian runs down with a chair. He chases the Bucks and Adam Cle up the ramp. Fish tries an Okada roll, but Jungle Boy kicks out and locks in the Snare Trap. Fish taps out.

AEW Rampage rolls out another solid hour of wrestling. All three matches got time to breath, and while nobody brought the house down, no one disappointed either. Adam Cole and Jungle Boy can wrestle every week.