SmackDown sets up the final pieces for Survivor Series 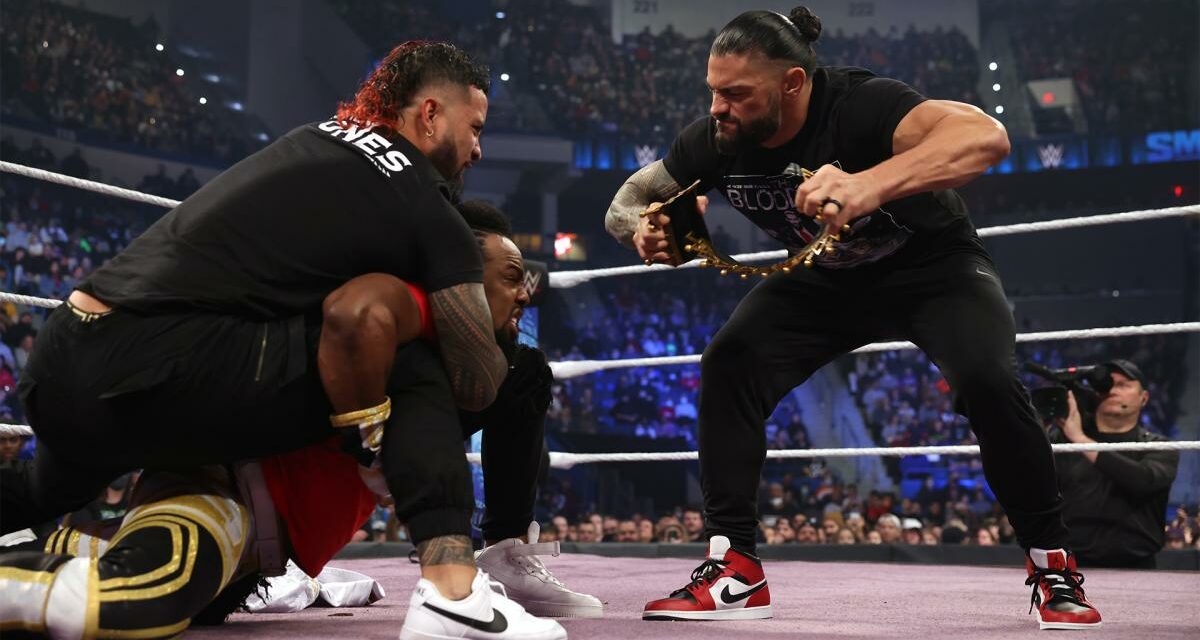 Never before has Survivor Series seemed so apt a title, as the intrigue going into the weekend is more about continued WWE roster cuts than it is the matches. Nevertheless, this is the final SmackDown before one of The Big Four pay-per-views, so let’s see if it can set the table.

Last week, SmackDown abandoned sense in its storytelling as Roman Reigns lost a match in which the stipulation should have forced him to kneel before Xavier Woods, lose his title, and also be banned from SmackDown for life (there was no mention of the stipulations being dependent on what kind of loss it was, and Reigns lost by disqualification). This week, they begin with more nonsense as Reigns now has ownership of the crown, the throne, the sceptre, and the robe — although he suggests he doesn’t need any of it and he, along with Jimmy and Jey Uso and in spite of Woods’ attempts to stop them, trash it all.

After the first break, Xavier Woods hobbles backstage and tells Kayla Braxton that he intends to fight Roman Reigns later tonight. He loosely paraphrases the maxim that Rome wasn’t built in a day — he changes it to “the Roman Empire”, and says that it will fall tonight.

At the bell, Cesaro and Mahal pair up, while Sheamus picks up Ricochet and beats him down in the corner. The Irishman drops Cesaro and then turns “The Bar” gesture into a thumbs-down. Mahal and Sheamus form a sort of partnership against Ricochet … which lasts a few seconds before Mahal tries a roll-up from behind. Soon after, Sheamus wriggles away from a Cesaro Swing only to take a top-rope dropkick from Ricochet instead.

After a break, both Cesaro and Sheamus are setting up superplexes, but only Sheamus succeeds as Ricochet brings Cesaro down with a hurricanrana. A standing shooting star-press on Sheamus follows and might have gotten Ricochet the win, but Mahal breaks it up. Cesaro steps in and swings Mahal around before getting him in the Sharpshooter, but Ricochet kicks Cesaro into releasing the hold. 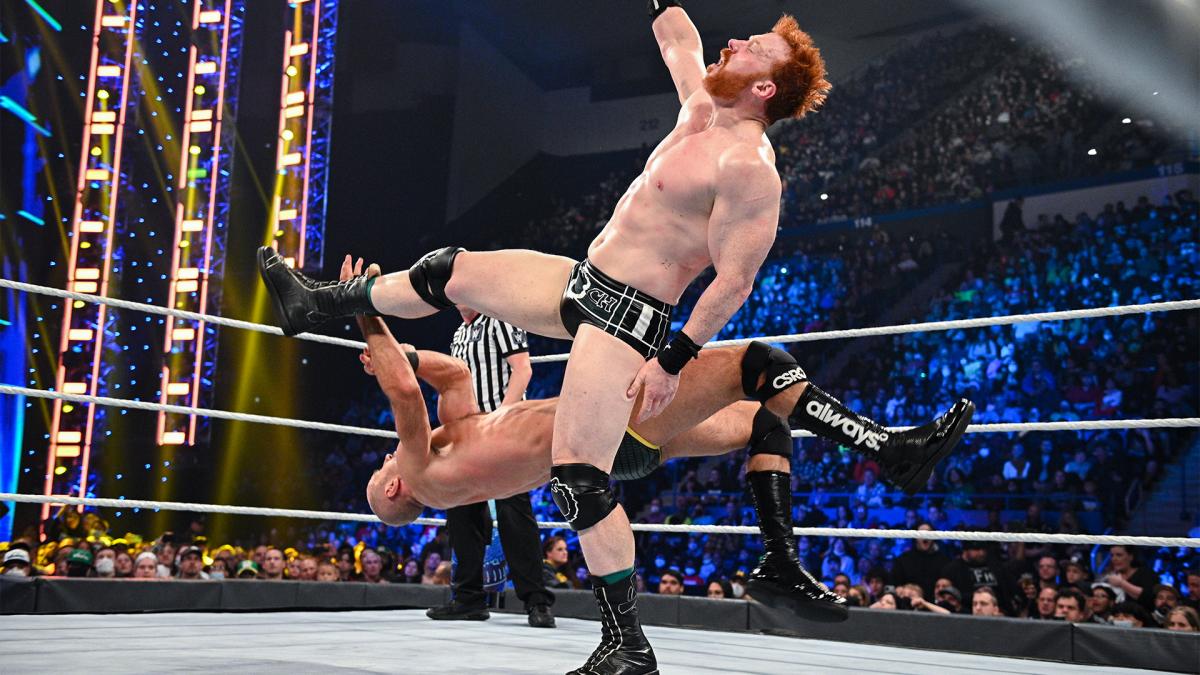 Sheamus may have just delivered a devastating Brogue Kick, but he looks more like Frankenstein’s monster learning to walk. Photo: WWE

A flurry of near-falls sees Ricochet land a 630 senton on Cesaro, Sheamus land a Brogue Kick on Ricochet, before Cesaro, with an assist from Ridge Holland who arrives for distraction, uses another Brogue Kick to get the win.

Backstage, Kayla Braxton talks to Jeff Hardy, who is pretty excited to team with Drew McIntyre and King Woods, and a little excited to team with Sheamus … but not really pumped up to have Happy Corbin on the squad. Corbin and Madcap Moss show up and tell a bad joke, before Adam Pearce pops in to make a match between Moss and Hardy for later tonight.

After the break, Sheamus and Ridge Holland celebrate their newfound partnership. We then get to watch a retrospective of the history behind Charlotte Flair and Becky Lynch, which you will certainly watch again before their match on Sunday.

Aliyah and Natalya pick up where they left off in last week’s match against one another, but double tags allow for Aliyah and Naomi to hit double Lou Thesz presses. A few moments later, Natalya is covering Naomi when the ref hits a very fast count for the quick end to the match. 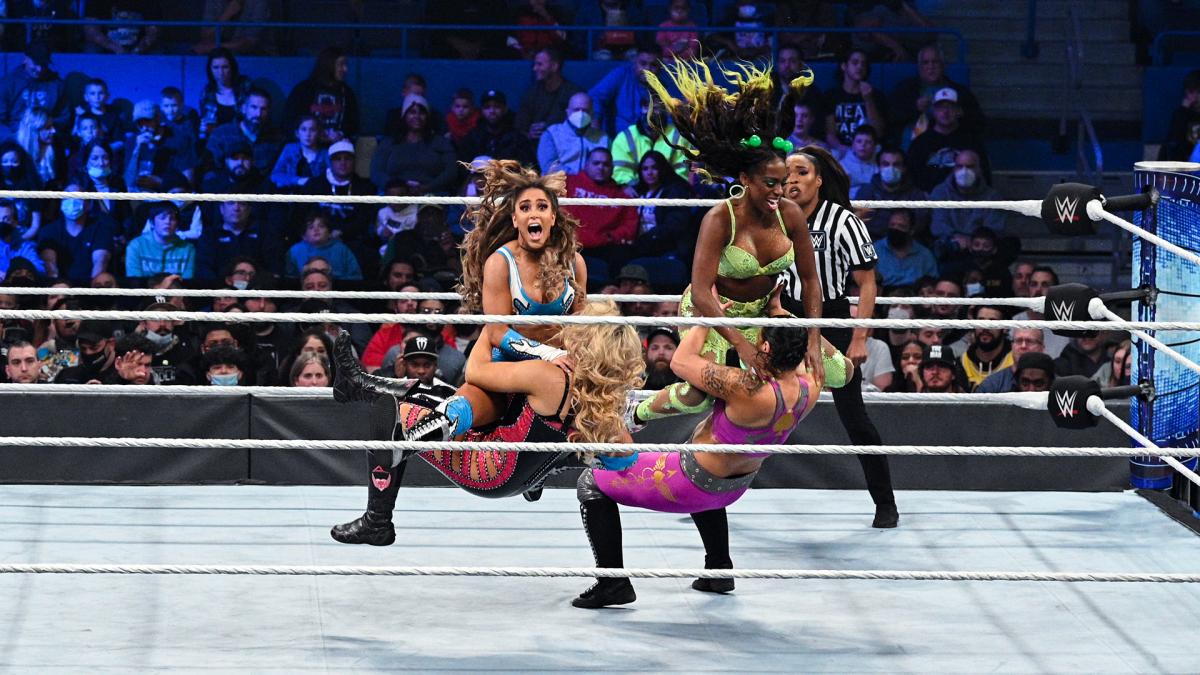 This makes two weeks in a row that Aliyah has made a joyous face when delivering a Lou Thesz Press. Hopefully that becomes a trademark. Photo: WWE

Backstage again, Zayn is talking to Sonya Deville, who is telling the dejected Zayn that she is going to have a 25-man battle royale in honour of the 25th anniversary of The Rock’s debut at Survivor Series, and she wants him to be in it … and win it. She also denies any involvement in the fast count to end the previous tag match.

Before the match begins, Hardy evens up the odds by summoning Drew McIntyre to be in his corner. Moss starts off hot, though, roughing Hardy up to the delight of Corbin. A few moments later, Hardy breaks out his greatest hits: a double leg drop, basement dropkick, and then, amusingly, Michael Cole says he was going for the Twist of Fate, but instead delivers the Twist of Fury — even though they’re the same move. Hardy lands a Swanton and that’s all she wrote.

Kayla Braxton is with Paul Heyman, seeking an answer from Heyman regarding Woods’ challenge. Heyman accepts.

As Cole and Pat McAfee push the narrative that Los Lotharios feel that they should have been named People Magazine’s Sexiest Men Alive, Garza superkicks Nakamura as he descends from the second rope, but a knee from the apron lands on Garza’s cheek while he’s out on the floor. Carrillo stops Nakamura from re-entering the ring, so Boogs runs around and dumps Carrillo. In the ring, Nakamura uses the Kinshasa for the quick win. 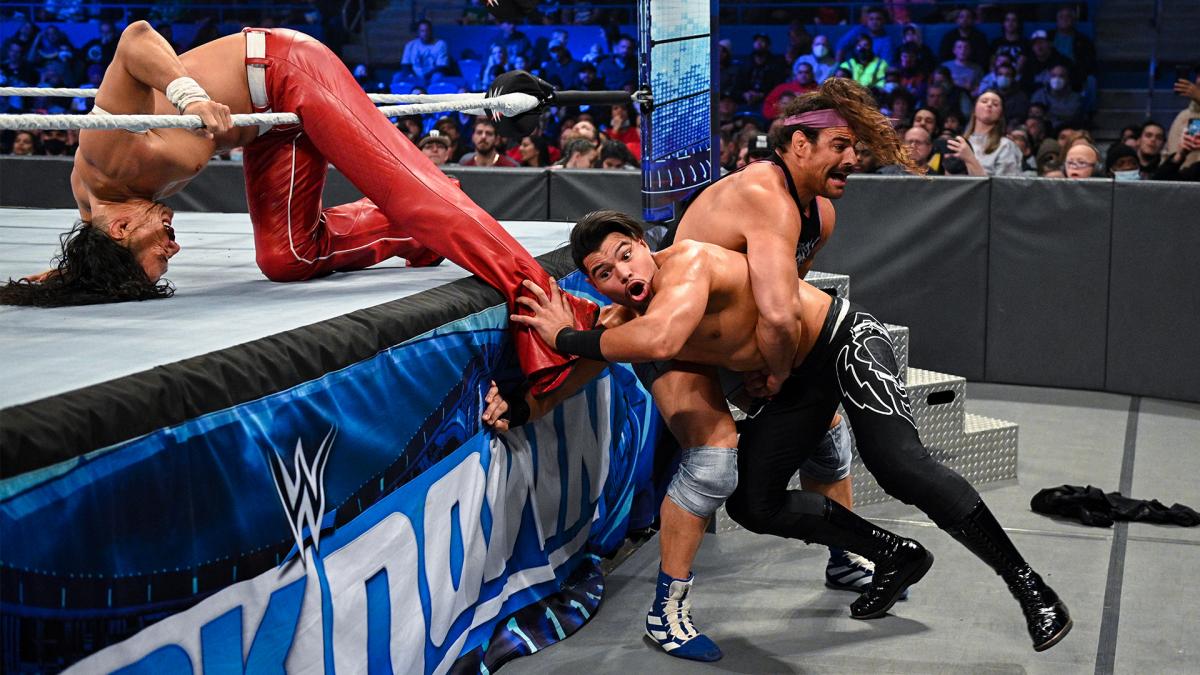 Shotzi and Sasha Banks are backstage with Sonya Deville, who tells them she expects them to shake hands when their match tonight is over. Judging by their annoyance with each other, it seems unlikely.

Cole has another job to start the match, which is to say that Sasha Banks is right in that nobody would be talking about Shotzi is it wasn’t for Banks. Huh. Meanwhile, Shotzi is overpowering Banks and shoving her around, who responds with Three Amigos and was heading for the Frog Splash before Shotzi rolls away. The fight goes to the floor where Shotzi traps Banks’ arm into the steel steps and kicks it repeatedly, but moments later they’re back in the ring with Banks showing little in the way of ill effects.

After the break, Shotzi is now focusing on Banks’s left arm, so that’s sensible. A meteora from the top rope gets Banks a two-count, but soon Shotzi is up and screaming in Banks’ face, again attacking her arm by running it into the ringpost. As Shotzi tries a fireman’s carry, Banks slides down and traps Shotzi in a cross-face using her leg instead of her bad arm for the win.

Sonya Deville walks out to see the handshake, which Banks offers and Shotzi accepts … before Banks gives her a Backstabber.

Backstage, Roman Reigns tells the Usos that he is taking on Woods all by himself tonight. Xia Li then gets a promo video which, to be honest, is probably bad news and means she’ll be released within a few weeks.

Kayla Braxton has a word with Toni Storm, who is excited to be on the SmackDown Survivor Series team, but she’s also looking past Sunday to starting a feud with Charlotte.  Flair slides in and tells Storm she can have a championship match after Survivor Series is done.

Out to the ring comes King Woods, and I’m worried that this whole bit with Reigns stealing his kingly stuff was just a way to explain why Woods no longer has a royal entrance. Earlier, it sounded like these two were having a match, but it’s now listed as a “confrontation”. Woods calls for Reigns to come to the ring, which he does with Paul Heyman.

Before he gets there, though, Heyman points behind them and they see Jimmy and Jey tossed out from behind the video screen at the hands of … Big E Langston. Out comes the WWE champ and he and Reigns immediately square off. Langston runs Reigns all around the outside area before bringing him into the ring where he and Woods stomp the champ into the mat.

The Usos try to intervene, but a Big Ending for both of them sends them out of the ring. Reigns is back in the fight, though, with a Superman Punch to Langston, but a near-spear turns into a near-Big Ending, as instead The Bloodline retreats back up the walkway to close the show.

This felt like an old-school final show before a PPV. Quick matches, some final tweaks to rivalries, and an ending that should make you want to see what happens on Sunday. That’s the least you should hope for, but at least it delivered.