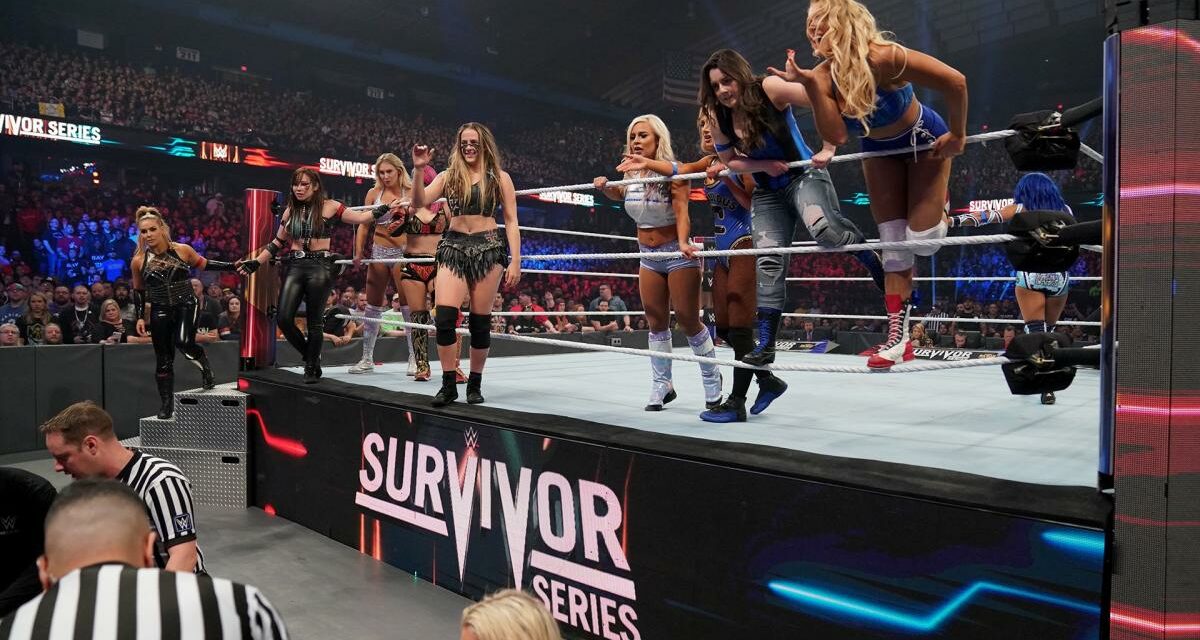 One of the tent pole pay-per-views the World Wrestling Federation/Entertainment offers is its Signature Survivor Series. This was a unique concept back in the day, where teams of wrestlers would get together and fans would see who would get together and get eliminated in the match, so only those combatants left standing would be recognized as the survivor or survivors of the night.

Lately, Survivor Series is taking on a whole ‘nother approach, as the company has decided to release more WWE superstars, including John Morrison, Isaiah “Swerve” Scott, and the entire Hit Row crew and Drake Maverick. For those of you keeping score, this makes almost 80 wrestlers that WWE has let go this year.

As for the reasons they were released, if you want to pay attention to the WWE’s Head of Talent Relations, John Laurinaitis, he cited the hoary line of “budget cuts.”

Two points to make: First, Laurinaitis’ title should be rebranded “Talent Releases”, as that’s all he is good for. I made the joke last time that he’s probably wearing a cloak and carrying a scythe like the Grim Reaper but now I’m thinking homeboy is taking that gimmick a little further than necessary. Hell, it wouldn’t surprise me if just for kicks, he went to corporate firms and went to some poor schmuck halfway in his shift that he was being fired and wished him well before delivering a big boot in his ass before he could pack up his headset.

Second, if he ever utter the words “Future Endeavors” or “Budget Cuts” about another wrestler, that should give the next person carte blanche to throat punch him so hard that his already hoarse voice is barely a whisper when saying anything like that again.

But why do the releases now, with the holidays and other pay-per-views around the corner? The reasons for the releases run the gamut from the disappointing (Morrison), to heartbreaking (Maverick, Tegan Nox), confusing (Tha Hit Row after being called up from NXT to the main roster) and WAY long overdue (Jaxson Ryker). There’s speculation that this is all to free up cash so WWE can move to the Peacock streaming service as part of a sale. If that is the case, I’m curious what kind of bargain basement price NBC Universal will scoop up the promotion to get it? Gods, even a vendor at your local flea market is wondering if this is even a product worth buying. I’ve seen those vendors, and they ain’t picky.

As I’m writing this, my editors reached and asked the Slam Wrestling bullpen who wanted to cover WWE Survivor Series. At this point, why even have the PPV on traditions grounds?  If WWE really wants to be crass about it, why not set the PPV up so that those wrestlers left remaining can fight for their jobs?

Why not, eh? We can call it “Survivor Series: Survival of the Future Endeavored.” If you can get the Charles Darwin Society involved to punch up that educational bit, you got something interesting.

I can see it now: On one side, it’ll see the team of RK-BRO and The Street Profits face off against Imperium and The Usos in a straight up tag elimination match and if any of them get pinned or submitted, then they are gone from the company and Laurinaitis will be right there at a table with a stack of pink slips, thanking them for their service.

Hell, let’s really whip this into a frenzy and get the various champs into a similar situation. Let’s make this a gauntlet-style match with the singles champs, like Intercontinental champion Shinsuke Nakamura, US champion Damion Priest, 24/7 champion Reggie, and WWE champion Big E and WWE Universal champion Roman Reigns fight with their titles on the line. Yes, let’s have them really slug it out, with the stipulation being that whoever loses is stripped of their title and also fired from the company. If we go in that direction, Reigns will be the only one holding all the belts. Let’s not lie.

You can do the same thing with the women title holders, too, and don’t tell me none of you aren’t anxious to see Charlotte Flair and Becky Lynch in that type of match where the stakes are raised to the roof! With the heat those two have had backstage, the only other thing that can match that type of intensity with be starved rabid hyenas fighting for that one rancid flank of scrap meat.

Well, that clinches it. As the rum quickly start to lose its hold on my mind, I begin to understand why I would never be on board as part of WWE’s booking team. Reading back what I just proposed would not only give people worried glances of my near-fragile sanity, but would have me joining those released throngs in the unemployment queue. Not even my attorney would be able to successfully defend the inane gibberish I just spouted (and there is a reason he has often suggested I remain quiet while he does the talking, but that is a subject which is thankfully protected by attorney-client privilege).

The fact of the matter is that all these talents were being hoarded by Vinnie Mac for far longer than the expiration date. The booking should have long ago used their “creativity” (and that word might as well be as verboten as “unionization”) to push these men and women to the upper cards and back, or just let them go sooner, rather than delay the false hope they would rise further above their ranks in a WWE ring.

Will those listed get back on their feet? Of course they will survive, and will continue to thrive in another wrestling ring (and please, don’t say “AEW should sign so-and-so.” I just had a few dozen mouthfuls of rum, and that will send me into a frenzy). All involved have demonstrated time and again, in WWE and out, that there is a ton of creativity and charisma that they can get fans invested in whatever they end up doing.

To those released, here’s hoping your futures are brighter, as you deserve better than just to survive.