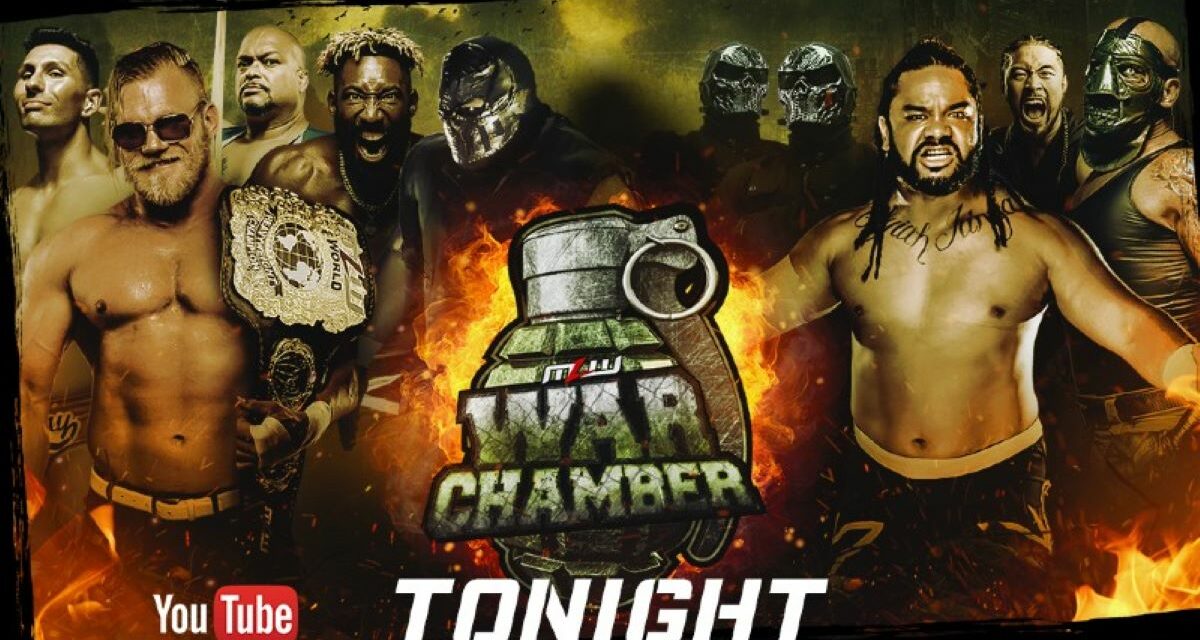 Tonight is the night, as Major League Wrestling presents their version of War Chamber.  The match promises to be a violent affair, as the evil faction Contra Unit faces off against MLW’s favored sons, led by Hammerstone, to fight for the soul of the company.  Who will come out on top?

As we head to the ECW Arena, your commentators Rich Bocchini and Joe Dobrowski note that matchmaker Cesar Duran comes out to address the MLW renegades.  He announces the final battle of War Chamber will have some surprises in store. Duran also has news after a meeting with MLW owner Court Bauer on a plan of aggressive expansion, as he’ll be taking MLW to Mexico next month.  He promises pit fighting, lucha libre, and all sorts of sadistic pleasures.  Since it lines up with his work with The Crash next month, I’m sure that it’s on brand.  Here’s hoping there’s no border lockdown.

We get a vignette that highlights the violence between 5150 and the feud with Los Parks, and they want the tag straps.  I’d love to see that happen sooner than later.

Now, onto a promo with the Black Hand of Contra Unit’s Mads Krügger, as he muffles/mumble-talks his way into a promo for War Chamber, and …yeah folks.  I’m sorry.  I can’t do this.

(Author’s Annoyed Rant:  When I don’t have to write/recap for SLAM! Wrestling, I work a regular job, where I take calls from people that do the same thing Krügger is doing, which is mumble their way to what they are requesting, and I.  Can’t.  Understand.  One! Bloody!! Word!!!

That lazy type of speaking drives me absolutely insane!  How hard is it to cut the mouth piece away so I can understand what in the hell he is trying to say?!!  Either get someone to talk for you or, in the words of the philosopher, Chris Jericho:  Will you please Shut the Hell Up!)

As we get promos for the members of War Chamber prepping for the match, there’s news about MLW Fusion Thanksgiving that will have a matchup for the vacant MLW Openweight Championship featuring Alex Shelley, Myron Reed, Zenshi, Alex Kane, and a wild card, plus the second Opera Cup semi-final matchup with TJP versus Calvin Tankman, who will face Davey Richards in the finals.  That should whet the appetites of a few of you.

Ring Announce Tim Barr goes over the rules of tonight’s matchup, which are:

Entering first into the #WarChamber it's the former World Champion. The "Samoan Werewolf" Jacob Fatu!

As Fatu enters the Chamber (which is really just a steel cage match with a fancy name and barb wire on top, but, hey…you buy the bit, you buy the premise), he awaits the next combatant and Cesar Duran come out with…

Before I can say “What in the name of Boyle Heights is happening?” out comes the monster Matanza in Full Mask and Overalls, which he strips off to become…

There is a nice pop for “Matanza” by the Philly faithful, and for the next five minutes, this one-on-one goes right to the land of the big uglies, as no quarter is given between these agile big men.  Interestingly, it’s all Matanza/Cobb with a beautiful standing dropkick to Fatu.  That leads to a countdown, as the five minutes are up and we get…

The 2nd member of CONTRA to enter the #WarChamber is Sentai Death Squad member #1.

From here on out, I’m abbreviating this to SDSM1 for the sake of my typing fingers, and homeboy is a ripped dude wearing a balaclava mask that levels Cobb, leading to …

Ads for MLW coming to Dallas, TX (for real this time) in January.  Get yer tickets now

Meanwhile, back at the War Chamber, SDSM1 is just putting the boots to Jeff Cobb, but the clock starts to countdown to…

At this point, I’m just gonna refer to Vega as the Boricua Sandman, as he enters the Chamber and lays into Fatu and SDSM with Kendo stick hits.

.@SavioVega immediately taking out CONTRA members with a kendo stick!

Honestly, Vega is a Budweiser and a cigarette away from completing the image.  As the odds get evened, the clock counts down again to…

The 3rd member of CONTRA to enter the #WarChamber is @ikuro_kwon

The Pit Fighter of Contra Unit gets in the Chamber and delivers swift kicks to Vega and Cobb.  As all three members of Contra Unit start to work over the Hammerheads, the clock counts down once again, and now it’s…

Holliday enters to …wait, is that…cheers?

Huh.  Ok, then.  I’ll roll with it.  Anyways, Holliday gets in hits a spine buster to Kwon, and then a belly to back suplex to SDSM1.  Fatu stops momentum with a hard open palm strike and sends Holliday to the corner.  Fatu goes up top for a superplex, but Holliday reverses to avalanche 2008 neckbreaker.

As Fatu and Holliday are left winded, the clock counts down to…

The 4th member of CONTRA to enter the #WarChamber is Sentai Death Squad Member #2!

(Author’s Childish Musing:  Maybe it’s me, but the Sentai Death Squad members are giving me some serious Cobra vibes from all those years I watched “G.I.Joe” as a kid, and thus is the reason I know these guys are just war bodies for the eventual hurting)

As SDSM2 enters (looking a little bigger…almost Heavy, if you will, Budd), he’s not as cut as SDSM1, and he turns the tide in Contra Unit’s favor for…

Ads (While we’re on this break, Can someone point me to some vintage G.I. Joe figures?)

We return back to the Chamber, and the clock counts down for…

Oh, yes, renegades.  The Judge hath cometh to layeth the Verdict down on their candy asses.

Nduka gets a delayed vertical suplex to SDSM1, and SDSM2 is tossed about to the Chamber walls.  Fatu slaps Nduka, and they go toe to toe as the clock counts down to…

Krügger mumbles some instructions to SDSM3, and he stands watch as Krügger gets in the ring, and it’s a big man’s paradise as Nduka and Krügger square off, but neither man can get the advantage over the other.  Kwon gets a spinning kick to the back of Nduka’s neck, and he returns the receipt with a spinebuster to Kwon, but Krügger goes up top and delivers with a flying clothesline to knock down The Judge.  Now Contra Unit is on fire, as Fatu nails a vicious hip attack to Holliday in the corner and the clock finally counts down to the final entrant…

The 5th and final member of Team Hammerheads to enter the #WarChamber is The World Heavyweight Champion "YBH" @alexhammerstone.

The Sentai Death Squad tries to stop Your Boy Hammer, but he mows through them like the Cobra figures they are, and gets in the ring and goes full Ultimate Warrior, shaking the ropes, as Hammerstone gets Krügger and delivers the Nightmare Pendulum which leads to…

Back to the Chamber, as Hammer goes for a bicycle kick to Fatu, but it’s scouted by the Samoan Werewolf, and he gets his bad leg that was injured in their title match in an ankle lock.  Your Boy Hammer writhes in pain, but turns around and kicks off Fatu, and Holliday sends Fatu crashing to Krügger, and tensions flare between the Contra Unit members.

Fatu goes up top for a twisting Moonsault to Hammerstone, but hits Krügger instead.  Now Kwon goes behind Hammerstone with a choke hold, but he gets tossed off and Your Boy Hammer channels Lex Luger and gets Kwon in the torture rack and he has no choice but to submit.

Your Winners of War Chamber via Submission:  The Hammerheads

The Hammerheads walk up the ramp victorious, but the camera pans to a dejected Jacob Fatu, and then Krügger decides that is a good time to get in his grill. Fatu say “nah bro!”, but Krügger is saying something that we can’t understand. However, a pie face by Krügger to Fatu’s face is an international sign of disrespect, and that gets the ire and attention of Fatu, and it’s a Contra Unit implosion. Fatu has completely lost it, taking down Kwon and Krügger, and swinging a steel chair to the Sentai Death Squad Members foolish enough to come out to stop the Samoan Werewolf. Fans chant for the new Fatu, as Krügger continues to brawl, as security swarms out and tries in vain to restore order.

We then go to Duran’s office with Karla Perez, now sporting short hair. Over drinks, Karla wants to see what El Jefe has in mind for the ring, and Duran says it’s more than a temple…but a cathedral of violence.  As we look over the plans, which honestly resemble a regular wrestling ring, the show goes to black.

A really good solid match, and the extra 1/4 star is because of the implosion by Contra Unit at the hands of Jacob Fatu.  It’ll be interesting how the Samoan Werewolf finds new life away from the faction.

But seriously, Mads ol’ buddy, cut of part of the mask so we can understand you speaking.  It worked for Kane.  Just saying.

In any case,  if you need to see something more violent than your Thanksgiving “political debate” with family, I’ll see you in Seven.