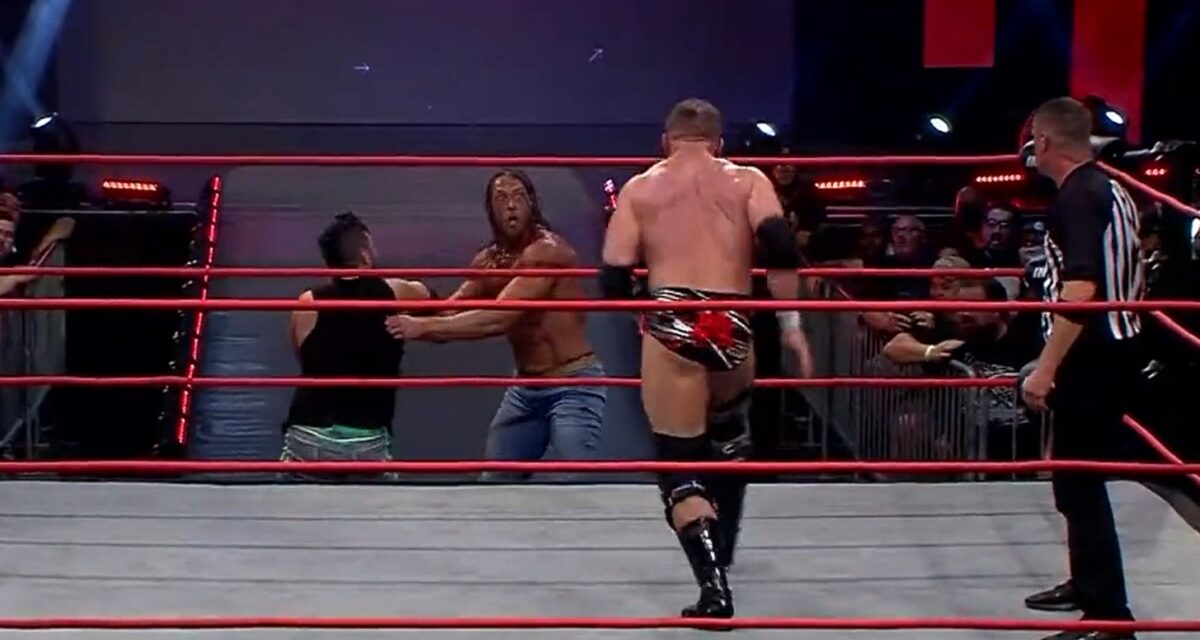 With the Turning Point special coming up next weekend, it’s perhaps fitting that W. Morrissey turned babyface during the main event of Thursday night’s episode of Impact Wrestling. Until you realize that he didn’t. But the way he was booked in his Triple Threat match against Eddie Edwards and Matt Cardona, you would be forgiven for interpreting as such. It was a weird ending to a show that was fine, but at times felt like it was just there.

The winning team will become the number one contenders for the Tag Team Championship held by the Good Brothers. This one was fairly evenly contested, with the advantage switching back and forth a couple of times. Bey and El Phantasmo did some neat double-team combos, which looked good, particularly for a relatively new pairing. They did some typical Bullet Club too cool for school silliness at one point, when Finlay locked on a Double Purple Nerple on Juice, ending what had been a good-looking slugfest. In the end, the ref lost control of things, and when Juice had Bey down for the count, El Phantasmo ran in and Superkicked Juice, knocking him silly. He then prevented Finlay from coming in for the save, and Bey got the cover.

This was a pretty standard tag match – serviceable but nothing to write home about. This three-way feud is starting to spin its wheels now, so hopefully the upcoming title match will lead to a shift in some way.

Gia Miller interviewed Impact Executive Vice-President Scott D’Amore to find out why Josh Alexander isn’t in tonight’s main event – a Triple Threat match between W. Morrissey, Eddie Edwards, and Matt Cardona – to determine the number one contender to the World Championship, currently held by Moose. D’Amore was just starting to answer the question when Josh Alexander walked up to him. Josh expressed his frustration that he wasn’t the number one contender. D’Amore said that he could tell that Minoru Suzuki was in Josh’s head, and he wants to see Josh focused 100% on the title if he competes for it. So to exorcise the demon, he was putting Josh in a match against Suzuki next week.

A Brian Myers “How to be a Professional” vignette aired. Myers was chastising The Learning Tree (Zicky Dice and VSK) for losing last week. They tried some comedy. And then Myers challenged his former student Sam Beale to a match next week.

Josh Alexander was shown in the back watching this one on TV. He didn’t have to watch for too long. Within a minute, Suzuki hit a Gotch Piledriver and got the squash win.

To say anything else about this match would make it longer to read than the match lasted.

Gia Miller interviewed Moose, the World Heavyweight Champion. He said he doesn’t care who wins the Triple Threat match tonight, because no matter who it was, he was ready to beat them.

Before this one really got started, the Knockouts Tag Team Champions, the Iinspiration came out and they took seats on the entrance ramp. It was them who had requested the Bridesmaids take on Decay, who will be challenging the Iinspiration for the belts. This was a good hard-hitting match while it lasted. Decay hit the hardest, though, and after a double-team combo, they got the relatively easy win.

After the match The Iinspiration came to the ring, and while they jawed at Decay, they kept their distance, clearly not interested in a physical confrontation.

This was fine. The Bridesmaids gimmicks without Su Yung are kind of meaningless, so maybe it’s time to repackage Lee and Lauren into something more relevant? Besides, Decay has the supernatural/gothic/horror thing going on already, so does anyone need more?

Heath and Rhino cut a promo. Heath said that after Rhino left VBD and reunited with him, they thought the VBD feud was over. That is, until VBD attacked them last week. Rhino said the two of them will purge the negativity that VBD instilled in him when they fight at Turning Point, the Impact Plus special taking place on November 20th. Strong, serious stuff here by both guys.

Chris Sabin cut a promo against Ace Austin, and challenged him to a match at Turning Point.

Martinez impressed early on with a lengthy Delayed Vertical Suplex. She tried to follow up with a Crucifix Bomb, but Rayne escaped and then went after Mercedes’ legs to ground her and keep her down. After a while, Martinez was able to escape a submission attempt and nail Rayne with a big running Knee Life. She dodged a move by Rayne and then rolled Rayne up for the pin.

After the match, Rayne attacked Martinez, and they fought it out in the centre of the ring, Martinez then hit a Cutter, and then blasted Martinez with a chair shot. Rayne was going to inflict more punishment with the chair, but Knockouts Champion Micki James – who is defending the title against Martinez at Turning Point – ran down to the ring, and ejected Mayne. Mickie checked on Martinez, but Martinez was apparently playing possum, as she sprung back up and hit James with a surprise Death Valley Driver.

.@MickieJames saves @RealMMartinez but NOTHING will stand between Mercedes and the Knockouts World Championship. #IMPACTonAXSTV pic.twitter.com/LPhN5LXYPu

The match was fine, but really it was only window dressing for the post-match interaction between James and Madison.

Steve Maclin cut a promo. He said that he has never been pinned or submitted since coming to Impact, and so he wanted a shot at Trey Miguel’s X-Division Championship. Miguel wasn’t too thrilled about being called out, so walked up to Heath and they started arguing and butting heads. Before it got physical, Scott D’Amore walked up to them. Miguel told Scott to add Maclin into his match against Laredo Kid at Turning Point. D’Amore said he wouldn’t do that unless Maclin beat Laredo Kid in a one-on-one match next week. Maclin has great intensity, and really should be in the upper tier of this company.

Sam Beale, Rich Swann, and Willie Mack cut a promo. Sam accepted Brian Myers’ challenge for a match next week. Beale said that studying under Myers as the original Learning Tree student allowed him to study Myer’s technique, so he is ready to face Myers next week. And he would go at it alone – i.e. Swann and Mack wouldn’t have to be in his corner next week.

Rocky outwrestled Raju early on, and was in firm control after hitting Raju with a dive off the ring steps onto the floor. But when we got back from commercials, Raju had the edge, and he was battering Romero in the ring. Even Singh got in some cheap shots from the floor. But eventually Romero was able to counter a spot and hit a big DDT, turning things around. Raju tried to re-gain the edge, but Romero avoided a top rope attack and locked on a submission win. So Romero took Singh out of the equation with a Flying Dive, and then hit a Running Sliced Bread on Raju for a near-fall. Romero went for another Sliced Bread, but Rohit countered it and Kneed Romero in the face. He followed that up with a Drive By to get what has to be seen as an upset pinfall victory.

This was easily the best match of the night so far.

Johnny Swinger and Hernandez cut a promo. Hernandez said that he wanted to help Swinger take out The Demon, so he got them a match against The Demon and Decay (Crazzy Steve and Black Taurus) next week. Swinger pointed out they had a 3-on-2 disadvantage and suggested an alternative stipulation. But then John E. Bravo walked in and said he would help them… and introduced their partner for that match, Fallah Bahh. Hernandez and Swinger weren’t wild about this, but accepted it anyway.

Chelsea Green cut a promo and said that she will face Alisha Edwards, Matthew Rehwoldt, and Jake Something in a Fatal Four-way match to become the number one contender to the Digital Media Championship, currently held by Jordynne Grace. That will be online next week.

The commentators D’Lo Brown and Matt Striker announced that Deonna Purrazzo would be returning next week for a sit-down interview with Gia Miller.

The winner of this one will be the number one contender to Moose’s World Championship. There was a really backwards weird dynamic here, as the heel, W. Morrissey, was actually outnumbered in this one. He was aggressive early on, and hit both Cardona and Edwards with some hard shots and dominated them both. Edwards and Cardona then teamed up, but Morrissey hit a Double Chokeslam to go into the ad break.

His dominance continued after the break, and he battered them both with huge power moves. He was beating them up so badly, the crowd eventually started cheering for him.

Eventually, the faces – who were made to look completely hapless by this point – resorted to double-teaming against Morrissey, including joining forces to hit him with a Duo Vertical Suplex, and then a two-pronged dive attack to Morrissey on the floor, which put him down.

With Morrissey taken out of the equation, it was down to Cardona and Edwards, and after Eddie avoided a top rope move by Cardona, he hit the Boston Knee Party to get the win.

Moose, who was watching the entire match from the balcony, got up and left his seat after Eddie won.

This was completely bass-ackwards, as Morrissey was booked as a mega babyface despite not being one. Eddie winning seems like a step backwards, as he and Moose aren’t exactly a fresh match-up, whereas Morrissey versus Moose could be much more interesting.

While a couple of the matches this week were fine, the bizarre booking of the main event – and ultimately the wrong person winning – made this show a bit of a head-scratcher and took away from the overall rating. While the show did cement some plans for Turning Point, and set up what some will consider a dream match for next week in Alexander vs. Suzuki, very little clicked.