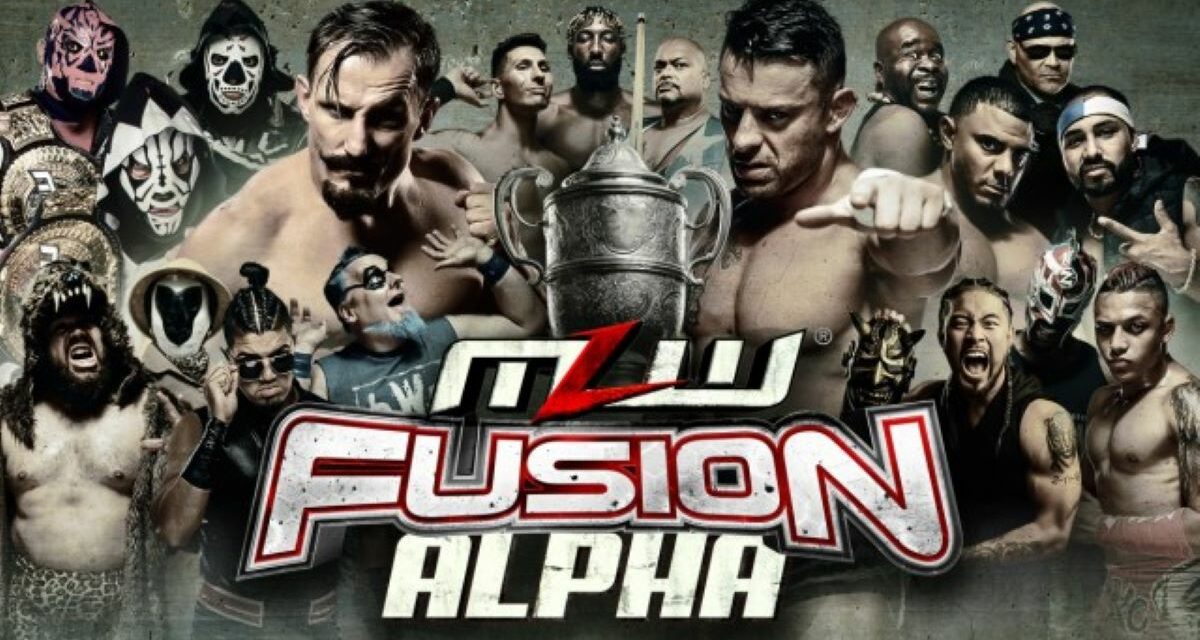 Tonight’s main event proves to be a fantastic match between two combatants of the sport of professional wrestling in Bobby Fish and Davey Richards.  As they vie for a chance to claim The Opera Cup, this is a pick ‘em to see who will be in the finals, as we head to Philadelphia, PA in the ECW Arena. Rich Bocchini and Joe Dobrowski have the call.

The show starts with a cold open with Emilio Sparks channeling his inner dirt sheet reporter, that to get quotes from EJ Nduka, Hammerstone, and Richard Holliday With no success. As the three men talk amongst themselves, Cesar Duran stops by and wonders why they haven’t taken up his offers for help.  Your Boy Hammer bluntly states that they don’t trust him, but Duran assures he has a man that can help, holding up a key hanging around his neck. Hmmm, I wonder who he has in mind?

For now, we’ll head to the ring for the First Match of the night, and it’s a…

We get word that Jacob Fatu is in back and he is still fired up that he lost the title.  The match is supposed to be a trios match, but only Hijo De L.A. Park and L.A. Park, Jr, come out.  No sign of Papa Park, but that doesn’t matter, as the match just devolves into a Pier four brawl, and 5150 works over Los Parks.  The 5150 music plays again, and… Homicide appears to add to the fun.  Bocchini talks about how L.A. Park laid out earlier before the match…but here comes the Chairman himself, and *Now* it’s a trios match.  We get tres tope suicidas (that’s “three suicide dives” for those of you that don’t speak German) from Los Parks, and it’s still utter pandemonium in the ECW Arena.

In the ring Hijo has a wood plank in the corner and works over Boogie, and then delivers a German suplex, followed by a Code Red for a two count.  Boogie is having none of that, and powerbombs Hijo to the plank.

L.A. Park comes in and whacks Boogie in the head with the chair.  The ref calls the match, and it’s a…

No Contest by Double Disqualification

But No one there cares, as both teams keep up the violence, and it’s just absolute chaos in and out of the ring.

We get another teaser for “Big Beef” Gnarls Garvin, and I suddenly want a Five Guys hamburger.  Anyone else?

Onto your regularly scheduled Promo from the Contra Unit Commander himself, Josef Samael. He says that Philadelphia is the city of brotherly love, but really it’s a city that favors losers. He’s not sweating the Hammerheads, as hell in the form of Contra Unit will demolish them all. Hail Contra.

More footage of the brawl between Los Parks and 515 spilling to the back of the arena, and I think Rivera snatches mask of Hijo de L.A. Park.  Papa Park knows this is no bueno and says in Spanish that they’ll get even, cabrones.

Chaos is ensuing backstage as Los Parks and 5150 continue to brawl it out.#MLWFusion
▶️https://t.co/Dq1oekJibG pic.twitter.com/oZ2OGdveE8

Now for something different we have, for reasons that escape me, a…

Seriously, who in the name of WWE Smackdown GM Teddy Long sanctioned this match?  Covering this requires some major focus, so here’s the big highlights from the match:

Kwon eliminated Warhorse with a powerbomb lungblower finisher for the pin.  Then Kwon tagged in King Mo, and EJ Nduka eliminated Mo with a spinebuster, then he eliminates Kevin Ku with a spinning powerbomb, and that leads to…

Ads (And this is brought to you by the Judge Cocktail.)

Back to the action, Nduka tags in Holliday, and KC Navarro is able to school Holliday on the mat.  Holiday then tags Zenshi for a regular spot fest of moves that got spotty in some places.

Navarro then tags Beastman, and he launches Zenshi with a fallaway slam and a cannonball and he is eliminated.  Now Vega is in with a kendo stick, and Beastman evens things up with a bone. Vega swings away and follows with a spinning heel kick, but the ref takes the cane away, and a clothesline and a big splash by Beastman eliminates Vega.

Now it’s Philly favorite son, The Blue Meanie, and it’s a “sumo wrestling” match, and neither man gets the advantage.  Meanie goes in the corner, and Kim Chee grabs his leg and trips Meanie.  A big splash by Beastman eliminates Meanie.  Now, Nduka comes back and hits a spinebuster to Beastman and Kimchee to eliminate both, even though Kim Chee wasn’t part of the match, but whatever.

Gino Medina comes in, and Holliday gets tagged in, just in time to get in with “I Quit The Dynasty/You’re Fired” quips by both men. They keep fighting to the outside, and brawl up the ramp.  Holliday gets back to the ring, and Kwon superkicks Holliday, and ref counts him out and he is eliminated.  Now it’s only Nduka in, and Navarro, Medina, and Kwon put the boots to The Judge, but Nduka powers out.  Nduka eliminates Medina and Navarro in short order, and then gets Kwon in The Verdict (gorilla press to a spinebuster) for the pin.

Cesar Duran is with Willow Nightingale. She admires the wild matches Duran books, and wants to take the upcoming featherweight title. Duran is pleased by this, but then his Azteca Stooge tells him about Fatu wanting to see him in his office, and Duran excuses himself.

We get a promo for a Certified G, and a Bonaire Stud. And you can’t teach that (but here’s hoping nZo kept the copyrights).

Back to the office Fatu tears Duran’s office in half, and demands a rematch for the MLW Heavyweight title. Duran agrees and wants to see the rematch, but since Samael is the gatekeeper for any matches with Fatu, Duran calmly says Samael hasn’t approved it. Fatu looks perplexed, and doesn’t buy it.  But he wants to talk to Samael about it.  That should be an interesting conversation.

We then head to the Main Event, but let’s go to the Tale of the Tape for both these grapplers.

Now, on we go to the first of the…

As both men circle each other, Fish offers a fist bump, and Richards obliges.  With that, each man begins testing the waters with kicks, just as a feeling out process.  Fish goes for wrist control, but Richards rolls out and delivers a seated kick to his shoulder, and Fish goes out to collect his thoughts.

Back to a lockup and Richards sends Fish to the outside of the ring.   Richards goes out to punt, but Fish takes his feet out from under him, making Richards crash on the ring apron.  From there, Fish kicks away and hits Richard knee hard.  Back in the ring, Richards is hobbled, as Fish connects with a running elbow, and goes back outside to do more damage to The American Wolf.  Now Fish wears down Richards further with blows to the midsection, and Richards counters with a high knee and it leads to…

Ads (brought to you by a Red Swedish Fish cocktail)

Richards gets Fish in an armbar, and utilizes joint manipulation.  From there, Richards uses the ring ropes to further damage the left arm of Fish.  Then Richards gets Fish in a reverse armbar to transition into La Magistral for a pin, but Fish’s legs get to the ropes to break the count.  Now Richards gets a body scissors to Fish’s abdomen.  Fish manages to get out of the hold, and then he and Richards slug it out, but Fish goes back to attacking the bad knee.

Fish then gets a running knee to Richards in corner, and then picks up The American Wolf to tackle him in the corner, and follows with a vicious dragonscrew leg whip. Fish goes for a pin attempt for a two count.  Fish attempts a springboard senton, but it’s scouted and Richards gets his knees up, and Fish is in pain.  Richards goes for a punt, but Fish counters with a heel hook.  Richards almost submits, but reverses the submission to a scorpion deathlock, and Fish transitions to a pin for two count.  From there, it becomes a kick fest, and Fish is caught in an ankle lock by Richards, but Fish kicks him off and Richards nails the punt.

He hits the brain buster and Richards covers Fish, who kicks out at two, but Richards hangs on and goes back to the ankle lock, and now a leg scissors and Fish has no choice but to tap out.

Your Winner, and Finalist in The Opera Cup:  Davey Richards

After the match, Richards goes to Fish, and offers hand, and a handshake followed by a hug for both these grapplers, as the fans clap in appreciation for this well-fought bout.

Backstage Alicia Atout is with Your Boy Hammer, EJ Nduka, and Richard Holliday, and she asks about how Savio Vega will work on the team heading to War Chamber, despite issues with Holliday. Holliday scoffs at the idea, and Nduka wonders about the key Duran had earlier, and knows it’s meant for his brother.  All of a sudden, the Azteca Stooge whispers to Atout that Holliday will be given a chance at the MLW Heavyweight title, and Holliday and Hammer goes over how it will play out and the drama that would ensue (which sounds a lot like any title match in WWE, but I digress), before Hammer says that won’t happen because he ain’t playing games, not with War Chamber around the corner.

We then get a promo for War Chamber next week, as the show fades to black.

The rating is for the main event itself, as Richards and Fish demonstrate why they are the best in the sport of professional wrestling.  The match could have gone on longer, and should have, if the 12-Man Tag match was removed.  It was okay but didn’t add any value.  the Feud with Los Parks and 5150 adds with their crazy brawl, and will culminate into the eventual tag match.

As for next week, with War Chamber, just come for the match, and stay for the violence.  Until then, see you in seven!