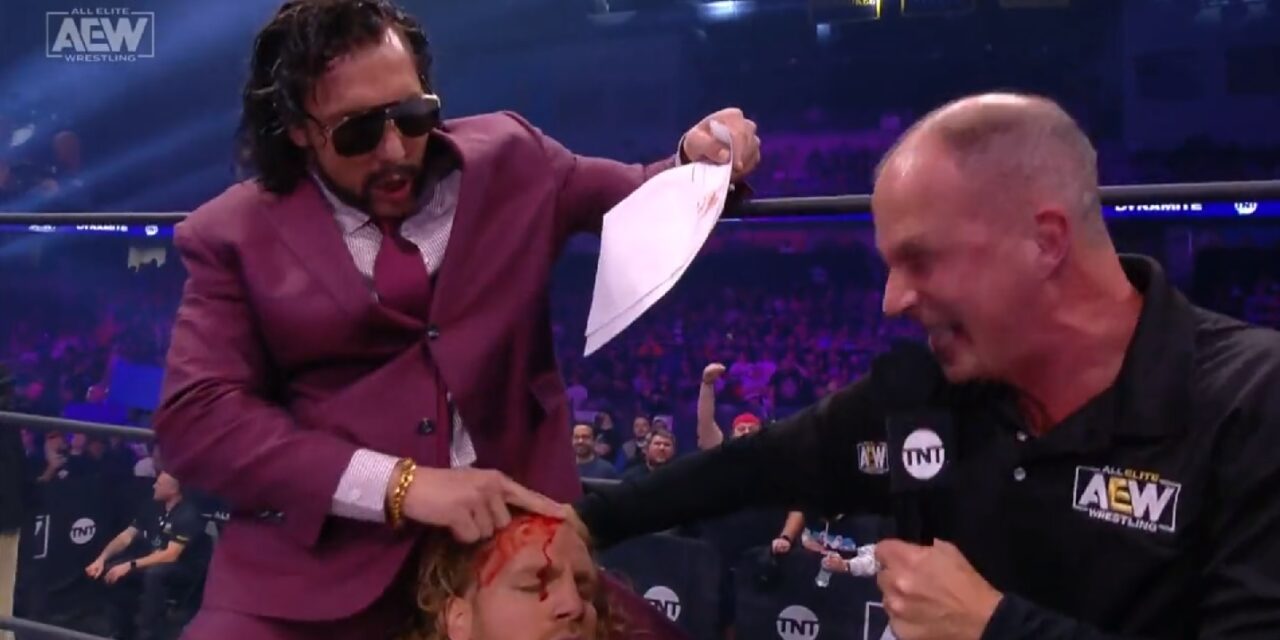 It’s almost pay-per-view time again in AEW land. That’s no small deal since they only come every few months, essentially one per season, if you will. Fall means Full Gear, which takes pace this Saturday, Nov. 13. The final pieces of the card should slide into place during Dynamite, which apparently will be kicking off with a visitor from Japan. Away we go to TNT to see what transpires.

Ha, Orange Cassidy and the Best Friends unveil a Chaos banner behind Romero as he makes his entrance, with the announcers mentioning that all of them were invited to join Chaos by the Rainmaker himself, Kazuchika Okada. And hey, Wikipedia has them listed as members now so it must be official. Danielson gives Rocky a taste of his own medicine with the Romero Special, but he knows how to escape it as well. Matt Hardy is in the front row of the crowd as well, giving Cassidy a mock half-thumbs up. Lots of discussion among the announcers about the Forbidden Door, which … is it forbidden if people are able to go through it this often? Better make sure I emphasize I’m joking so no one gets upset. Romero and Danielson trade submission attempts multiple times, with Danielson eventually improvising into a Tequila Sunrise and getting Rocky to tap.

Tony Schiavone heads to the ring to have a chat with the Inner Circle, but alas, the Men of the Year and American Top Team have other ideas, assaulting the group on the ramp. I have to hand it to AEW, they have done an excellent job building up Dan Lambert and ATT as people the fans love to boo, and the Men of the Year are getting a rub from it as well. Lambert powerbombs Chris Jericho through a table (with plenty of help), and Scorpio Sky and Ethan Page vow to not only win but to get Lambert a chance to pin Jericho too. As a humiliating preview, Lambert puts the Walls of Jericho on its namesake, screaming that its actually a Boston Crab. Well, yes.

I keep forgetting that Conti is the No. 1 ranked competitor in the women’s division as her build was somewhat more subtle than previous people who have risen up the rankings. That’s not a criticism, mind you, just an observation. She gets some more obvious momentum here by scoring the pin for her side after Baker decides not to help out Rebel when she’s in trouble.

Another video package hypes up the showdown between Ruby Soho and Kris Statlander.

Bowens is making quite the tour of being defeated by main card guys ahead of the pay-per-view, having  just lost to Danielson last Friday. The announcers do some good-natured teasing of Jungle Boy’s facial hair while continually touting him as one of the hottest things going in AEW. Caster gets physically involved from the floor, raising the slight specter of a cheap win for the underdog, but let’s be real, Jungle Boy isn’t losing this close to Full Gear. And indeed, he manages to shrug off any more hijinks to get the Snare Trap applied.

No time for Jungle Boy to celebrate, as Bobby Fish runs down to attack him. Christian Cage and Luchasaurus head down as well but the damage has already been done, leading one to wonder if someone put him up to it. Fish is old friends with Adam Cole, right?

The Superkliq decides they’re cool with Fish, but maybe just to have him soften up Jungle Boy some more.

Similar to the Page-Omega video, another one plays to promote the CM Punk-Eddie Kingston feud.

Jim Ross feels that when the “pillars” of AEW are mentioned, Wardlow should probably be included in that discussion as well. I know a bunch of people who would agree with that, possibly even including Yuta after he gets run over by the Pinnacle’s big man.

The Hardy Family Office attacks the Best Friends as they check on Yuta, with Hardy delivering a Twist of Fate to Cassidy with a chair wrapped around his neck. Guess he’s still got some beef with the Freshly Squeezed one.

Out in the parking area, Punk and Kingston need to be pulled apart by a host of wrestlers and officials.

Though this is the Dynamite debut for Rush, the fans seem more into Martin and Moriarity squaring off, which is understandable since they are nicely matched. Of course Rush is no slouch either, and the crowd launches into a “this is awesome” chant after seeing the four combatants fly around for a bit. Unlike some heel managers, Rush actually calls for Martin to finish the job, which he does.

Miro wonders if Danielson knows if his God is blessing him or messing with him. Still, it’s not personal, just a guy trying to get back to his wife. Or something like that.

“The fans love wrestling,” J.R. says before they start the “this is wrestling” chant. It is a pretty nice scrap, no doubt about it, though only one man will take to the air. I’ll let you figure out which one that is. They’re really letting this match go pretty long, which is nice, particularly since it feels like we haven’t seen Pac all that much on Dynamite all of 2021. Pac is able to emerge victorious, getting Harwood to tap out.

It doesn’t take long for Cash Wheeler and Tully Blanchard to hit the ring to attack Pac, and when the lights go out, they come back on to reveal an even worse situation for Pac as Andrade El Idolo and Malakai Black are in the ring. The Lucha Bros. and Cody Rhodes hustle to the ring from different angles, and we’ve got a full scale donnybrook on our hands — with the faces standing tall.

Yet another video package replays MJF’s speech about the four pillars of AEW and promotes his upcoming bout with Darby Allin. “Darby is good at playing checkers,” MJF says. “I play chess.” Allin insists “I can wrestle circles around you if I want.” We’ll see on Saturday.

The Elite and Dark Order have been banned from ringside and asked to leave the arena ahead of our final segment, the contract signing between Page and Omega. Seated at opposite ends of an exceptionally long table, the two men go back and forth with some personal barbs, including Page noting Omega had another tag team partner once that he thinks Kenny may not have felt he lived up to. That gets a reaction from the crowd, but Hangman goes on to say that Omega was never proud of him, but scared instead. The champ insists he treated Page that way for a reason, to get him to live up to his potential, and offers to shake his hand before they “kill it at the pay-per-view.” They do shake, but Kenny then mockingly says, “Good job Hangman, I’m proud of you.” Then the cameraman jumps Page from behind, revealing himself to be Don Callis. Page is busted open as Callis gloats, Omega signs the contract in his opponent’s blood, and my feed goes out before the show officially ends. But hey, that’s a good way to end things, so enjoy Full Gear and we’ll see you in seven!

As a friend of mine would say, this show was aggressively fine. The in-ring action was good, and better than you might expect from the final two-hour show before a pay-per-view, but the rest of the segments were essentially commercials for Full Gear. That’s understandable but not super thrilling, hence the feeling that this was just an average broadcast. I’m looking forward to the pay-per-view, however, and lots of other people probably are too.