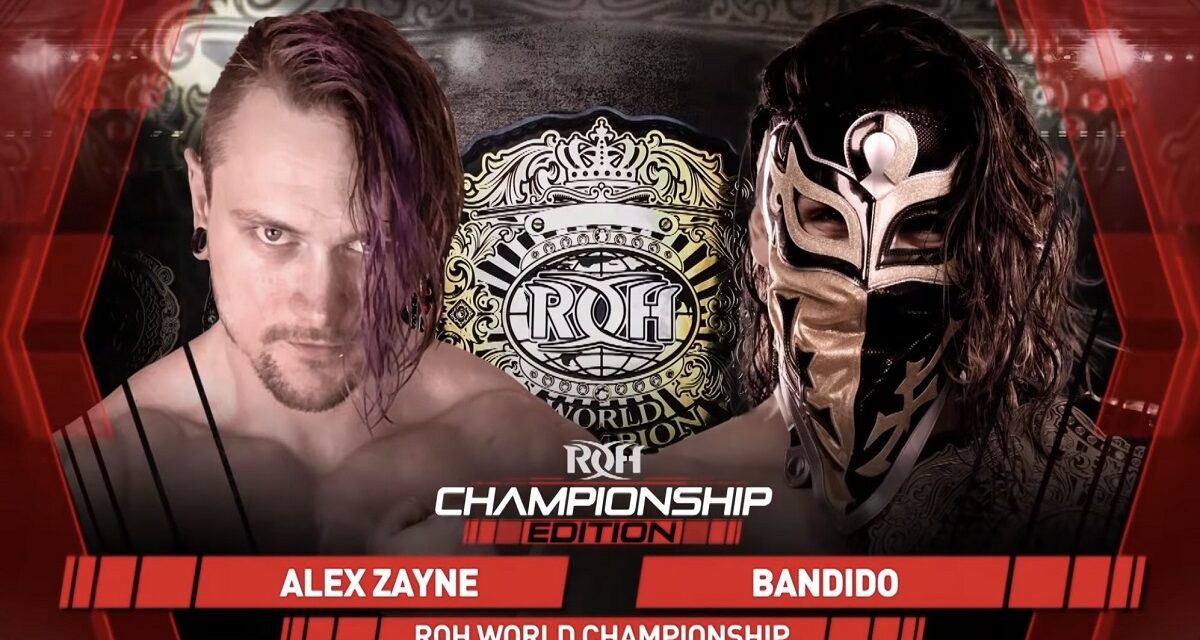 Greetings and salutations everyone and welcome to my weekly ROH TV report. We are a week closer to Final Battle and only so many TV shows before the PPV. This week is the Championship Edition of ROH TV. On the surface this seems off considering that we are on the road to Final Battle but it will for sure have some great action. Without further ado, lets get to it.

The show started off with a special intro of the show as it was the championship edition of ROH TV. Quinn McKay kicks things off from the control center as she runs through the card for the special show.

Use #WatchROH to join the conversation with the stars of ROH and the Honor Nation!

Tune in and watch the Championship Edition of ROH for free here: https://t.co/i2jLIS1sG1#WatchROH pic.twitter.com/RqPvecNgWy

We are reminded that for Pure Championship matches, the combatants get the full 60 minutes of TV. If the match takes longer then the rest of the card will be shown on Honor Club. As both men enter we got promos from them. LSG said that he has been training since he was a kid and that experience has him ready to defeat Woods. Josh Woods said that he doesn’t care about any friendship he has with. Brian Johnson joined Ian Riccaboni and Caprice Coleman on the commentary desk.

The Code of Honor was adhered to by both men as the match started. LSG got off to a flying start as he was trying to use his speed to gain the early momentum. LSG hit an F5 then locked on a cobra clutch onto Woods. Woods was able to reach the ropes to use his first of three rope break of the match. Woods went to the outside of the ring to try to get back into the match and was able to successfully do so as momentum swung his way when he re-entered the ring.

Woods locked in a chinlock on LSG and continued to get in elbow shots on him. LSG was able to escape the maneuver by connecting on a stunner attempt. LSG was then forced to use a rope break. Both men have now used one rope break each. LSG rolled Woods for a pin but was only able to get a two-count. LSG attempted an elbow after he sprung off the top rope but Woods caught him in another chinlock. LSG was able to muster the energy to get out of the move but Woods was able to flip him for a Beast Slam. Woods now locked in the Gorilla Lock as LSG tapped out to give Woods the decisive victory.

After the match, the code of honor was adhered to again by Woods and LSG. Backstage Woods is being interviewed by Quinn McKay. McKay asked Woods how he felt after his first title defense. Woods simply said “One and oh” as he walked away.

At the announcers table, The Bouncers come out to once again continue their harassment of Riccaboni and Coleman. Coleman and Beer City Bruiser needed to get separated by staff after Beer City Bruiser challenged Coleman to a match next week on ROH TV.

Alex Zayne is now ready for his championship match after earning the victory at the last PPV.

Tune in and watch the Championship Edition of ROH for free here: https://t.co/i2jLIS1sG1#WatchROH pic.twitter.com/MUX50uxKFn

Bandido now wants to be known as the “Most Wanted Champion”. As per usual, both men got a promo as they entered the ring. Both men listed their credentials and said they will leave tonight as champion.

Zayne and Bandido hug as the match started. The match started with a series of back and forth offense from both men. Bandido got Zayne into a Gorilla Press. Bandido hits a roll up after Zayne attempted a hurricarana. Zayne kicked out and Bandido was able to land a fallaway powerbomb.

Zayne and Bandido trade chops. Zayne was able to prop Bandido on the turnbuckle and delivered a massive chop to Bandido’s chest. Both men are now trading blows on the top turnbuckle. Bandido attempted a Burning Hammer from the top rope but Zayne was able to successfully counter HOWEVER Bandido delivered a scoop slam from a torture rack. Bandido was only able to get a two-count from this insane maneuver.

Zayne landed an inverted Spanish Fly but struggled to get Bandido in a pin as the match was waring him down. After a two-count, Zayne went to the top rope and jumped off but Bandido was able to side step at the very last second. Bandido now hit Zayne with the X-Knee. Bandido, now in full control of the match two 21-Plex’s and got the pinfall victory.

After they battle up the turnbuckle again, Zayne hits some kind of inverted Spanish Fly. Zayne struggles to get to pin, but he does and only gets a two-count. It was close. Zayne once again goes up top, he jumps off but Bandido barely side steps and Zayne gets a face full of mat. Bandido gets him with the X-Knee.

Bandido hits the 21-Plex. It looks like he’s going for a roll up pin for better coverage, but instead of does a complete follow through and hits a second 21-plex. He locks in the pin and the victory.

After the match, Bandido helped Zayne up and both men celebrate. Bandido leaves the ring with the title and points to Jonathan Gresham who was at the commentators booth to end the show.

Next week, the champions edition of ROH TV.

Thank you for watching honor nation!

Join us this weekend on ROH TV or next Monday during the ROH watch party to see these awesome matches ⬇️#WatchROH pic.twitter.com/wPsWYujwZ1

This week’s TV was good as it featured championship matches. Whole the matches were good, I really hope that we get more build up to Final Battle. Until Next time!