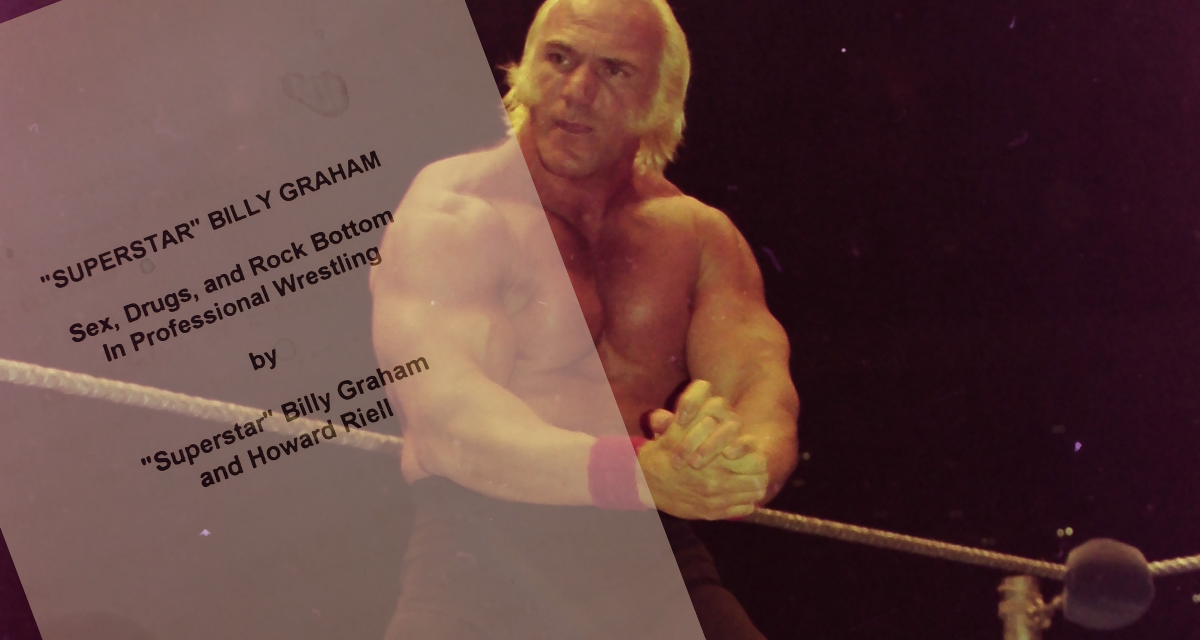 Recently, Pittsburgh professional wrestling enthusiast, collector and historian Ron Russitano shared the story of a fascinating, mysterious, and unpublished autobiographical pitch from “Superstar” Billy Graham. The proposed tome, with assistance from accomplished journalist Howard Riell, has sat on at least one dusty shelf since the early 1990s.

The book is not to be confused with Tangled Ropes, the WWE-branded autobiography with co-author Keith Elliot Greenberg. The earlier pitch, dated 1993, came three years after Bruno Sammartino’s An Autobiography of Wrestling’s Living Legend, which came before a flood of wrestler-penned books, most notably Mick Foley’s 1999 breakthrough Have A Nice Day.

The typed missive was being shopped around in the early 1990s by Riell. Soon after Sammartino’s book was released, Russitano had a popular book signing with “The Champ” at his Phantom of the Attic comic book and memorabilia shop in what was then Parkway Center Mall a few miles south from downtown Pittsburgh. Believed to be through a mutual friend, Riell somehow caught wind of Russitano and approached him about an investment in the project.

Sadly, wrestling books weren’t selling at that time. Although a prideful product in Pittsburgh, Sammartino’s book did not proceed past the first run, which was believed to be around the five-thousand-unit count and Russitano wasn’t able to invest in Riell’s proposal. While he doesn’t remember the exact amount, Russitano knows that the request was for thousands he couldn’t afford at the time. Because of the presumed scarcity of the first Graham book, no one knows how many other potential investors were contacted.

So, the draft languished for three decades. Russitano, a big fan of Sammartino, Dominic Denucci and “Battman” Tony Marino, has started to liquidate some of his vintage professional wrestling magazines. That’s when he unearthed the gem from the “Superstar.” 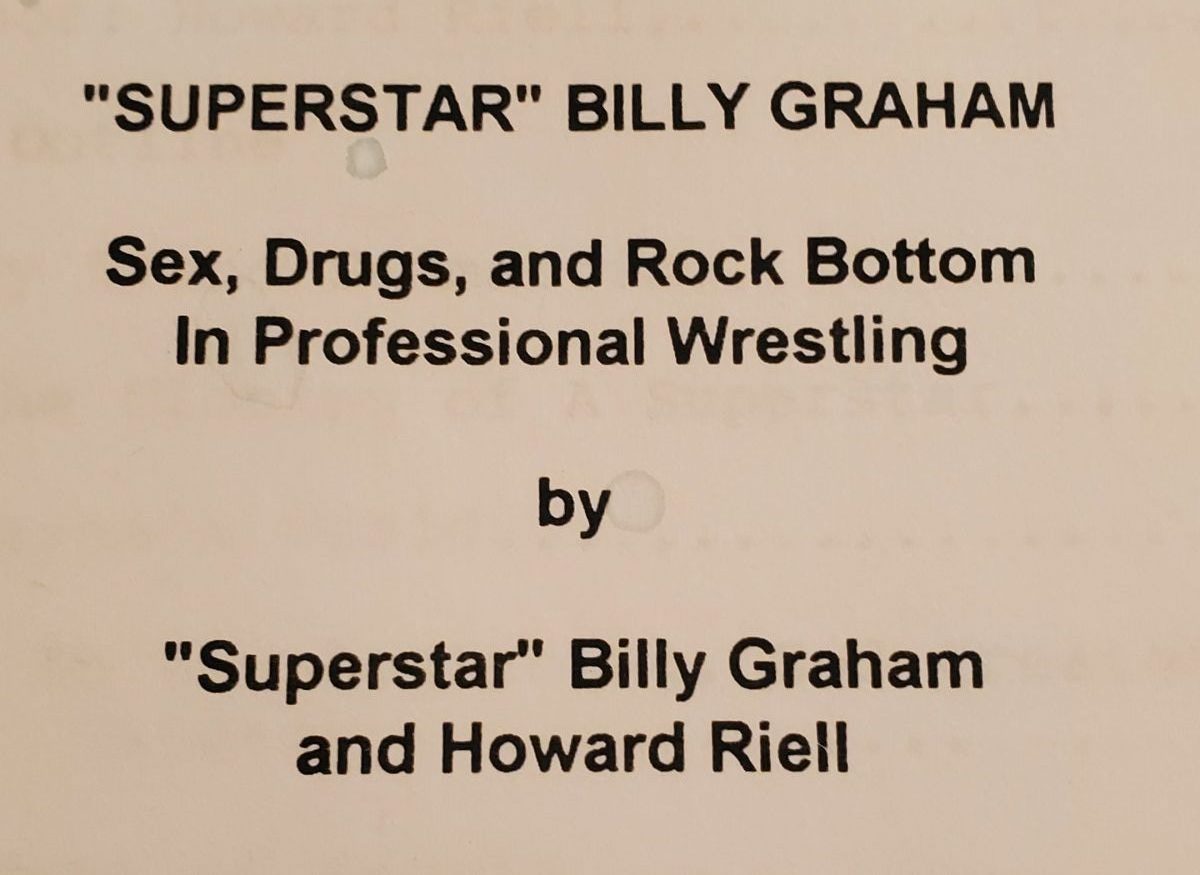 The title page from the original Superstar Graham manuscript.

The tender for Superstar Billy Graham, Sex, Drugs and Rock Bottom In Professional Wrestling by Graham and Riell features a 27-page introduction, as well as profiles of both authors. Riell was a 36-year-old, 22-year wrestling fan who had been in the newspaper and publishing business since 1979. According to his LinkedIn page in 2021, Riell has written about the foodservice industry since 1983. He also worked in public relations. In the biography accompanying the proposal, he touted work with The National Enquirer, New York Daily News, and the science-fiction publication Starlog, among many others. Riell lived in Kingston, Pennsylvania, near Wilkes-Barre.

In the proposal, then-50-year-old Eldridge Wayne Coleman, aka Graham, is identified as being born in 1944, where other sources, including Tangled Ropes, report June 7, 1943. Graham was to be offered to talk show hosts from coast-to-coast (including an “open invitation” to return to the Phil Donahue program) to promote the finished project. A lot of the project may have been completed in 1991, a year after Sammartino’s Imagine Books Inc. book according to the proposal. Outlined chapters note that McMahon, then-WCW owner Ted Turner and brief-time World Bodybuilding Federation roster-member Lou Ferrigno of TV’s Incredible Hulk were mentioned as “will be invited” for their input into the product. Once completed, “The book can be submitted in manuscript form, or on IBM-compatible computer disk.”

Interestingly, the Introduction to the book was written by Sammartino. The introduction reports all of the objections Sammartino championed against for years—the sex and drug (steroid) scandals. “Bruno lays the blame squarely on the doorstep of Vince McMahon, Jr.” is written in the draft. The introduction ends with Sammartino turning his thoughts to his friend and colleague Graham.

A chapter-by-chapter outline contained headings like “The Cloning of a Superstar,” “Wayne’s World,” and “In the Beginning, God Created Calgary.” The Overview of the book promised to be “The first book ever to expose professional wrestling—and the scandals that threaten to destroy it.” Around this same time, the WWE drug trials, with Vince McMahon and Harrisburg, Penn., urologist Dr. George Zahorian III, were making international headlines. The complete manuscript was explained to “contain approximately 330 pages and two than two dozen photographs.”

The book promised “a riveting tale of dazzling spotlights, failed dreams, and shattered reality.” Plenty of suggested scandals involving McMahon (a proposed Chapter 10 calls McMahon “The Most Hated Man in Wrestling”) and long-time friend Arnold Schwarzenegger are teased. Over time, some have been come to surface, while others never gained traction.

Now, the book has all of the familiar themes of countless other autobiographies and biographies that have been printed since this was written: early life, early career, and major highlights. Graham asserts that he wrestled “an unbelievable 356 times” in one calendar year before beating Sammartino for the WWWF championship.

Graham argues that simply changing his persona from villain to fan-favorite would have buoyed the WWWF for years to come. He claimed that his cool bad-guy character was already evolving, and he believes to this day that his box office draw would have been top-tier. 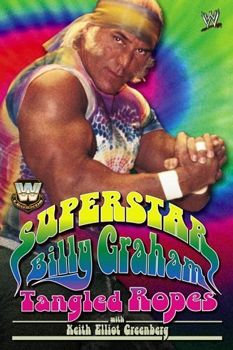 Another chapter, “Blue Steel” was to delve into the murder of Bruiser Brody and other “sub-culture” conspiracies. Graham writes a lot about his battles with drugs and depression, which would be extensively detailed in Tangled Ropes. Contacted by email, Greenberg wrote that he was unaware of the previous work, but knew that Graham had previously attempted to tell his story. “I will say that working with Billy was one of the most pleasant experiences of my professional life,” noted Greenberg.

Graham writes about knowing his run at the top of the WWWF would culminate after only 10 months and that Vince McMahon Sr. was grooming Bob Backlund as the next babyface champion. Graham argues, ceaselessly to this day, that Backlund was not qualified to be champion over himself. Conversely, Graham praises Sammartino as the greatest wrestler of all time (many, including Backlund, echo that sentiment).

Along with the proposal, Riell included photocopies of photographs of Graham, as well as copies of magazine articles used as some source material. Google searches provide no hint that this book was ever finished. It would be interesting to see if anyone could retrieve the work from any surviving floppy disk. Then again aside from Riell, this copy, in a manila folder and non-descript brown paper bag, may be the only version in existence today. (Riell did not respond to requests to talk about the Graham book.) 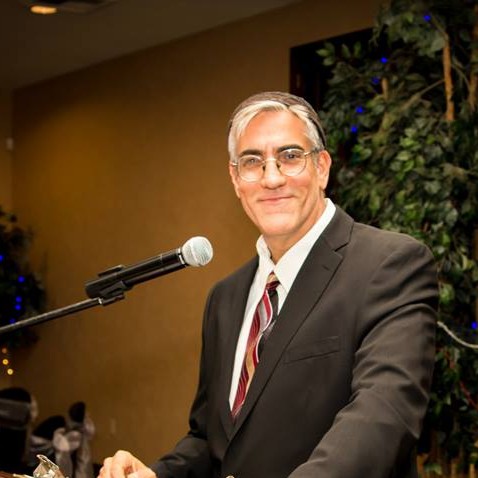 By his own count, the veteran journalist Riell has written 28 books (Amazon touts some themed and related titles as “Unfinished” parts in a series) while many other titles invoke “Enoch” (Methuselah’s father) and other Hebrew topics. Books are affordable and available online. Riell may still host a talk radio program which is based in Colorado.

Superstar Billy Graham has lived in the Phoenix area for decades and occasionally makes wrestling headlines for sometimes controversial opinions. He apparently made amends with the World Wrestling Federation as he was inducted into their Hall of Fame in 2004. Tangled Ropes, his 341-page autobiography published by the World Wrestling Federation and distributed by Pocket Books in 2006, was a huge success. Whereas the first book draft included an introduction by Bruno Sammartino, Jim “J.R.” Ross wrote the introduction for Tangled Ropes (Sammartino would not settle his differences with the WWE until 2013).

Ron Russitano, who has worked part-time for the Pennsylvania State Athletic Commission for more than 20 years, owns and operates Phantom of the Attic in the Green Tree suburb of Pittsburgh.