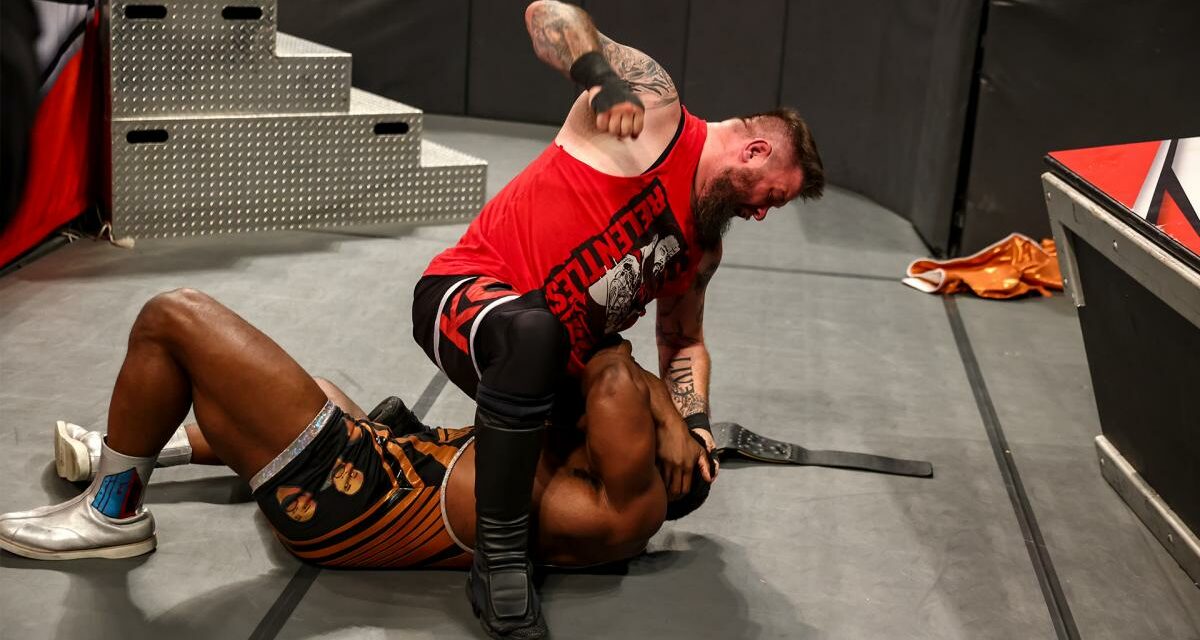 Survivor Series is less than two weeks away and there’s not much of anything on the card yet. It sure looks like we are getting champ versus champ matches, but nothing is official yet. And there’s been no mention of who will be representing Team RAW. There’s much work to do, so let’s get to it.

Big E is slathering himself up with oil backstage while Kevin Owens tries to plead his cases that he had no idea what was going on last week when Seth Rollins interfered. That interference allows Owens to pick up the win against E. Big E doesn’t want to hear it; he has a match tonight.

Seth Rollins, contract in hand, heads to the ring. Seth announces that he will be leading Team RAW to a victory over Smackdown as the undisputed face of RAW. He turns his attention to Kevin Owens. He has known Owens for years and knows this. Kevin Owens will eventually stab you in the back. Just ask Sami Zayn, or Kofi Kingston. Rollins calls him gutless, soul less and a liar.

Well, that’s enough to get Kevin Owens to confront Seth. Rollins bails out of the ring and Owens gives chase. The two come to blows and Rollins nearly gets power bombed onto the apron, but is able to escape.

Riddle is super excited about their team up with the Street Profits, but Orton isn’t pleased that Riddle tried to play hero and help out the Street Profits. Orton doesn’t care about them and they are standing right behind him. Orton lays down the law, telling the Profits that they are on their own if they have a vendetta against Omos.

Riddle just can’t help himself and tags himself in after Omos takes out the Street Profits. Orton is beside himself as Omos choke slams Riddle. Orton tries to enter the ring, but is pulled off the apron by Roode and Ziggler. Styles wants the tag, but Ziggler steals it. Styles and Ziggler argue. Roode pulls AJ off the apron, but is grabbed by Omos, who slams him into the barricade. Ziggler covers Riddle and gets the three count.

Right after the bell, Orton delivers and RKO to Ziggler.

Backstage, Kevin Owens lets Rey Mysterio know how much he has looked up to him. Owen apologizes for the timing but needs to know that Rey believes him. Rey has to head to the ring.

Rey and Dominik make their way to the ring to meet with Adam Pearce, who wants to talk about Survivor Series. Some how I missed that the Survivor Series team were announced over the weekend. Dominik is on the team, but Pearce is concerned with his lack of experience. Dominik is still on the team, unless he loses his match to … BOBBY LASHLEY! Sorry, kid, you’re done.

Looks like Bobby Lashley is joining Team RAW. It’s a only a matter of time; Lashley hits a spear. The ref checks on Dom, until Lashley locks in the Hurt Lock. Dominic taps out.

Backstage, Set Rollins talks with Alpha Academy and wants Otis to show Big E that he isn’t the face of Monday nights. Rollins wants confirmation that he is right about Kevin Owens. Chad Gable is more than happy to confirm that Owens is a liar, like Aaron Rodgers. (Gable’s words; not mine.)

Gable tries his best to over power Big E and then counter with his mat wrestling skills. Then he runs into a back elbow. E drags Gable to the apron and hammers him with fists across the chest. The champ connects with a big splash. Gable with a belly to belly suplex and hits a moonsault, but only gets a two count. Gable hits a German suplex and bridges into a pin, but E kicks out. Big E lowers the straps and looks for the Big Ending. He delivers and covers to get the pin.

After the match, Otis wants him some of the champ.

R Truth believes in Kevin Owens, but then he also believes in the Loch Ness Monster, Bigfoot, leprechauns and all sort of mythological creatures.

Sonya Deville announces the Women’s Survivor Series to the locker room. Come on down, Bianca Belair, Queen Zelina, Carmella, Liv Morgan and Rhea Ripley. And tonight, they will take each other on in a fatal five way. The winner gets a title shot against Becky Lynch. Naturally this leaves the other women on the roster quite upset. Doudrop wants to know why she isn’t on the team. Bianca had her opportunity last week and crashes and burned.  Adam Pearce tries to step in, but Dana Brooke is also upset. She singles out Liv Morgan and wants respect. Nikki A.S.H has been the champion.  Carmella insults her, so Rhea has to step in.

Rey Mysterio questions Adam Pearce’s integrity as Dom gets worked on by the trainers. Austin Theory takes a quick selfie.

Maverick beats on Reggie and the two trade blows. Reggie ducks under a clothesline and flips and dodge to avoid strikes. R Truth runs down with a ref, but is cut off by Shelton Benjamin and Cedric Alexander. Maverick rolls up Reggie to get the pin.

With the 24/7 rules back on, Akira Tozawa rolls up Drake and gets the three count. He is immediately jumped by Corey Graves, who pins him to win the title. Graves is then pinned by Byron Saxton and wins the title. Maverick rolls up Saxton to win the title back. Maverick tries to escape through the ring only to get pinned by Reggie.

Reggie is able to flip his way out of trouble and escape with his title.

Doudrop wants to know how Bianca can lose a title match and still have a chance to earn another shot.

A brawl breaks out on the floor before the match can even start. Becky Lynch keeps running down Liv Morgan on commentary. She praises everyone else in the match, but just disrespects Morgan. Foreshadowing much? Liv hits Carmella in the corner with a big knee and a kick to the face. Zelina breaks the pin. Rhea takes out Bianca with the Rip Tide, but Morgan is able to break up the pin. Liv with a hurricanrana to Rhea. Liv avoids the Rip Tide and hits Ripley with the Oblivion off the ropes. Zelina breaks up the pin. Belair picks up Zelina, kicks Morgan out of the ring and hits the KOD. Doudrop pulls Bianca out of the ring and slams her into the ring post. Carmella tries to score a cheap pin, but Morgan gets her in a crucifix pin and gets the three count.

Lynch is screaming that this was a lucky win, standing atop the announce table. Morgan joins her there and the two lock eyes. Becky walks off with her title.

Seth Rollins rolls up on Big E backstage. He doesn’t want any trouble, he just wants to know where his head is at. There’s no way E should trust Kevin Owens. Big E is planning on sitting at ring side to make sure everything goes smoothly.

Big E sits at ringside and is followed by Austin Theory, who is just grabbing some selfies. Big E slaps the phone out of his hand.

Before the match, Seth Rollins needs to get something off his chest. Rollins tells Big E that last week was a plan between him and Kevin Owens. KO makes his entrance and immediately attacks Rollins, sending him into the crowd.

The ref calls for the bell and the two start throwing punches. On the floor, Rollins is whipped into the security barrier and Owens hits him with a senton. KO crushes Rollins against the barrier with a cannonball. Owens drags Rollins onto the ring apron and tosses him into the announce desk. Owens with another senton, but Rollins blocks with the knees. He slams Owens into the table as we go to commercial.

After the break, Rollins is yelling at Big E to watch him. Rollins with a back suplex. Rollins with another kick the ribs. He follows with a snap suplex into a cover, but KO kicks out. The two trade slaps, until they trade kicks. Owens with a DDT and both men are down. Rollins gets to his feet and hits a sling blade. Owens rolls away from a big splash from the top. Rollins crashes and burns while Owens hits a top rope splash of his own.

After another commercial, Rollins runs into a super kick and both men go down again. Rollins with a kick and then an enziguri. A lariat takes down both men. KO sits atop the turnbuckle, but Seth catches him there. Owens blocks a superplex and counters with a fisherman’s buster from the top turnbuckle. Rollins is able to break the pin by getting his foot on the rope.

Rollins hits the Pedigree but can’t make the immediate pin. Owens gets a shoulder up at two. Seth goes back up top, but Owens crotches him on the turnbuckle. KO gets caught and hit with a buckle bomb. Rollins then walks into a pop up powerbomb. He only gets a two count. Seth blocks a stunner and hits a rolling elbow to the back of the neck. Owens rolls out to the floor. Rollins leaps off the ring steps toward Owens. Big E clears out as the two crash into the chair. Rollins is able to get back in the ring, but Owens collides with Big E and cannot beat the ten count. The ref calls for the bell.

Winner via count out: Seth Rollins

After the match, Owens kicks Big E in the head. He whips the champ into the ring steps. Owens tears apart the commentary table before powerbomb E into the ring apron. He throws punches on Big E on the floor. Several WWE officials finally run down to break things up. Owens goes back for more as officials try to keep him away.

Monday Night RAW delivers another solid show that focuses on wrestling. The eight man tag went over two commercial breaks, as well as the main event. There wasn’t a talk show is sight and there was almost zero filler.