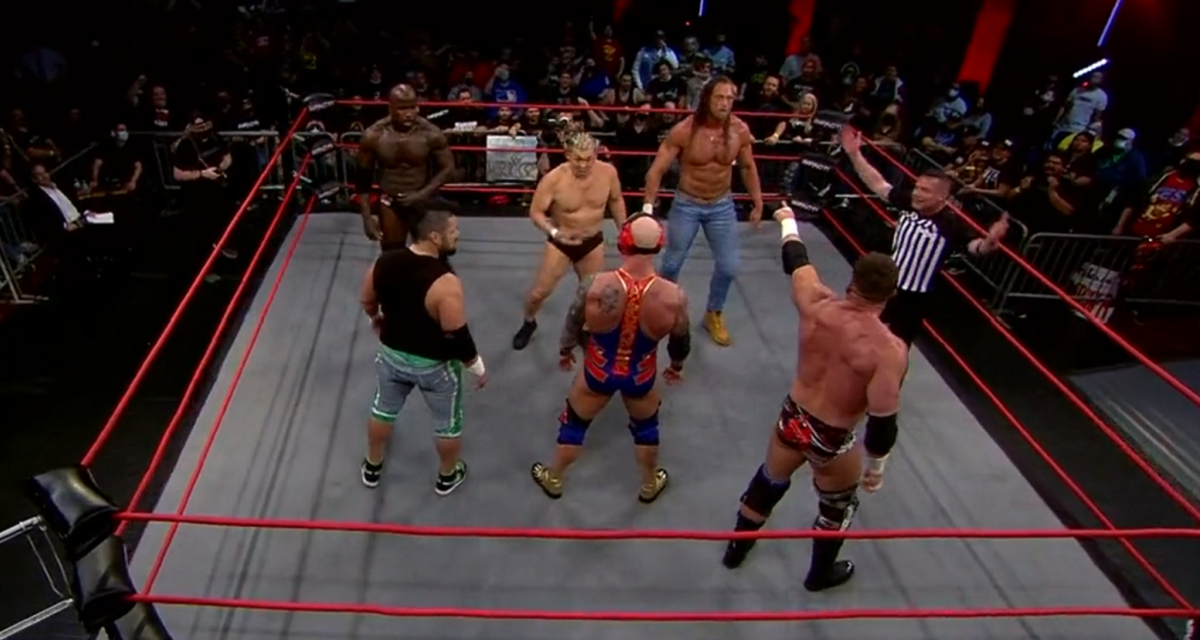 After losing the title at Bound For Glory, Josh Alexander’s quest for revenge never really got resolved, thanks to the challenge thrown down last week by Minoru Suzuki. Tonight’s main event saw the two of them throw hands for the first time, as they were on opposing teams in a six-man tag team battle. While Suzuki’s team ultimately got the win, nothing was really settled between the two this week, and it’s likely that this one is far from over.  And, based on the crowd reactions when they did square off, the Impact faithful are definitely hoping for more.

The winner of this one will be the number one contender for the X-Division Championship. This was a fast-paced match with some exciting moves early, including Laredo Kid hitting a huge Moonsault from the top onto all of the other three opponents on the floor. Later, Kid did some flippy-doos to stun Black Taurus in a lucha exhibition.

Even Maclin got into the diving action at one point, flattening Taurus on the floor. With Taurus down, Maclin tried to get back in the ring, but he was knocked from the apron by Rohit. Rohit celebrated that too hard, and paid for his cockiness when he fell to the Laredo Driver for the pin.

After the match, X-Division Champion Trey Miguel came to the ring and shook hands with Laredo Kid. Maclin ran in and hit both of them, but they teamed up and threw him out of the ring.

This was a good X-Division style match. Taurus is always fun to watch, but Laredo Kid was the MVP of this one with some of his dazzling offense. Him vs. Trey is bound to be visually fantastic when they eventually go one-on-one.

Backstage, Gia Miller interviewed Madison Rayne who was there with Kaleb. Rayne said that she will beat Mickie James for the Knockouts Championship tonight. Gia asked if Rayne would be distracted from the match because she also has to interview the Iinspiration tonight on Locker Room Talk, but Madison had no idea what Gia was talking about.

Gia then interviewed Ace Austin and Mad Man Fulton. Austin trumpeted his win over Chris Sabin last week – a feat that Fulton will get his chance to do tonight.

Violent By Design – Eric Young, Deaner, and Joe Doering – came to the ring. Young said that Rhino made a bad decision by leaving VBD, and for that he paid the price last week. Young said that he was going to get his hands dirty again, after not doing so for the past six months.

An unnamed wrestler came to the ring. Young asked him his name, and the guy said it was Jai Vidal, and he was a local Las Vegas wrestler. Young tried to verbally intimidate him and said he was the cure for Vidal’s disease. This led to…

This was a complete squash. Young dominated him for a few minutes and then ended things with a Piledriver.

This was a fine way to re-establish Young as a dangerous threat.

The Knockouts Tag Team Champions, the Iinspiration went to the Locker Room Talk set, but Madison Rayne wasn’t there. The Iinspiration were upset by Rayne’s no-show and tried to leave. Every time they tried to leave through a door, Cassie thought she saw Decay’s Rosemary and Havok and got freaked out. Jessie McKay finally talked her down and they left. When they did, a camera turned to a mirror where “Turning Point” was written in red lipstick… or blood? Either way, it looks like that’s where the two teams will meet again for the gold.

After leaving the locker room, the Iinspiration ran into Gia Miller and Cassie tried to tell her what she’d seen. Gia told her that if she was afraid of spooky people, she should avoid Kimber Lee and Brandi Lauren, the Undead Bridesmaids. Lee thought that using the undead to fight the “ghosts” (i.e. Decay) might be a good tactic, so then went to find the Bridesmaids.

Match 3: The Good Brothers vs. FinJuice

The Good Brothers’ Tag Team Championship was not on the line in this one. This one started off methodically, but then the Good Brothers used some dirty tactics and took over, isolating Juice Robinson in the wrong corner. He finally escaped and tagged in a fresh Finlay who was on fire, running through Anderson and Springboard Diving onto Gallows on the floor. Soon, all four men were fighting and just as soon, all four of them were down, weakened from said fight. This made it the perfect opportunity for the Bullet Club to run into the ring and put a beating on all four of them.

The Bullet Club hit everyone in their crotchel areas and celebrated their dirtbaggery by posing over their fallen bodies.

The match was pretty solid up until the run-in. If you’re invested in the history between these three teams, then you’d have liked this, at it continued their three-way feud.

Gia was in the back interviewing Johnny Swinger who was auctioning off items from Swinger’s Palace so he could buy a Las Vegas casino. John E. Bravo and Hernandez assumed Swinger was doing that to avoid a confrontation with The (KISS) Demon and said they would help him overcome that fear, so Swinger left with them.

FinJuice cut a promo backstage, complaining about the Bullet Club’s interference and said but for that, they would have beat the Good Brothers and earned a title shot. Impact Executive Vice-President Scott D’Amore came up to them and said that they deserved a chance to get revenge at the Bullet Club. The two teams will compete next week and the winning team will be the number one contenders.

Okay, maybe D’Lo Brown needs a break from commentary. Before this one started, he came up with this gem: “Either of these women, you put them in the ring, ten times out of ten… who knows?”

Mickie started out by out-wrestling and out-thinking Madison, and even a Kaleb distraction and an eye poke by Madison (right in front of the referee, so that wasn’t good) couldn’t stop her. But then Kaleb got involved again, shoving Mickie off the top rope, and then Madison did take over. Madison locked on the Rayne-Maker submission, and though Mickie escaped, she was weakened. But Mickie caught her second wind, and fought back with some big kicks and a nice Neckbreaker. Another distraction by Kaleb left Mickie prone for a Cutter and the tide turned again. Kaleb tried to slap Mickie after Madison threw her to the floor, but Mickie ducked it and whipped Kaleb against the ring steps. Mickie then went back into the ring, avoided a charge from Rayne and kicked her in the gut, and followed that up with a Flying Lez Press off the top to get the pin.

This was okay, but had too much Kaleb and that hurt what could otherwise have probably been a really good match.

After the match, Mickie was celebrating, and Mercedes Martinez came to the ring. She reminded Mickie that she was the number one contender after winning the tournament at Knockouts Knockdown, and that match was going to happen at Turning Point.

Gia Miller interviewed Josh Alexander, Eddie Edwards, and Matt Cardona who will be taking on Moose, W. Morrissey, and Minoru Suzuki in the main event. They were all fired up.

The opening minutes saw Sabin continuously trying to hit and move, but Fulton would catch him and Sabin would have to fight his way out of it. It worked for a while, but eventually when going for a dive to the floor, Fulton caught Sabin and Chokeslammed him on the apron, to take us to a commercial. When we returned, Fulton was manhandling Sabin, pounding on him, hanging him up with a choke in the corner, and then hitting Sabin with a Flying Cross Body.

Sabin was able to mount a comeback and this time his dive from the top turnbuckle to the floor worked, and Fulton went down. But when Sabin went for the Cradle Shock, Fulton was still too strong and he reversed it into a Torture Rack Driver for a near-fall. Sabin continued to scrap, though, and was able to roll up Fulton in a Small Package for the win out of nowhere.

This was a good big vs. little man match, though the ending seemed a bit abrupt. It may be time to break Fulton out from under Ace Austin, and this might have been a good start to that with a win over Sabin. Apparently, though, that’s not the plan just yet.

Suzuki’s theme sounds like a YES tune – particularly the vocals but also the instrumentation, and even the translated English lyrics.

This one started off started with some good technical from Josh, but soon escalated into a hard-hitting affair. Before the commercial, the babyfaces cleared out the ring with some dives and hits on the heels on the floor. Back from the break, and the faces were still in control, with Cardona faring well against Moose. But he got wrapped up in the ropes with a Suzuki arm wrench and when he got loose, Moose hit him with a huge Body Block. The tough trio then took turns beating the tar out of Cardona and used some old-school tactics to keep him trapped in their corner. Cardona finally got away and tagged in Alexander who was motivated to pummel everyone on the other side of the ring, and did a good job of it, blasting Morrissey in particular with a series of German Suplexes. Eventually, Alexander and Suzuki exchanged hard forearms in the centre of the ring. And then their teammates joined them, and they lined up before pairing off into three two-man brawls, which was a cool visual.

After a series of finisher attempts, including a Gotch Piledriver on Alexander by Suzuki, Eddie took a huge boot to the face by Morrissey and then a Powerbomb, and Morrissey pinned Edwards to give his team the win.

This was a good match with some classic wrestling psychology combined with slobber-knocking hard hits. The crowd really responded to this one, and certainly it whet the appetite for more from Josh, both against Suzuki and the man who stole his title, Moose. Strong main event.

Bookended by two strong matches, this episode was pretty good. While some of the matches / developments weren’t necessarily   mind-blowing –  like the Mickie James match, or the ongoing three-team feud over the Tag Team Championship – they weren’t bad overall. With two more episodes to go before Turning Point, they still have time to flesh out the rest of the card and escalate things. But for now, the building up has been fine.