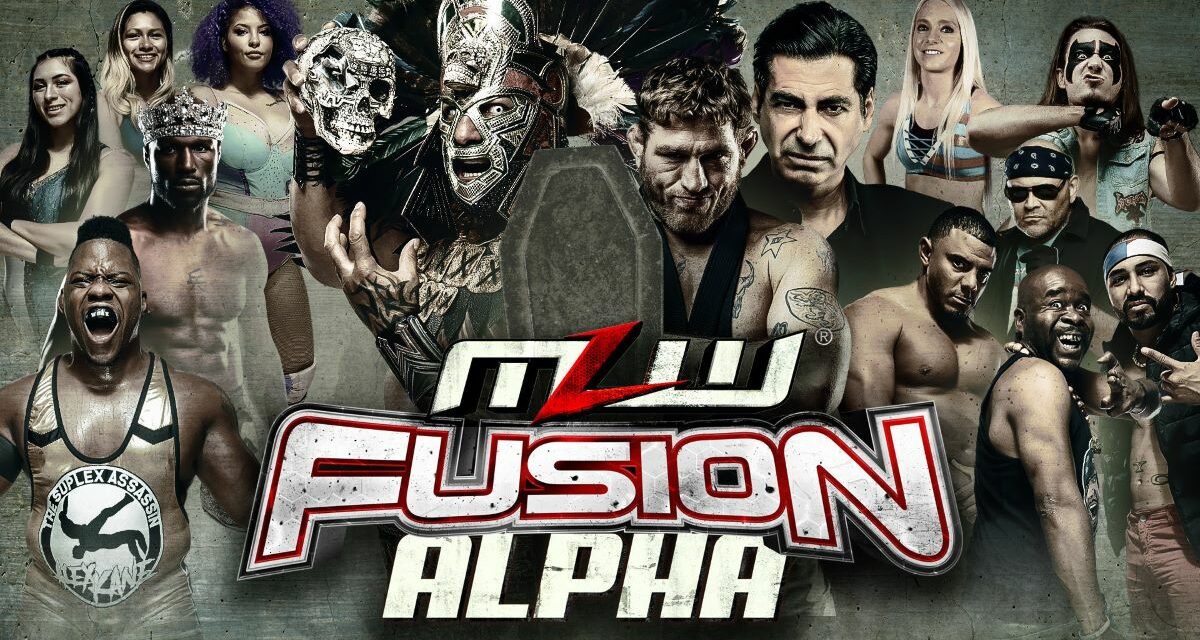 Ever had that boss from Hell?  You know that guy; the one that make coming to work more miserable than it has to be.  “Filthy” Tom Lawlor is getting that in spades with “El Jefe” Cesar Duran” in MLW, and things are not looking any better for the former champ.

As we go to the ECW Arena in Philadelphia, PA, commentators Rich Bocchini and Joe Dobrowski take note as Duran comes out to the ring.  Duran asks his “renegades” who should be sacrificed in the ring. Before the fans can answer, 5150 comes out, and Konnan gets in Duran’s face and says he can’t believe that Duran is ducking him. Dr. Julius Smokes, Danny Rivera, and Slice Boogie makes all the necessary introductions, and Duran is wondering if they’re high on glue.  Konnan say nah, he’s just high on weed (I laughed at that), and Konnan wants Los Parks’ tag belts, and wants them now. Ask and ye shall receive, as Los Parks come out, and it’s an all-out brawl that goes to the back of the arena.

And talk about bad timing, “Filthy” Tom Lawlor and Kevin Ku come out and get in the ring, and Duran is nonplussed. Lawlor says he was screwed out of the Opera Cup, and he got screwed out of the title match with Hammerstone a few weeks back. Lawlor is a prize fighter, and he wants a title fight.  Duran happily obliges, and gives him King Muertes for the IWA Caribbean Championship in a casket match. Moral of the story, kids:  Be careful for what you wish for, especially around El Jefe.

Before the women come out, Contra Unit cuts the feed, and Mads Krügger cut a promo, saying he’s the leader of Contra Unit come War Chamber, and I’d love to tell you what else he said it I understood a single goddam word he said. But, you know the rest:  Threaten violence, Back Hand, and then yadda yadda yadda Hail Contra.

Got it?  Good.  Onto the Featherweight Division, and that is your First Match of the night.

This is the first match for Skye in MLW, and Dobrowski labelled her as the Midwest’s best kept secret in women’s wrestling.  Skye is also part of SHIMMER, where the rest of the women come from, and seeing her and Nightingale tag against the Stars will be an interesting sight, since Vox and Exo are more established as a tag unit.

The start of the match is all Sea Stars with great tag chemistry, as they work over Skye.  A quick tag to Nightingale, and The Babe with the Power sends Skye to a corner splash to Vox, and then Nightingale his a senton and uses Skye to senton slam Vox to pin for a two count.  Now Skye kicks into gear, as she uses her ring awareness to trip Vox and uses the ropes for a second rope dropkick to cover for a two count.

Skye attempts a crossbody that misses, and Vox tags Exo and she clears house, and gets a northern lights suplex to Nightingale for another two count.  The Sea Stars set up a double tag move, but Skye disrupts before it can be executed.  Nightingale goes outside the ring, and Holidead appears under the ring, and drags her under.  With no partner, The Sea Stars deliver the Tidal Wave finisher to get the win.

Your Winner via Pinfall:  The Sea Stars

Even though the crowd seemed dead for this match, it was a well fought contest for the Featherweights.  After the match, Nightingale looks the worse for wear and Skye/Sea Stars carry her to the back to get attended.

We gets shots of Calvin Tankmen getting jumped by America’s Top Team, and Alex Kane says Tankman is now out of the Opera Cup courtesy of him and King Moe.

MLW Fusion Thanksgiving will be a ladder match for the Openweight title, and the five men involved will be Zenshi, Myron Reed, Alex Shelley, Alex Kane, and a wild card entrant.

On Thanksgiving the vacant National Open Weight will find a new home as it will be hung high and defended in a Ladder match on a special FUSION Thanksgiving!#MLWFusion
▶️ https://t.co/Di9PyloFZy pic.twitter.com/FcdImSCZF9

We talk about what to come in the semifinals of the Opera Cup, with next week will have Davey Richards and Booby Fish in competition (yes, please!), and breaking news from “the Interview Queen” Alicia Atout, as she confirms that Calvin Tankman will be fighting. He won’t be dropping out anytime soon.  Sorry, Alex Kane.

We now head back to the ring for the inaugural Alex Kane Prize Fight Open Challenge, and Kane will face anyone that wants to step up to the plate.  Well, faster than you can say “The Four Horseman”…it’s Warhorse in MLW so….

“The Suplex Assassin” Alex Kane (with King Mo) vs. Warhorse

King Mo gets all in Warhorse’s grill, but a very heavy metal head butts knocks Mo out of the ring, and Alex Kane goes on the attack, but Warhorse is able to rock “The Suplex Assassin.”   Mo tries to get involved in the match, and Warhorse gives chase, but Kane attacks from behind.  Back in the ring, Kane head butts Warhorse on the top turnbuckle, but you can’t stop a metal head that way.  A missile dropkick by Warhorse, and he goes to rush at Kane, but King Mo grabs his leg.  Warhorse shakes loose, and rushes for a splash, and Kane catches Warhorse and hits an exploder suplex to the corner turnbuckles.

Then it’s all Kane, as he gets a pump handle suplex to Warhorse and Kane showboats a bit before covering for a two count.  Kane gets a third suplex, and Warhorse tries some offense, but a ripcord Olympic slam and the Mark of Kane (a fisherman variant suplex) for the win.

Your Winner via Pinfall:  Alex Kane

At the top of the stage, Alicia Atout inquires to Kane about him trying to bump off people, and Kane take umbrage at the question.  Simply put, he wants to be in the Opera Cup, no matter who’s in the way.

"I'm taking the Opera Cup whether you want me to or not!" – @Alex_Kane11#MLWFusion
▶️ https://t.co/Di9PyloFZy pic.twitter.com/Rr2pITLvYJ

Backstage, Lawlor is with Ku mapping out a strategy (and I use the term loosely) on how to get win the casket match. Ku says that things haven’t been the same, and the corporate sponsorship is going waaaay down and he needs to be on his own. Great timing, Ku.

Now to Josef Samael, as he waxes eloquent on the upcoming War Chamber conflict.  Samael states is the leader of Contra Unit and the real Jefe. Hammerstone has three guys, but he has an army and everyone will bow to him. Hail Contra, indeed!

A reporter tries to get a world from the MLW heavyweight champion Hammerstone on meeting with Duran regarding War Chamber this November 6th, but he dismisses them.

Backstage, Richard Holliday unwraps the bandages and he and Atout talk about his next marketing of Japanese candies, which is behind a door he stored and…waitasec, it’s TAJIRI!  Holliday is flummoxed as he is eating all the product. Konnichiwa, suckers.

Now is the time for the Main Event, and it looks to be a killer Casket Match…

Lawlor comes out first, and looks at the casket draped with the Aztec sun calendar (nice touch) with some concern, since his whole Team Filthy crew is absent.  Next a dark woman in a cloak comes out burning sage out and….what in the name of Lucha Underground?!  It’s Catrina, now going by Karla Perez.  Oh, yes, kids, business has picked up.

The missing piece to the puzzle for King Muertes has been revealed.#MLWFusion
▶️ https://t.co/Di9PyloFZy pic.twitter.com/NekdzC9JEc

As soon as the bell rung, Lawlor tries to fight away, but the match favors Muertes.  As the fight goes to the outside, Muertes slams Lawlor onto the casket.  Muertes then hits a short DDT to the casket lid, and inside the ring he gets a TKO to Lawlor.

Muertes rolls his body to the casket and tries to close the lid, but Lawlor fights his way out. Lawlor hits a basement dropkick to Muertes’ knee, and a then follows up with a vicious knee strike to the big man’s head. Lawlor tries to drag Muertes to the casket, but he’s just dead weight (thenkyewImhereallweektipyerwaitstaff).

Muertes fights out, and knocks Lawlor back down on the floor.  He then crotches Lawlor on the guardrail, and the look of pain says it all on Lawlor’s face.  Lawlor is still not out, and fights for his life and grabs a chair, but Muertes knocks him down.  Lawlor tries again with the chair, and it’s a swing and a miss, and then Muertes power bombs him right on the casket lid, denting it further.

Back in the ring, Muertes lights up Lawlor with chops to the corner, but Lawlor manages to nail a discus elbow, and a sleeper hold has the King of Death fading.  Lawlor rolls the big man and places him in the casket and still no dice. Lawlor punches away, and Muertes goes full Undertaker, grabs Lawlor by the throat and then goes to the ring for a scoop powerslam.  Muertes attempts a spear, but Lawlor transitions it to a guillotine choke.  It looks like Lawlor has a chance, but Muertes deadlifts (see what I did there) Lawlor, and powers up to a Straight to Hell flatliner finisher.

In the casket Lawlor goes, and closes the lid.

Perez and Muertes admire his handiwork as the show fades to black.

The show started slow and then built up from there.  Whether he’s Dario Cueto or Cesar Duran, he is perfect in his  role as a matchmaker offering the fans all the violence they can handle.  The casket match was a great touch, especially introducing Karli Perez back as the valet of King Muertes.  Slowly, the show is going back to the fun of Lucha Underground.

Alex Kane is impressing me as well, as Dobrowski called him a “suplex machine”, and I’m curious how a certain Tazmaniac would feel about that.  The Sea Stars/Nightingale/Skye match seemed to not have the sizzle tonight from the crowd, but it could be just a one-off.

Next week looks to be a doozy for the Opera Cup, and we’ll see you in seven!