AEW Dynamite: The Redeemer makes the most of his unexpected opportunity 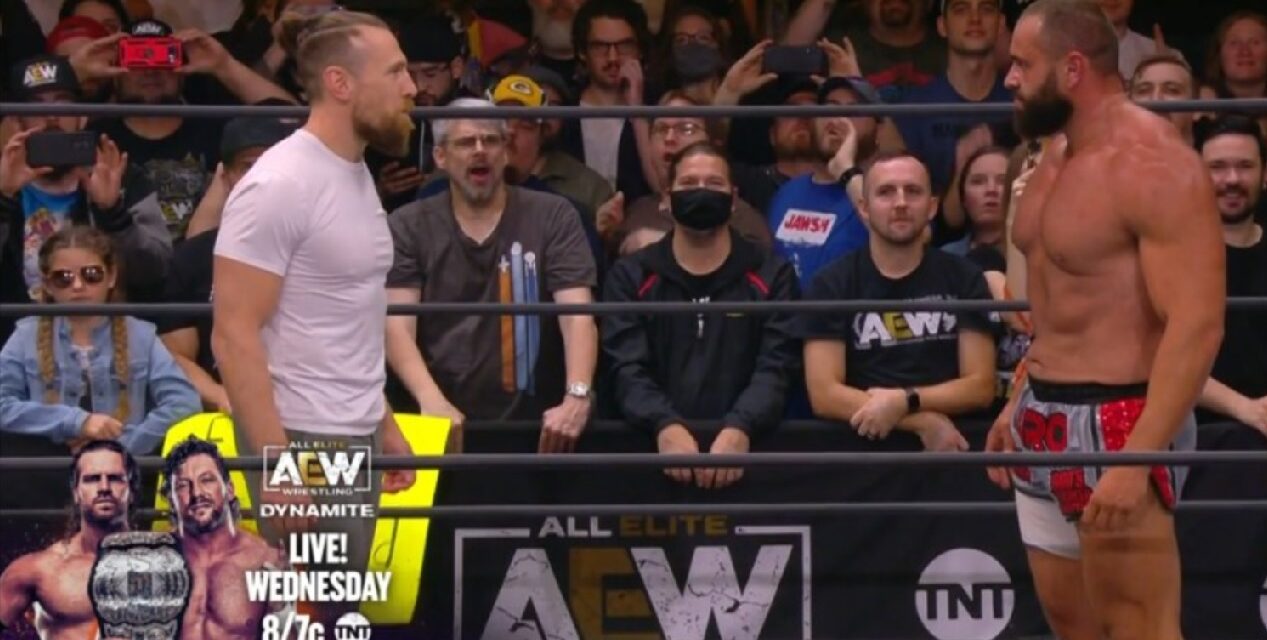 It’s somewhat fitting that AEW Dynamite is airing from the Show Me State tonight, because with less than two weeks until Full Gear, it’s time for AEW to show us every reason we should order the pay-per-view. The card as it stands now is already really nice, but more pieces of it should fall into place over the next two hours. Let’s dive in and see where they land, live on TNT.

Though we’re getting right into the action tonight, Excalibur takes a moment to pledge the entire promotion’s support for Jon Moxley as he goes through his recovery. He never mentions what Mox is recovering from, though it really doesn’t matter in this context.

The announce team reminds us that a while back, Engels gave the champ a much harder time than anyone would have figured, though that means Omega isn’t likely to take him lightly this time. Maybe Kenny is getting a little too confident about how he’s controlling this rematch, though Engels rallies out on the floor to hit several aerial moves and get himself back in it. He also kicks out of several big moves, but Omega eventually prevails.

Omega grabs the mic and says Engels embarrassed him before, elevating himself in the process. But the God of Pro Wrestling has the power to giveth and taketh away, and he asks Michael Nakazawa for a chair. He’s thinking One-Winged Angel on the steel, but Hangman Adam Page’s music hits and the cowboy heads for the ring. Engels snatches the chair from Omega, meaning the champ has to think fast to avoid the Buckshot. Page tells Omega he forgot his title belt and warns the champ to hold on tight to it, because he’s got 10 days. Let’s go!

Malakai Black uses a story about the assassination of Julius Caesar to get a point across about … actually I’m not 100 percent sure.

CM Punk is admittedly not in the best mood and asks if he can talk to the crowd seriously. He asks for the fans to chant Moxley’s name to show their support, and says he’d spend all night listening to that. Punk knows what it is like to give so much of yourself that you have to take yourself off the hamster wheel and was criticized for it, and he doesn’t want to hear anyone do that to Mix, because he’s damn proud of Jon. He also pleads for anyone who thinks they need help to ask for it, even if it isn’t easy. Punk then turns his attention to someone else who isn’t here tonight, Eddie Kingston. Since they can’t fight tonight, Punk says he’ll be in St. Louis on Friday to accept Eddie’s apology for interrupting him — and he implies that Kingston’s hijinks have kept him out of the AEW World Championship Eliminator Tournament, much to the chagrin of the fans.

Speaking directly to God again, Miro wonders if He has intervened on his behalf by putting him into the tournament or if He is toying with him. Miro says he will be champion and will be loved, and then He will be forgiven.

Adam Cole and the Young Bucks tell Alex Marvez that their loss to the Dark Order was a fluke and they are afraid of no one. They definitely aren’t afraid of a solo Christian Cage, but their tune changes slightly when Luchasaurus arrives. A fight breaks out, and the numbers are in favor of the Superkliq until Jungle Boy comes flying off the stage with a somersault to even the odds. Luchasaurus chokeslams one of the Bucks onto Cole’s back, and Jungle Boy puts him to sleep with the Snare Trap. Cage gets a pair of chairs, and everyone knows what’s coming next. A Con-Chair-To to Cole leaves him twitching, which is an emphatic statement by the faces.

Kris Statlander and Ruby Soho express their mutual respect before they meet in the TBS title tourney.

Not sure if no flips will cut in while defending the AAA titles, though considering how Aero Star nearly crashes and burns on a move to the floor, maybe there’s something to be said for that after all. Darby Allin is watching from somewhere dark in the building as well, although probably not with an eye toward getting in on this title hunt. Props to FTR for their work in one of the fastest paced matches I’ve ever seen them in, and they retain thanks to a grab of the ropes while going for a pin.

As Tony Schiavone presents Hikaru Shida with her plaque for getting to 50 wins, she is mock congratulated and threatened by Nyla Rose.

Chris Jericho leads the Inner Circle out to see which members of American Top Team will face them at Full Gear. In fact, since Sammy Guevara won his match last week, it seems they get to pick, and they won’t have to wait long as Dan Lambert leads ATT out onto the stage. He runs down the credentials of his fighters before Jake Hager chooses Junior Dos Santos, Santana selects Andrei Arlovski, and they tease Paige VanZant joining in as well. But Jericho gets the last pick, and he chooses … Lambert, based on his comment earlier that he was the No. 1 member of American Top Team since he started the gym. Welp. Have fun with that, Dan.

Jay has a lot working against her, including an injured shoulder and the presence of Dr. Britt Baker and Rebel in Hayter’s corner. I have to be honest: I don’t like her chances. Sure enough, some interference sets up Hayter’s big running lariat, and she’ll advance to face Thunder Rosa.

Tay Conti runs down to prevent a post-match beating, teasing her title shot at Full Gear. The numbers wear her down as well, but Rosa hustles down and finally gets the heels to bid a hasty retreat.

Who will Jade Cargill face in the TBS tournament? She and her manager say it doesn’t matter. She plans on winning the title and renaming the belt “That Bitch Show.”

MJF calls for his music to be cut so he can talk directly to Allin. He gives Darby some credit as having “it,” which will make both of them legendary. But MJF wonders, why do the fans cheer Allin and boo him? He thinks it’s because he reminds the fans of the more successful people they can’t be, while Darby reminds them of themselves. The people love him because he’ll never fit in and he’ll never win. At Full Gear, MJF maintains that he will win because Allin is too mentally weak and will be too concerned about battering him instead of beating him. Allin says they will have a wrestling match at Full Gear because he’s going to get his anger out tonight. MJF tries to leave but finds himself confronted by Sting and some masked men. The Pinnacle comes to MJF’s rescue, but Allin finds Max and they brawl into the crowd. Allin calls for the fans to part so he can launch himself into a huge clothesline that takes both men back to the ringside area. MJF finally flees into another part of the crowd, but man, this rivalry is going to be hot for Full Gear.

It’s interesting to see this feud come together ahead of Full Gear, but perhaps they are saving Rhodes vs. Black for the pay-per-view since their issues have been running even longer. Jim Ross notes that despite careers that have taken them around the globe to great success, these men have never wrestled each other until tonight. El Idolo’s assistant Jose tries to get involved but is neutralized by Arn Anderson, but FTR is also lurking to hit Cody with their title belts. Andrade gladly accepts that aid and covers for the three count.

Schiavone talks to John Silver ahead of his match with Adam Cole, or as he calls him, Budge. He vows to kick some Budge ass on Rampage on Friday, and the announcers run down the rest of the Rampage card.

Bryan Danielson comes out to join the announcers as a very interested observer, and we see what went down last week between Kingston and Punk again.

There are less than 10 minutes left in the broadcast, and the announce team is selling the damaged ribs of Cassidy, so I might be leaning toward Miro here even though he was a late addition to this tourney. Sure enough, Cassidy’s first attempt to fly to the floor backfires as Miro catches and throws him. Cassidy does rally after the commercial break as he always does, and even hits the Beach Break, but soon ends up floored by a big lariat. Miro locks in his finishing hold and Orange quickly taps out.

Danielson enters the ring to do a little staredown with Miro as my feed cuts out. Hopefully nothing really exciting happened in those last few seconds, but in any case, see you in seven!

A solid if not spectacular show tonight, one that did its job highlighting some of the top feuds for Full Gear: Omega-Page, MJF-Allin, and FTR-Lucha Bros. among them. AEW also turned some last minute booking into something intriguing, as Miro is a much different threat for Danielson than Cassidy or even Mox would have been. I’m curious to see where this goes even if I fully expect the American Dragon will still go over.