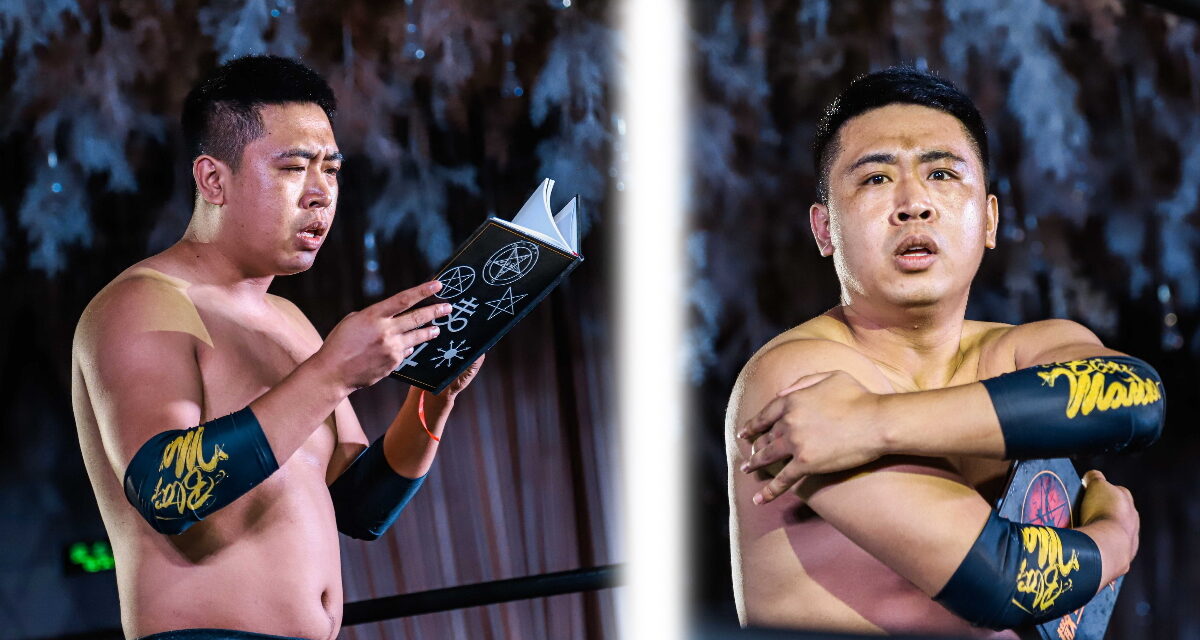 The show starts with a cold open promo from Steve the ESL Teacher who says we will beat his former pupil Wang Tao’s ass in their “Classroom Rules Match” tonight.

Poseidon and the kid start but Kid immediately calls for the challenge of the bigger Plata. Plata’s strength is too much for the comical Kid, when he tags out to Poseidon, he has an early advantage but Kid stops him with a reversal off the ropes into a facebuster.  He and PHX make quick tags to keep control of Poseidon.

Poseidon turns things around with a jawbreaker, then locks in a figure four sleeper and then gets one from the illegal kid. Plata enters and grabs PHX in a Boston Crab turning over all 3 others. This allows Poseidon to reverse the subsequent double teams into a tag opportunity. 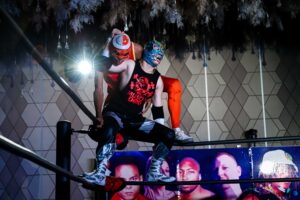 Poseidon hooks up Curry Kid for a stunner.

Plata enters, plowing down Kid then the two make quick tags that allow for respective top rope attacks. A body slam on the smaller Poseidon grants Kid access to the top rope but he gets stopped with a palm strike then finished by a super stunner by Poseidon.

MKW Champion Coldray appears backstage in front of a graphic for he and Little Johnny’s team of “The Supreme Society” saying that he has proven that he is better than Zombie Dragon and we’ll never see Zombie Dragon again on MKW Blast-off. Next week he will introduce a new concept to the world .. it will be called “The Coldray Games”

Honwan makes his way to the ring in a strange combination of wrestling training gear and street clothes. He grabs the mic and addresses Black Mamba for interfering in his match last week. 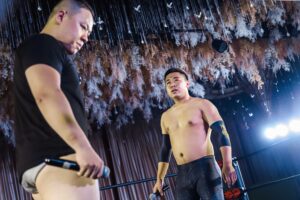 Mamba enters and explains that he has to come out tonight because of what happened last week in his MKW Belt & Road championship match against Ash Silva. Honwan asks Black Mamba to the ring and explain why and how he has changed so much, especially since they’ve known each other for so many years.  Even trained together in 2015. Wan begins to turn his back when Mamba attacks him from behind. He takes Wan’s glasses and says he’s not blind to the reality of pro wrestling and its relationships before exiting to collect his familiar torture tools under the ring. But not only does he find his kendo stick and chair but also a bodybag from last week. On a lark he opens it and finds Zombie Dragon’s occult book (I thought Cold Ray took it and burnt it last week?). He opens it and then we cut to a CG rendering of the contents of the book. In it are illustrations of demons seemingly, including Zombie Dragon. The following pages include another picture of Dragon and text reading how to resurrect powerful demons, including Zombie Dragon.

Mamba is so disturbed as he reads “Satanic Temple” that he completely ignores his objective of attacking Wan to instead speak directly to the camera while pointing out the book’s message.

Wan has left the ring and is seated on the ramp shakes his head in disapproval looking on, then slowly drags himself butt first to the back.

As they feel each other out early on, Buffa edges out the advantages allowing him to hit his trademark elbow and fist drops for early near falls. A lucky kick by Dog as Buffais jumps up on the ropes gives the Irishman the advantage as Buffa takes a spill to the floor.

Dog teases the fans before sending Buffa in the ring to continue his methodical control. Buffa does a good job of showing fight until a backdrop allows him to turn things around. After a backflip dropkick nearfall, Buffa’s comeback culminates in scaling the top rope but Dog intercepts with a superplex for two. 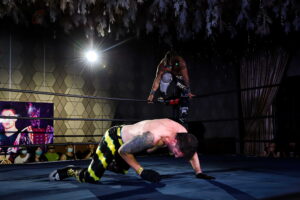 Buffa is perched on the top rope as Mad Dog Connor gets to his feet.

By holding onto the ropes during a snapmare attempt Buffa is able to finally successfully jump off the top for his super X factor finish.

In this match any classroom related objects are legal.

Steve begins the match seated in the corner clutching a knapsack as Tao looks on coldly. They then circle and lock up and Steve takes an arm. I thought they hate each other? Steve goes for a quick majestral cradle win attempt off an arm bar. Last week he pulled Tao up out of potential 3 counts. I don’t understand his motivation here.

They go back and forth with their respective strengths of speed vs power and experience giving them the advantage. After a blatant eye rake Steve goes for the bag. He beats Tao with a variety of objects from it including a book, globe and pencil case etc. 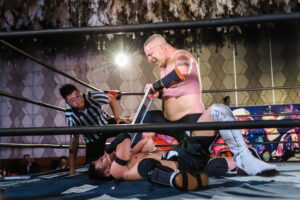 Steve the ESL Teacher chokes Wang Tao with the white board.

As he charges with a clip board Tao turns the tables and continues to beat him in the corner. A splash and enzugiri get him a nearfall but the clip board once again gets Steve the advantage. He continues the beating with a ruler and white board.

Steve escalates things with a glass bottle! As he goes for the hit Tao low blows him and attempts to grab it but it shatters in his hands. He lights Steve up with fists, stacks the boards on him and then hits the splash again for the win.

MKW sure does take chances with their outside of the box stories. Execution isn’t always perfect but it entertained me.