AEW Rampage: Danielson and Kingston tear it up; Britt and Abadon scare it up 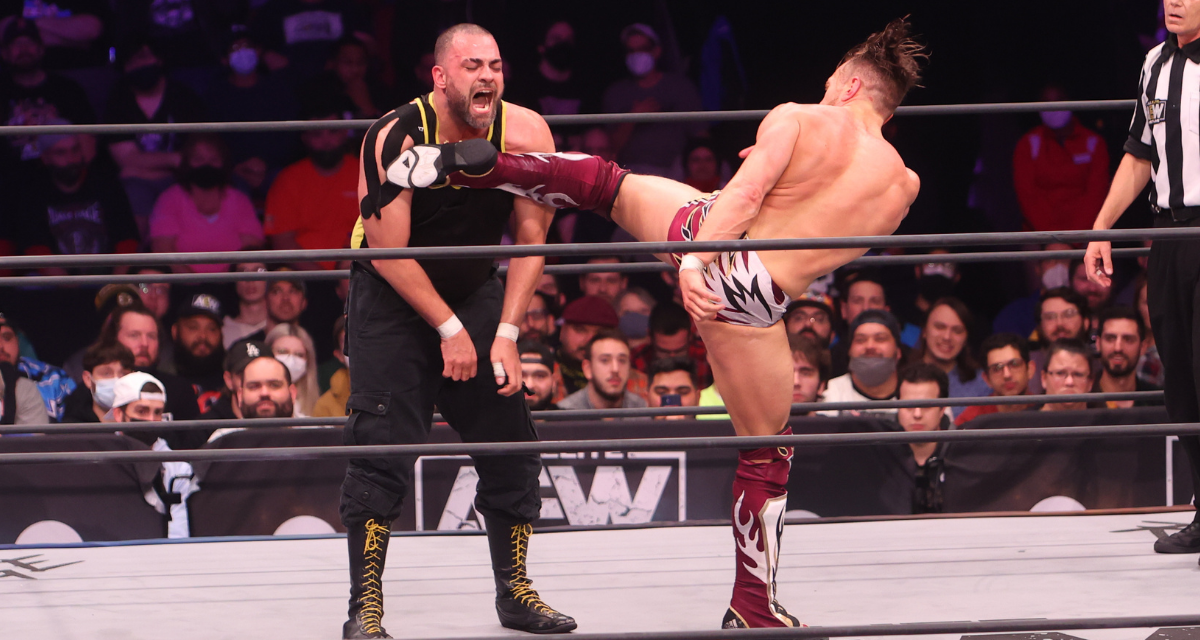 At only an hour long, AEW’s Rampage show is generally one of the better shows to watch every week. First, because of the short run-time, it’s mostly packed with matches with very little filler – and even if the matches aren’t great, well, they don’t go on too long. Second, because more often than not, the show kicks off with one of the company’s more talented names that will put on a good match, like CM Punk or Bryan Danielson. In fact, if they shaved it down to just the first half-hour, this might be a perfect show. Certainly that was the case this week, as the opener between Bryan Danielson and Eddie Kingston was a fantastic match – and everything after that was diminishing returns.

These two told a great story based on their clash of styles, with Danielson being the master technical expert and Kingston a street-wise brawler. Throughout the match, Danielson would try to out-wrestle Kingston, or hit and move with kicks that allowed him to keep his distance. But Kingston would fight his way through Danielson’s defenses, and when he did, he would batter Danielson with chops, punches, and other vicious shots.

Kingston’s primary weapon of choice was a series of chops, and he hit those several times, to the point that Danielson’s chest looked like raw, bloody hamburger by the middle of the match, and progressively got worse.

Eventually, the match went to the floor where Kingston had the advantage. He blasted Danielson with a huge forearm and a suplex, and there was a great tease of a count-out when Danielson actually fell down at the 9-count and had to make a desperate leap into the ring right as the referee counted 10. That was fantastically timed and very dramatic.

Things escalated when they were both back in the ring. In a great sequence, Kingston’s attempts at a Superplex and then a Frankensteiner were thwarted, and it ended with Danielson slipping through and dropping Kingston with a nice Belly-to-Back Suplex off the top. Another spot saw Kingston drop down to avoid a Flying Knee, Danielson stopping short and trying for an arm submission, but Eddie countering that and hitting a sweet DDT.

After another exchange of blows, Kingston dropped Danielson with a spinning backfist, but was too exhausted to capitalize. He crawled over, but Danielson locked on a Triangle Choke, and while he had Kingston trapped, Danielson hit a series of 12-to-6 elbows to Kingston’s head. Kingston was defiant, flipping Danielson the bird while taking the beating. But eventually, he passed out from the beating and the ref stopped the match.

.@MadKing1981 is out! @bryandanielson punches his ticket to the finals of the #AEW World Title Eliminator Tournament…What a match – Tune in to #AEWRampage NOW on @tntdrama pic.twitter.com/FKfHP0eiG2

This was great. This was the perfect example of less being more. Because other than one or two high spots, they really just told the story with hard-hitting, real-looking moves – and a master-class of selling those moves, by both of them. Go out of your way to watch this. And not just as a fan – most of the roster should take this advice as well. 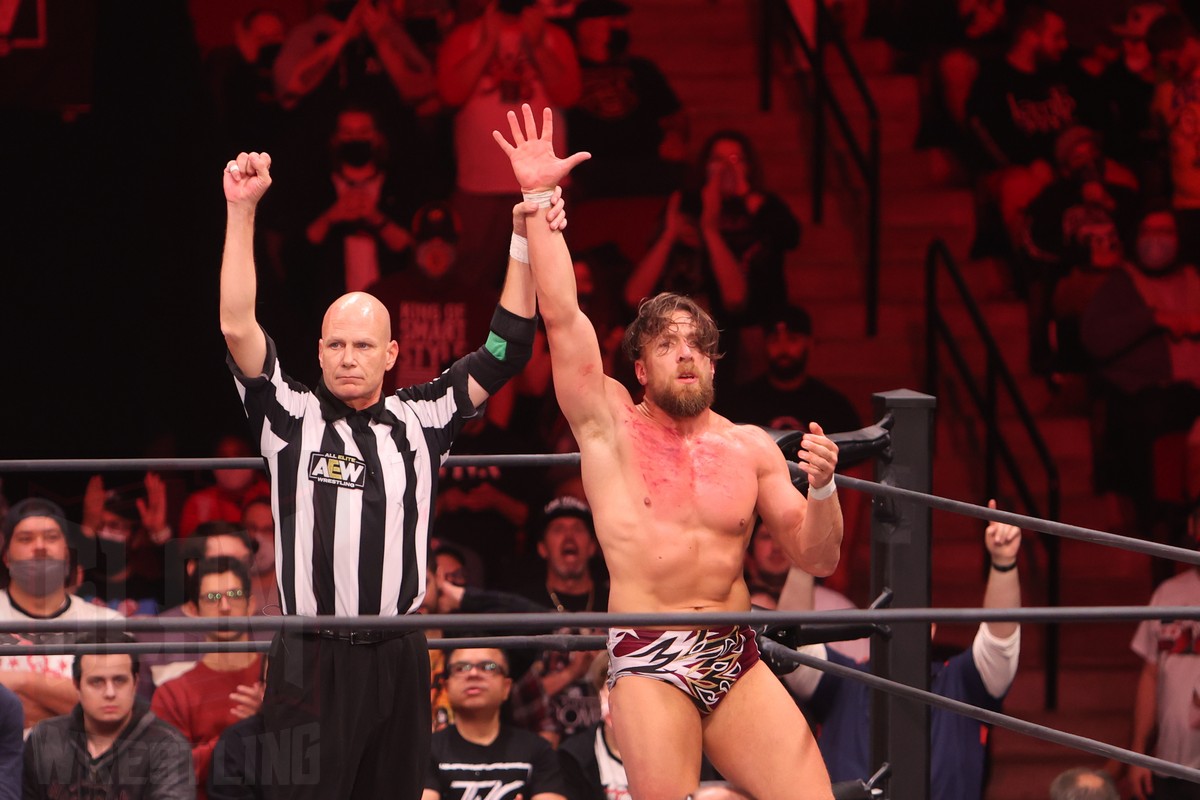 Bryan Danielson paid a price for his win. Photo by George Tahinos georgetahinos.smugmug.com  MORE PHOTOS IN THE GALLERY!

Back from commercial, they showed that Danielson had offered a handshake to Kingston, but Kingston refused and left the ring.

Tony Schiavone was interviewing CM Punk, but they stopped because down the hall, Kingston was screaming, frustrated by his loss. Kingston stormed up to Punk and got in his face and they exchanged harsh words. They started yelling at each other, but before things could get physical, security and some other wrestlers pulled Kingston away.

This was the third match between these two, and the commentators speculated whether Martin’s new alliance with Rush would be enough to help him finally get a win after losing in their last two encounters.

They did some gymnastics to start, and then Dante hit a nice Springboard Dropkick and a big Moonsault to the floor. Dante threw Sydal back into the ring and they did some less flashy stuff, including a nice crab-style submission by Sydal. Sydal dodged a dropkick and then went back to some submission attempts, working over Dante’s legs and back.

Martin fired up and came back with some punches and an Enziguri, but then ate a Jumping Heel Kick to the face. Sydal then hit a Standing Corkscrew Moonsault and nearly got the pin. Dante came back again with some razzle dazzle moves and flattened Sydal with a Jumping Stomp.

That spring though from @lucha_angel1 – Tune in to #AEWRampage NOW on @tntdrama pic.twitter.com/zuFrpRBN4J

Dante got caught going up top and Sydal took him down the hard way with a Frankensteiner. They did some more gymnastics, which Dante got the better of, and then Dante hit a Double Springboard Moonsault for the pin.

This was fine. The heel-face dynamic was a bit weird, since both of these guys have a style that screams good guy. And Lio has a personality that screams jerk – so should Dante be the bad guy? Because the story of the match seemed the opposite, as did the ending. 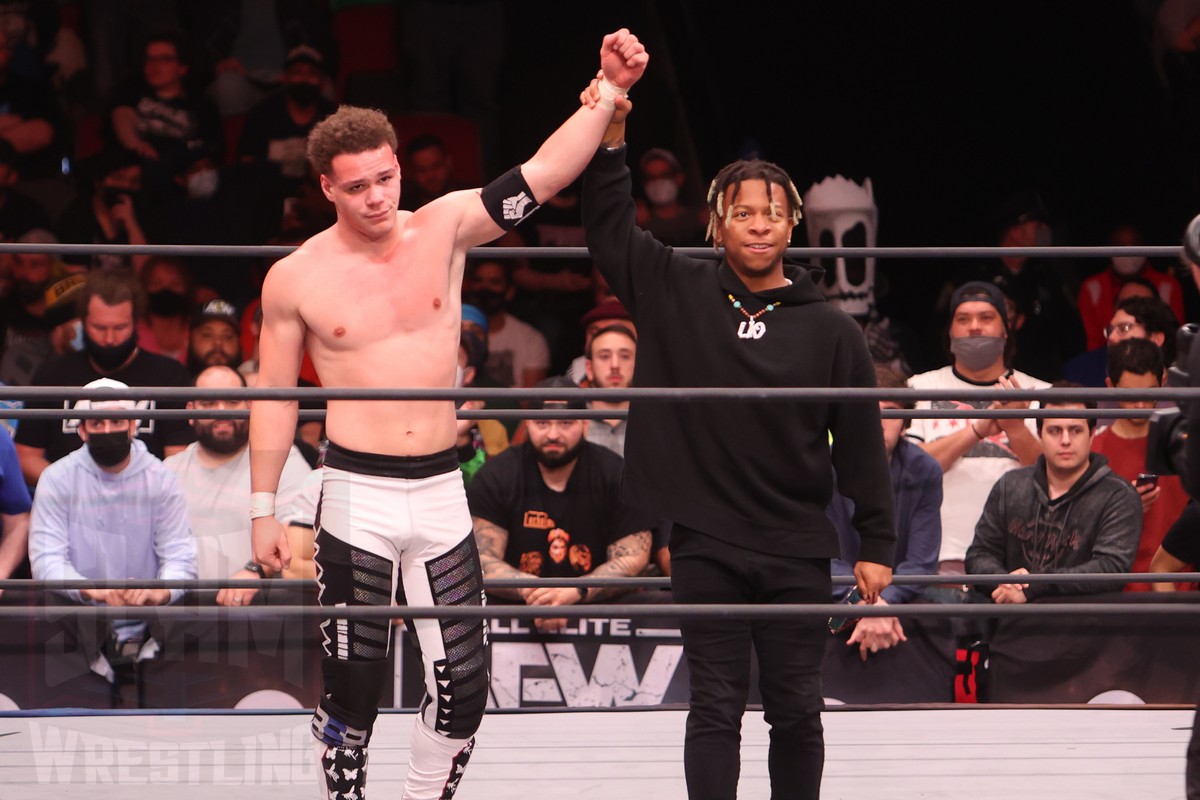 Dante Martin is joined by Lio Rush at AEW Rampage. Photo by George Tahinos georgetahinos.smugmug.com  MORE PHOTOS IN THE GALLERY!

Mark Henry did a video interview with the competitors in the next match, Abadon and Dr. Britt Baker, who was with her posse, Rebel and Jamie Hayter. If Abadon wins their Trick or Treat match (i.e. No Disqualification match), she earns a title shot against Baker. Henry asked Abadon if she had something to say, but she just spat blood, which freaked everyone out, and then Abadon abandoned the interview.

Does @abadon_AEW have @RealBrittBaker spooked? The MAIN EVENT #TrickOrTreat Match is next! The Trick: No DQ! The Treat: Abadon gets an #AEW Women’s World Title shot if she wins. Tune in to #AEWRampage NOW on @tntdrama pic.twitter.com/Z7mmUmEgNX

Immediately, Abadon hit a Stunner on Baker, who rolled to the floor. There, she directed her posse to get a table from under the ring and set it up, and the show went to commercial. When we came back, Abadon was in control and hit a chair-assisted senton splash on Baker. She tried to follow up, but Baker hit her with a leg sweep and sent Abadon face-first into the turnbuckles. Baker’s crew pulled Abadon out of the ring and tried to set her up on the table, but Abadon escaped. She climbed up to the apron, and Baker hit her with a Twisting Neckbreaker off the apron and they crashed onto the table, which didn’t break. Baker then Suplexed Abadon onto the table, and again it didn’t break. 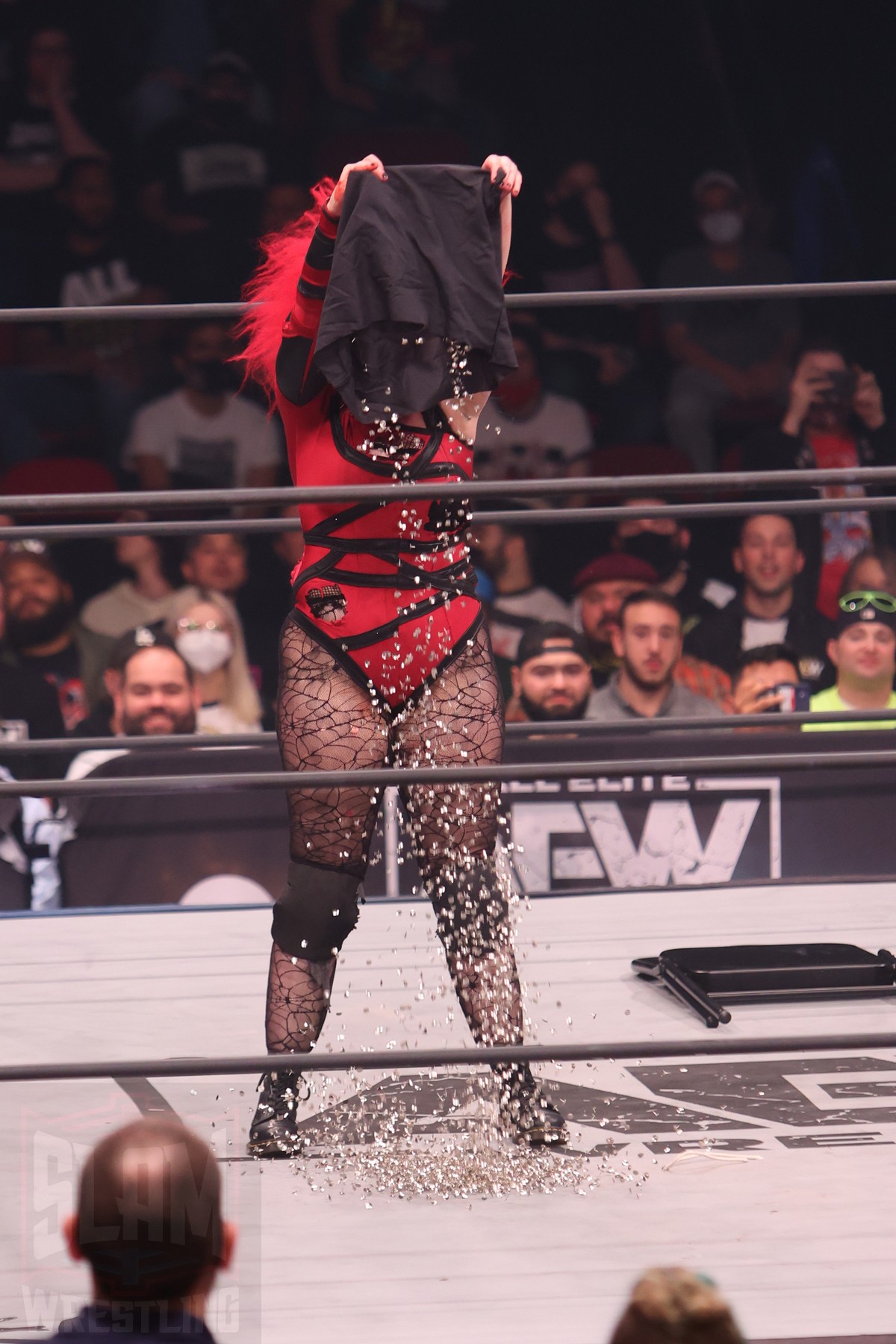 Abadon lets it rain thumbtacks in a Trick or Treat No Disqualification match. Photo by George Tahinos georgetahinos.smugmug.com  MORE PHOTOS IN THE GALLERY!

Hayter slid a chair into the ring, and Baker grabbed it and whipped it into Abadon’s face. She then put Abadon’s neck in the chair and Pillmanized her neck. But Abadon popped back up again.

Baker slammed Abadon’s face into the mat, then grabbed a handful of tacks and shoved them into Abadon’s mouth and kicked her in the face. She tried for the Lockjaw, but the zombie Abadon tried to eat her hand so Baker released it.

That’s one way to counter the Lockjaw – Tune in to #AEWRampage NOW on @tntdrama! pic.twitter.com/rAfuDOEYd3

Hayter and Rebel climbed up to the apron, and Abadon took the bait. She went after them and Baker came up from behind her and got the roll-up win.

Abadon’s gimmick works for a Hallowe’en show – though in any other situation, it’s way too cartoonish a character. That said, putting aside the backwards booking – i.e. the challenger first has to win a gimmick match in order to win a title match? – this was fine. Not particularly mind-blowing – indeed, Baker has had better hardcore matches in the past that were much more memorable than this one – but fine.

This was really a one-match show, but, boy, what a match. Danielson vs. Kingston was terrific, and it would be great to see these two go at it again sometime. The main event was a decent spectacle, but since Abadon is such a one-note character, there was really no drama since the outcome of the match was obvious.