Smackdown: King Woods and Sir Kofi reign over the Usos 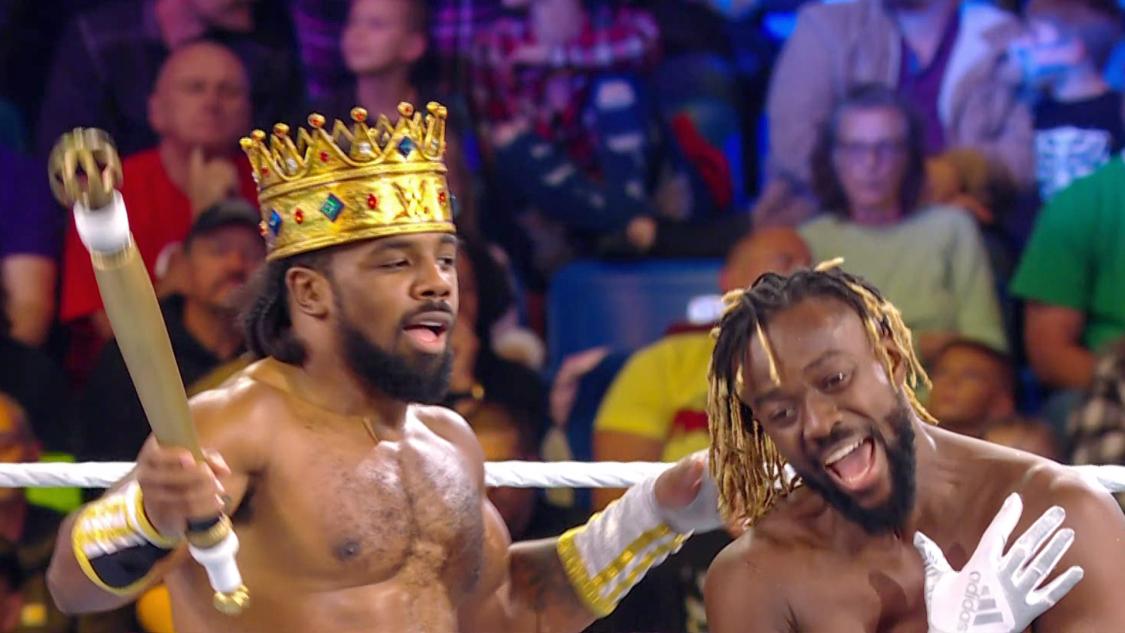 The WWE draft is finally official but the transition of superstars to their respective shows has not been smooth. Looking in your direction, Charlotte Flair. By now, everyone knows of that the swapping of Women’s title belts did not go as planned. It seems everything has worked out, though. It’s also the final show before Halloween, so expect to see some holiday nonsense. Onto the show.

Charlotte Flair kicks off the show. In the ring she goes on about how she is the best. She’s the face of the women’s division and the company. Sasha Banks interrupts her, wanting a shot at the title. Flair claims this is a new era of Smackdown and wants to give someone else a chance.

Enter Shotzi Blackheart on her tank. Flair likes that she is ready for battle and grants her  match.

Sasha sticks around at ringside to watch and I’m sure she won’t come into play in this match. Shotzi get a near fall early with a sunset flip off the turnbuckle. She connects with a springboard hurricanrana, but it’s not enough to get a pin. Flair rolls to the floor, becoming preoccupied with Banks. Shotzi connects on a suicide dive. After a superkick on the floor, Banks pleads with Shotzi to roll Flair back into the ring for a cover. Charlotte still kicks out at two. Flair reasserts her dominance, smashing Shotzi into the turnbuckle. But Flair can’t connect on the moonsault. Bank jumps to the apron, but Shotzi can’t capitalize on the distraction. Flair catches her with a forearm and follows with Natural Selection. Flair covers to get the three count.

After the match, Banks tries to console Shotzi, who instead blames Sasha for the loss. Shotzi blasts her in the back and proceeds to beat her up in the ring. Shotzi slams Banks in the tank and ringside barrier. She finishes her off with a back senton.

Jeff Hardy tells Kayla Braxton that he is excited to be back on Smackdown. He is interrupted by Happy Corbin and Madcap Moss. Hardy isn’t amused by the duo.

Adam Pearce addresses the Brock Lesnar situation from his home. Pearce suspends Brock and fines him ONE MILLION DOLLARS!

Paul Heyman watches from back and is approached by Kayla Braxton. She wants to know how Brock will respond to the suspension and fine. Paul tells her that Roman Reigns would ignore the suspension and beat up everyone, especially Brock Lesnar.  Heyman finally relents and answers the question. He says Brock would rip out everyone’s throat. Paul realizes he is getting a tad too excited and scales back the enthusiasm.

Drew McIntyre wants to fight and issues an open challenge to anyone in the back. Mustafa Ali answers the call, claiming he is better than Drew.

Ali chops away at Drew with no effect. One chop from McIntyre sends Ali to the mat. Mustafa is launched across the ring with a release suplex. Ali blocks the Future Shock DDT and sends Drew into the ring post shoulder first. McIntyre avoids a moonsault, but whiffs on the Claymore kick. Drew blocks a DDT and counters with the Future Shock DDT into a Kimura lock. Ali taps out.

After the match, Ali has to get something off of his chest. He isn’t pleased people root against him. He plays the race card, claiming people only root against him because of his name.

Backstage, King Xavier welcomes Hit Row to Smackdown. Kofi wants them to spit some of that “hot fire” for their king.

King Woods is in the ring to knight his friend and tag team partner, Kofi Kingston. He asks Kofi to bend the knee and officially knights him Sir Kofi Kingston, the hand of the king. The Usos crash the ceremony. Woods decrees that they will face the Usos in a trial by combat. Kofi stops the Usos from touching the royal scepter.

Ah, here’s the holiday nonsense. Jack-o-lanterns line the ring, there are skeletons in every corner and there’s an apple bobbing station on the floor. Boogs grabs his guitar to riff, so Corbin hits him with a kendo stick. 24/7 champion Reggie leaps into the ring as the lower card gives chase. Reggie runs out just as fast as he ran in. Moss is forced to bob for apples after a kendo stick shot from Nakamura. Corbin force feeds Boogs a handful of candy. Boogs goes a pumpkin smashing spree to save his partner and then beats Corbin with a skeleton. Happy gets double teams with a gut wrench knee strike, but Moss makes the save. Nakamura wants the Kinshasa but gets a pumpkin placed on his head. Corbin and Shinsuke fight into the time keepers area. Boogs goes up top only to be attacked by two masked men. Moss with a neck breaker after a pump kick and covers Boogs to get the win.

Those masked men were Humberto Carrillo and Angel Garza.

Megan Morant asks Sonya Deville about the match between Naomi and Shayna Baszler and if she is biased. Sonya denies any bias, but is interrupted by Sami Zayn. He is upset he isn’t on the show.

There’s no referee for the match. Sonya Deville explains that the referee scheduled for this match was injured in Brock Lesnar’s attack last week. So Sonya is filling in. Naomi fights her way out of getting locked in multiple submission holds. Naomi with a head scissors and slams her into the turnbuckle. Naomi slips off the top rope but is able to hit a clothesline. She pins Shayna but Sonya refuses to count. Baszler reverses the pin and Deville makes a quick count. She calls for the bell.

Naomi tries to protest but Baszler locks on the Kirifuda Clutch.

Kayla asks King Woods if he feels his crown is being threatened. Woods as all the faith in his hand, Kofi Kingston.

Backstage, Naomi obviously isn’t happy. She will be waiting for Deville whenever she gets back in the ring. She also has words for Shayna Baszler.

The New Day vs. The Usos

Kofi with a springboard drop kick out of the corner. Kofi goes for the trust fall, but the Usos catch him and toss him into the time keeper’s area. After an early commercial break, Kofi kicks out of a pin by Jimmy. Jey crushes Sir Kofi in the corner with a hip attack. Kofi explodes out of the corner with a leaping kick and King Woods gets the tag. He takes the fight to Jimmy, taking him down with a side Russian leg sweep. Woods with  knees to chest, but it’s not enough for a pin. Jey tags in, hitting a neck breaker. Woods with a forearm shot. Kofi gets the tag. Jimmy ducks Trouble in Paradise. Kofi takes a double superkick, but kicks out of the pin. The Usos go up top, but Woods drags Jey off the turnbuckle. Kofi gets his knees up on Jimmy. Woods makes the tag as Kofi gets super kicked. Jimmy covers Kofi, but Woods is legal. The King rolls up Jimmy, getting the three count.

The reign of King Xavier continues to go strong as he knights his friend Kofi Kingston on tonight’s Smackdown, and I am here for it! They also put on another banger of the match with the Usos. There’s no Roman Reigns on the show tonight, but he has earned the break. The Halloween themed street fight was fine for what it was. All in all, tonight was a solid Smackdown even if there wasn’t anything that was must watch.