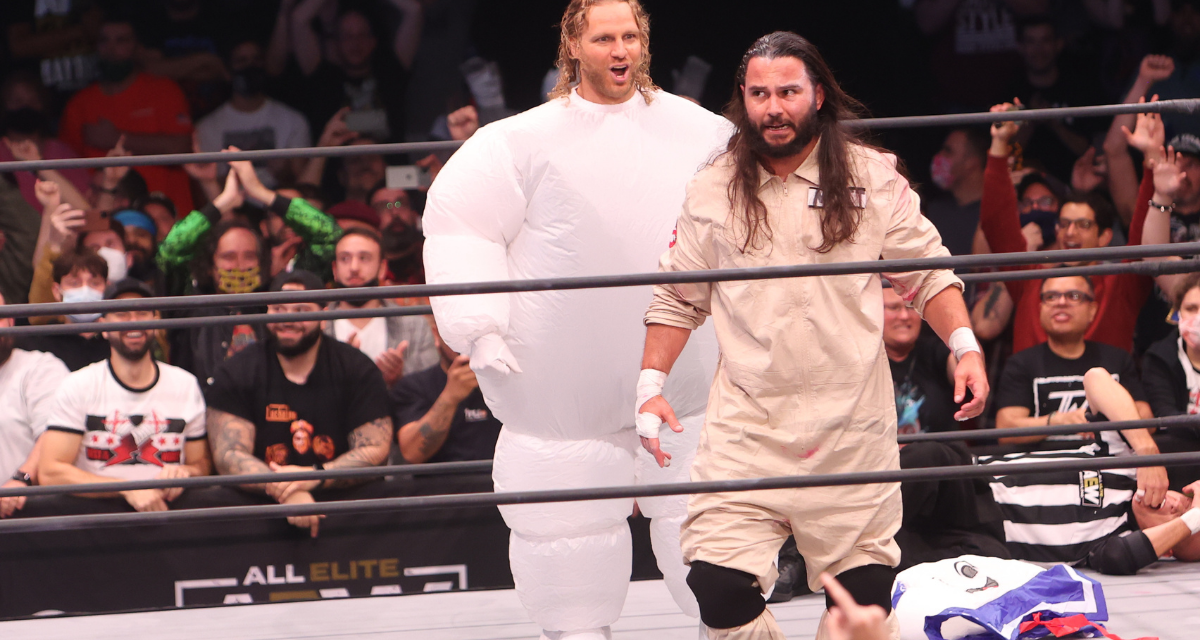 Spooky SZN is approaching its peak this week, but there’s nothing scary about Dynamite returning to its normal Wednesday night time on TNT tonight. CM Punk will be in action, the men’s and women’s tournaments will continue, and the 10-man main event should be entertaining. Let’s ship up to Boston, to Agganis Arena, for two more hours of Dynamite.

It’s still a little strange seeing the AEW announcers promote NHL games on TNT, but as a hockey fan, I dig it. The narrative here is that Fish is already bullying lower card guys since arriving in the promotion, so Punk is using his in-ring Dynamite debut (no, really) to teach him a lesson. Punk sells damage to one of his legs throughout, essentially hopping off one foot to deliver a top-rope elbow. But you know he’s winning this to stay undefeated, and indeed he does, scoring with the GTS to wrap things up.

Though Malakai Black lost the battle against Cody Rhodes, he still believes he will win the war. After all, he’s made Cody’s own family lose faith in him, and in the end, the house always wins.

This is as squash as squash gets, with MJF winning in a matter of seconds.

The quick bout gives MJF a chance to do what he likes to do most, dissing the people and sports teams of Boston before turning his attention to Darby Allin. He also has his eyes on the AEW World Championship, declaring he doesn’t care who wins at Full Gear. MJF has more fun with the crowd, teasing Sting’s arrival with his music and then laughing about it. He isn’t laughing a minute later when the lights go out, and it’s not Shawn Spears’ doing. Sting appears in the ring, baseball bat in hand, but when MJF thinks he’s safe on the floor, he discovers a person dressed like the Invisible Man (O.G. version) is actually Allin just testing out some cosplay. Darby makes it clear the two of them will collide at Full Gear. 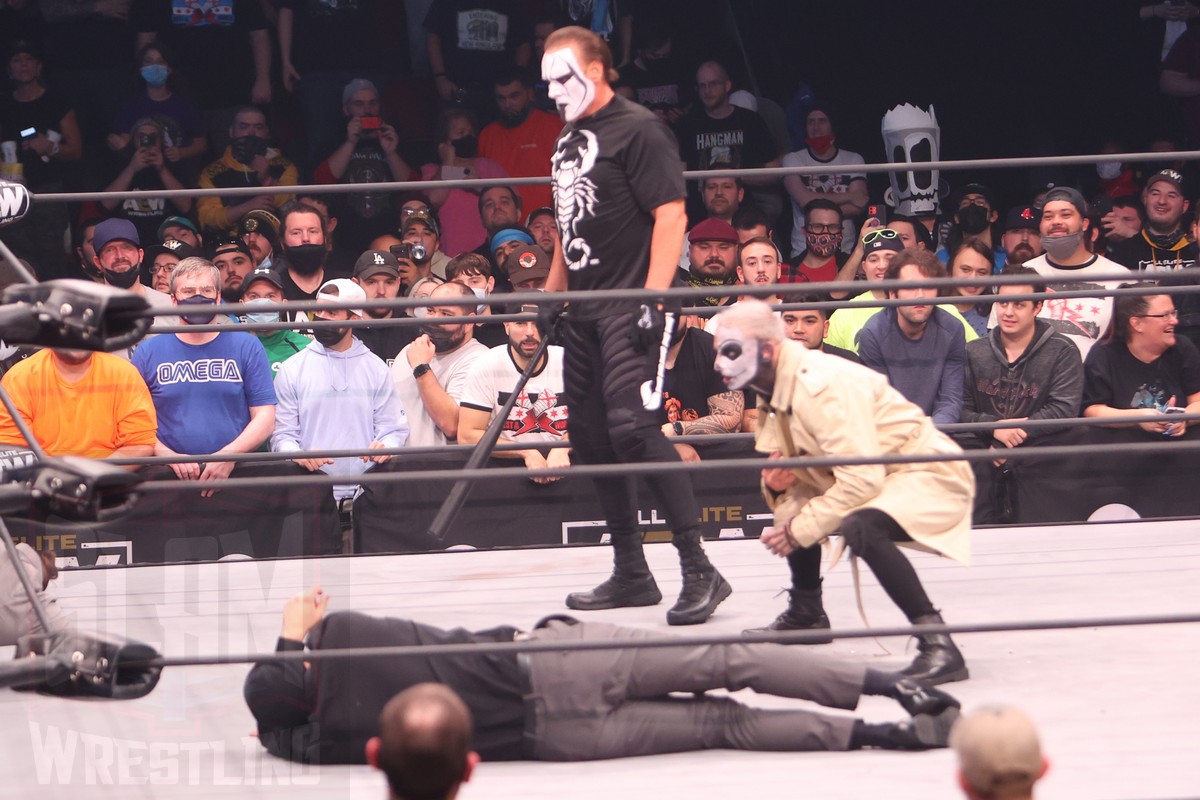 Sting and Darby Allin at Agganis Arena, in Boston, MA, on Wednesday, October 27, 2021. Photo by George Tahinos, https://georgetahinos.smugmug.com MORE PHOTOS IN THE GALLERY!

Tony Schiavone gives Britt Baker some bad news: She has a Trick or Treat match with Abadon on Rampage, and if Abadon wins, she gets a title shot. The good doctor initially protests but decides a moment later that she is unfazed.

Not content to wait for the bell to start the match, Guevara literally launches himself at his challenger, and not just once. The pace remains high through the side by side commercial break, including a fun standing Spanish Fly by the Spanish God. The final sequence is also great, with Guevara eventually retaining. Page and Scorpio Sky don’t even wait 30 seconds before assaulting Guevara after the bell, but the assembled Inner Circle swoop in. And is that premier athlete Tony Nese watching from the crowd? Indeed it is.

Because Sammy won, Chris Jericho reminds the Men of the Year that there will be a 10-man tag match at Full Gear. One one side will be the Men of the Year and three members of American Top Team (we’ll find out which ones next week), and on the other, the reunited Inner Circle. Place your bets, if you’re into that sort of thing.

Backstage, Schiavone talks to upcoming tournament opponents Bryan Danielson and Eddie Kingston. The Mad King takes some offense to Danielson’s assertion that Kingston doesn’t work hard, noting that he has to fight through depression to do what he does. He’s fired up enough that he ends up walking out, but that’s exactly the Eddie Kingston the American Dragon wants to see.

The Lucha Bros. haven’t forgotten how FTR got one over on them, but they’re willing to put up their AEW belts to get some payback. That’ll happen at Full Gear, naturally.

Shida is looking to become the first woman wrestler with 50 wins in AW, and she seems especially fired up as aa result. Her strikes are met in kind by Deeb’s always impressive array of holds and submissions, and the crowd gives the women the “this is awesome” chant as a reward. Deeb considers cheating to win, but she almost wins legitimately as well, until Shida reverses a pinning attempt to get the three count and the plaque for earning that 50th dub. 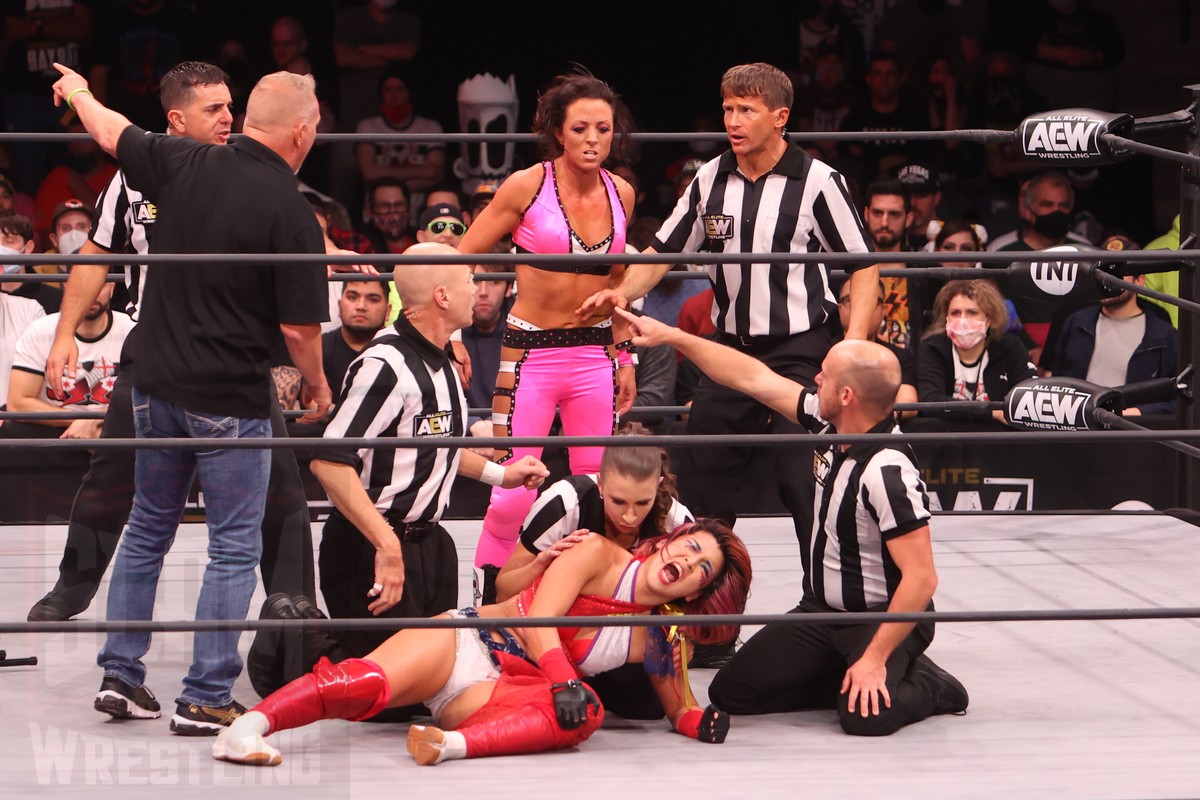 Even though an injury to Mike Sydal will force Lio Rush to delay his in-ring debut, he’s still ready to help Dante Martin defeat Matt Sydal in their third confrontation. Dante, as he has of late, looks uncertain about all of this.

Mox shows off some typical brutality, tearing open the front of 10’s mask, biting him and sending him face first into a ringpost. It’s not surprising that 10 is busted open, and then he ends up looking at the lights as Mox continues his rampage through this tourney.

Getting the other side of the story like a good backstage interviewer, Schiavone talks to FTR about their title shot. Tully Blanchard says FTR has hit the reset button, so Lucha Bros. better watch out.

Receiving more boos than usual, Cody Rhodes comes to the ring to explain more about his current mind set. He throws his sneakers to the crowd while explaining that he lives in the shadow of his father, his brother and even his wife, so he won’t ever take the easy way out. So if anyone thinks he got a little too Hollywood, he apologizes to them, including the fans, everyone in the Nightmare Family, and especially Arn Anderson. Someone is going to interrupt at some point, and tonight it just happens to be Andrade El Idolo. He offers to make Rhodes his little bitch, the lights go out, and Black is now in the ring to help Andrade attack Cody and Arn. Pac hustles down to even the odds, which he does with gusto. Andrade and Black retreat, but briefly try to run back down when Pac mocks Black’s cross-legged sitting pose with both middle fingers raised. 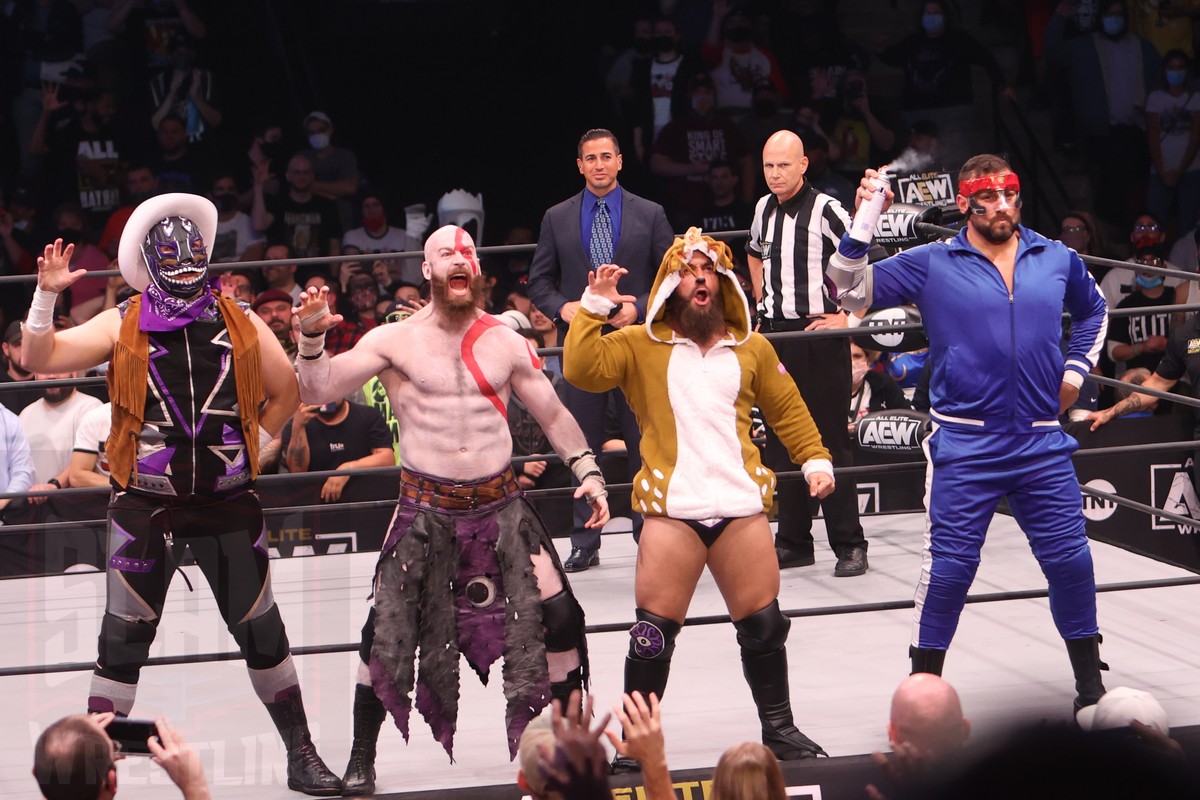 Both teams come to the ring dressed for Halloween. Silver is my favorite of the Dark Order, as he lives up to his word by dressing as Bambi. Not to be outdone, the Elite hit the ring as the Ghostbusters, complete with a theme song that plays off the classic movie theme. Who you gonna call? The Elite, apparently. Both teams are wrestling in costume as well, so this is just fantastic. Cabana cosplaying as Brandon Cutler, complete with cold spray, is also amazing. This match is a great example of how AEW does well mixing comedy and action in a single match or segment. Eventually, the Elite turn their attention to the person in the horse costume, assuming it’s Hangman Page. Alas, they discover only after a BTE Trigger that it’s Cutler with his mouth taped up so he couldn’t call out. Then who’s in the Stay Puft Marshmallow Man costume in the Elite’s corner? Oh my, that’s Page! His surprise appearance helps the Dark Order steal a victory, and Omega can only yell in frustration as Page and Dark Order stand united.

“A good night for the good guys,” says Jim Ross as the show fades out, and sometimes you need endings like that.  Stay Puft, ya’ll, and see you in seven!

It’s easy to forget, since we fans take it so seriously sometimes, that pro wrestling is supposed to be fun. This was only an average episode of Dynamite overall, but that main event was pure fun, but still wrapped in one of AEW’s best running storylines at the same time. That’s no easy feat, but a great example of what Dynamite is capable of in its best moments.