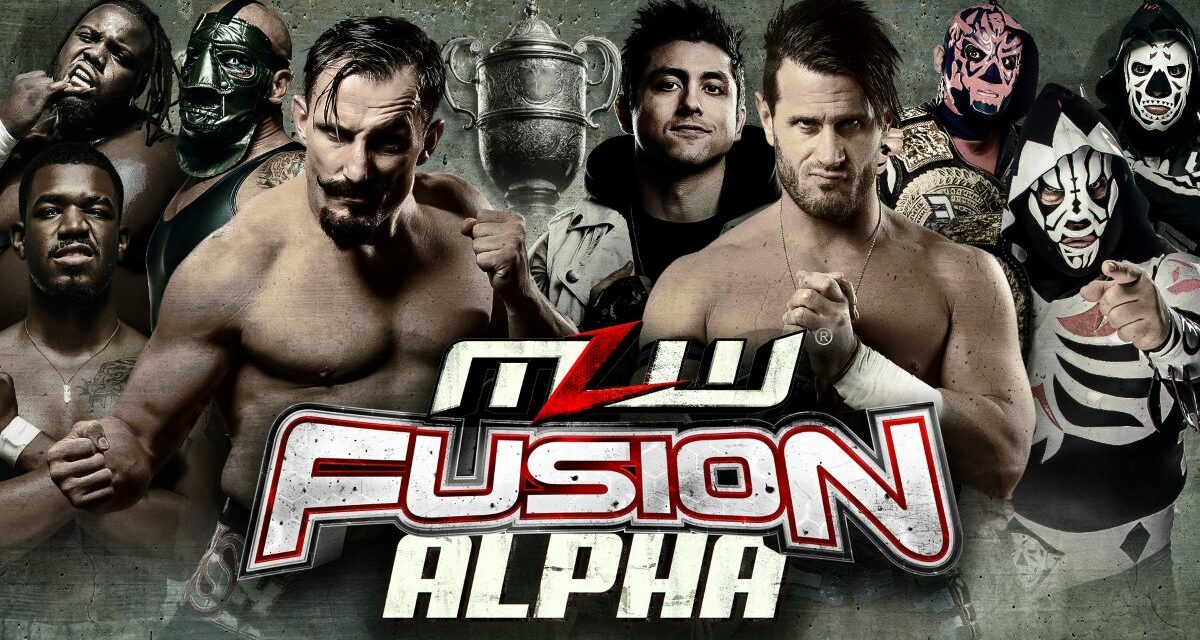 The Opera Cup tournament has delivered some great matches over the last few years, and tonight is no different as Bobby Fish, Lee Moriarty, TJP, and Alex Shelley are all great grapplers vying for a spot.  Who will make the cut, tonight in the ECW Arena in Philadelphia, PA?

We’ll find out tonight as the show goes to a cold open with El Jefe, Cesar Duran, caressing the now vacant MLW Openweight championship belt. He breaks the fourth wall, and says  the belt will have a new home on Thanksgiving for the next Fusion ALPHA.

King Muertes comes in looking natty in a suit and mask combo (the only way to dress, in my humble opinion), and wants what he came for. Duran gives him a box, and warns Muertes that there will be a sacrifice.  Muertes grabs the box, and it opens to a glowing light a la “Pulp Fiction.”

(Bonus points for whoever gets the reference.  No spoilers, please.)

We head to the arena where Rich Bocchini and Joe Dobrowski have the call, and it’s time for the First Match of the night for…

As he stepped between the ropes, the fans chant “Undisputed” at Fish, and you all know who’s got the attention of the crowd.  Fish has control early in match, and able to fight off challenge of Taiga Style.  Match goes back and forth, and then heads to the outside of the ring.  Fish is on the floor, and Moriarty attempts to punt but the ref halts him.  Fish takes advantage and grabs Moriarty’s legs, making him crash on the ring apron. It looks bad as Fish is ready to go to…

(Author’s Drunken Protest:  OK, MLW.  You forced me to do this.  *Ahem*  This match will be brought to you by an Easy Tiger cocktail, now with Taiga Style!)

We come back and Fish is still putting the hurt on Moriarty, with a slingshot senton.  Fish backs him to the ropes, and Moriarty gets a desperation enzugiri rocks Fish.  Now Moriarty finds his second wind, and delivers kicks in the corner, and sends Fish to the floor and then nails a sick knee shot.

Moriarty covers for a two count.  But Fish isn’t done, and gets Taiga Style with a dragon screw leg whip, followed by a sliding clothesline, but Moriarty answers back with a short lariat for another two count.  Fish cinches in a sleeper hold, but Moriarty fights out and goes up top to stomp his fingers that are hanging on the ropes, but an exploder suplex by Fish to the ropes stops his momentum, and both men are laid out.

The ref starts a ten count to the combatants, but Fish rises with kicks and a high angle back suplex for a two count.  Fish starts getting cocky, but Moriarty tries pinning combos.  It’s not enough as Fish gets a heel hook to Moriarty dead center of the ring, and he has no choice but to tap out.

Your Winner, and Advancing in The Opera Cup:  Bobby Fish

Bobby Fish will face Davey Richards in the semifinals of the Opera Cup, and that scratches all sorts of itches for me.

We get a replay of Richard Holliday losing his IWA Caribbean championship belt to Muertes last week, and this sets the stage for War Chamber coming up on November 6th.

Now if some of you are going that it sounds similar to NXT’s War Games, you are correct. Let that be a lesson on the importance of copyrighting names as soon as you get them.

Emilio Sparks with “The Judge”, EJ Nduka, and he’s happy to help Hammerstone fight Contra Unit, and maybe he’ll grant him a title match down the line.  Not a bad way to get into the heavyweight picture.

We go backstage with Calvin Tankman, who’s getting ready for his match with Gino Medina.  Tankman says he doesn’t need help from anyone, not even King Mo and Alex Kane.

Well, faster than you can say “America’s Top Team”, both men come from behind, and drop Tankman to the floor.  A random stage hand yells for help, as he hold a towel to Tankman’s face, which is turning bloody.  So, yeah…don’t expect that match with Medina tonight.

We get Halloween tips from Los Parks, and their doing it for the kids, they don’t care for gringos wearing stupid old Konnan masks.

Cesar Duran is in the back, and Mads Krügger comes up. He promised that he will destroy Hammerstone, and Duran is down for that. Duran says it’s time for him to return to his roots. That can’t be good for the next opponent.

Emilio Sparks caught up with Willow Nightingale at a Fan convention and cut in line (the Nerve!) to ask her regarding Holidead’s attack.

Willow is upset, and no, those sunglasses aren’t for fashion; Holidead scratched her cornea. At that moment, Duran calls her cell, and Willow says that he granted a match for Holidead next week.  She’s at peace with that, so Sparks…buh-bye, and don’t cut in line.  It’s rude.

As Holidead leads Dax to the ring, I am seriously getting “Pulp Fiction” vibes tonight, as she essentially brings out The Gimp.  During the intro, we learn that Tankman was rushed to the hospital, so that can put his Opera Cup hopes in jeopardy.

So why am I spending the time talking about this, and not the match?

Sing it with me, kids:  I do not recap squash matches.  But enjoy this Sheet Pan Roasted Chicken with Summer Squash recipe.  It’ll last longer than the match, as Krügger puts Dax away with a full nelson front facebuster.

Krügger gets the mic while Holidead stomps the good Dr. stupid, and it’s all “Hail Contra!” this, and “Hail Contra” that, and the music hits…it’s fan favorite Budd Heavy with a steel chair equalizer.  He rushes at Krügger, but a big boot and another full nelson facebuster ends that rally.

Well, thanks for playing, Heavy “B.”

Alicia Atout is with Your Boy Hammer, and he’s excited to be called the MLW Heavyweight champion.  How’s his team shaping up for War Chamber?  Well, Hammer calls out Holliday, and he ridiculously taped up like Negative Man from “Doom Patrol”. Atout asks him a question, and he mumbles.  Atout doesn’t understand so he mumbles again, and that prompts a slap by The Interview Queen.  Even Your Boy Hammer agrees he went too far.  It’s live TV, dude!

Speaking of big returns somebody wanted, nZo is coming to MLW, according to TMZ. Bada-boom, does MLW need the realest guy in the room (how you doin’)?

It’s time for the Main Event, which is also for the…

The MLW Opera Cup Opening Round:  TJP vs. Alex Shelley

The fans are on their feet, with dueling chants of “Mo-tor City/TJP.”  This match is a pick ‘em, as both men start with some chain wrestling, and Shelley manages to get the upper hand, and he struts a la Ric Flair.  TJP glares and they go back to some fundamentals.  Shelley has TJP in the abdominal stretch, but TJP reverses and gets Shelley down to the mat in a hammerlock, but Shelley gets up and gets TJP off with a flying mare.  TJP Is sent in the corner, and Shelley attempts an exploder suplex, but gets an elbow for his troubles, and TJP adds insult to injury by scraping his boot laces in Shelley’s eyes.  Shelley sends TJP to the ropes, but he stops on the middle ropes.

Shelley goes after TJP, but he goes through the ropes, and TJP nails a pescado on the floor that he follows with…

(Author’s Drunken Protest #2:  This match is brought to you by the Black Mamba cocktail, in honor of TJP)

TJP is in the driver’s seat, wearing down the Motor City Machine Gun.  Shelley attempts some offense, but TJP manages a spinning toe takedown to a leg scissors hold.  Shelley powers through, but TJP sends him back down with the same move.  Shelley escapes, and then sends TJP to the ropes, but he slips through.  When Shelley gives chase, TJP maneuvers to a sharpshooter and then to a Muta Lock, but Shelley breaks out of the submission. TJP goes back with a hammerlock and wrenches back on Shelley’s knee.

With Shelley hobbled up, TJP goes with big offensive moves, but Shelley counters with a flatliner to the middle turnbuckle, and follows up with a running knee in the corner with a Tornado DDT.  Shelley capitalizes up top with a frog splash to pin for one, two…TJP kicks out.

A discus forearm smash by Shelley, and he hits ropes but dropkick to knee by TJP stops his offense in its tracks.  From there, we get “Yay/Boo” forearms from Shelley and TJP respectively, but a superkick by Shelley gives him the upper hand.  He goes for Sliced Bread #2, but TJP pushes him to the corner turn buckle to stun Shelley and drop him, and then TJP follows with a wicked facewash.  Shelley is prone on the mat, and TJP goes up top with the Black Mamba splash, but misses.  Shelley tries the Border City Stretch, but can’t lock it in, and TJP reverses and gets a STF, but Shelley counters it to a pinning combination for a two count.  Shelley now cinches the Border City Stretch, but TJP reverses to his own pinning combo, as he grabs the ropes for leverage, but the ref doesn’t see as he is in position to see the pin to Shelley and counts one, two, and three.

.@MegaTJP with the assist of the rope gets the win and advances on to the next round of the #OperaCup🏆#MLWFusion
▶️ https://t.co/8CNf64sjWQ pic.twitter.com/ZPzQjO8DPy

Your Winner, and Advancing in the Opera Cup:  TJP

TJP will face Calvin Tankman in the next few weeks, assuming he recovers from his injuries, as the show fades to black.

When the First Match, and the Main event click, like we got with Moriarty/Fish and TJP/Shelley, the show is perfect, and that is undisputed.

The ads in the middle of the matches and the Mads Krügger (oh, let’s be charitable and call it a) match is not quite the filler I wanted, but then again, I’ve been spoiled with the Middleweight/Featherweight matches.

There’s a lot more excitement coming your way, as MLW gears for War Chamber, so see you in seven!