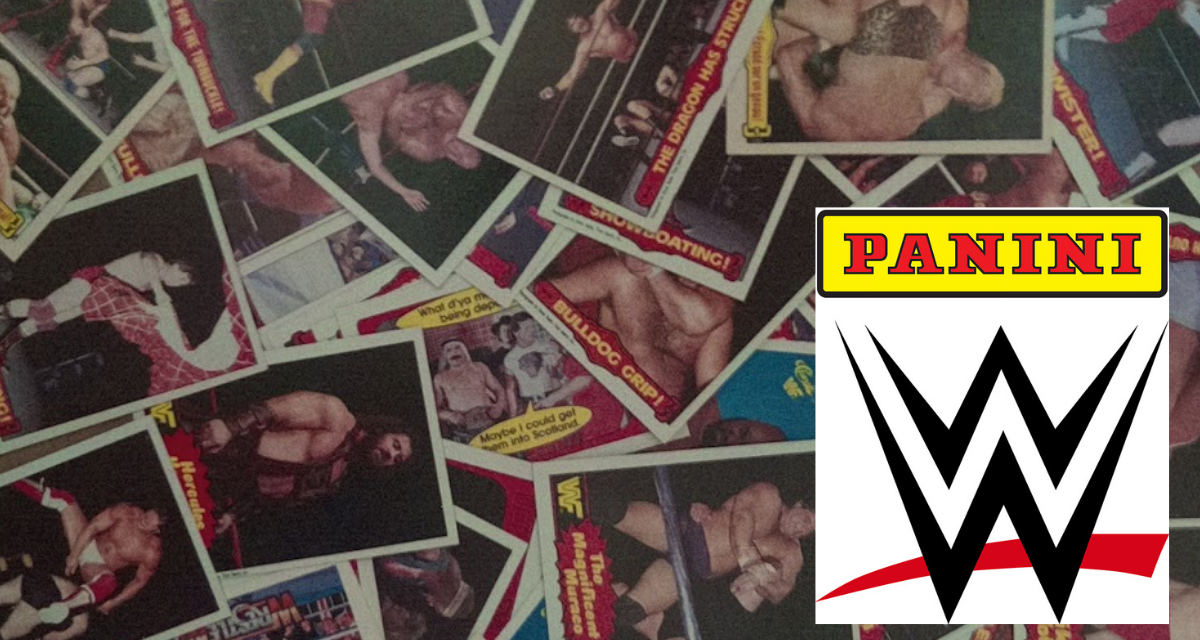 The wrestling collectibles world was shook up on Tuesday, as WWE announced that it had signed a multi-year agreement with The Panini Group to make and distribute its trading cards and stickers.

For years, WWE had been working with Topps; the first set of WWF cards with Topps/O-Pee-Chee came out in 1985. Releases in 2021 included WWE Chrome, WWE Fully Loaded, WWE Women’s Division and Topps WWE NXT. In August, Topps was rocked as well by the loss of the Major League Baseball contract — after 70 years. In that case, MLB signed with Fanatics.

“Topps recently lost, after 70 years, their Major League Baseball license. According to financial documents, baseball cards accounted for over 50% of the company’s total revenue,” said Chris Harris of stalegum.com. “WWE wasn’t as big of a revenue generator, but losing another licensee isn’t a sign of confidence in the long-term viability of Topps.”

According to the press release, the new deal kicks in with the first quarter of 2022 — it will be called 2022 WWE Prizm and be out in time for WrestleMania — and “will include multiple trading card products during the first year.”

Cards will be created by the company’s US subsidiary, Panini America; The Panini Group is based in Italy, and has been around since 1961, publishing books, comics, magazines, stickers, trading cards and other items. Panini has previously done WWE cards, but exclusive to locations, like the 2016 WWE Panini Crystal cards in Spain; Panini also did a 1998 WCW/NWO photo card set.

SlamWrestling.net’s collectibles expert, Rasslin Merch Machine, noted that “Panini are famous for being at the forefront of the licensed collectible stickers and albums that were especially popular in the 1980s. Stickers have long been more popular in much of Europe than cards. It will be interesting to see what the Italian company does with the license.”

“Panini is based in Italy, and is perhaps best known for their soccer stickers,” added Harris. “They have tremendous distribution in the European and Latin American markets. Much better than Topps. For a company like WWE that has always had an eye on the European market, this had to play a role in choosing Panini.”

Panini has produced cards for UFC, NBA, NFL, FIFA, MLBPA, Disney, DreamWorks, Warner Bros., and has a slew of other licenses.

“We have always been intrigued by WWE as a license partner and their fans’ incredible passion,” said Panini America CEO Mark Warsop in the press release. “Our entire team is looking forward to adding WWE, a truly iconic license, to our roster of exclusive partners. We have big plans for our WWE portfolio and the new heights we can help WWE trading cards and stickers reach in the collectibles arena.”

WWE touted the international reach of Panini in the press release. “Panini has a 60-year history in sports and entertainment collectibles and is a leader in the trading card space throughout the U.S. as well as in Latin America, Europe and Asia,” said Scott Zanghellini, WWE Senior Vice President, Revenue Strategy & Development. “We believe that this partnership perfectly aligns our mutual interests in providing fans with exclusive collectibles and, ultimately, growing this category globally.”

Harris shared some thoughts on what was to come: “As for the cards themselves, I’m sure Donruss, Donruss Optic, and Prizm will replace the Topps, Topps Chrome, and Finest brands, as they are similar analogs. As far as “retro” themed products like Topps Heritage and Allen & Ginter’s, Panini really doesn’t have a similar brand for those. Panini (at least in basketball and football) has a reputation for flooding the market with brands. They made 46 football and 26 in basketball in 2020 alone! I don’t think WWE will be that extreme. They’ve made three UFC products since April, and will probably release at least one more early next year. I’d expect something similar for WWE.”