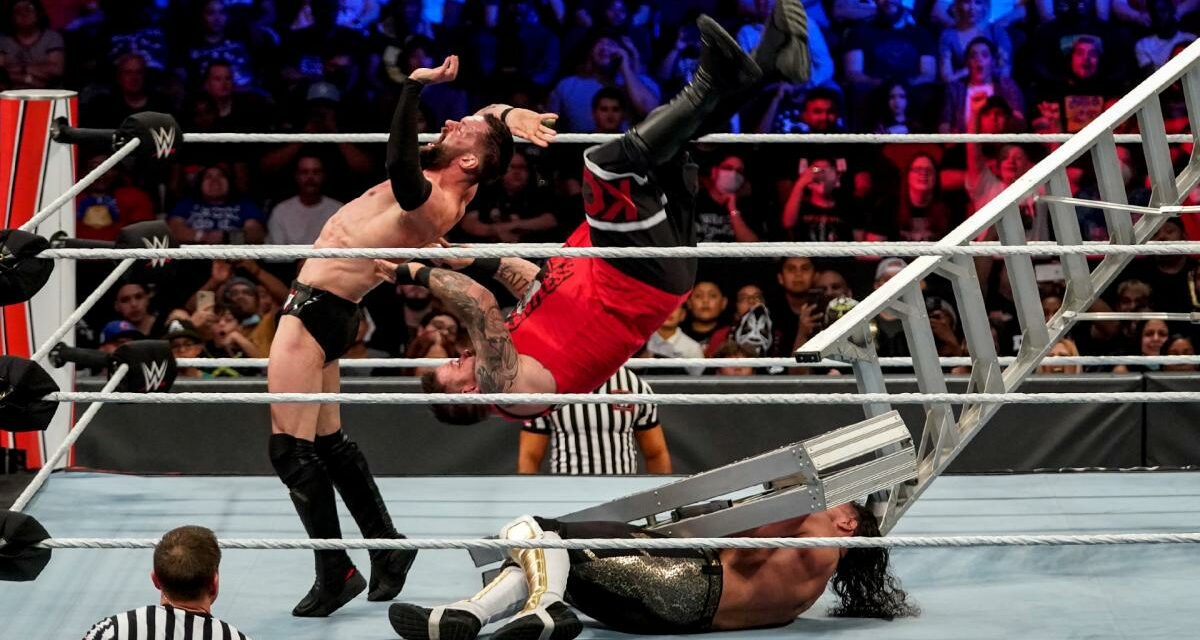 A PPV-caliber main event highlights the season premiere of Monday Night Raw. As opposed to Friday Night Smackdown’s curious timing of their own season premiere, Raw is at least smart enough to tie it in with the first night of their post-draft happenings. That means lots of new storylines to set in motion, and you might as well start at the top with finding a new challenger for the WWE Championship.

Big E Langston comes out to profess his love for Houston, Texas, and they respond with a chant supporting their Astros in the World Series. They clap. They stomp their feet. They bang garbage cans. No, wait…

It’s not long before a cavalcade of new Raw arrivals hit the ring, all vying for the chance to go after Langston. First, Seth Rollins, then Rey Mysterio, followed by Finn Balor, and finally Kevin Owens. All promote their championship pedigree, but it’s finally too much for Rollins who goes after Owens because he thinks the title shot should automatically be his. After a little scrapping, Sonya Deville solves the problem by creating a Fatal Four Way ladder match to name a number-one contender, and that’s for tonight.

Ford and Gable kick things off, with Gable soon locking up Ford’s arm while pressing his face into the mat, loudly proclaiming many moves “For the Academy!”. Dawkins tags in and they double-team both Dirty Dogs with ease, but turn to see Otis scowling at them, revisiting their past history from SmackDown.

Randy Orton and Riddle watch from the back as we return from commercial, seeing Ford leap up with a kick on Robert Roode as he struggles to make a tag. Instead, Ziggler tags in and tries a Famouser, though Ford counters by turning it into a sit-out powerbomb. Otis tags himself in off of Ziggler, but Ford slinks away from a corner-charge and brings in Dawkins to big cheers and a ring clear. Otis saves Gable from a rather innocent-looking spinning Dawkins attack, allowing the Academy to hit their clothesline/German suplex combo, but Ford breaks up the pin with a frog splash. 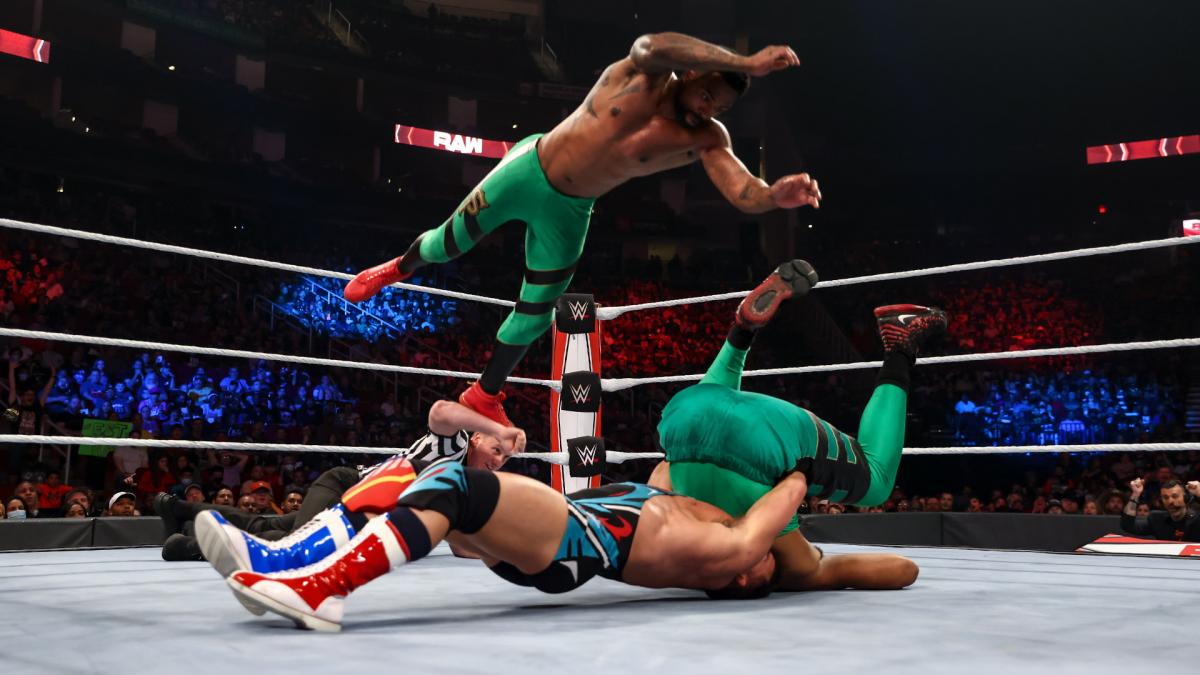 It’s the little things that please me, like how nicely Gable is keeping his own shoulders up. Photo: WWE

As Dawkins plants Roode for Ford to splash again, the crowd spots something happening and boos restlessly. Down the aisle strides Omos, laying waste to both profits, with his punch of Dawkins allowing Ziggler and Roode to Spinebuster/Zig-Zag their way to a title shot.

Winners via pinfall: The Dirty Dogs

Next up is a self-coronation as Queen Zelina takes her spot in the ring, looking less ridiculous than when forced to wrestle in a t-shirt, but unintentionally silly sitting in a huge chair that makes her look like a child. 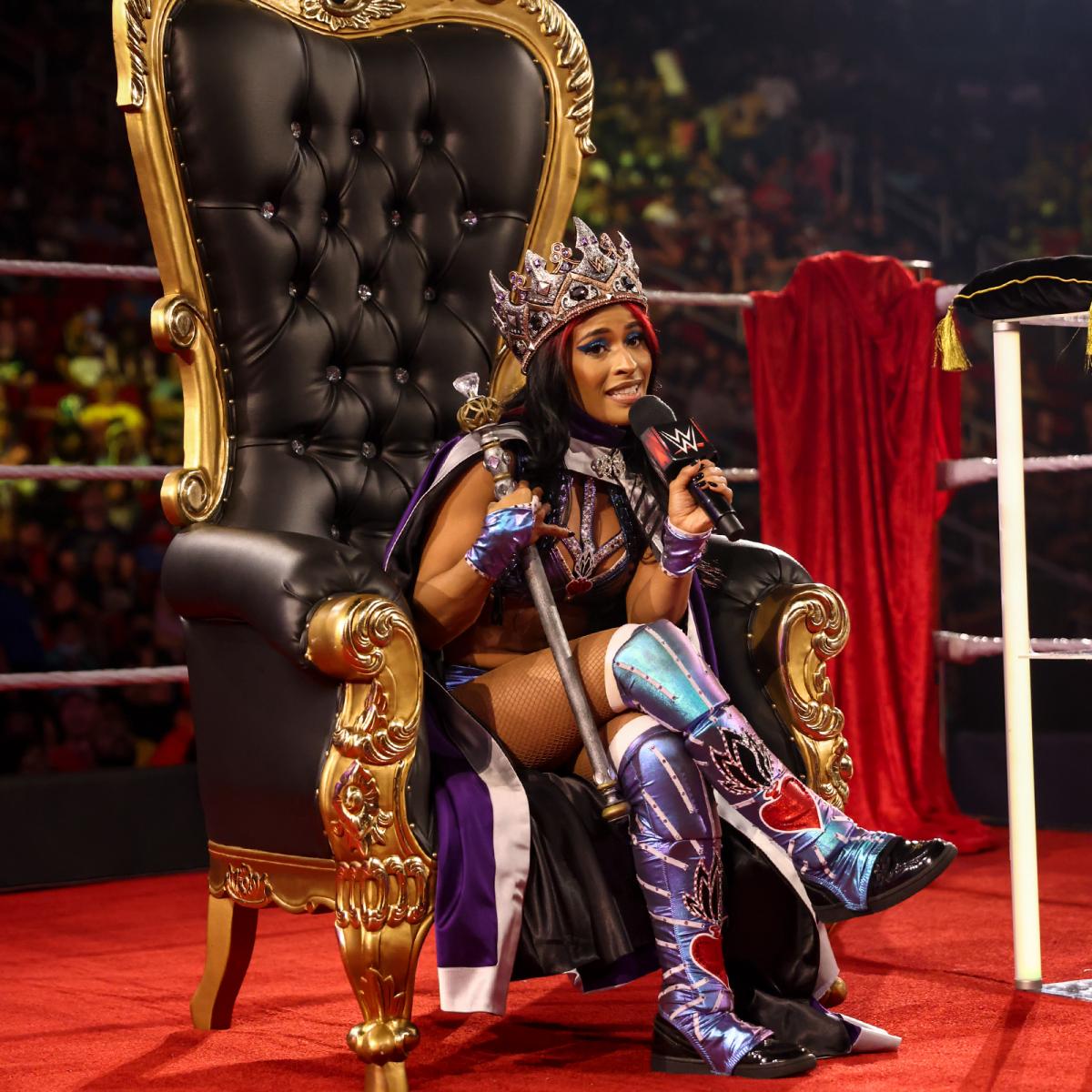 As she starts breaking out a perhaps Booker T-inspired British accent, a few women are watching in the back as she sings her own praises. Doudrop is among them, and she appears to have heard enough, heading to the ring to get their match underway.

Doudrop has no trouble in throwing the Queen around the ring, dropping a heavy elbow on Vega. The Queen launches off the second rope and brings Doudrop down with a Codebreaker, but it only gets her a two-count. Going to Plan B, Vega removes a corner turnbuckle, and while the ref goes about replacing it, she decks Doudrop with her sceptre for the underhanded win.

Becky Lynch is given a few minutes to re-introduce herself to the Monday Night Raw audience. She reminds them that she never lost the Raw Women’s Championship in the first place, and begins listing off the women on Raw that she plans on beating.

Right now, though, Bianca Belair dances out to proclaim her unfinished business with Lynch. The crowd on Raw seems as unsure about who to support in the rivalry as the SmackDown fans — is Belair the face in this feud? Is Lynch? Both of them seem stuck right in the middle, and it’s too bad that they didn’t both get a fresh start away from each other on Monday night.

Belair ends up attacking Lynch, sending her to the floor following a spinebuster and then throwing her over the announcer’s table. They fight their way back into the ring, even bringing a kendo stick into the mix, before Lynch retreats up the ramp and spitefully gives Belair a title match … sometime.

Backstage, Owens and Balor catch up, and both agree that they won’t hold back on each other during the ladder match.

Priest tosses T-Bar with a Falcon Arrow, and after the challenger rolls out of the ring and throws a chair at the trailing Priest, leading to a disqualification, Damian loses his cool and attacks T-Bar all around the ringside. 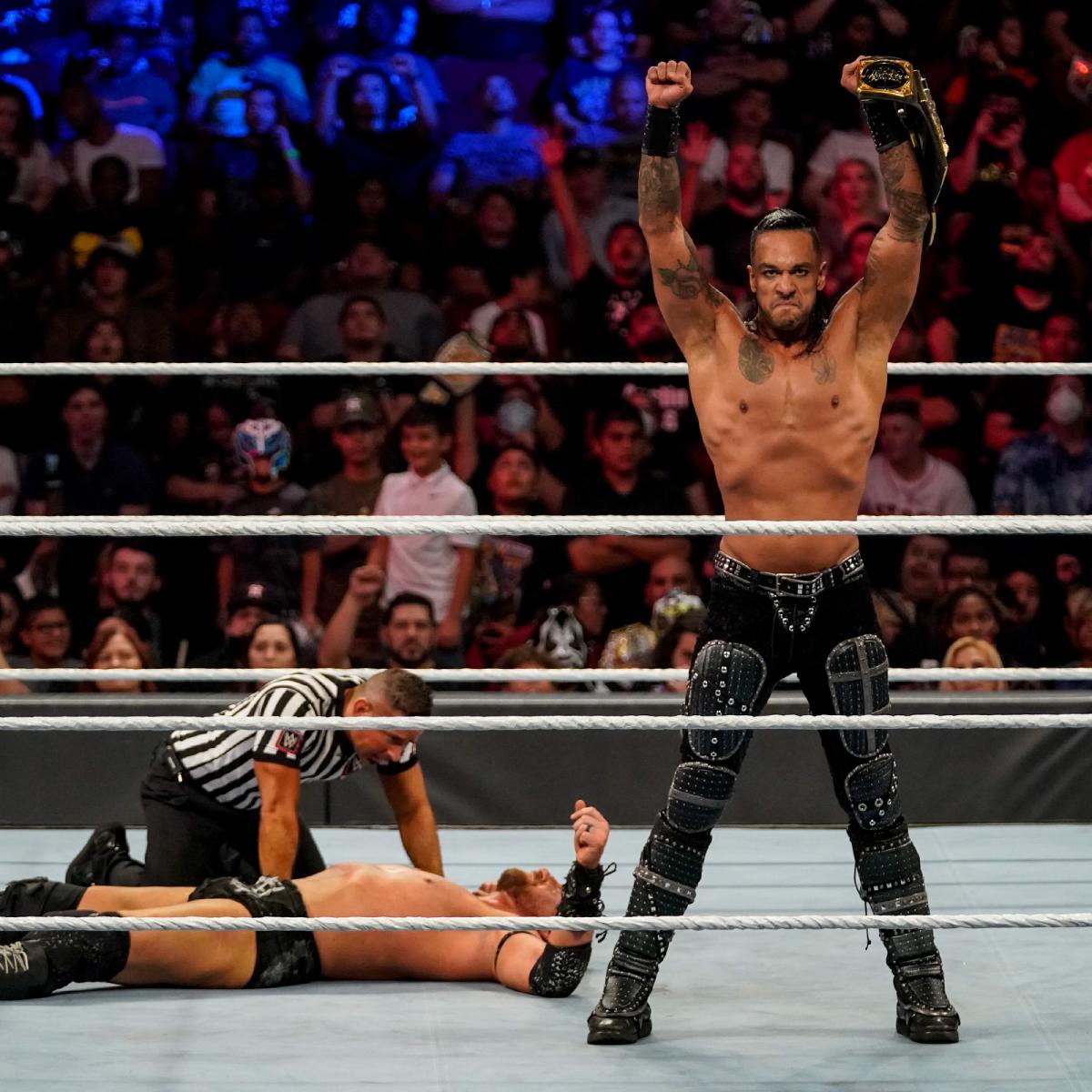 Carmella starts off with a stiff right hand and a solid elbow to Morgan in the corner. Liv keeps chasing Carmella around until she finally tracks her down to the announcer’s table where she’s asking Corey Graves to tell everyone how beautiful she is before Morgan slams her face onto the table. Morgan says something seemingly sarcastic to Graves about his engagement to Carmella, but I can’t quite make it out. Back in the ring, Carmella uses her Mella Buster for the victory.

Cedric tries to punch, kick, and move, but Lee tosses him around at will, clubs him across the head, and runs him over off the ropes. A Big Bang Catastrophe finishes things up. “Bearcat” Lee looks much less happy than Keith Lee.

Theory goes for easy heel mode after an early dropkick on Dominik, emulating Eddie Guerrero’s swagger. Theory spends a lot of time playing to the crowd, and Dominik sneaks back into the match with a bulldog off the second rope. An ugly looking Unproven Cutter closes out the match.

A slow start to the match pits Ziggler against Riddle first, before each give way to their partner. The crowd is pumped for the tag champs as they double-team Roode before he plants Riddle on the apron going into break. We’re back from commercial in time to see Orton get the hot tag and bring out some of his greatest hits against Roode. A distraction by Ziggler allows Roode to throw Orton over the barricade and all of a sudden, it’s the Viper who needs to tag out.

Both teams do tag, and Riddle recovers well from a missed Pele kick (even better: Ziggler not pretending to have been kicked).  He drops sentons on both Dogs but Roode breaks up a pin on Ziggler — only to be rewarded with an RKO. Riddle rolls up Ziggler for the win.

Everyone picks on Rollins at first, but Balor is in no mood to wait around and looks to bring in a ladder early. Owens is the first to lay everyone out with it, though, including planting Balor across the steel with a powerbomb. Owens goes for broke with an attempted somersault senton onto Rollins who is laid out on the ladder, but all Owens hits is metal as Rollins rolls away.

Coming back from break, it’s Rollins running the ladder into all, yelling “I shouldn’t even be in this match”. I get what he means, but it didn’t come out like he meant. Balor is the first to climb up and get a hand on the contract, but Owens brings him (and Mysterio) down by pushing over the ladder. He soon introduces a table to the environment, setting it up on the outside floor (saving it for later, surely).

In the ring, Rey reverses a pop-up powerbomb into a 619 set-up, but Rollins grabs Mysterio’s feet to bring that attempt to a halt. Instead, Mysterio does a 619 to Owens on the outside who was holding a ladder. As Owens falls flat after Mysterio rides the ladder right on top of him, Balor dives over the ropes to knock down both Rollins and Mysterio.

Balor suspends a ladder between the apron and announcer’s table, but around the corner Owens is powerbombing Rey through the previously set up table. Owens gets in the ring but Rollins backdrops him over the ropes onto the ladder that Balor had put in place. He then gets rid of Balor with a stomp before climbing the ladder to gain the win. 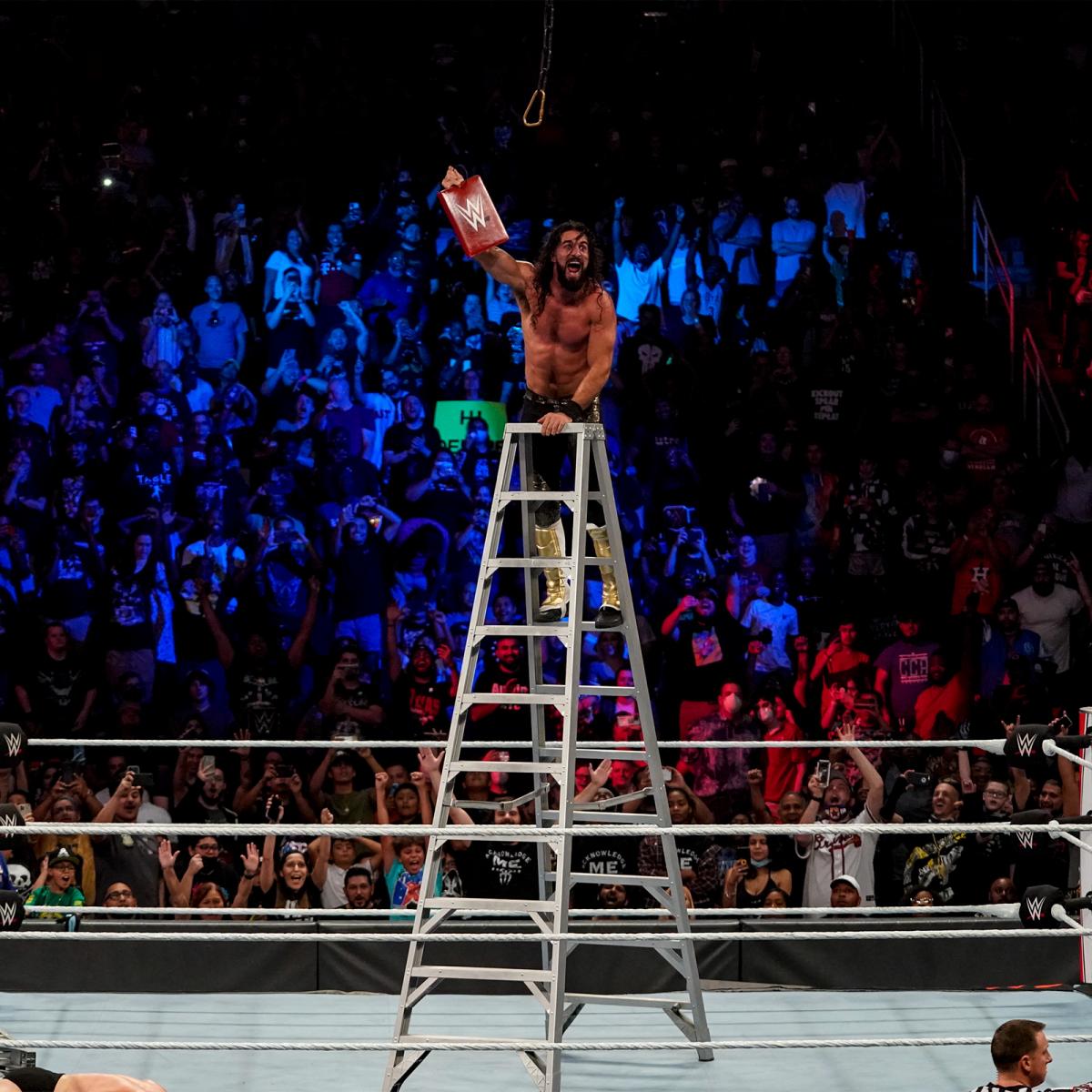 Winner via successful unhooking and #1 Contender for the WWE Championship: Seth Rollins

Rollins, who is ecstatic about claiming what he figured was his right anyway, stares down a stoic Big E Langston to finish the show.

It’s not often that I say this, but Raw didn’t feel bloated this week. A really good main event and a bunch of new faces to provide intrigue helped, so we’ll see if it can keep the momentum going next week.