Sam Adonis is the most hated man in wrestling, and so can you! 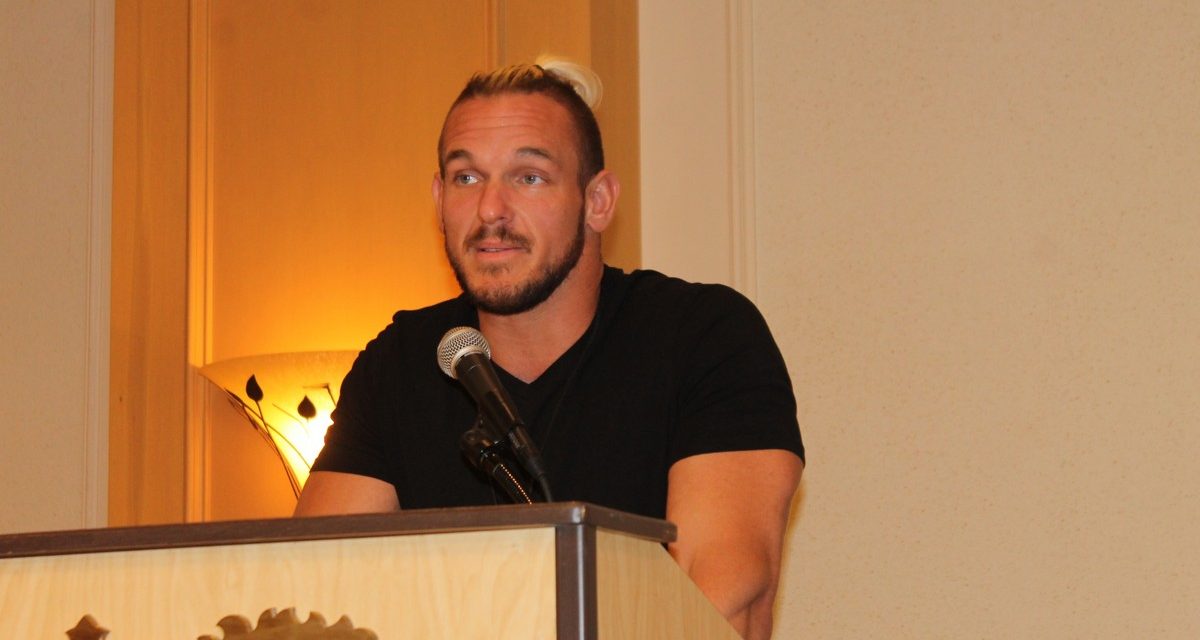 It’s hard to be liked, but just as hard to be hated by many. Sam Adonis makes it easy, and he has a lot of fun doing so.

Having mostly wrestled in Mexico, where Adonis has made his name, he is now starting to attract the attention of promotions in the United States, like the National Wrestling Alliance (NWA) and IMPACT! Wrestling.

But that was not always the case for the 6-foot-3, 251-pound Samuel Polinsky, as he talked about his journey to become “El Rudo de Las Chicas.” Born in Pittsburgh, where his father was a local wrestling promoter, it was natural for he and his brother, Matt, to become enthralled with the sport.

“I got signed to WWE when I was 21 years-old,” Adonis recalled to SlamWrestling.net, “and basically I just had, you know, a very average or mediocre run in developmental. Nothing was clicking. Nothing was working. So William Regal [NXT Head of Talent relations] shipped me out, and sent me off to the United Kingdom, where I really learned my style.”

From there, he worked on his style and his character until he became a better-rounded performer.

When he got invited to Consejo Mundial de Lucha Libre (CMLL) in Mexico, that was the moment things started to change. He was already a brash American in the company, but it was when he decided to take it to the next level that things really clicked.

“We had a pay-per-view come up where I was a representative of the United States,” recalled Adonis. “So I get airbrushed tights, like Rick Rude does, and I was thinking, ‘What can I do that’s very American that’ll piss people off?’”

That was when Adonis chose Donald Trump. “I literally didn’t put any thought to it,” Adonis admitted. “It was just no big deal and just kind of almost cheap heat, if you will, because I knew it was so easy. But you know, it’s stuck hard and everybody was just going nuts.” 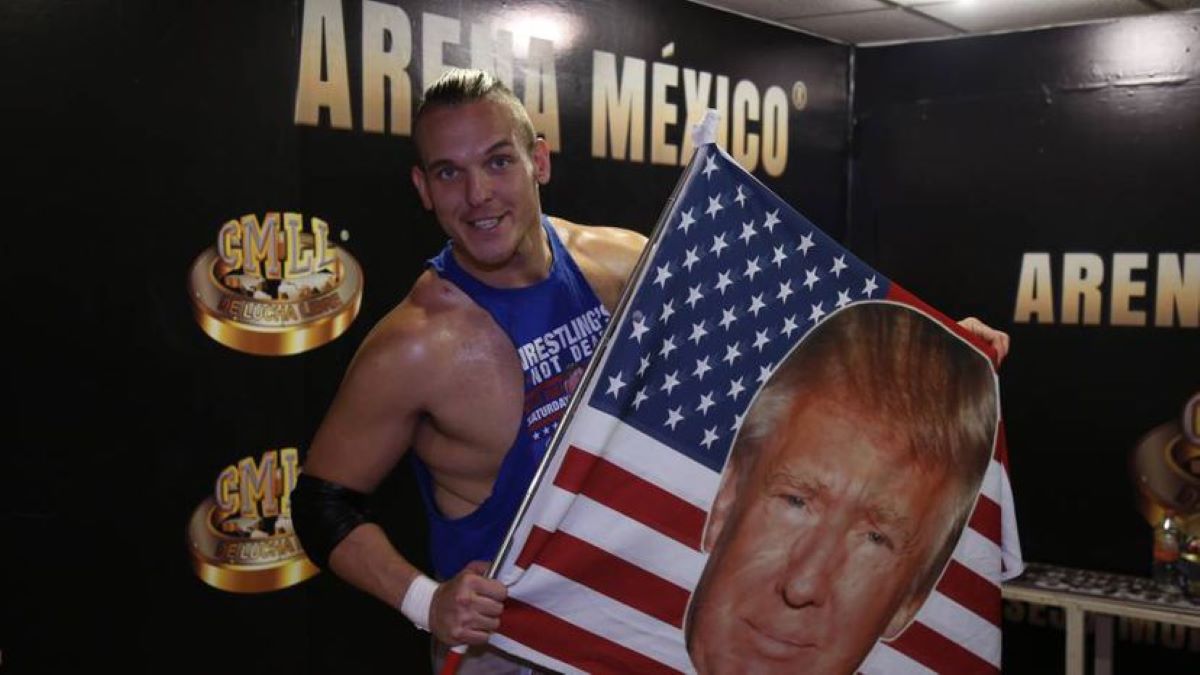 Adonis kept on riling up the fans in Mexico to near-riot levels with his antics, which included coming to the ring an American flag with Trump’s visage at Arena Mexico. “I was literally the top heel in the company, which was great,” recalled Adonis. “We did over 10,000 people with Negro Casas and Blue Panther. So it was nice to finally have my piece of the pie. At that point in time, I felt like I had made it because it was the top high-profile spot.”

At that point, if you followed any news outlets during 2016-17, you would have seen Adonis was starting to garner a lot of attention outside of Mexico.

“I was probably the most heavily publicized professional wrestler on the planet, including WWE wrestlers,” said Adonis. “I mean, the entire year, I was everywhere: GQ Magazine, Vice, NBC, CNN, Reuters, Bloomberg, everywhere you can think of they came to Mexico to film and interview me.”

How well did this go over with your average NPR listener? “A lot of them, they were using it is clickbait,” Adonis said. “They wanted to say, ‘Look at this idiot in Mexico that’s using American politics to get himself killed.’ Where really, when they came to Mexico, [I] was able to explain to them the beauty and the art of faces and heels. I explained to them, ‘Hey, this is my job. I piss people off, so I can get my butt kicked and send them home happy.’”

Adonis used that spotlight to his advantage to explain to the uninitiated on the sport of professional wrestling. “There has to be an antagonist in every great struggle, and that’s my role. I really enjoyed it, and I explained that to them and, a lot of people left and made these publications, and basically viewed wrestling [in a] totally new light.”

As for Adonis’ political affiliations? “Well, I honestly… I feel like you have to be unbiased in our profession because it’s such a cultural melting pot. The beauty of wrestling is its diversity and people from all walks of life do it, and it’s appreciated in every culture,” he said diplomatically.

The same is true of Adonis outside the ring. “I come from a very real liberal family and nobody cares,” he said. “My front door’s open to anyone. We were always in the house where, if someone had nowhere to go, you come to the Polinsky’s house, and that’s just how we were raised. So I never thought for a second that it would be as sensitive as it became.” (That brother Matt, who was also into wrestling? That is WWE’s Corey Graves.)

Lately, even though Adonis has been working in Mexico’s AAA promotion, he has come up to the United States to wrestle, and in addition to working in independent shows, he has also found exposure in the NWA on its NWA Powerrr shows. 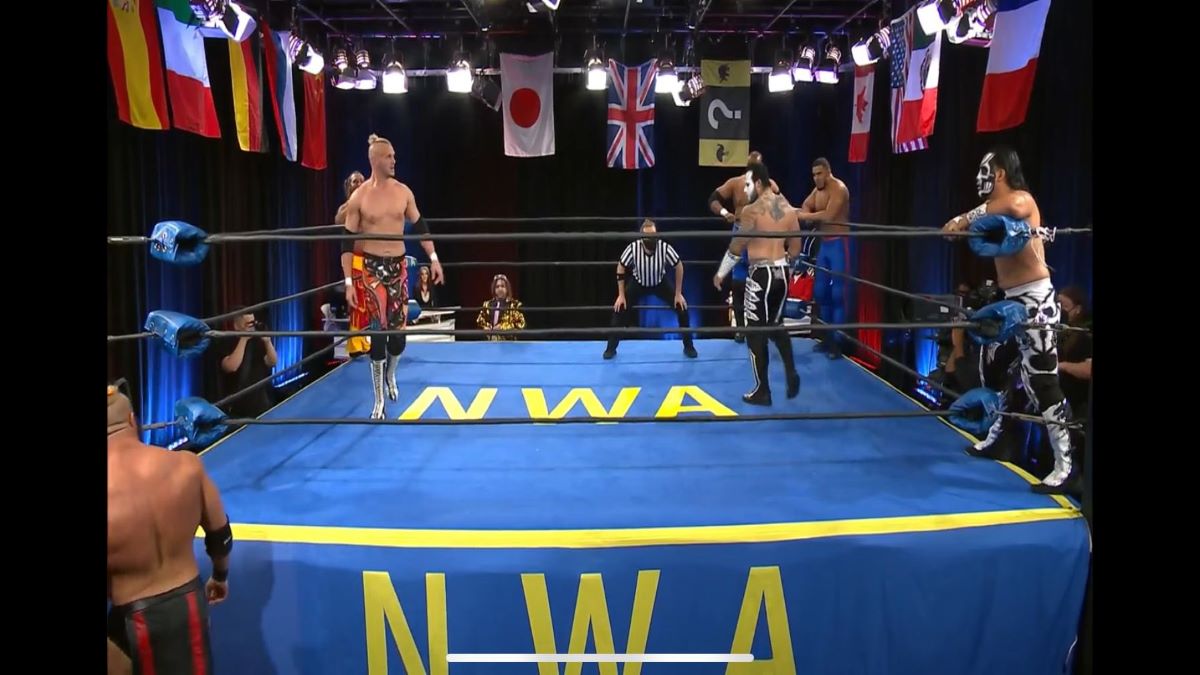 “I’ve been good friends with Nick Aldis and Thom Latimer for years,” said Adonis. “A lot of those guys are my friends, and I don’t know if someone reached out to me, or if I was told to reach out to someone, but I know it happened quite quickly.”

He was introduced on those shows with the name “El Rudo.”

“They [NWA] were just trying to create separation between me and [Chris] Adonis [the former Chris Masters]. It just had to be something different, and I always run with the moniker, ‘El Rudo de Las Chicas,’ which means ‘The ladies bad guy.’”

The name doesn’t affect him as much as you would think. “It’s almost not even a new name,” Adonis explained. “It’s my name. It just happens [to] be part of the name.”

That name had even carried him to September’s Cauliflower Alley Club reunion at the Gold Coast Hotel & Casino in Las Vegas, where he presented the Lucha Libre Award to inductee Rey Mysterio, and gave a seminar about being “The Most Hated Man in Mexico.” 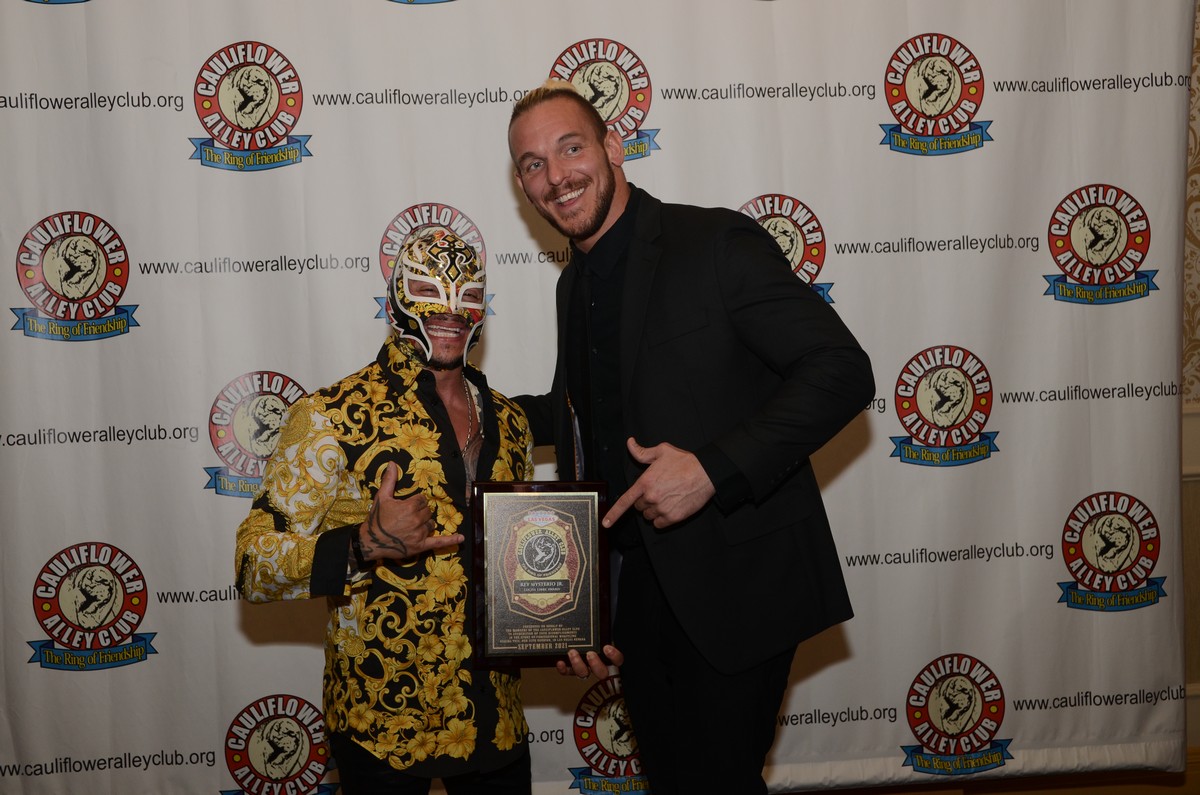 Adonis used that pulpit to educate those wanting to make it to the top of the wrestling business.

He also spoke on the idea on the adage of “paying your dues,” which, in Adonis’ mind, has a different connotation. “I think paying dues has nothing to do with putting out flyers, good posters.  ‘Paying dues’ is working 10-hour days to make that paycheck to make sure that you can take that day off, and keep going.”

Adonis then relayed a story of his life during COVID, when travel was shut down. “I was able to get flown all over the world and work for people as a pro wrestler,” he said. “When the pandemic hit, I was just up a creek without a paddle. Nothing I can do. Well, Amazon’s always hiring.” That is what Adonis did for part of the lockdown. 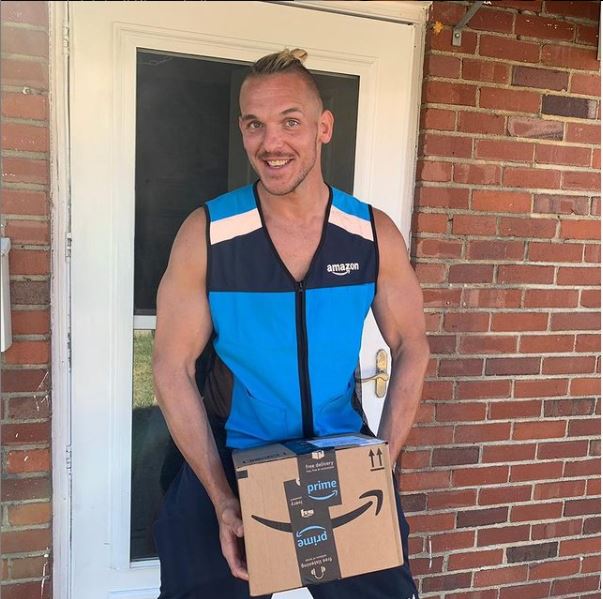 The best part of Adonis’ well-attended seminar was how his work is an illustration that you can make a name for yourself without a huge contract. “I turned down a lot of really big opportunities, because they didn’t work for me,” has said. “People are in such a hurry for the instant gratification of, ‘Now I signed with this company. Now I signed with that company,’ and I’m living proof that you can make a living for yourself in wrestling, without signing a contract. You can do what you do and make it work for you, and enjoy it. Whether it’s Mexico, Japan, at the end of the day, if any of you are familiar with me and inspired by me, all I would say is just pay attention to wrestling. Everything is applicable.”

Adonis then offered this advice to the crowd: “Being the hottest heel in Mexico didn’t come from race baiting. It didn’t come from just being overall mean, or doing anything different than anyone else. It was the opportunity, and the combination of everything around it, and my knowledge of the wrestling business presenting me with opportunities presented with a good idea.”

So hate Sam Adonis for what he does in the ring, not for the outside the norm choices he made to make it in this business.

TOP PHOTO: Sam Adonis speaks during his seminar at the Cauliflower Alley Club in September 2021. Photo by Brad McFarlin