ROH TV report (10/25): The Foundation and Vlnce Unlted lock up 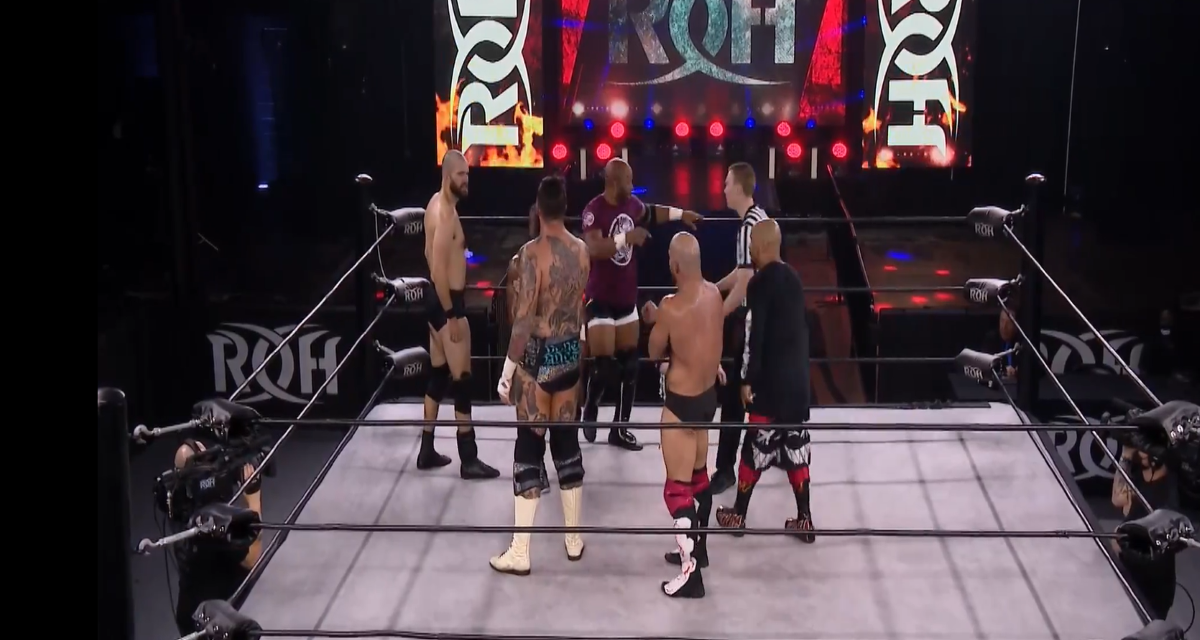 Greetings and salutations everyone and welcome to my weekly ROH TV report. We are a week closer to Final Battle and only so many TV shows before the PPV. My hope is that this week we get more build up. Without further ado let’s get to it.

We cut to the news center and Quinn McKay welcomes us to the show and runs down the card. Our commentators for the show are Ian Riccaboni and Caprice Coleman.

Tony Deppen is out first. In the usual pre match promo he said he would accomplish more through violence. Rhett Titus was out next and in his promo he said that he sees a lot of similarities between he and Deppen. He said that play time is over and he is gong to make Deppen go to work.

Tune in for FREE here: https://t.co/i2jLIRJRhr

The code of honor was eventually adhered to after Deppen was initially reluctant. Deppen and Titus have a back and forth to start the match but Titus eventually won a test of strength. There was more backa nd forth holds from both men. After a series of two counts, both men were up and Deppen takes Titus down and went for a leg submission. Titus grabbed the ropes as we went to break.

Back from the break both men had a very technical match that saw half nelsons, submissions, ground work, hip tosses and much more from the two competitors. Titus snap mared Deppen into the corner and missed a running charge. Titus once again ran to Deppen but got hit with a knee to the stomach. Deppen went for a sleeper but Titus was able to counter and reverse it into an armbar. Titus got out but Deppen grabbed his arm and actually bit him. At this point Homicide came out to the ring and jumps on the apron to argue wot the referee, Todd Sinclair. Deppen kicked Titus on the spine. Deppen went for a big splash but Titus hit him with the double knees to the gut as we went to commercial.

Back from the break, Titus hit a shoulder tackle on Deppen. Titus then hit a back suplex for a two count. Homicide once again got involved as he grabbed a chair as he stood on the apron. Deppen hits a double stomp off the top rope for a very close two count which caused Homicide to argue with the ref saying that it should be a three. After more close falls from both men, Homicide starts throwing chairs into the ring. Titus threw a chair out of the ring at Homicide. The referee argued with Homicide as Deppen hit Titus with a chair on the gut. Deppen hits a running kick, went for the pin and got the win.

After the match, Deppen and Homicide celebrate in the ring.

Brian Zane is wanting to speak with Rhett Titus after The Foundation didn’t help him. Titus is also furious that no one helped him. Zane interviews Tony Deppen and asked him about Homicide. Deppen said that he and Vlnce Unltd is cut from the same cloth and that ROH has too many rules. He ends the interview by saying violence will always prevail.

The matches announced are:

Brody King and Chris Dickinson were out first as Homicide accompanied them to the ring. In their promo, King said that the Foundations brand of wrestling is extinct. Dickinson asked if Lethal will get a time machine to fight Karl Gotch. Jonathan Gresham and Tracy Williams are out next accompanied to the ring by Jay Lethal. In their promo Williams said that this war has gone on too long. Gresham said that pure wrestling will prevail.

Are you team PURE or team VIOLENCE?? Let us know using #WatchROH

The code of honor was adhered to. The Foundation started the match right away and took it to Vlnce Unlted’s corner. The Foundation controlled the early part of this match as Williams splashed Dickinson in the corner and hit an underhook suplex off the top rope for a two count as we headed into commercial.

Back from the break Dickinson copped Williams as he tagged in King. Willaims was double teams as King applied a Boston Crab. Williams was able to make it to the corner for a rope break. after some more offense from Vlnce Unlted Williams blocked a piledriver attempt and hit Dickinson with chops and elbows. Dickinson was able to get that piledriver he was attempting earlier and applies an STF. Williams reverses it while Gresham and King fought on the outside of the ring. Dickinson rolled up Williams for a near count. Williams reapplies the STF but Dickinson is able to fight his way out of the move. This opened the door for Dickinson  to kick Gresham and gets a chokehold on as the referee stops the match.

After the match Gresham and Lethal check on Williams. Homicide mocked Williams. Lethal wants to fight Homicide as all hell broke loose. Senior Referee, Todd Sinclair had to come out to attempt to restore order as we head to break.

Back from the break and the match is on!

IT’S ON!!! No need for entrances @thelethaljay and Homicide are ready to brawl immediately! 🔥

Both men trade punches. Lethal got the upperhand with some chops to Homicide. After a missed Missile dropkick, Lethal took out a fork from Homicides knee pad and gave it to the referee. Homicide was able to get it back. Homicide went to stab Lethal but it was blocked. Lethal tried the same and it was also blocked by Homicide. Lethal with a rollup after Homicide went for the fork but it was only for a two count. Homicide with a vicious knee to Lethal’s back and he tries to go for the Cop Killer but Lethal fights out and hits a superkick. Deppen came out with a chair but Dutch from the Righteous makes a last minute save! This opened the match up as Lethal hit a Lethal Injection on Homicide and got the three count for the win.

After the main event the rest of the Righteous came out to cheer for Lethal who was visibly perplexed by the help.

Next week, a Halloween Special:

This week’s TV was fun as we seem to be moving forward with the Foundation and Vlnce Unlted feud that seems to have lasted all year long. We now have a new player in The Righteous and this can only make things interesting as we are on the road to Final Battle.  Until next week!

Top Picture: Members of The Foundation and Vlnce Unlted are ready to fight